Impact of dancehall music on society

Dancehall, like most music, is a form of self-expression. It is an art form through which the artiste can relate to events and issues of their lives. Its popularity forces its involvement into most events with its pulsating rhythms and catchy lyrics. The influence of dancehall music on society has contributed heavily to the violent and sexual behaviour and increase in drug use among youth. Dancehall music is a culture which impacts fashion, style and body language. Its elevation of sexual immorality, drug abuse and violence to the young impressionable minds, who adopt these things as part of their daily lifestyle, shows how it has influenced their behavioural pattern.

Dancehall music in today’s society exposes the minds of young people to violence. It is believed that the lyrics in the music influence violent behaviour on a subliminal level. This influences the youth to behave violently and deem it as acceptable behaviour. The more the youth listens to the music the more their actions are influenced and persuaded to be involved and even encourage violence.

The lyrics in the songs play a vital role in shaping the listeners as well as giving some insight on the kind of person behind the lyrics. Many artistes have found themselves in trouble with the law, ranging from misdemeanours to felonies, and their backgrounds and their lyrics are usually correlated.

The glorification of sexual immorality is a popular theme in dancehall music. The promotion of promiscuous behaviour and sexual acts are a common fixture in the genre and the lyrical content tends to influence its youthful listeners.

The immoral sexual behaviour of the youth is due to the stimulating effect of sexual music and they tend to gravitate towards it believing that it is acceptable conduct. In turn this raises public health concerns in regards to sexually transmitted diseases, teenage pregnancy and the human immunodeficiency virus and gives an unhealthy view on sex. Research has shown that there is a correlation between dancehall music and the proliferation of sexual activities. The findings revealed that females more than males were more likely to respond psychologically to the lyrical content of the dancehall genre and that the music is highly influential and can create negative impacts on youths, who imitate these negative acts. The evidence indicates that another negative message dancehall music is promoting are drugs and drug abuse especially that of marijuana. Dancehall music is having a negative impact on youth through drugs because various youth who listen to dancehall are smoking drugs or are being influenced to smoke drugs. The influences are derived from the lyrical content of the music or by friends who were influenced before.

The promotion of marijuana on the market for students causes them to go out of their way to smoke or sell to others to earn money and sometimes make a living. At present adolescents are forming gangs, abusing drugs, fighting, showing a lack of respect to elders and creating pornographic movies on mobile phones as well as altering uniforms to match fashion trends. These behavioural patterns not only have a massive negative impact on the academic performance of the youth but also on their health and lives. There is no doubt that the influence of music on a whole on people is phenomenal. Therefore there is no reason to doubt the extensive effect of dancehall music on the minds of the youth. There is a strong relationship between dancehall music, sexual immorality, drug abuse and violence. Music plays an important role in the development of youths and the admiration of the sexual and violent behaviour which are portrayed by dancehall artiste damages our society and the youth are at risk of falling into that lifestyle. The impact of dancehall cannot be denied. There is a need for parents to control what their children listen to while broadcasters should also regulate what they air to protect society from absorbing a behaviour that doesn’t support good morals and values.

Impact of dancehall music on society. (2016, Apr 08). Retrieved from http://studymoose.com/impact-of-dancehall-music-on-society-essay 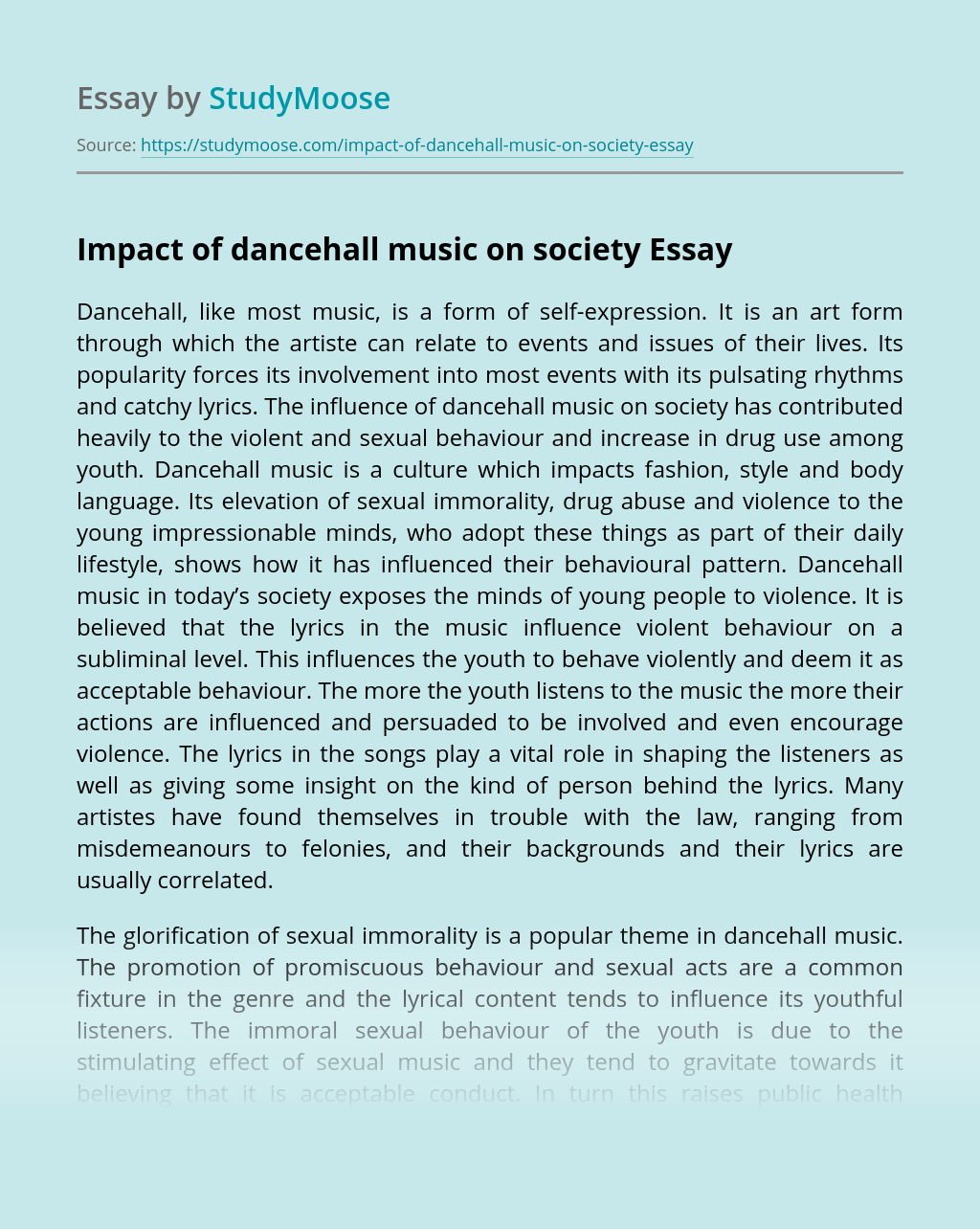 Don’t waste time
Get a verified writer to help you with Impact of dancehall music on society
Hire verified writer
$35.80 for a 2-page paper
Stay Safe, Stay Original