Is Spanking an Effective Way to Discipline Kids?

Spanking is a weird controversial topic today. Some people believe it is best not to spank your child and then there are the ones that think it is a necessity too. When it comes to my opinion on it, I say to let it happen. People think that spanking is an abusive form of the disciple but from what I can remember, it has never been painful. Spanking a child’s butt does not hurt unless the parents are hitting them as hard as they can to purposely inflict pain.

Don't use plagiarized sources. Get your custom essay on
“ Is Spanking an Effective Way to Discipline Kids? ”
Get custom paper
NEW! smart matching with writer

They are supposed to give a good amount of force to make the child think and know they did something they should not have done to condition them to not do it again. Not hit them as hard as possible to leave marks or cause a lot of pain.

After reading “Resolve to never use corporal punishment | Parenting With Pete” by Pete Herbst from NJ.com, it honestly kind of annoyed me.

Kids need discipline and what else are you going to discipline them with? Taking a toy or a cookie away from them? They need some sort of a little physical discipline and I think spanking is the perfect thing. Doesn’t hurt but it lets them know they messed up and shouldn’t do what they did again. “Parents spank their children because they believe that inflicting pain will get kids to listen and obey. The American Academy of Pediatrics disagrees. It recently completed a study of corporal punishment and announced that spanking is harmful, minimally effective and causes children to behave aggressively.

” As said in the article, they say that this sort of punishment is not effective at all which I find to not be true at all. I was spanked as a kid, which made me who I am since I didn’t do dumb things to get in trouble and I still don’t to this day. Spanking in the mind of a child is something they do not want to get so they start to learn that if they do something and they feel as if they will get spanked for it, they will not go ahead and do it. So, I don’t know why people say that spanking should not be done. And when he said that spanking is harmful, minimally effective, and causes children to behave aggressively, that is a complete lie. I have yet to see a child behave aggressively from being spanked or when they are teens either. They may scream and not be happy, but they don’t go and hit them back for it.

Another quote from the article is “Pro-spankers believe that they have the “right” to hit their children and that it is necessary to get children to be well-behaved. They believe that not spanking will result in disrespectful, spoiled kids. They mean well, but they are wrong.”. Again, I have yet to see a child become disrespectful from spanking, it is a training tool every parent should use so they don’t become disrespectful. And spoiled, only kids get spoiled when their parents just brush anything they wrong off like it never happened and when their parents buy them whatever they want whenever they ask. That has nothing to do with spanking.

Now, after reading “Most Americans Still Think Spanking is Fine. It’s Not” by Clarie Gillespie, I am even more annoyed. They have doctors on here trying to convince people to stop spanking their kids by saying that kids who were spanking when they were 3 acted more aggressive by the age of 5. To me, that just shows bad parenting and not being able to control their kids or growing up in a bad part of town and letting their kids hang out with bad influences. I’m not saying that kids need to be spanked every time they do something wrong but doing it occasionally and saying they will be spanked will definitely create some sort of trigger in their mind to not do something that will get them spanked since they don’t know which time, they do something wrong they will get spanked. Its all about suspense and creating a little fear into them doing the wrong things.

Is Spanking an Effective Way to Discipline Kids?. (2020, Nov 11). Retrieved from https://studymoose.com/is-spanking-an-effective-way-to-discipline-kids-essay 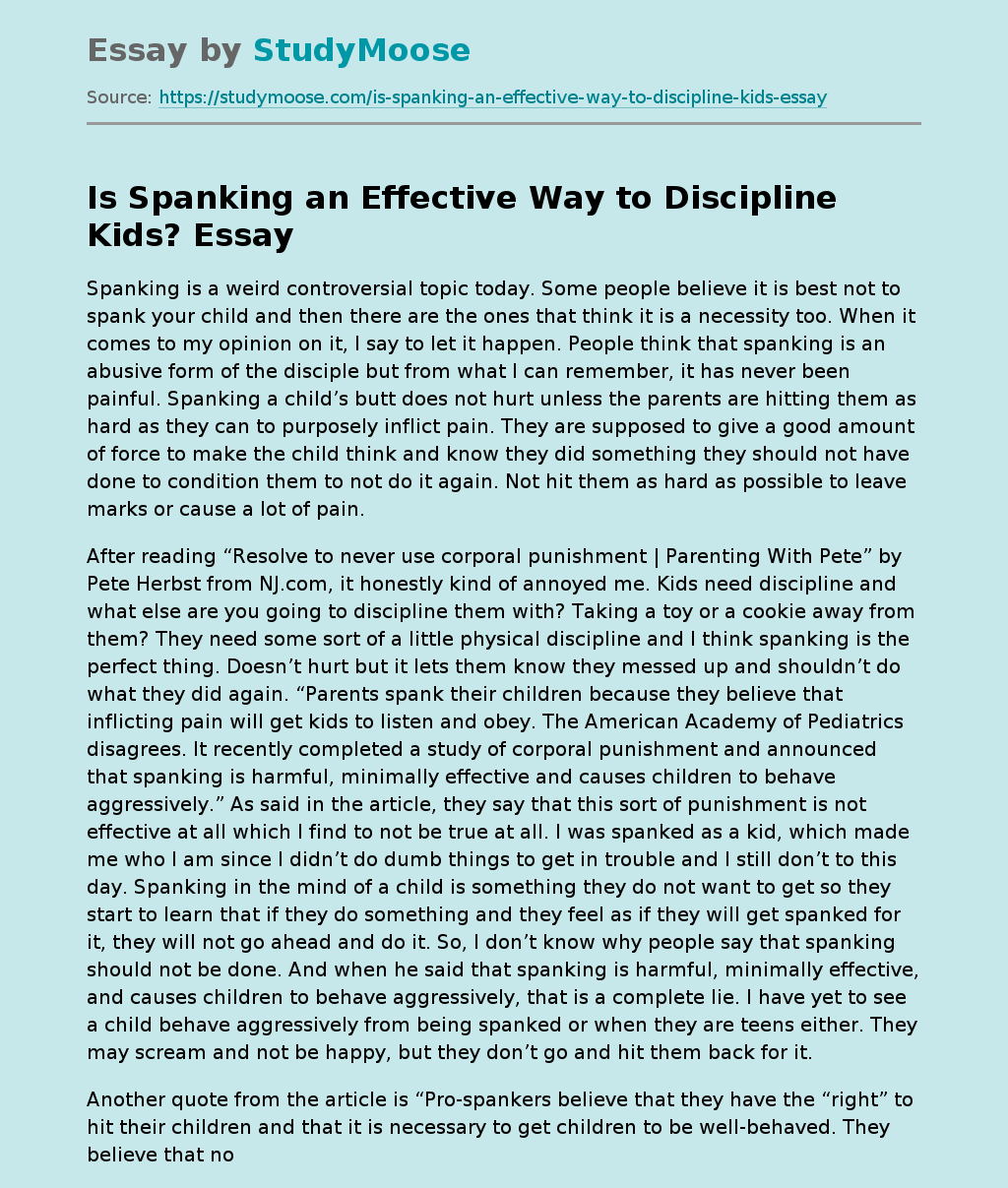