Is friar Lawrence to blame

Friar Lawrence is the local Roman Catholic priest who is also an apothecary. He is the confident of both Romeo and Juliet and plays an important role in the fate of both. He is more than aware of the family’s feuding and seems to be well thought of by everybody. Romeo respects Friar Lawrence very much and sees him as a father figure. When Romeo feels suicidal when he has just been banished from Verona, the Friar tells him to straighten up.

Don't use plagiarized sources. Get your custom essay on
“ Is friar Lawrence to blame ”
Get custom paper
NEW! smart matching with writer

`This is dear mercy, and thou seest it not. ` When Romeo confesses that he wants to marry Juliet, Friar Lawrence teases Romeo about how fickle in love he is.

`Is Rosaline, that thou didst love so dear, So soon forsaken? ` But in spite of this he still agrees to marry the young couple as he hopes it will end the family’s feuding. `For this alliance may so happy prove, To turn your households’ rancour to pure love.

` He only agreed to it because he had their best interests at heart. I don’t think he is to blame for marrying them as he did what he thought was right. And even if Friar Lawrence hadn’t married them, who’s to say that another Friar wouldn’t have married them? Romeo and Juliet both feel as if they can turn to him when they are in trouble.

We see this when Romeo has been banished, because he stabbed Tybalt and Juliet has been told that she must marry Paris.

Romeo doesn’t seem as if he is very close to either of his parents but Juliet usually has her nurse to turn to, but even the nurse, in the end the nurse rejects her too. `I think it best u married with the county. ` So in desperation each one goes to Friar Lawrence for help. Romeo is helped by being giving him a hide out in Mantua until Juliet can meet him. Juliet, being ordered to marry Paris, has gone to Friar Lawrence in desperation and has asked for help.

First of all the Friar has to help Romeo escape. He allows Romeo to spend one night with Juliet, but before dawn he must leave. It is at this time that Juliet has been told to marry Paris. So she goes to the Friar. Friar Lawrence then devises a plan that will ensure Juliet and Romeo’s happiness. In some ways this shows us the Friars cunning, we are also shown that he is quite a smart man. We know that the friar is also an apothecary, so he gives Juliet a potion, which will make Juliet look as if she is dead.

When she is taken to the family tomb, the friar will wait until she awakens, and by which time Romeo will hopefully already be there and take Juliet away. While devising this plan he still has the families’ interests at heart. He is only doing this in the hope that the two families, Montague and Capulet will reconcile. Although it could be argued, that he only helped them because he wanted to save himself. I personally don’t think so. I think he would have known that he would have had to `cover his tracks` before he married the couple.

He seems like a prudent man, one that will think things through; he would never have married them and helped them elope for selfish reasons. But the Friar did deceive both the Capulet and Montague parents. And although this was wrong, it was also, in my opinion justified. I think this because he didn’t really have much choice. If he had wanted to succeed with his plan then they would have had to be kept in the dark, there was no other way round it. If they had been told, neither parent would have agreed to let their child associate with the child of the enemy.

Priests do have the best interests of their parishes at heart and they do not lie and deceive people needlessly, but I think in this case it was allowed. Even though everything didn’t turn out the way it should have, it achieved the one thing the Friar wanted: peace between the families. And although the price paid was very high, almost too high, the motivation was honourable he genuinely didn’t act selfishly. I think everyone, in the play recognised this including the prince. `We still have known thee for a holy man. ` Friar Lawrence really was a decent man, even if his plans did go slightly wrong.

Is friar Lawrence to blame. (2017, Aug 29). Retrieved from https://studymoose.com/is-friar-lawrence-to-blame-essay 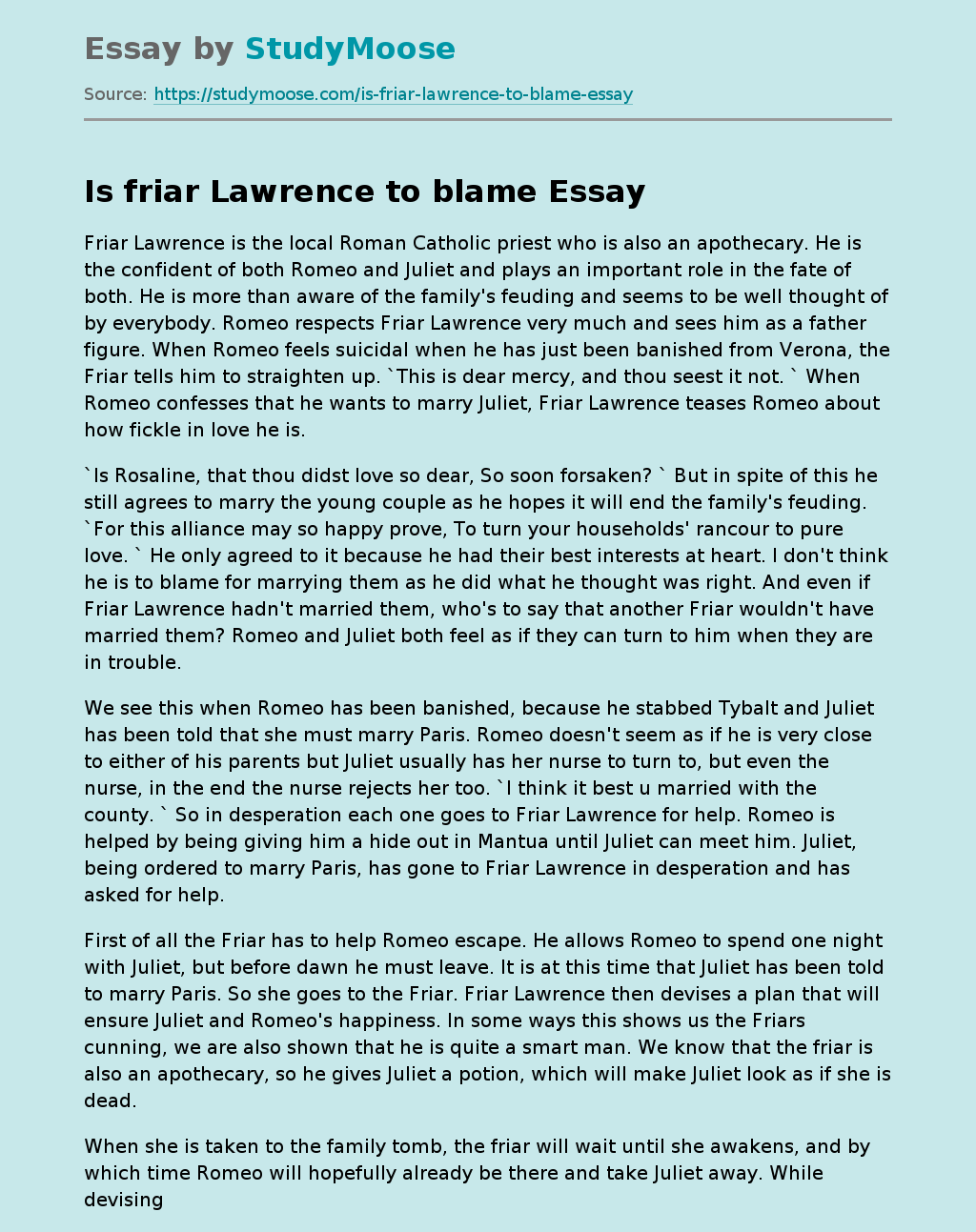