Is Enough Being Done to Preserve Languages?

Throughout history the world has consisted of many cultures and languages, some of them have been dominant, some of them have been minor. Until the 20th century global and minority languages have continued a peaceful coexistence that has provided cultural diversity for the Earth. In the present this balance has been broken and most of indigenous languages tend to disappear. Although worldwide scientists do not spare efforts to stop this extinction, there is a debate whether it is sufficient to do for saving extinct languages or not.

Don't use plagiarized sources.
Get Your Custom Essay on Is Enough Being Done to Preserve Languages? Just from $13,9/Page

Some experts suggest that some positive trends have emerged in linguistic field which can alleviate the grave situation such as master-apprentices program and large-scale documental projects. However, many scientists assert that the measures are not enough to protect languages from losing, since the rate of this process is extremely high and negative attitudes towards local languages are intensive. Therefore, this essay will contend efforts that have been made to preserve languages are inadequate because of considerable amount of adverse aspects.

There are some effective efforts have been made to save languages in the world. One of these efforts is master-apprentices program which has increased the survival of languages. In this program young people learn their own language by older generation who teach them traditional customs and craftsmanship. For example, in California Native Americans are trained basket weaving in their own native tongue, because of this method it is enough about 300 hours to begin to speak fluently (Knight, 2000). Similarly, another successful master-apprentices program has been developed by academic Leanne Hinton of Berkeley and has passed on the knowledge and skills of indigenous Native American languages to the youth. As a result, this incentive can provide to maintenance of 25 aboriginal languages in the US (Wayt-Gibbs, 2002).

The next one of efficacious ways to preserve languages is documentation which has supported fieldwork and other activities relevant to recording, documenting and archiving endangered languages. In the recent years several potent foundations have been created in order to invest considerable amount of money for these purposes. According to Wayt-Gibbs(2002), the Volkswagen foundation has helped to establish a multimedia archive in the Netherland and collect data on dozen rare languages. Moreover, owing to the Lisbet Rausing Charitable Fund, in the UK linguists will probably manage to record and save about 100 minor languages (Wayt Gibbs, 2002). In fact, these immense documentation projections can be more beneficial for science rather than common people, since the preservation does not contribute using minority languages in the real life. To sum up, due to some constructive projects that have raised interest and investment to saving endangered languages, scientists hope to stop language extinction.

However, there are an impressive number of pessimistic forecasts to further existence of linguistic variety in our planet. The greatest concern is caused by rate of dying minor languages especially in developed countries. Krauss, a linguistic professor at the University of Alaska, states that about 3 000 languages will have vanished by the end of the century. For example, only two of 20 languages known in Alaska have been learn by children (Wayt-Gibbs, 2002). Moreover, the Navajo tongue is also on the danger list because only elder people speak in this language (Knight, 2000). The similar process has occurred in Australia, where 20 of 70 Aboriginal languages were not spoken by all current generations (Wayt-Gibbs, 2002). Respectively, most scientists are concerned about the alarming situation and its development in the future.

Nevertheless, common people, especially native speakers, often have inferior attitude towards their own language. This attitude is another cause of disappearing minor languages. Owing to learning a dominate language and forgetting own language, people hope to improve their standard of living and be equal to their surroundings. This case happened to some dialects in Scottish which have given way to common English language (Wayt-Gibbs, 2002). It is obvious that an individual does not understand why he or she has to save own language when it is not useful for everyday life. Thus, the world has lost its language diversity with the exponential rate, as indigenous communities have rejected using its own language in favor of global languages in order to have better opportunities for themselves and their children.

Therefore, although some encouraging perspectives have recently appeared in linguistic fields to prevent minority languages from dying out, the process of language extinction is irreversible. Most of the evidence was presented above particularly from developed countries such as the US and Australia. Nonetheless, developing countries have also lost its indigenous languages. According to Wayt-Gibbs (2002), there are aboriginal languages in Brazil, Ivory Coast, East Timor which it is likely to be extinct in the next 100 years. How it can be seen from the examples, almost in all parts of the world there are disappearing languages and its number increase constantly. As for people who renounce their own languages in favor of a global language, they do it not always willingly, but under pressure of political and economical circumstances.

In the past the US government constrained the Navajo to reject from their language (Knight, 2000). Moreover, for business it is not also profitable to contribute language diversity that prevents from economic globalization (Knight, 2000). For these reasons the fate of most local languages are sealed. While some optimists insist that it is possible to save losing languages because of master-apprentices program, Wayt-Gibbs (2002) states that this project is not widespread, mainly in the US. In addition to that, he claims that elder speakers tend to die before they pass on their knowledge to the youth.

In regard to positive results of documentation undertaking, creation of language archives has encountered serious complication due to inconsistency of collected data and uncertainty with the period of archive‘s maintenance (Wayt-Gibbs, 2002). Even if to allow that linguists manage to collect and record all endangered languages, humanity would receive only an outline that could not revive real languages (Wayt-Gibbs, 2002). Thus, although attempts to save language variety are weak and separate, the world prefers to use several dominant languages. Perhaps, it is worth reflecting to native speakers which language they will choose in the future and they will not loss probably only their own language, but their own lifestyle and throughway.

In conclusion, minor languages disappear extremely quickly throughout the world and most non-global language speakers consider their language as useless. Despite of some earnest attempts to transmit indigenous languages from elder people to new generation and save minor languages by means of its documentation, these projects are not sufficient to surviving these languages as the educational program has not spread widely and documentation has not manage to revitalize languages, only collect and record some of them. As a result, by the end of the century most minority languages will have vanished. Nowadays, the cost which people pay for vague prosperity and social safety seems no high, nevertheless, in the future they may realize that they lost not only their language and their identity.

Is Enough Being Done to Preserve Languages?. (2017, Jun 03). Retrieved from https://studymoose.com/is-enough-being-done-to-preserve-languages-essay 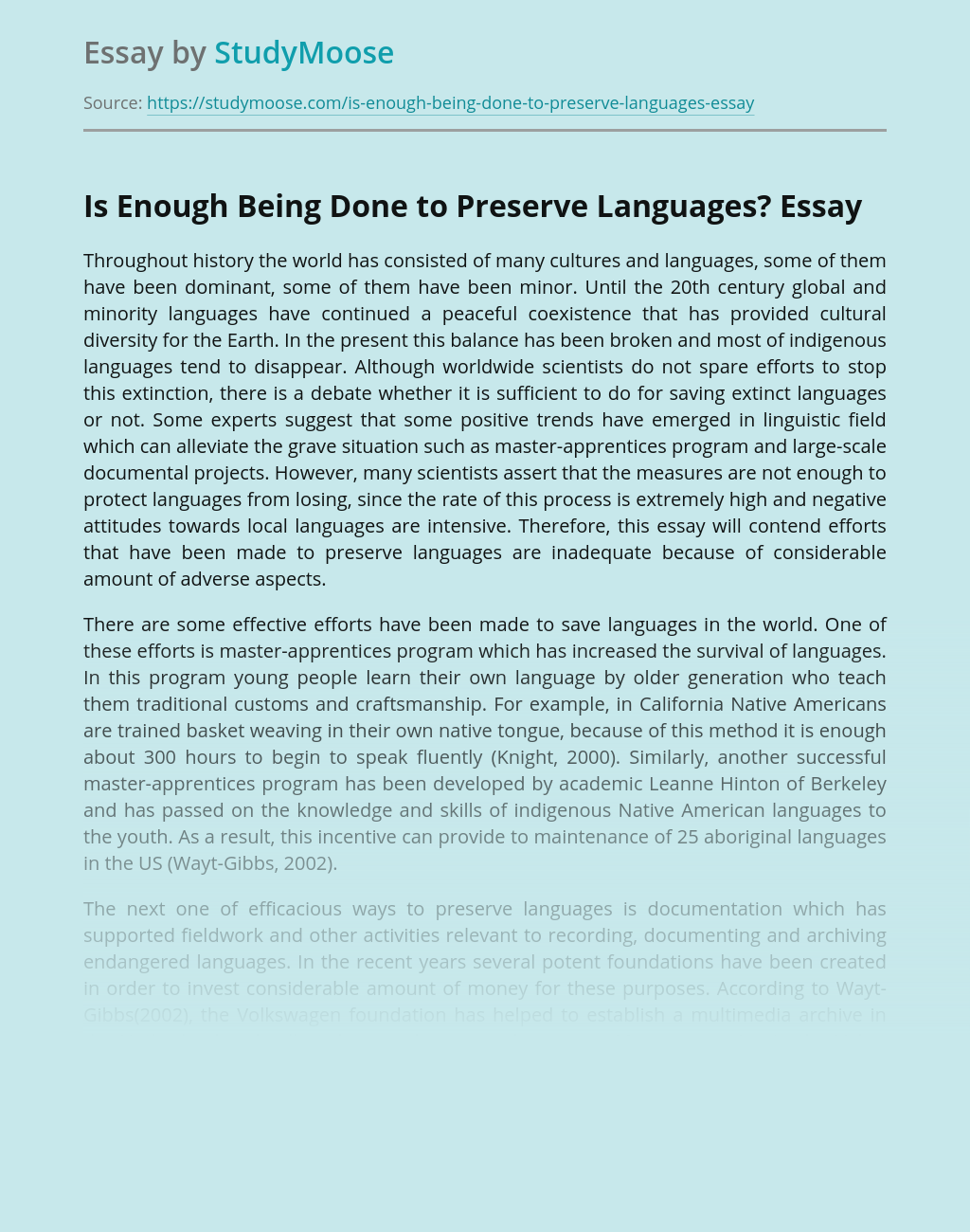 Explain how multi agency teams work together to support speech, language and communication.

Rate this post There are a number of professionals that come into contact with each other if a child has needs with speech, language and communication and require support from different areas. E.g. a social worker, SEN Officer, teacher and parent can work together to improve the life of a child or young person. They...

Disadvantage of Bilingualism for Language Acquisition

Rate this post I need to confess that bilingualism has several benefits. Nevertheless, tackling this concern, the linguistic conditions in which kids are raised to be able to speak two languages equally well ought to be also considered. Lots of linguists underline that while introducing the 2nd language to student, his/her direct exposure to a...

Get Essay
﻿Urdu - The Origin and History of the Language

Rate this post The term Urdu derives from a Turkish word ordu meaning camp or army. The Urdu languagedeveloped between the Muslim soldiers of the Mughals armies who belonged to various ethnicities like Turks, Arabs, Persians, Pathans, Balochis, Rajputs, Jats and Afghans. These soldiers lived in close contact with each other and communicated in different...

Rate this post Japanese designed site meant for starters in English language. In it are so many great links that are not only useful but also interesting to kids and other ESL learners. The reason for making it interesting is that kids may get bored if the material is not appealing to them. This site...

Ferdinand de Saussure and Onject of Study: a Brief Illustration

Rate this post Ferdinand de Saussure was a Swiss linguist who laid the foundation on the ideas of structure in the study of language. His Book Course in General Linguistics that was published in 1916 has detailed all that he claimed to be his views. In his book Saussure shows us a clear reaction against...