Is College For Everyone?

Since the first GI Bill was passed after World War II universities have been steadily increasing. Currently there are more than 4000 college like institutions in the United States. Public policy has been making higher education more reachable for example by creating federal student loan programs so everyone has a chance to attend college. But recently we have seen the cost of a four year degree drastically increase because Americans are seeing college as an obligation. “On “Real Education”” Robert T.

Don't use plagiarized sources. Get your custom essay on
“ Is College For Everyone? ”
Get custom paper
NEW! smart matching with writer

“Is College for Everyone” Pharinet is arguing that college is not for everyone. He states that there is too many students enrolled in school that don’t belong there. Roberts’s essay “On “Real Education”” is more persuasive because, not only did his writing appear on InsideHigherEd. com making him a more credible author but also because he argues his stance on college is for everyone using statistics and a believable explanation to back them up.

The US Department of Labor has reported that America needs more college graduates to keep up with all the other nations in the global economy. Robert states that by the end of the presidents first term, which is already over, that The US will have 3 million more jobs that require bachelor’s degree and we don’t have enough college graduates to fill them. We need more health care workers, teachers, software engineers and manufacturing jobs, all of which require college. Those whom choose not to go to college have much fewer employment options.

Robert makes a strong point when he says that American companies are looking for new ways to compete, and because of this without some sort of secondary degree you will have consistent struggle to pay for just the basic to live. Robert grabs the reader’s consideration through the use of pathos, saying that additionally people with postsecondary degrees tend to be more healthy, more engaged in their community, a decreased chance of being involved in crime, more productive throughout there working life, and even more philanthropic.

Pharinet thinks that the most common issue with college is that students are not yet ready for the academic and financial challenges. He claims that students find themselves trying to work full time and do to school full time and before long students decide they need to work and drop their status to a part time student. Through the use of pathos Pharinet asks his readers to consider a very valid point, if college is for everyone then why do we rely on SAT scores and high school transcripts? And why doesn’t every school have an admissions policy?

Then followed those questions with the answer that college is not for everyone. There is no real desire for learning. Individuals just go to college to earn a degree to settle down into a job with decent pay. Using pathos again Pharinet explains that when this kind of person enters the work force are they going to lack motivation in there career because of the only reason for wanting the career was for the money. When comparing these to essays, you can clearly see that there are two completely different beliefs. Robert believes that college is for everyone where Pharinet believes that college is not for everyone.

Robert had a more persuasive argument because he established a good ethos, Robert uses facts and professional opinions to back his argument, whereas Pharinet uses his own personal opinions to create his blog. Robert uses much more logos then he does pathos, Pharinet used much more pathos then he did logos. Neither of the writings use firsthand experience, we don’t know whether or not Pharinet and Robert went to college. I found both the organization and use of evidence effective in both essays. Both essays use good strong points to back up their arguments and both essays were persuasive.

Is College For Everyone?. (2016, Sep 29). Retrieved from https://studymoose.com/is-college-for-everyone-essay 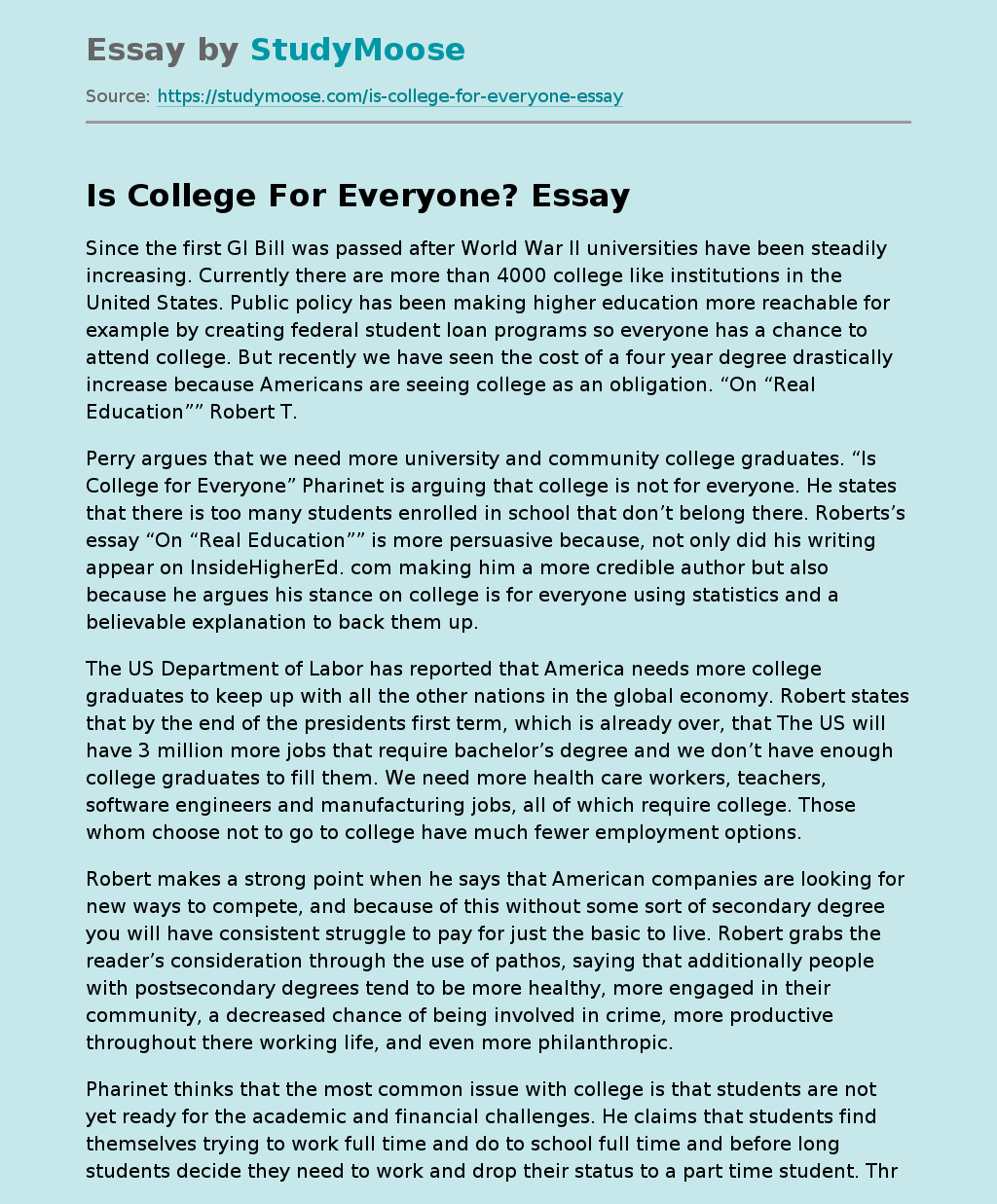