The discussions and research about the term “learning style” at the higher education level are controversial and this has led to its use being elusive. Although many academics accept that it can be beneficial to the teaching/ learning process, they generally support its use in the lower levels of education such as in Primary and secondary schools.

However, more recently, there has been a growing body of research on adult learners that suggests that increased learning gains can be achieved when instruction is designed with students’ learning styles in mind (Larkin-Hein & Budny, 2000, as cited in Garner- O’neale & Harrison, 2013).

Don't use plagiarized sources. Get your custom essay on
“ Learning Style and Higher Education ”
Get custom paper
NEW! smart matching with writer

In fact, a study of Higher Education faculty in the USA showed that 64% agreed with the statement “Does teaching to a student’s learning style enhance learning?”(Dandy& Bendersky, 2014 cited in Newton & Miah, 2017). Another study done in the UK found that although 58% of academics in UK Higher Education believe that Learning Styles are eﬀective, only about a third actually uses them (Newton &Miah, 2017).

Proficient in: Academic And Career Goals

Nevertheless, there has been overwhelming endorsement for the use of learning styles in higher education in recent literature, despite the lack of evidence that learning style influences academic achievement (Newton, 2015, cited in Newton and Miah, 2017).

Newton and Miah, (2017) suggested that most of this endorsement was implicit and most of the research did not actually test Learning Styles rather proceeded on the assumption that their use was a ‘good thing’. In fact, they reported in their research that 90% of academics agreed that there is a basic conceptual ﬂaw with Learning Styles Theory.

They further claimed that this mismatch between the empirical evidence and belief in learning Styles, alongside the persistence of Learning Styles in the wider literature, has led to tension and controversy, and even labeling it a ‘myth”. However, Fleming (2012) rebutted by saying that “Absence of evidence is not evidence of absence”. He went on to say that lack of evidence means what it says – at this point in time, we do not have any reliable, valid research that would predict that knowing one’s learning style is beneficial for learning.

Hence, there is need for solid research to provide empirical evidence to debunk the controversy of learning styles.

Students’ Awareness of their learning style

It has long agreed that humans are not all the same; even identical twins were found to have differences. Thus, it’s not surprising that researchers agreed that we do not all learn the same way. Each person has a unique way of learning referred to as their learning style. Some scholars are convinced that learning style can be beneficial to the learning process, and therefore suggest that it is of paramount importance that learners become aware and understand their learning style.

Hence, knowing one’s learning style is then a necessary precursor to understanding… how one learns (Fleming, 2012).In researches done by Dunn, et. al., (2009) and Khanal, Shah, and Koirala (2014), students claimed that knowing their learning styles helped their academic progress. Hood (1995) also agreed that students who knew their learning styles did better academically than their peers (cited in Surgenor, 2010).

On the other hand, some educators believe that identifying students’ learning styles is another form of labeling. Brent and Felder (2005) rebutted; they claimed that identifying students learning styles will help educators tailor instructions to fit preference. Clarke, (2008) also agreed that learning style can be used to adjust or fine-tune fundamental learning strategies (cited in Surgenor, 2010), and this may enhance academic achievement. According to Coffield et al, (2004), the appeal of learning styles lies in the potential that students may become more motivated to learn if they’re aware of their own strengths and weaknesses as learners(cited by Surgenor, 2010).

It was suggested by researchers that everyone has a learning style. Learners may prefer to learn by visual, auditory, reading or kinaesthetic modes. A VARK website surveyed 45,826 respondents and found that 27.8% are kinaesthetic, 27.4% read/write, 24.5% aural, and 20.5% visual (cited in Khanal, Shah & Koirala, 2014). Fleming (2007) also conducted a survey and found from VARK determination that thousands of college-aged students preferred auditory and kinaesthetic modes of learning (cited in Johnson, 2009, Khanal, Shah& Koirala, 2014). He however suggested that a single preference is indicative of the strength of one of the modalities, not an indication that the other three VARK modalities do not exist. Even a learner with a very strong kinaesthetic preference will still have scores for the other three modes and be prepared to use those when they suit the context of their learning (cited in Othman & Amiruddin, 2010).

Thus, in recent times, Fleming posited that learners can also prefer multiple modes, and this he referred to as bimodal (VA, RK), tri-modal (ARK, VAK), quad-modal (VARK), or simply multimodal. He further claimed that it is unlikely that any population with VARK data will exhibit more than 40% as having a single preference (cited in Othman & Amiruddin, 2010). Khanal, Shah, and Koirala, (2014) in their study found this to be true. They retrieved and reviewed 20 full-text research papers in most of parts of the world the studies showed that multimodal learning style was the predominant one over unimodal. Further, the multimodal quad model was the most preferred. In the unimodal presentation, most preferred one is a kinaesthetic type of learning along with visual, aural, and read-write to less extent.

Paradoxically, Peyman et al (2014) in their study reported that a greater majority of students preferring only one learning style was found to be auditory or aural, and for students with bimodal, it was found that 46% of the students preferred the styles kinaesthetic and visual. The learning styles kinaesthetic, visual and aural made up the highest tri-modal preference. Fleming (1995) also found that the most commonly used model in the learning process is the aural mode. He further mentioned that in a higher-education system, the kinaesthetic mode has the least tendency molded by teachers in teaching (cited in Othman & Amiruddin, 2010).

Thus, it is an advantage to anyone who has more than one type of learning style, because those individuals possess more flexible views and acceptance of their learning environment (cited in Othman & Amiruddin, 2010). It is then vital that instruction be multimodal so that all students can be taught in their preferred learning style and benefit from the teaching/ learning process. Felder & Brent,( 2005) agreed that the goal of instruction should be to equip students with the skills associated with every learning style category, regardless of students personal preference, since they will need all of those skills to functions effectively as professional

Since its conception, the theory of learning style and its application to learning has been sought. Theorists have been exploring the application of the concept learning styles to students’ academic performance and achievement, and are finding varying results (Abidin, Rezaee, Abdullah, & Singh, 2011; Warn, 2009; Komarraju, Karau, Schmeck, & Avdic, 2011 cited in Corbin, 2017). According to Corbin, (2017), the differ findings in the literature with regards to the relationship between students’ learning styles and academic performance are indeed ubiquitous. However, Hatami (2013) emphasizes that the research on the relationships between the learning styles and learning outcomes has yielded contradictory results (cited in Abu-Ayyash and Assaf, 2016).

Hence, Coffield, Moseley, Hall and Ecclestene (2009 ), concluded that there is little good evidence to suggest that teaching influenced by the idea of learning styles has a significant effect on achievement or motivation(cited in Surgenor, 2010). While Abu-Ayyash and Assaf, (2016) have agreed that a relationship exists between learning style and academic achievement, but it is weak. Ellis (2008) went on to say that “at the moment there are few general conclusions that can be drawn from the research on learning style” (cited in Abu-Ayyash and Assaf, 2016). For that reason, there is a need for more comprehensive research to define the relationship between learning style and academic achievement. 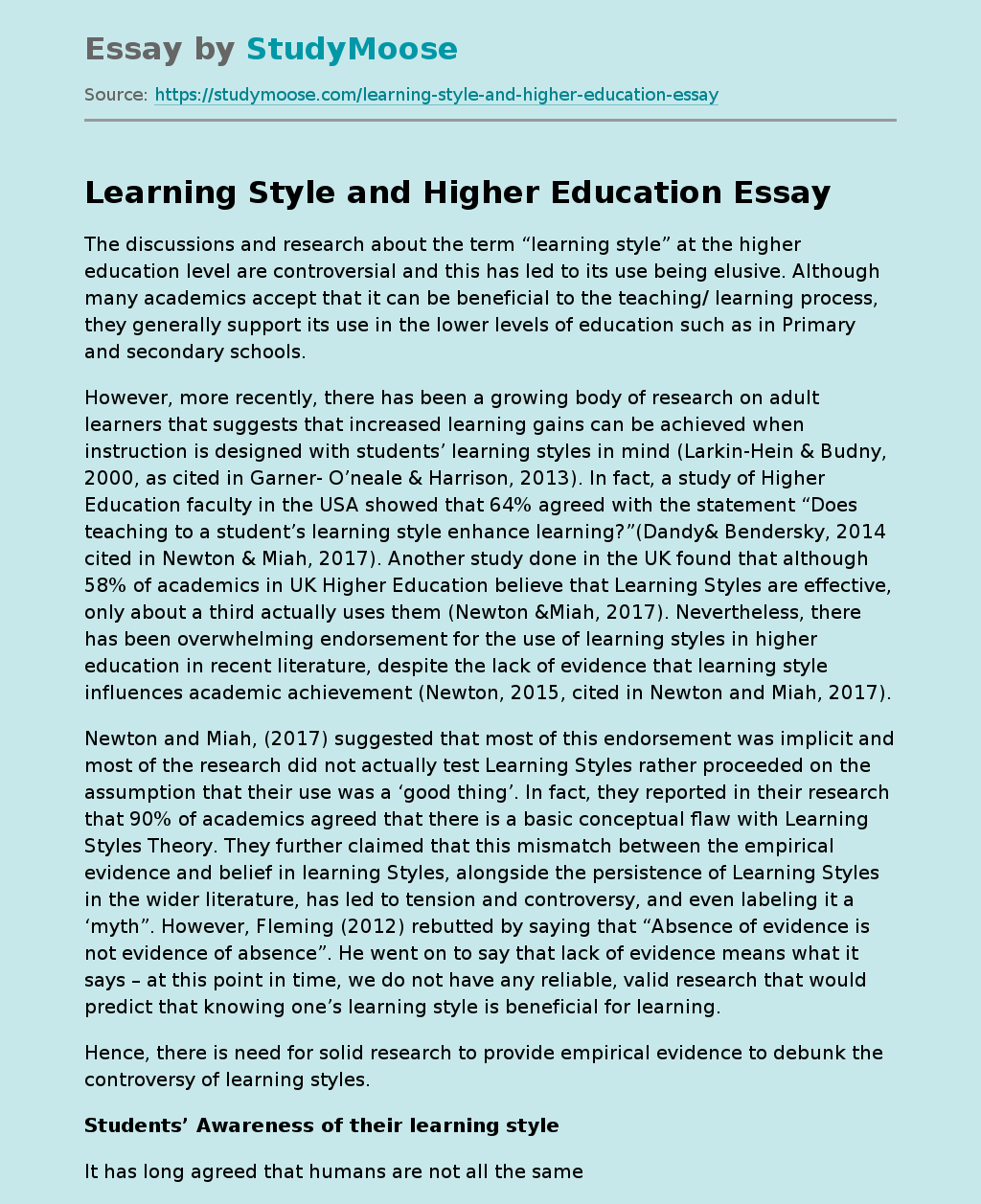