Academic dishonesty is a vice that is plaguing higher education in today’s society. While lecturers and exam invigilators always seem to be a step behind in catching the culprits, the techniques being invented by the students to beat the system can almost be viewed with grim fascination. The emphasis that has been put on higher education when it comes to job status has totally skewed the moral compass of students and people who were of “respected character” in their high schools are usually at pains when explaining why the chose to cheat; this is usually after they are caught.

Don't use plagiarized sources. Get your custom essay on
“ Effects of Academic Dishonesty on Higher Education ”
Get custom paper
NEW! smart matching with writer

The challenges being presented to the young boys and girls in our corridors of higher learning can be tackled the same way these students made the grades in high school. It’s all about commitment and hard work. (Anderman et al, 2007) Reasons for Cheating Students will cheat if they are not adequately prepared or if they believe regardless of their understanding of the course content, they are just not going to pass.

Looking at the first reason, failure to adequately prepare for a CAT or an exam yet one has been given all the material can only be blamed on one’s negligence.

On the second reason, the students may have reason to believe that there will be a disconnect between the questions being asked and the material they have studied. They could base their suspicions on the previous practices of these particular lecturer or they just do not have faith on the content they have been taught.

This rarely happens but what students do not understand is it is not the lecturer’s role to “spoon-feed” them in the entire course outline. One of the expectations society has on graduates is that one should at least be able to conduct a research independently.

Part of the content would therefore not be given in class and the lecturer will expect the students to conduct their own fact-finding missions. Therefore, one should not vilify a lecturer for asking a question that one wasn’t familiar with before looking at the course outline. (Callahan, 2004) Plagiarism, Fabrication and Deception The kind of cheating looked at above focuses on exam-based mode of evaluations. Research work conducted by students or even university faculty has not been spared this vice either.

This kind of cheating is characterized by plagiarism, fabrication and deception. Plagiarism is the most common especially with undergraduate students. The internet has proved to be quite resourceful with information about pretty much anything being just a mouse click away. Stiff penalties like being expelled or suspended from the university do exist but there are still a few brave souls who believe they can get away with it. When one moves to the post-graduate and doctorate levels, cases of plagiarism are quite minimal.

Having one’s name tarnished with plagiarism is a tag that will follow you for the rest of your career. (Bowman, 2004, p 25) The few cases of academic dishonesty reported usually arise from intentionally presenting false data. Research work is a time consuming process that can take months and even years. It can be quite unfortunate if at the end of your research, the experimental results do not match your hypothesis. Occasionally, some people prefer to fabricate their results instead of repeating the entire process or admitting that their research was inconclusive.

You might get away with it if the experts in that particular field are few but the fall-out that would follow when you are discovered has proven to be the greatest deterrent. (Bowman, 2004) Studies in the Unites States show that “70% of students in high school have cheated” (Anderman et al, 2007) meaning that this vice was not suddenly acquired when these students joined university. It has moved to a point where when students are caught cheating, they are probably mad at themselves because they were caught instead of having remorse.

The likelihood that you might actually be caught should be the greatest deterrent to cheating; not the penalty received after you are caught. You will only worry about the penalty if you are not sure whether you will get away with it. (Anderman et al, 2007) Effects on Higher Education Cheating has a negative effect on higher education in that the entire credibility of the system is questioned. Take for instance a student who actively cheated during his time at a particular business school somehow sneaks through the cracks in the system and is employed in the job market.

Research has shown a majority of people caught practicing unsound business practices like embezzling of funds most likely participated in academic dishonesty during their time in university. The embarrassment such a person will bring to their learning institution is immeasurable. Furthermore, the credibility of students who passed through this business school will also be brought into question. It is fair to say that a looted business enterprise will think twice before employing someone from that disgraced business school.

Majority of universities rely on grants and research funds to run their expensive programs. While funds from local authorities, student fees or even the federal government might be enough to run some programs, a large majority of courses rely on huge cash returns that research programs produce. All this can change if the entire higher education system is brought into disrepute due to widespread cases of cheating. Currently, few universities dare to admit that the problem is more widespread than it is reported. They are aware of the vice and admit to it being prevalent mostly in the undergraduate level.

Today, the cost of hiring a university to perform a research on your behalf is a luxury enjoyed by companies or institutions that can afford the high costs. The justification for these high costs is attributed to the level of skill required to conduct this research; and this skills can only be found at our institutions of higher learning. This house of cards could probably come tumbling down if the current levels of academic dishonesty continue persisting. The research work will continue but the revenue being generated will decline.

Interested parties will argue that the widespread cases of cheating in your university do not justify the excessive research fees being charged. (Callahan, 2004, p 72) Most academic scholars will never admit it but the prestige that comes with obtaining qualifications from a recognized institution of higher learning played a part when they decided to pursue higher education. Rock stars and established sportsmen and women keep returning to universities to finish their degree courses regardless of the amount of wealth they have amassed.

It’s not like getting a degree guarantees you a better life insurance package or longer life expectancy; it is what the degree represents. Ironically, cheaters also realize this. A university degree is a rubberstamp of knowledge in today’s society. Some siblings have complained that their fellow brothers or sisters are held in higher regard by their parents or relatives just because they attended a university (a prestigious one). Is this system fair? Yes it is because being selected to join a university and successfully completing one’s course is not an easy affair.

I believe those who have managed this feat deserve every accolade they receive. All this good is however eroded by cases of academic dishonesty. Such people end up tarnishing the names of the institutions plus the people who will pass through its corridors long after they are gone. There is a class system in every society and a large majority of them are segregated by wealth accrued or the level of education attained. Without getting into the pros and cons of a society divided by class, the reality is in every society there will have to be leaders and followers; you cannot have both.

A person’s education status has been a barometer for today’s leader. Changing this due to some inept practices of some students who were caught with crib notes does seem far-fetched but is plausible if the problem becomes endemic. (Bowman, 2004, p 26) Conclusion At its current “manageable levels” academic dishonesty needs to be wiped out since it does affect the morale of students who have chosen to walk the straight path yet they are lagging behind their counterparts who are cheating. The prestige of higher education will be preserved only if its members respect its ideals and principles. 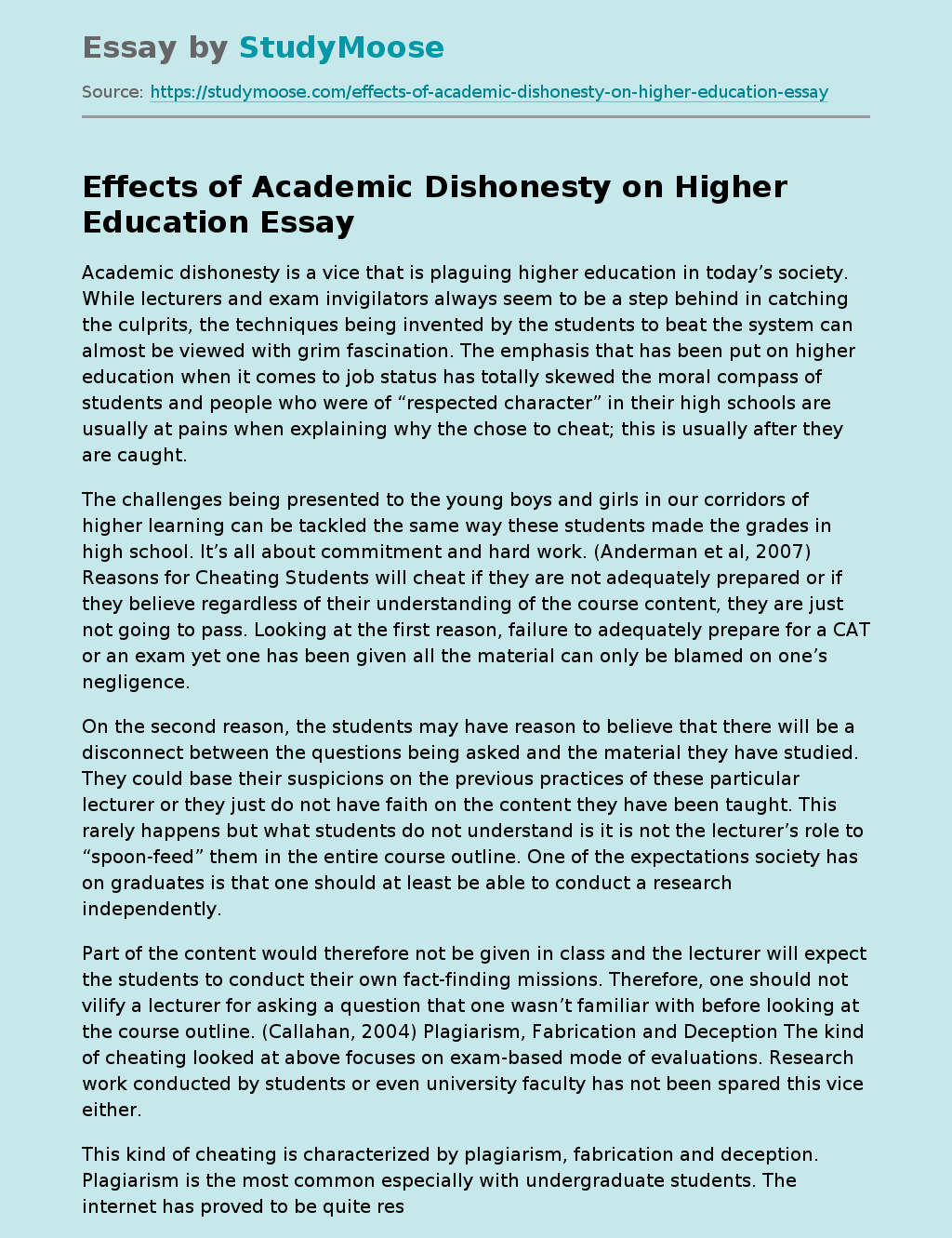