This case involved Reid, who was a superintendent with District of Columbia jail and Mrs. Clarice Covert, who was a military dependent. While residing in England at an airbase, she was tried and thereafter convicted for the murder of her husband by court-martial. Mrs. Covert’s husband worked with United States Air force as a sergeant; however, Mrs. Covert was not an armed forces member. The trial and conviction of Mrs. Covert in the united states by the court martial was authorized by United states code of the military justice under article 2(11).

Don't use plagiarized sources.
Get Your Custom Essay on IRAC method: Rule and Analysis Just from $13,9/Page

She was, therefore, sentenced to life imprisonment where she was supposed to serve this sentence in a federal prison in United States. However, she appealed the case, and she was taken to District of Columbia jail awaiting retrial by the court martial in Washington, D.C at an airbase after her conviction being set aside. It is at the federal district court that she petitioned for a writ of the habeas corpus claiming that her constitutional rights under Fifth and Sixth Amendments were being violated because of her conviction by the military authorities (“Reid V.

Mrs. Covert termed this conviction to be unconstitutional under article2 (11) stating that she was not a member of armed forces and therefore not subject to the military jurisdiction. The district court ruled out the case that a civilian was warranted to have a civilian trial and in this regard this court granted Mrs. Covert her petition. The government appealed to the Supreme Court directly in the United States. The Supreme Court gave a ruling that military trial of Mrs. Covert was constitutional and that the trial by a jury that was a constitutional right did not apply for those American citizens, who were being tried in the foreign lands (“Reid V. Covert,” 2014). According to the court’s ruling, the congress was within its constitutional mandate and that by any means it could provide for trial through any means it deemed fit as long as that means were consistent and reasonable with the due process. A lengthy reservation was issued by Justice Felix Frankfurter, and Justices William O. Douglas and Hugo L. Black together with chief justice Earl Warren issued a dissent that was strong. The court granted a petition for the rehearing subsequently. They held that those Americans citizens who were outside the territorial jurisdiction of United States still retain the protections warranted by the constitution of the United States. Therefore, the decision that was granting habeas corpus to Mrs. Covet was affirmed accordingly. In the case of a treaty which tends to conflict with any subsequent congressional act, congressional act in such a case prevails over the treaty except when it violates the constitution (“Reid V. Covert,” 2014).

Mrs. Covert argued that Article 2 (11) is supposed to be geographically restricted and thus military jurisdiction which was over her expired when she was returned to the United States. Additionally she also argued that as a civilian, she was not supposed to be subjected to the code, because under Article 2(7) she was not in custody of the armed forces. The chief justice together with the two justices rejected the notion that United States acts against those citizens who are abroad and that it can do without any restrictions from the Bill of Rights. They stated that United States is a creature of constitution entirely and in this regard all the authority and power are derived from the constitution. Therefore, USA can act according to the limitations which are imposed by the constitution. Thus, in a case where United States’ government wants to punish a particular citizen who is out of the country, the shield which Bill of Rights together with other components of the constitution that seeks to protect his liberty and life are not supposed to be ignored just for the mere reason that he or she is in another country (“Reid V. Covert Case Brief,” 2011).

Conclusion Although majority of the courts concurred with the final outcome, they did so for very different reasons. According to justice Felix Frankfurter making a ruling that Mrs. Covert trial and conviction were unconstitutional merely on the fact that she was not an armed forces member displayed too narrow a review. Justice Felix Frankfurter stated that the determination of this case necessitated the court to review the constitution thoroughly in its entirety instead of merely assessing a single provision which grants the congress the power of regulating the naval forces and the nation’s land. According to his opinion, the court is supposed to assess all the factors which are involved so as to decide whether the military dependents are subject to court-martial jurisdiction when they are involved with capital cases. In this regard, he argued that capital cases require full article III trial while the petty offenses by the military dependant are not supposed does not. Therefore, his advice was adoption of case-by-case approach. Justice john Marshall also concurred with Frankfurter. He first argued that military dependents that were overseas were bearing a rational correlation to the armed forces and therefore they could be subjected to the court martial. He later advocated for the approach of case-by-case. Justice Tom C. Clark provided a substantial weight towards the historical practice. Clark argued that allowing such cases to be tried in federal court system would pave way for petty offenses which would have many adverse consequences such as delays, incurring needless cost, and also disruption. Therefore, he also recommended use of case-by case approach. In the Supreme Court history, Reid v. covert is the only case in which on rehearing the court reversed itself (“Reid V. Covert,” 1957). 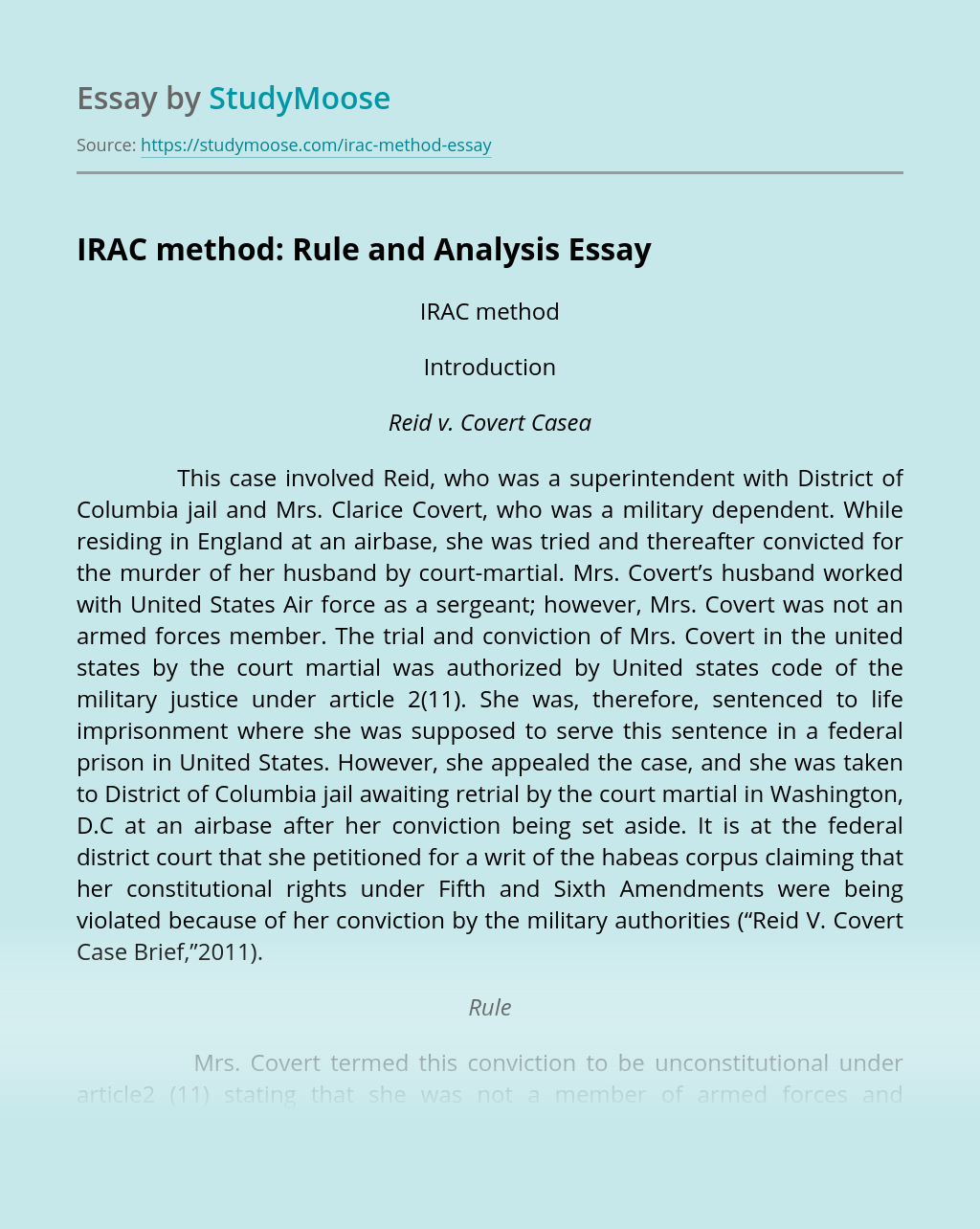 IRAC method Introduction Reid v. Covert Casea             This case involved Reid, who was a superintendent with District of Columbia jail and Mrs. Clarice Covert, who was a military dependent. While residing in England at an airbase, she was tried and thereafter convicted for the murder of her husband by court-martial. Mrs. Covert’s husband worked...

View sample
Citizenship in the nation

1.Explain what citizenship in the nation means and what it takes to be a good citizen of this country. Discuss the rights, duties, and obligations of a responsible and active American citizen. 2.Do TWO of the following: a. Visit a place that is listed as a National Historic Landmark or that is on the National...

In Graham’s junior high school, what factors determined where students sat? The integration between students of the same ethnic background. For example page 350 paragraph 14 states athletes sat with athletes, there was an Italian table, a Jewish girls’ table, a Jewish boys’ table, a table of kids who were into heavy metal music and...

View sample
Key Points for the Defense of American Exceptionalism