The reason we have rules in life are simple, to keep order when there is chaos and to guide our behavior in a way that is acceptable by society’s standards. The reason we have laws and procedures to carry out those laws are simple as well, to keep the government from infringing on its citizen’s constitutional rights. If the government was to rid itself of the exclusionary rule, then it has the potential to be infringing on its citizens rights.

Turn in your highest-quality paper
Get a qualified writer to help you with
“ Exclusionary Rule Pros and Cons ”
Get high-quality paper
NEW! AI matching with writer

The government could essentially walk into anyone who is suspected of a crime’s house and seize whatever they feel is evidence.

The Fifth and Fourteenth Amendments guarantee due process of law in administering identification procedures.

In this case the court announced a weaker version of the exclusionary rule that only excluded self incriminating testimony that was compelled in violation of the Fifth Amendment. In 1914 under the Fourth Amendment prohibiting unreasonable search and seizures, the United States Supreme Court announced the exclusionary rule, in the case Weeks v. United States. In this case Fremont Weeks was a worker in Union Station Kansas City, when the local police department conducted an illegal search by breaking into his house without a warrant.

According to the book, during the search the police seized all of Weeks “books, letters, money, papers, notes, evidences of indebtedness, stock certificates, insurance policies, deeds, abstracts of title, bonds, candies clothes, and other property” (Samaha, 2012, p. 337). After all the evidence was collected and analyzed by the local police department accompanied by the United States Marshal Service arrested Weeks at his work and charged him with illegal gambling. Weeks’ motion to return the seized evidence was denied by a trial court judge.

Weeks was subsequently convicted and sentenced to a fine and imprisonment. The U. S. Supreme Court on appeal by Weeks reversed the conviction and ordered the return of all of his seized documents. The U. S. Supreme Court ruled that the government violated Weeks fourth amendment right against unreasonable searches and seizures when they broke into his house. Thus the exclusionary rule was born, but it only applied to federal law enforcement, not the states constitutions. It wasn’t until Mapp v. Ohio (1961) that the United States Supreme court extended the exclusionary rule to all states.

They are saying is that the need for the rule is to deter illegal techniques that police use to obtain evidence, not to simply give more rights to the defendant. As Estreicher and Weick pointed out, “all of the cases since Wolf requiring the exclusion of illegal evidence have been base on the necessity for an effective deterrent to illegal police action” (Estreicher & Weick, 2010, p. 4). So instead of looking at the exclusionary rule as the end-all-right that citizens are guaranteed to have illegally seized incriminating evidence thrown out of court, instead use it as an end-all of illegal tactics police use to gain said evidence.

Opponents also argue that the exclusionary rule is not mentioned anywhere in U. S. Constitution, it is also absent from any of the framers of the Constitution writings. Another concern is that the rule really has no effect on the innocent. As Lynch put it best, “the exclusionary rule typically shields persons who otherwise probably would be convicted, it has no bearing on innocent people who have wrongly been subjected to search and seizure” (Lynch, 2000, p. 748).

There is also the high possibility that on a daily basis many innocent people’s automobiles, homes, and other property are illegally searched and come up with nothing. We never hear anything about these instances. Opponents also find it hard to prove that the police actions were deliberate. “Stating that the proper focus of the exclusionary rule analysis should be on the police conduct rather than the defendant’s crime, does not fully resolve the problem of determining what police conduct will count as “sufficiently deliberate” or “sufficiently culpable” (Josephson, 2009, p. 99). It is hard to justify if law enforcement agencies were acting deliberately to seize illegal evidence. “The proponents of the exclusionary rule have many sound logical arguments. Justice Potter Stewart exposed the faulty reasoning underlying the objection in 1983: “Much of the criticism leveled at the exclusionary rule is misdirected; it is more properly directed at the fourth amendment itself. It is true that, as many observers have charged, the effect of the rule is to deprive the courts of extremely relevant, often direct evidence of the guilt of the defendant.

But these same critics sometimes fail to acknowledge that, in many instances the same extremely relevant evidence would not have been obtained had the police officer complied with the command s of the fourth amendment in the first place… The inevitable result of the Constitution’s prohibition against unreasonable searches and seizures and its requirement that no warrant shall issue but upon probable cause is that police officers who obey its strictures will catch fewer criminals.

That is not political outcome impressed upon an unwilling citizenry by unbeknighted judges. It the price the framers anticipated and were willing to pay to ensure the sanctity of the person, the home, and the property against unrestrained governmental power” (Lynch, 2000, pp. 748-749). Supporters also point out that law enforcement has to operate within the laws that govern them. These laws include the use of a warrant to search and seize evidence of private citizen’s homes, cars, offices, and other property.

It is the responsibility of law enforcement agencies to obtain a warrant, not the responsibility of the citizen. If we allow the use of evidence seized in warrantless searches, then what is to stop the agencies from doing other unlawful tactics? With all the pros and cons of the exclusionary rule it is hard to take a logical stance as to whether to support or oppose it. There are alternative proposals for the exclusionary room. The meaning is of the exclusionary rule is different than what it is actually intended to be used for.

According to Lafave the exclusionary rule was intended for use, “only if it can be said that the law enforcement officer had knowledge, or may properly be charged with knowledge, that the search was unconstitutional under the Fourth Amendment” (Lafave, 2009, p. 764). So what we need to be looking at is not how to get more rights or take away rights of the defendants, but how to punish and deter law enforcement agencies from using illegal evidence gathering techniques. We need to be looking at how to put laws into place that will punish the police departments.

One way to punish the police departments is to take away federal money. Everyone knows most police departments receive federal grants to all sorts of things. If the government were to cancel grant funding to police departments who have violated the new set of laws that require proper evidence collection techniques this would be a possible deterrent. Another argument is that, “the exclusionary rule is inconsistent with the common law. Under the common law, a criminal defendant cannot object to the used of illegally obtained evidence at trial” (Lynch, 2000, p. 746).

Another way to fix this is to ban all the evidence that was seized illegally from ever entering a courtroom. This would also be punishing the police and investigators, because the evidence could be incriminating and therefore possibly causing the investigators from losing the case that they have most likely worked so hard on. This would cause all the investigators to stop using the illegal techniques, therefore eliminating the problem of ever having to use the exclusionary rule. One must recognize that the Constitution and the Bill of Rights are not to simply authorize and empower government but to limit it as well. 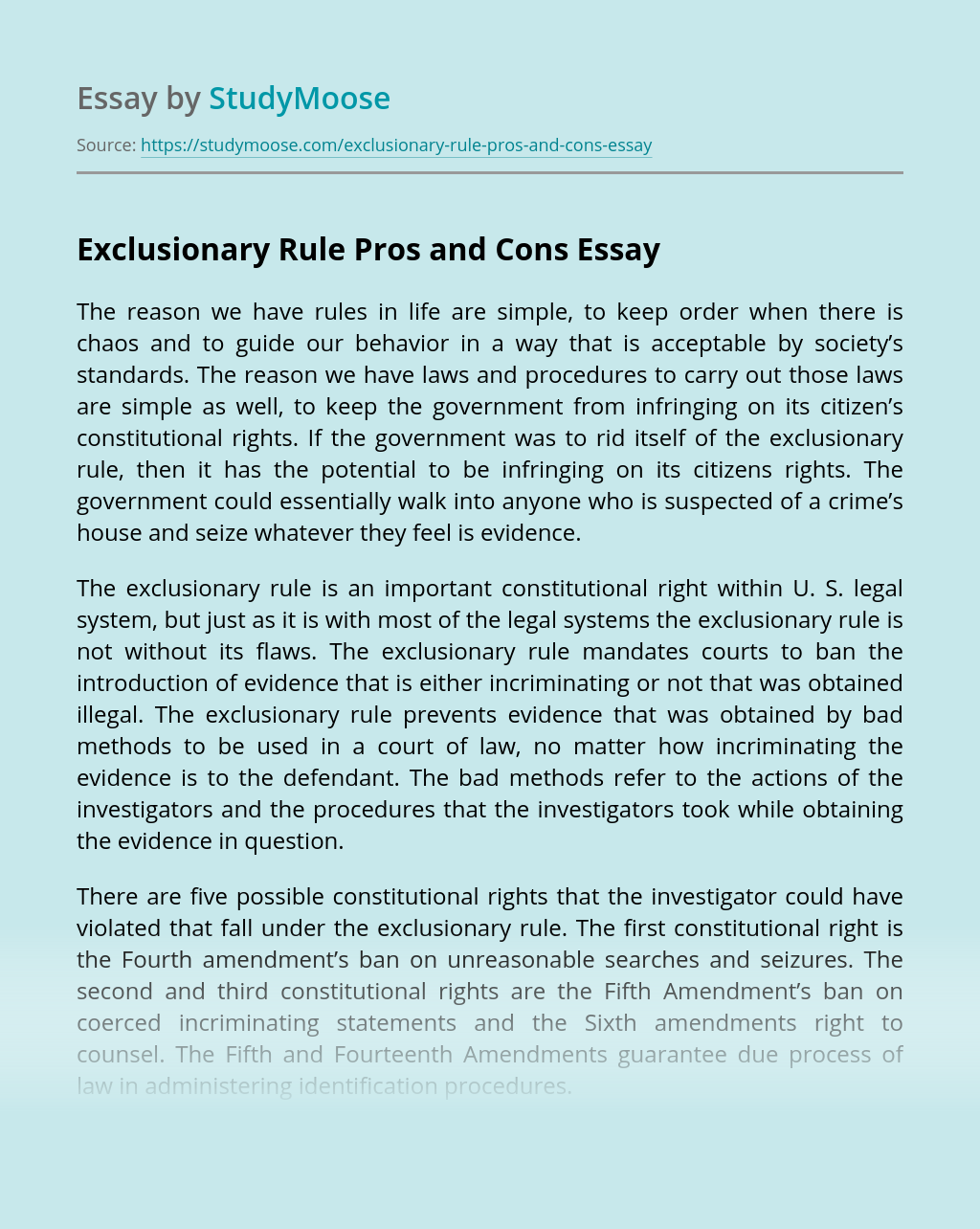 Turn in your highest-quality paper
Get a qualified writer to help you with
“ Exclusionary Rule Pros and Cons ”
Get high-quality paper
Helping students since 2015
Stay Safe, Stay Original