Abstract “It is very tempting for people not to think, to remain submerged in reality rather than aware of it, to be carried along by the current of events rather than creating their destiny through thoughtful, independent choices” (Chaffee, 2013). In this paper, the importance of philosophy is discussed in practical terms. Why is it important? What purpose does it serve and what reasons do people have for pursuing an education in it? How can this affect my life?

The major branches of philosophy, which are Metaphysics, Epistemology, Ethics, Political & Social, Aesthetics and Logic, are also discussed along with the contributing questions specific to each branch and what each branch focuses on.

Turn in your highest-quality paper
Get a qualified writer to help you with
“ Introduction to Philosophy ”
Get high-quality paper
NEW! AI matching with writer

Taken together, they mean ‘the love or pursuit of wisdom’” (Chaffee, 2013). There are so many reasons one would want to study philosophy, and considering that we are all different, our reasons vary. “Philosophy means liberation from the two dimensions of routine, soaring above the well known, seeing it in new perspectives, arousing wonder and the wish to fly” (Walter Kaufmann, n. d. ). Studying philosophy is a life-changing experience. It is impossible to “unlearn” something once you have discovered it, so upon your mind being awakened, it cannot go back to sleep.

This grants you the gift of having a new, more complete perspective of the world around you and of life in general.

People are naturally inquisitive creatures. This is one of our biggest assets, as well as our biggest downfalls. Philosophy teaches you to think critically about important issues. This is something that takes time, effort and practice. Thinking critically isn’t necessarily easy, but the benefits are plentiful. The purpose of philosophy is to ask questions that “penetrate the surface of life to confront the deeper currents lying beneath” (Chaffee, 2013, p. 4).

Due to there being so many different categories of philosophical questions to be answered and studied, there are several branches of philosophy with questions specific to them and certain methodologies used in search of answers. These branches are Metaphysics, Epistemology, Ethics, Political & Social, Aesthetics and Logic. Metaphysics Metaphysics is “the study of the ultimate characteristics of reality or existence” (Chaffee, 2013, p. 31).

Bertrand Russell defines metaphysical philosophy as such, “Metaphysics, or the Philosophical Areas 4 attempt to conceive the world as a whole by means of thought, has been developed from the first by the union and conflict of two very different impulses, the one urging men towards mysticism, the other urging them toward science. ” Some of the major questions asked in this area of inquiry are, “What is the nature of reality? ”, “What is the nature of self? ”, “How are the mind and body related to each other? ”, “Do we have personal freedom or are our choices limited? ”, “What are the arguments for and against the existence of God? ”, “Is there life after death? ” and “Does life have meaning? ”

The methodology used in Metaphysics has expanded so much over the years since Aristotle. One method used for answering questions such as these “emphasizes the continuity of metaphysics with science.

On this conception, metaphysics is primarily or exclusively concerned with developing generalizations from our best-confirmed scientific theories” (“Stanford Encyclopedia of Philosophy”, 2014). Because of the difficulty answering some of these questions, some believe Metaphysics to be “impossible. ” There is no current way to label a metaphysical statement either true or false, and therefore “impossible to find out what they are” (“Stanford Encyclopedia of Philosophy”, 2014). Citations Chaffee, J. (2013). The Philosopher’s Way: Thinking Critically About Profound Ideas (4th ed. ).

Upper Saddle River, NJ: Pearson Education, Inc. Stanford Encyclopedia of Philosophy. (2014). Retrieved from http://plato. stanford. edu/entries/metaphysics/ Epistemology Epistemology is the study of knowledge. This identifies and develops criteria, as well as methodologies, for what we know and why we know it (Chaffee, 2013, p. 31). Some questions asked regarded epistemology are, “What is truth? ”, “Can we ever really know anything? ”, “What Philosophical Areas 5 are the sources of knowledge? ”, “What is the relation between truth and knowledge? ” and “How can you increase your wisdom?

” This, “Defined narrowly…is the study of knowledge and justified belief,” according to the “Stanford Encyclopedia of Philosophy (2014) or SEP. Now, this being said, there are sources of knowledge and justification in epistemology. These sources include perception, introspection, memory, reason and testimony. The limits to this branch of philosophy are skepticism, closure, relevant alternatives, denial, and moorean, contextualist & ambiguity responses (“Stanford Encyclopedia of Philosophy”, 2014). Citations Chaffee, J. (2013).

The Philosopher’s Way: Thinking Critically About Profound Ideas (4thed. ). Upper Saddle River, NJ: Pearson Education, Inc. Stanford Encyclopedia of Philosophy. (2014). Retrieved from http://plato. stanford. edu/entries/metaphysics/ Ethics Ethics is the study of moral values and principles. Questions regarding ethics are things such as, “How should we treat other people? ”, “Is there a ‘good life’ for humans? ”, “What is the relation between moral values and religion? ” and “How do we decide on the moral rightness of social issues? ” (Chaffee, 2013, p. 31).

Everyday ethical concerns in life can include any topic from capital punishment, euthanasia, lying, human rights, abortion, animal testing, cloning, slavery and pornography, among several others. The purpose of having and studying ethics is a way for people to ensure that the decisions made are following a preset ethical code or guideline. “Creating yourself to be a wise and knowledgeable person entails developing an enlightened moral compass that will guide your decisions. People typically rely on what they ‘feel’ is right Philosophical Areas 6 when faced with challenging moral dilemmas.

According to philosopher, Baron D’Holbach, “Politics must conform to the essence and aims of society, not to the passions of rulers. ” This means analyzing the values that the society should be based on, keeping in mind individual rights and justice. Citations Chaffee, J. (2013). The Philosopher’s Way: Thinking Critically About Profound Ideas (4th ed. ). Upper Saddle River, NJ: Pearson Education, Inc. Aesthetics Aesthetics studies beauty, taste and art. Two very distinct questions that are specific to this branch are as follows: “What is the nature of beauty? ” and “What is art?

” “It analyzes efforts to establish standards for beauty in all of its various manifestations. And it explores the nature and purpose of art in human affairs” (Chaffee, 2013, p. 37). Have you ever heard of the saying, “Beauty is in the eye of the beholder”? Well, this is the branch of philosophy that examines how to identify principles of beauty. Other questions related to this asked in aesthetics are “Are there Philosophical Areas 7 universal standards of beauty, or are they relative to cultural and individual taste? ” and “Is there one core concept of beauty or many different concepts? ”

Citations Chaffee, J. (2013). The Philosopher’s Way: Thinking Critically About Profound Ideas (4th ed. ). Upper Saddle River, NJ: Pearson Education, Inc. Logic Logic is the branch of philosophy that “seeks to establish the rules of correct reasoning, clear understanding and valid arguments” (Chaffee, 2013, p. 31). “What are the logical principles of correct reasoning? ” and “How do people use incorrect reasoning to reach false conclusions? ” are questions associated with this branch. In this branch of philosophy, critical thinking is one of the most important skills needed. Citations Chaffee, J.(2013).

The Philosopher’s Way: Thinking Critically About Profound Ideas (4th ed. ). Upper Saddle River, NJ: Pearson Education, Inc. Thought Development: Philosophy & Culture Religion, philosophy and culture are said to be the three pillars or elements of human reality. How does this tie into thought development? What is the relationship between philosophy and culture? “…compared to the feet with which Man journeys towards his destiny, philosophy could represent the eyes that scrutinize that journey, and culture, the earth on which Man is walking during his concrete pilgrimage…” (Panikkar, 2000).

Depending on one’s approach to examining this matter, it may be difficult to separate religion from philosophy. For example, with an intercultural approach, it would not be possible, for religion and philosophy would both be dependent upon the culture. The reason that the two are inseparable sometimes is, according to Philosophical Areas 8 Panikkar (2000), “Philosophy is but the conscious and critical accompaniment of Man’s journeying towards his destiny. This journeying is called religion in many cultures. ” Citations Panikkar, R. (2000). Religion, Philosophy & Culture.

Retrieved from http://them.polylog. org/1/fpr-en. htm Personal Attachment to Inquiry Philosophical Areas 9 Epistemology is the branch of philosophy that sticks out to me the most and resonates closest to my innermost self. The runner up is metaphysics, because I do find myself questioning and wondering on the meaning of life and things of that nature. However, I have decided a long time ago that the meaning of life is specific to the person. Whatever it is that drives you, motivates you and keeps you pushing forward, that is your meaning; your “why”. Epistemology fascinates me because of its questions regarding knowledge and truth.

Just because we know something, does that make it truth? In the Taoist religion, the journey you embark on is to enlightenment. The purpose of Taoism is to find truth and to see the whole picture, the entire picture, for what it is. Not many make it to such a spiritual level such as that, but that is the reason for working so diligently internally. I have always admired Buddhist and Taoist for these reasons. As far as cultural influence on my decisions goes, I would have to admit that the American culture does not have as much to offer (that I am seeking, at least) as other cultures do.

I am proud of my heritage, but my culture is a different story. I feel like I’m searching for something, yet cannot pinpoint what that something is. Hopefully by the end of this course I will have a better outlook and idea of what that thing is. References Chaffee, J. (2013). The Philosopher’s Way: Thinking Critically About Profound Ideas (4th ed. ). Upper Saddle River, NJ: Pearson Education, Inc. Stanford Encyclopedia of Philosophy. (2014). Retrieved from http://plato. stanford. edu/entries/metaphysics/ Panikkar, R. (2000). Religion, Philosophy & Culture. Retrieved from http://them. polylog. org/1/fpr-en. htm. 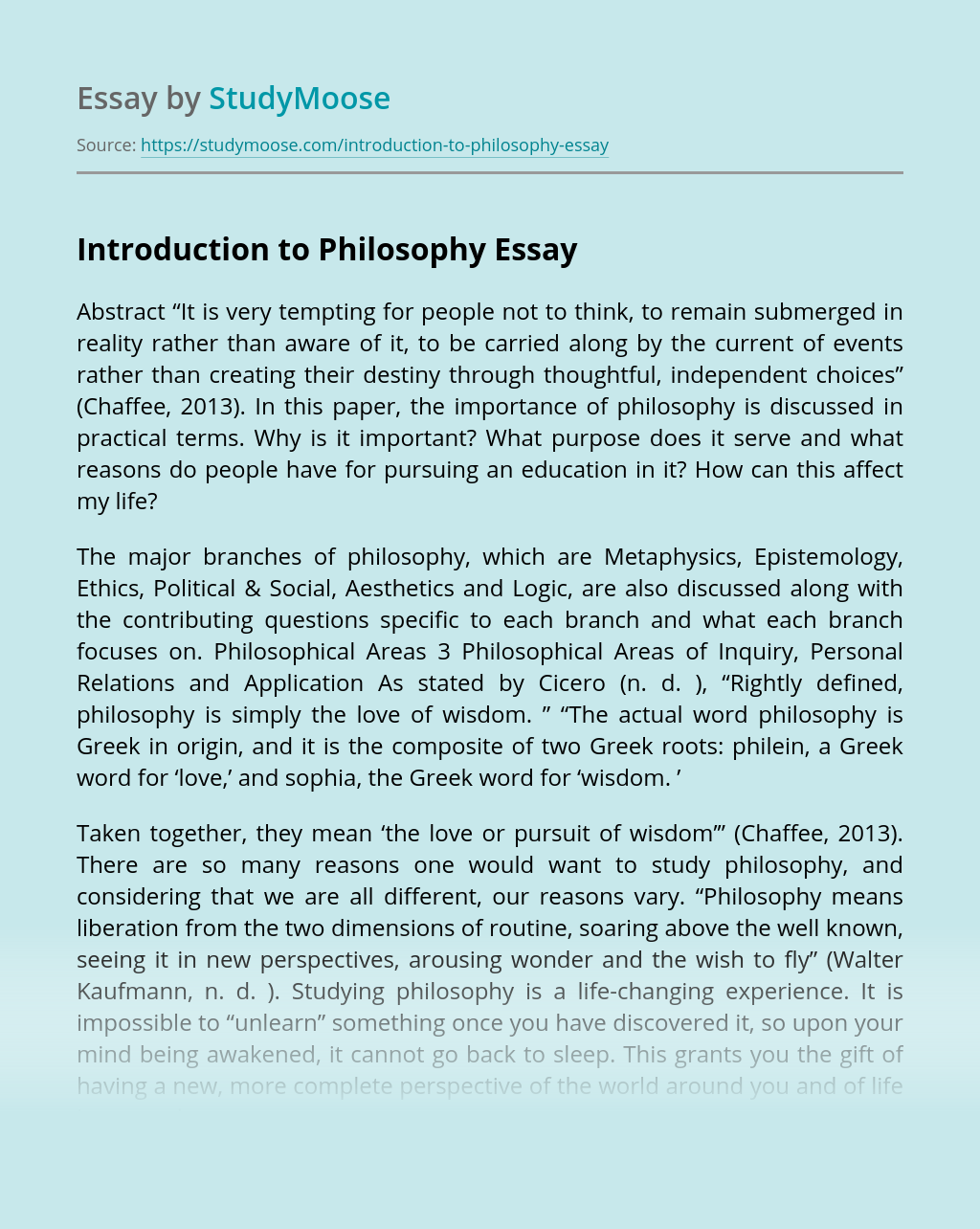 Turn in your highest-quality paper
Get a qualified writer to help you with
“ Introduction to Philosophy ”
Get high-quality paper
Helping students since 2015
Stay Safe, Stay Original