THE PROBLEM AND REVIEW OF RELATED LITERATURE

Tea, however has been a beverage in China as early as 10th century BC. Many nations throughout history have savored it and some of them are China, Japan, Korea, Vietnam, Greece, India, Iran and Turkey.

Don't use plagiarized sources. Get your custom essay on
“ Introduction of Tea ”
Get custom paper
NEW! smart matching with writer

Some even say that the consumption of various forms of tea results in acute liver damage. Considering all of these, tea, therefore can be divisive.

There is, however, another way that people uniformly view tea: it can ba a viable product or business. In fact, almost all restaurants in the country offer Ices Tea. Nestle makes money out of Nestea. Tea indeed is a profitable business venture.

Nowadays, there is a new tea craze sweeping the metropolis.

People line up to savor this new incarnation of tea. Some even spend more than 30 minutes just to drink this new fad. It is milk tea. ———

What’s your comfort indulgence? A warm cup of coffee at the start of the day?Or maybe a mug of hot chocolate after a stressful week? For those of you who have a taste for unique, rich flavors and are craving something new yet familiar, there’s a cozy little cafe that offers just the thing you need.

Nowadays, beverages are one of the most popular hangouts among adults and young adults or those whom we call “yuppies” or young urban professionals.

This is the place where they can have the opportunity to relax, unwind after an exhausting week of work.

Competition among beverages should not be the only focus of attention of beverage managers. They also have to consider the effects of the continuing economical crisis that we are experiencing today and how they will be able to handle difficult situations up with it so that their business will continue it’s operation and not be affected.

The uses of promotional strategies are very famous among beverage establishments. This helps them attract more potential customers. It is also a business strategy that they can use to be able to context the tight competition, face the continuous worsening of our economy and at the same time be able to give their customer’s satisfaction in the products and services they are availing.

A. Milk Tea in The Philippines

In the past year, tea shops are increasing all over the metro, effectively cementing its place as the biggest food/beverage trend of 2011. According to Bianca Consunji and RonnaCapili, Milk Tea is more affordable than cold designer coffee.

B. Milk Tea As a Business

Originally from Hong Kong, Happy Lemon was brought to the country by a group of Chinese-Filipino businessmen who have been friends since grade school and college: Kelvin Gaisano, Kristine Gaisano, Smart Gilas player/TV host Chris Tiu, Andy See, Wesley Pardilla, and Edward Go. The young entrepreneurs share a common love for milk tea. Since there are only a few restaurants which serve good quality milk tea in the Philippines, they went abroad in search for the best cup of milk tea.

Then, Kelvin got an idea. “Why don’t we put up a milk tea business?” he suggested. All agreed. But finding the perfect brand to bring to the Philippines was the challenge. Chris Tiu related: “Filipinos, to some extent, have already been introduced to milk tea, but we want them to develop a deeper appreciation for it by offering quality beverages that boast of unique and delicious flavors, made from the freshest ingredients from around the world.”

Kelvin Gaisano added: “We know there are risks involved. But we also believe that there is an under-served market for milk tea.” In their quest to find the best milk tea, the seven young businessmen went everywhere and tried different milk tea brands. One day, they chanced upon Happy Lemon, a Hong Kong-based milk tea business that has been in the market since 2006. As they waltzed inside the store and started looking at the menu, they knew they had found “The One.” They agreed to bring the brand home to the Philippines. However, it wasn’t an easy task. Tiu shared that they had to wait long before the franchise was finally granted to them. “It was a long process of courtship,” he said. “For one, we didn’t know who to contact for the franchising. Two, only one of us, Andy See, knows how to speak straight Mandarin.”

They sent letter after letter. They followed up each letter with calls, but they received no reply at all until September 2009 when someone from the Happy Lemon headquarters in Hong Kong informed them that they were open to the idea of establishing Happy Lemon in the Philippines. In November 2010, Happy Lemon opened its door to Filipino milk tea lovers, including those who are curious about the brand. A quick look at the beverage menu is enough to pique one’s curiosity.

Using the good quality tea leaves imported from China which are freshly brewed every day, Happy Lemon has several milk tea variants such as the Lemon Series, recommended for those who feel thirsty; the Rock Salt Cheese, their best-seller; the plain Milk Tea series; Mousse Spin, which is more popular among the younger ones; Cocoa & Coffee, which is more chocolate and coffee based with several toppings; and the exotic Specialty Drinks and Fresh Tea drinks, which are less sugary and specially made for health conscious individuals. For former King Eagle and current television host Chris Tiu, it was a love for bubble tea that led to joining the Gaisano family and their partners in bringing Hong Kong’s Happy Lemon brand to local shores. “In Vancouver, Canada, the tea places are really packed. Here, it’s always been about coffee, so we think that there’s room for Filipinos to learn to appreciate tea,” he shares. ——-

Happy Lemon is a Hong Kong-based drink shop brought to the Philippines by a group of friends from Ateneo, who have discovered it during their travels and grown to love it. Happy Lemon has over 100 branches worldwide, with the first local branch having opened at the Promenade in Green hills only last November. Due to its immense popularity, new branches are already being planned for Eastwood and Power plant Mall.

But, what makes Happy Lemon different from all the other beverage hubs cropping up lately? Athlete and TV host Chris Tiu, head of Happy Lemon’s Marketing and Business Development, says, “First of all, everything is fresh. The products, they’re all made from freshly brewed tea, so the flavor is more distinct. Plus, the products are very unique. The company spends a lot in and research and development, so they’re really [high] quality. It’s not like other brands that are mostly powdered lang.”

He explained that while most fast drink providers are for to-go orders only, the group wanted Happy Lemon to be more of a homey place with a warm, welcoming ambiance. “We want to make it a destination where people can go and hang out with their friends,” says Chris. “Instead of going out on gimmicks at night or drinking alcohol, go here na lang. Wholesome tayo, ‘di ba? Healthy pa!” CJ de los Santos, Cosmo.ph Staff Writer

——
Occasion Based Marketing is an approach to connect when and why consumers use the product with how they shop for the product. Companies need to realize that their customers are not only different from each other, but are also different from themselves at different times. People have different needs when they are at work and when they are at home or socializing. The results of this study would mean that the consumer durable companies and retailers are adapting various promotional strategies to attract deal prone, promotion liking customers. Consumers are bombarded with messages pitched through a growing number of channels: broadcast and narrow cast television, radio, on-line computer networks, the internet, telephone services such as fax and telemarketing, and niche magazines and other print media. In developing the product strategy, marketers strive for the right mix of promotional elements to make sure that their product is well received.

One of the primary goals of a customer promotion is to entice the customer to take the final step and make a purchase; Advertising creates the interest and excitement that brings the consumer into the store. Marketers then use other tactics in conjunction with advertising programs. In addition to leading to the final decision to buy an item, consumer promotions programs can be highly effective in bringing traffic into a store and generating brand loyalty. (Stanley George June 30, 2012) Many marketers believe that behavioral variables – occasions, benefits, user status, usage rate, loyalty status, buyer readiness stage, and attitude- are the best starting points for constructing market segments (Philip Kotler, Keller, Koshy and Jha, 2007). Buyers can be distinguished according to the occasions they develop a need, purchase a product or use a product (Philip Kotler, 2002).

5. What are the comments and suggestions to improve their promotional strategies?

This study will deal with the Effectiveness of the Promotional Strategies of Selected Happy Lemon Branches As Perceived by the Customers The variables are non-alcoholic beverages which are soft drinks, juices, tea, coffee, milk, energy drinks, chocolate drinks. This study will only include random college students of all the courses in St. Paul University Quezon City and random customers of Happy Lemon. 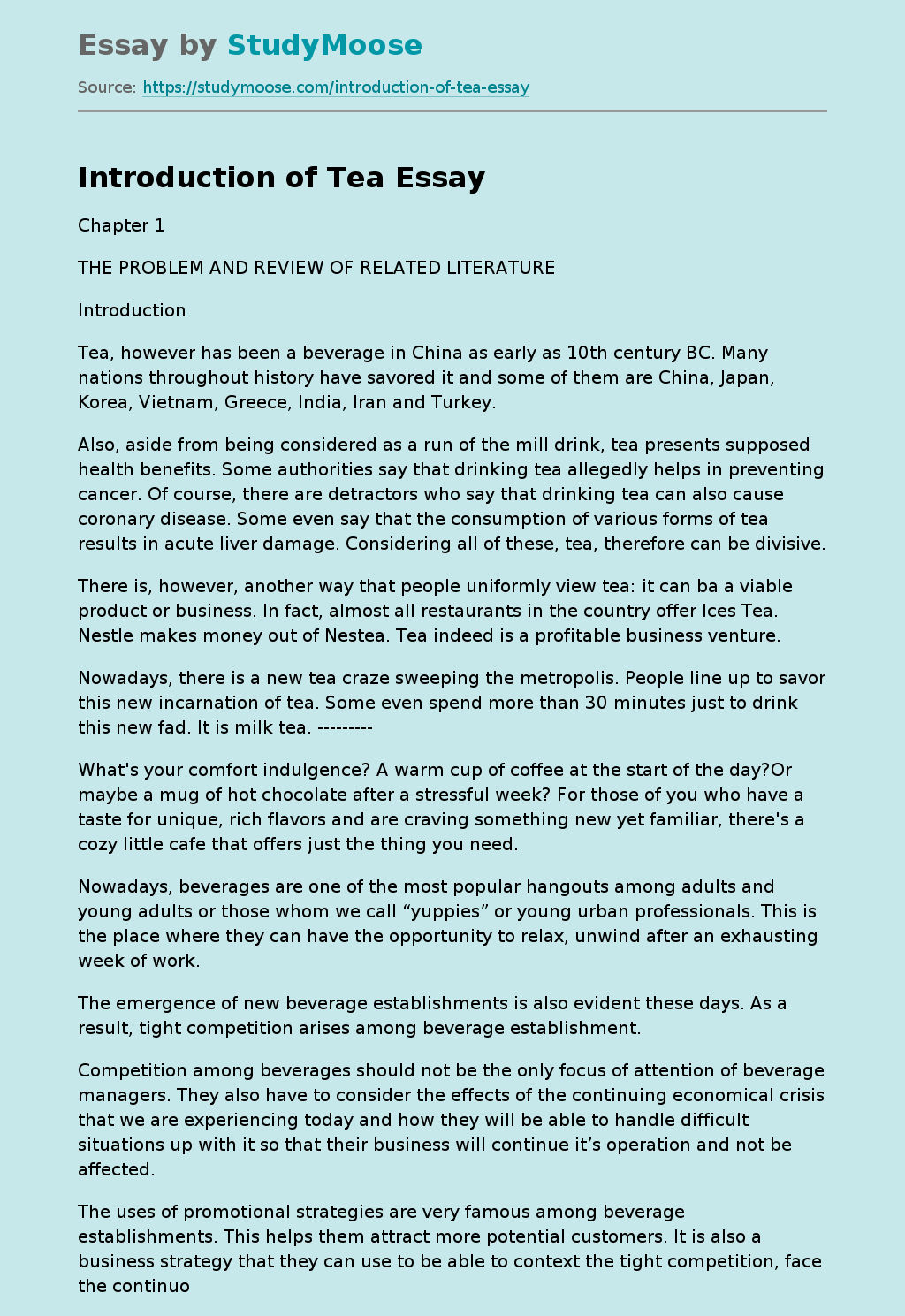