Interpretation of Carol Gilligan’s “In a Different Voice”

“In a Different Voice” by Carol Gilligan has been called a revolutionary book, a turning point in the development of feminism, or at least feministic psychology. It is hard to say whether Gilligan herself pursued such a purpose, although she declares rather ambitious objectives, which are to “to bring women’s voices into psychological theory and to reframe the conversation between women and men” .

The question statement demonstrates that, under Gilligan, women voices were not previously heard by psychologists. As she notes, in most concepts “men’s experience stands for all of human experience–theories which eclipse the lives of women and shut out women’s voices” .

Don't use plagiarized sources. Get your custom essay on
“ Interpretation of Carol Gilligan’s “In a Different Voice” ”
Get custom paper
NEW! smart matching with writer

The construction of classical psychology stands on the foundations laid down by Sigmund Freud, it is further developed by such prominent thinkers as Carl Jung, Abraham Maslow, Eric Berne and Erik Erikson, while females are mostly perceived as their students (like Sabina Spielrein) or adepts developing their teachings, yet unable to propose an original teaching themselves (like Marie-Louise von Franz).

This caused psychology to become a “male business” and made women dependent on the ideas of men, and oppressed by those ideas. Protests against such situation took mostly literary form, with “Yellow Wallpapers” being most famous.

The development of specific female psychology has been hindered by the fact that the major psychological theories have been developed in the era of male domination in the society, so it is pretty hard to establish a new kind of psychology without altering the entire construction.

Regarding this situation Gilligan observes that “only when life-cycle theorists divide their attention and begin to live with women as they have lived with men will their vision encompass the experience of both sexes and their theories become correspondingly more fertile” . This is the first factor causing necessity of “female psychology”.

Women are now obviously playing an ever more active role in the society, including such previously “exclusively male” fields like business, politics and even the military. They occupy such positions as Secretary of State and even challenge to become presidents – a situation which Freud could hardly imagine. Consequently, women have to face new psychological challenges and pressures, which Freud or Jung could not imagine as well. Being a housewife or a “palacewife” is something quite different from making business or to be engaged in actual politics.

This is a second factor causing a necessity in new approach to female psychology and moral socialization – a matter which Gilligan pays special attention to. Contrasting the two previous objective factors, there exists also a subjective factor. Gilligan describes the problem as follows: “As we have listened for centuries to the voices of men and the theories of development that their experience informs, so we have come more recently to notice not only the silence of women but the difficulty in hearing what they say when they speak” .

This problem is, perhaps, even more complicated than the two previous ones, since it is related to perception of psychological theories. A woman attempting to create an own concept will have to apply a cognitive and descriptive apparatus developed in “male” theories, necessarily making her psychology a “male psychology” and making “male” elements hard to be analyzed and removed if necessary. Such a female psychologist would hardly even realize how “male” her psychology is.

Such “female” theory being constructed with “male” means would have a basic defect – it would apply male standards to female psyche, and therefore would hardly be different from “male” theories. Gilligan does recognize this problem saying that “failure to see the different reality of women’s lives and to hear the differences in their voices stems in part from the assumption that there is a single mode of social experience and interpretation” . In this sentence she stresses the reader’s attention both on the objective part (experience) and subjective one (interpretation). So, is there a need in two different psychologies?

Interpretation of Carol Gilligan’s “In a Different Voice”. (2016, Sep 25). Retrieved from https://studymoose.com/interpretation-of-carol-gilligans-in-a-different-voice-essay 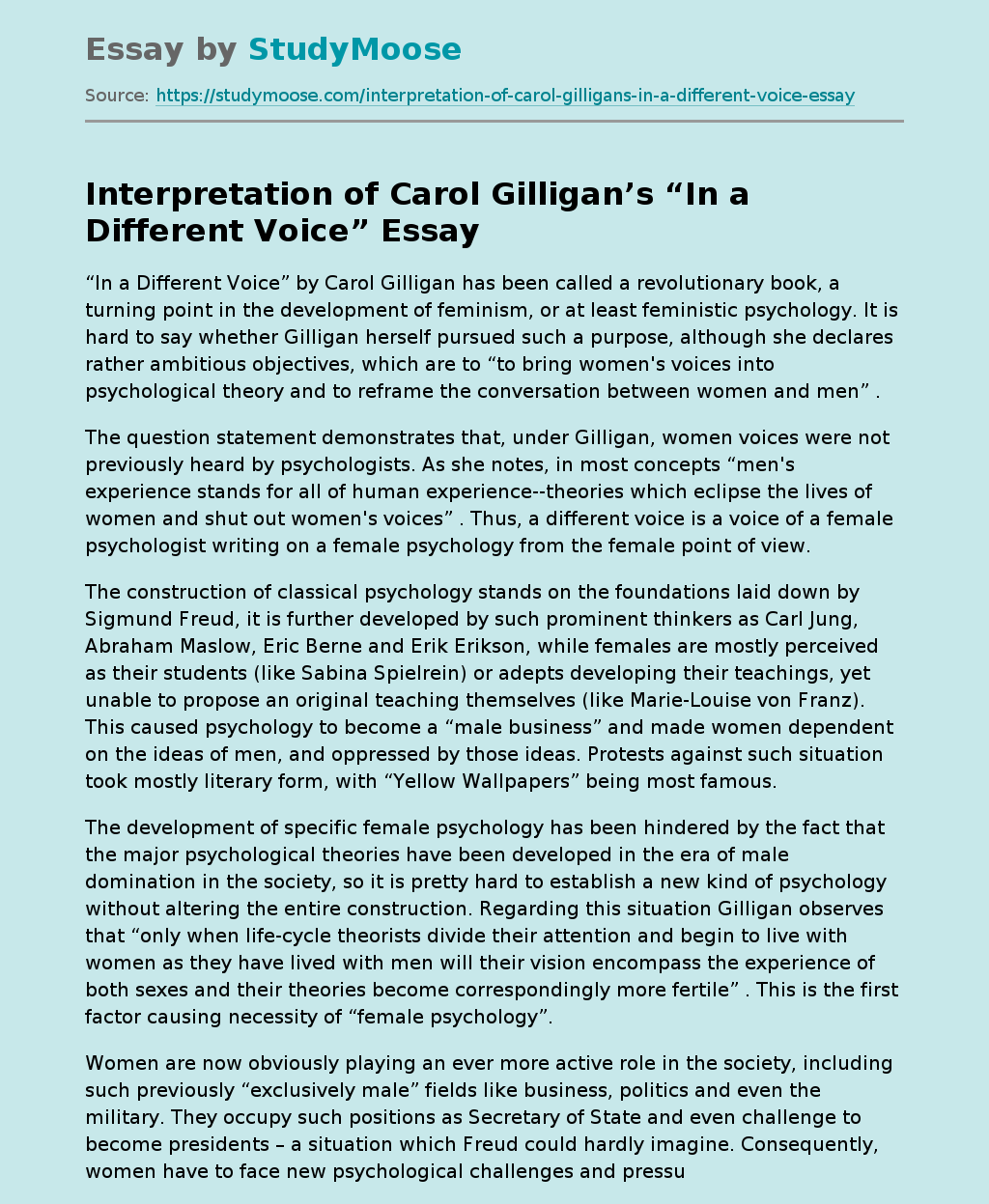