Language is a very important aspect of the lives of the people. Because of language and the interaction of people, communication transpires and it enables everyone to connect with everyone else. It is with the use of language that simple whims and requests to more difficult conversations and negotiations which concern the nation’s affairs or economic and business transactions can be granted. Moreover, language reflects the history and culture of a certain nation—it can mirror the characteristics and attitudes of a person.

Don't use plagiarized sources. Get your custom essay on
“ Innate Ability on Universal Grammar ”
Get custom paper
NEW! smart matching with writer

However, no matter how helpful land useful language is, there are instances when language causes disputes and misunderstandings as there are over a hundred of languages of different nations which lead to confusion on meaning. In addition, even if the same people share the same language, miscommunication can still arise due to the fact that there are confusing meanings and different interpretations that vary from person to person. However, there is something very integral in language in which, no matter what country a person belongs to, he or she is still able to practice.

No matter what language it is, there should always be a form or order of words which enables the receiver of the message at the other end to comprehend the message. This is the semantic aspect of language which encompasses and is integral to all languages. Even if there is a tremendous difference in the languages of each country, semantics ties them all together and is greatly connected to the one which this paper is actually going to explore—grammar.

The Concept of the Universal Grammar

Grammar is defined by many different people and according to different contexts. Students and younger kids may have the opinion that it is something so complex, tedious, and monotonous. On the other hand, academic people, scholars, and linguists may have an opinion that it is something so enthralling and exciting. Though different in their perceptions, one thing remains the same: It is imperative for a person to fully use it with accuracy and appropriateness as to ensure that effective communication is made.

While grammar and linguistics is indeed complex, this paper will only focus on one aspect of these subjects which connects not only grammar and linguistics but also includes the fields of psychology, neurology, and history: the concept of Universal Grammar. There have been many speculations about the theory of universal grammar (UG) and its existence in the first place. There have been a couple of people of people who rebuked Chomsky’s theory of universal grammar and that “UG is a theory which provides constraints on linguistic representation” (White 1).

According to the Merriam-Webster Online, however, Universal Grammar is defined as: “the study of general principles believed to underlie the grammatical phenomena of all languages ; also such principles viewed as part of an innate human capacity for learning a language. ” The first definition is actually more appropriate with regard to the introduction of this essay, but the latter is more apt with regard to the genuine focus of the paper—the capability or ability of humans on language-learning and the amazing naturalness of it that it actually seems innate in everyone.

It is with the person of Noam Chomsky to whom the theory of universal grammar can be traced. Chomsky is the famous linguist who theorized the concept of universal grammar which actually leads to a whole other dimension on languages and linguistics: UG is a theory of knowledge, not behavior; its concern is with the internal structure of the human mind. UG theory holds that the speaker knows a set of principles that apply to all languages… Each principle of language that is proposed is a substantive claim about the mind of the speaker and the nature of acquisition….

the importance of UG is its attempt to integrate grammar, mind, and acquisition at every moment. (Cook qtd. in Herman 17-18) If, according to Chomsky, universal grammar already exists, then why do people need to further study it anymore and why is it that many people are finding difficulty with stringing sentences together to enable them to produce grammatically flawless and perfect language? Perhaps, one should look at the point of the whole theory and the evidences that underlie it.

It is imperative to note that according to the theory, universal grammar simply means that it holds the belief that there is an “internal structure” within the confines of “the human mind,” and because of this structure which is so innate in a person, he or she is able to recognize and produce sentences or a language which has an obvious structure. Language Acquisition and the Feral Children However, a counter argument can be made stating that people only learn such grammar because of the language produced around them.

In simple terms, the logical way in explaining this universal grammar that a person or (in the most often cases) a child innately has supposedly is through the learning acquisition he or she has made through his or her surroundings. However, Timothy Mason has different ideas. Citing Chomsky and other situations in the history of psycholinguistics, he concluded that there are people, most specifically children, who are able to form language with little or absolutely no interaction at all with other people.

There are famous accounts of wild children who are called the feral children—they are what Mason calls as “tragic figures, offering glimpses of what might have been, of fully human intelligence that somehow does not enable them to live a social life. ” There are numerous personalities who became famous for being one of the feral children; one of them is Genie. In a gist, Genie is a thirteen-year old young girl who has been locked up by his father from the outside world with absolutely no interaction with people who may have caused her to acquire a language whatsoever.

The surprising thing is Genie does exhibit language acquisition even if it is in a very minimal way. Other personalities who have undergone the same history can be plenty, ranging from the “Victor, the wild boy of Aveyron” to Genie’s case in 1970 (Mason). How did these children then learn their very own primitive language if they are unable to interact in a normal environment? Thus, the theory of universal grammar may indeed hold some truth in it. The Neurological Connection of the Brain and Language Another basis of the universal grammar is the neurological explanation behind the theory.

According to Mason, there are certain evidences that the “language functions” of a person seem to be located in a “localized [area] in the brain. ” These areas are proven to be affecting the language functions of the brain. The studies of brain illnesses and diseases have proven this as what appears in Norman Geshwind’s essay: …the most fruitful has been the study if language disorders, followed by postmortem analysis of the brain, in patients who have suffered brain damage. From these studies has emerged a model of how the language areas of the brain are interconnected and what each area does.

Thus, ever since a person is born, his or her brain is already working to acquire and learn the language that a person needs to produce. Conclusion In conclusion, although there are still speculations about the authenticity of the universal grammar and even if it is still a theory, there should be no reason to rule out the possibility that it may indeed be true. Perhaps, in the near future, someone may be able to fully find out the truth and prove that there is indeed a universal grammar existing within the confines of each person. 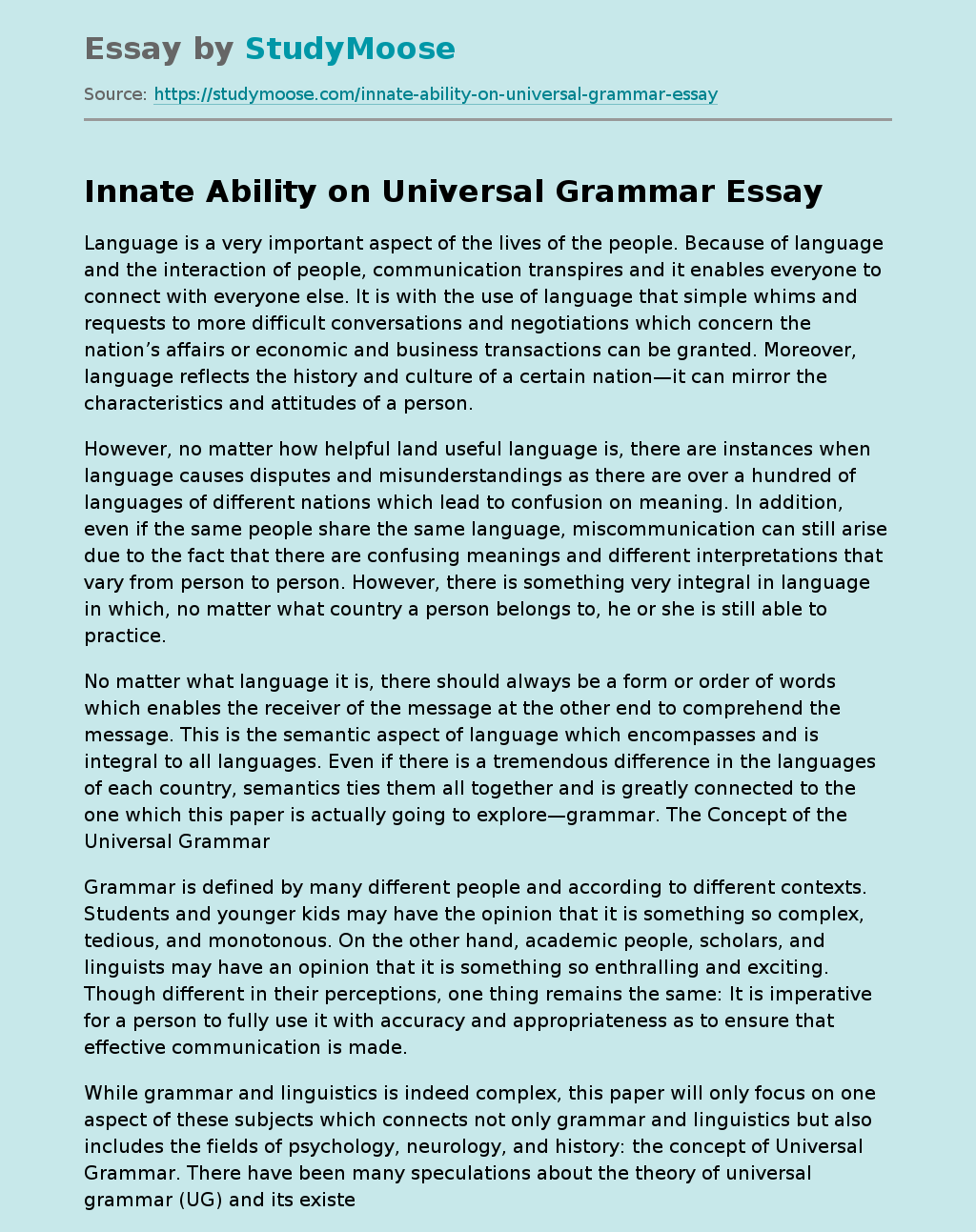