Creativity is a level of creative endowments, ability for creation, which compose relatively stable characteristic of person. During last years this term became very popular, and people almost forgot the word “creative ability”. These terms seem to be identical, but it is better understand creativity not only as creative ability or a number of such abilities, but also as ability for creation; and these concepts are not identical, although they are very close one to the other.

Creative components of intellectual processes were of great interest to many scientists during the whole time of development of psychological science.

Don't use plagiarized sources. Get your custom essay on
“ Remote Associates Test and Creative Ability ”
Get custom paper
NEW! smart matching with writer

We can just remember names of Alfred Bitnet, Frederic Bartlett, and works of Max Wertgamer, Wolfgang Keller, Charles Dunker and many other interesting researches. Still, these works actually didn’t take into consideration individual differences in creative abilities, although they confessed that different people have different creative abilities.

Interest to individual differences in creative abilities appeared in connection with evident achievements in the field of testometrical researches of intellect and with no less than evident omissions in this field.

Till the beginning of 60-ies scientists already had large scale of intellect testing, and this fact presented new problems and questions.

Particularly, they found out that professional and life success is not connected directly with intellect level, calculated with the help of IQ testing. The experience have shown that people with not so high IQ coefficient are able for great achievements, and many others, which IQ is much higher, are very often left behind (Hamilton, M.

A). Scientists supposed that the decisive role play here some other features of mind, which were not seized by traditional testing.

Inasmuch as comparison of successful decision of problem situations with traditional testing of intellect in majority of cases have shown absence of connections between them, some psychologists came to conclusion that effectiveness of solving problems depends not of knowledge and experience, which can be measured by intellect tests, but of special ability “to use information given in tasks by different ways and in high tempo”. Such ability was called ‘creativity’.

The main way of creativity diagnostics became Remote Associates Test (RAT), with help of which they measure peculiarities and “quickness of transference of attention at some symbolic level in limits of big volume of information” (Mednick, S.A., The associative basis of the creative process).

RAT test has a little bit other conception in its basis. Mednick considers that creativity process consists of convergent and divergent parts, to tell more distinctly, division of cognitive act for these parts shows it discrepancy. Mednick thinks that when you take problems from more remote areas, the more creative is process of solving this problem. In this way, divergence is replaced by actualization of remote zones of sense space (Mednick, S. A. (1968). The Remote Associates Test. Journal of Creative Behavior).

But, at the same time, synthesis of elements can be non-creative and stereotype, for example, combination of features of horse and man actualizes image of centaur, but not the image of a person with horse head. Creative solving of problems differs from stereotype: the essence of creativity, in accordance with Mednick, is not in peculiarities of operations, but in ability to overcome stereotypes at the final stage of thought process, and as we’ve told before, in wideness of association field.

The main procedure of RAT test is that person is proposed three words, taken from maximum remote areas, and he has to give the fourth word, which will “connect” them in one whole in some way. The peculiarity of test is that words-stimulus’ are chosen in such a way that each of them corresponds to stereotype association (Taft, R., & Rossiter, J. R). Originality of answer is estimated by fact, how it is far from stereotype.

So, theoretical considerations and experimental data allow making conclusion that that creativity and intellect are orthogonal factors; it means they are independent one from the other. Besides, they are operationally opposite: situations which are favorable for intellect demonstration are opposite by their characteristics to situations which demonstrate creativity.

Although RAT test is not reliable for 100%, but still it is the most reliable creativity test for present time. RAT is good test for creativity, according to numerous experiments and numbers of testing which allowed comparing these situations which leads to differences between intellect and creativity usage. The differences which we can see in experiments, connected with differences in correlations between intellect and creativity, depend of type of methodic, used for diagnostics of these features. Still, the scientists need to develop mechanisms of creativity determination for perfection of their prognostic value. 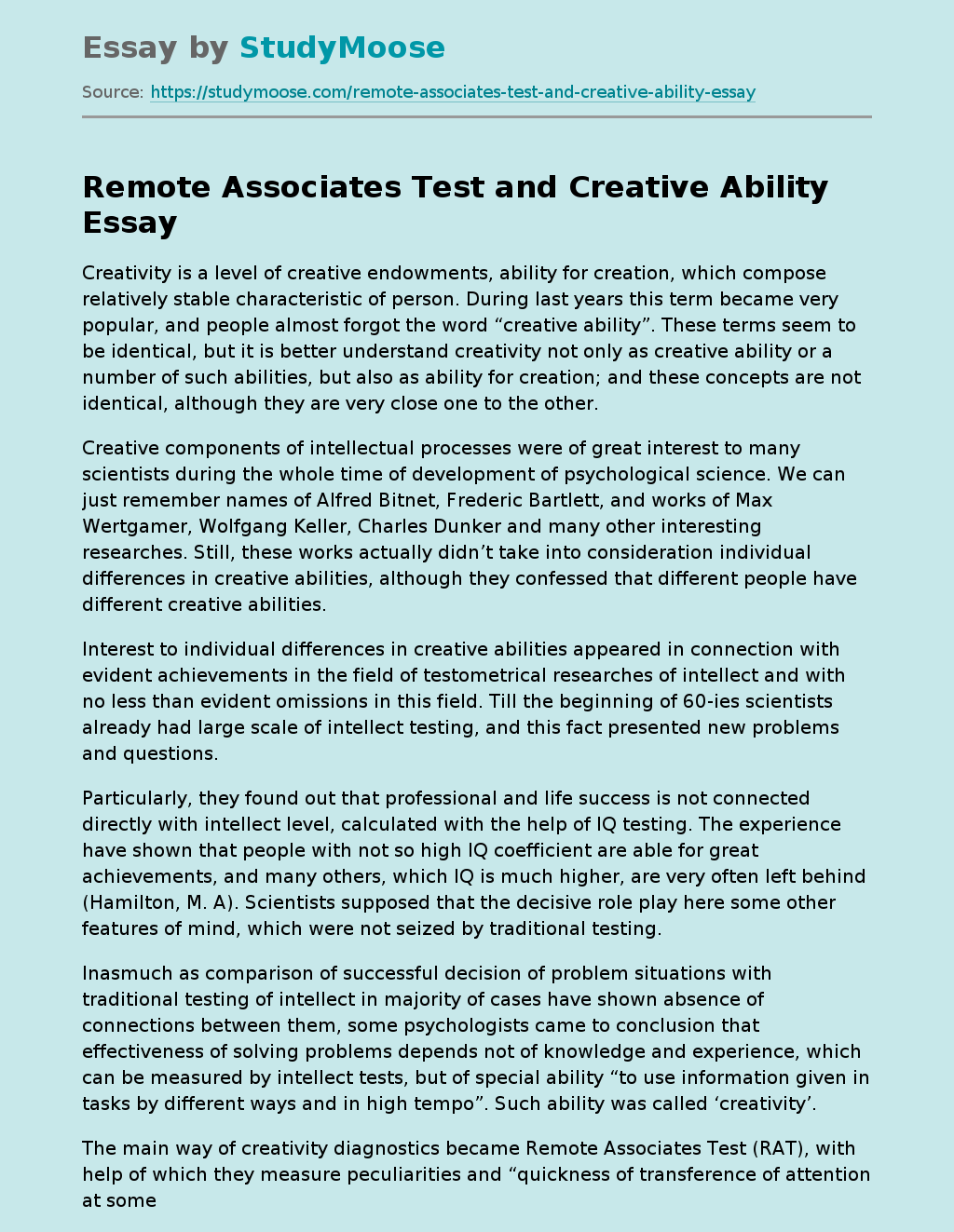