Don't use plagiarized sources.
Get Your Custom Essay on Industrial Pollution Just from $13,9/Page

This form of pollution dates back to antiquity, but widespread industrial pollution accelerated rapidly in the 1800s, with the start of the Industrial Revolution.

The Industrial Revolution mechanized means of production, allowing for a much greater volume of production, and generating a corresponding increase in pollution. The problem was compounded by the use of fuels like coal, which is notoriously unclean, and a poor understanding of the causes and consequences of pollution.

However, industrial pollution also highlights a growing issue: the desire of developing nations to achieve first world standards of living and production. Those countries that are already industrialized want to keep their place in the World Economy, and those that aren’t want a better position in the world economy. As these countries industrialize, they add to the global burden of industrial pollution, triggering serious discussions and arguments about environmental responsibility and a desire to reach a global agreement on pollution issues. Causes of Industrial Pollution

The primary causes of industrial pollution are as follows:
Prevalence of outdated- inefficient technologies that generate a large amount of waste Large unplanned industrial conglomeration that have encroached upon and severely polluted their environs The existence of large number of small scale industries that escape land use and some time even environmental regulations Poor enforcement of Pollution control laws and

Undesirable gases like carbon monoxide and sulphur dioxide cause air pollution. Air pollution affects human health, animals, plants, materials and the atmosphere. Industrial effluents are discharged into the rivers. They include both organic and inorganic matters like coal, dyes, soaps, pesticides and fertilisers, plastic and rubber. These are the major pollutants of water, Industrial water contains toxic metals that pollute land and soil. Unwanted loud noise or sound also causes pollution. Noises cause hearing impairments. Sometimes the solid industrial wastes containing harmful substances are dumped in isolated pockets of land. This results in pollution of land and soil in the nearby regions. Effects of Industrial Pollution

Pollutants given off by various industries and factories are often considered to be one of the prime factors contributing to air, water and soil pollution. According to the Environmental Protection Agency (EPA), it has been estimated that industrial pollution is responsible for almost 50 percent of the pollution present in the United States. There are various wide-ranging effects, as well as serious consequences, of industrial pollution on the ecological balance of the atmosphere. Global Warming

For this reason is called process this also the greenhouse impact. The causes of this problem are mostly the industries and cars that travel around the world. The industries are pumping daily millions of dangerous gasses into our air. The problem arises, when the natural balance is unbalanced. There are coming to may greenhouse gases the in air, as a result of which more warmth is held and the temperature on ground increases. And if carbon dioxide there more ventilate in sit, more warmth is therefore held and becomes it warmer on ground. II} Air Pollution

Air pollution is the contamination of the air by the discharge of harmful substances. Air pollution may be described as contamination of the atmosphere by gaseous, liquid or solid wastes or by-products that can endanger human health and welfare of plants and animals, attack materials, reduce visibility, or produce undesirable odors. As some pollutants are released by natural sources like volcanoes, coniferous forests, and hot springs, the effect of this pollution is very small when compared to that caused by emissions from industrial sources, power and heat generation, waste disposal, and the operation of internal-combustion engines. Fuel combustion is the largest contributor to human caused air pollutant emissions, with stationary and mobile sources responsible for approximately equal amounts.

A substance in the air that can be adverse to humans and the environment is known as an air pollutant. Pollutants can be in the form of solid particles, liquid droplets, or gases. In addition, they may be natural or man-made. Pollutants can be classified as primary or secondary. Usually, primary pollutants are directly produced from a process, such as ash from a volcanic eruption, the carbon monoxide gas from a motor vehicle exhaust or sulphur dioxide released from factories. Secondary pollutants are not emitted directly. Rather, they form in the air when primary pollutants react or interact. III} Water Pollution

A change in the chemical, physical, biological, and radiological quality of water that is injurious to its uses. The term “water pollution” generally refers to human-induced changes to water quality. Thus, the discharge of toxic chemicals from industries or the release of human or livestock waste into a nearby water body is considered pollution. The contamination of ground water of water bodies like rivers, lakes, wetlands, estuaries, and oceans can threaten the health of humans and aquatic life. Some industrial facilities generate ordinary domestic sewage that can be treated by municipal facilities.

Larger the production base, larger is the generation of wastes. Traditionally, these materials have been dumped around the factory site or around the entire city. Rarely, they are put to recycling or safe conversion. All these solid materials dumped on surface of soils are bound to change the chemical and physical nature of soil besides contributing large quantity of pollutants to underground water – whenever rain water passes through them. In most situations, solid wastes has caused problems such as foul smell (sugar and paper industry), disturbed air composition (fly ash from thermal power plants and cement industries) changed the physical nature of soil (coal and steel industrial wastes), as well as radioactive dangers (atomic power plants). Solutions of Industrial Pollution

Much of the pollution can be prevented by careful planning and sitting of industries, better sign equipment and better operation of the equipment. The major means of controlling air pollution are fuel selection and utilization. Smoke may be prevented by use of oil instead of coal in the industries. Now, there are equipments to control aerosol emissions. Some of them are inertial separators, filters, precipitators and scrubbers. Water pollution by industries can be controlled by treatment before discharging them into the rivers. Treatment of industrial liquids can be done in three phases: primary treatment by mechanical process, secondary treatment by biological process and tertiary treatment by biological, chemical and physical processes.

Primary treatment includes screening, grinding, flocculation and sedimentation. Secondary treatment involves use of biological methods. Tertiary treatment includes recycling of waste water. Control of soil and land pollution involves three activities: collection of wastes from different places; dumping and disposing the wastes by land filling and recycling of the wastes for further use.Global warming consequences are thus is too serious to be ignored. Remedial action is complicated by the fact that some individual scientists disagree with the consensus. According to some, the cyclical climate patterns are nothing new. Despite the controversy, governments are taking steps to protect the environment. An attempt is being made to reduce greenhouse gas emissions, and to penalize the emitters. Preventive measures of Global warming 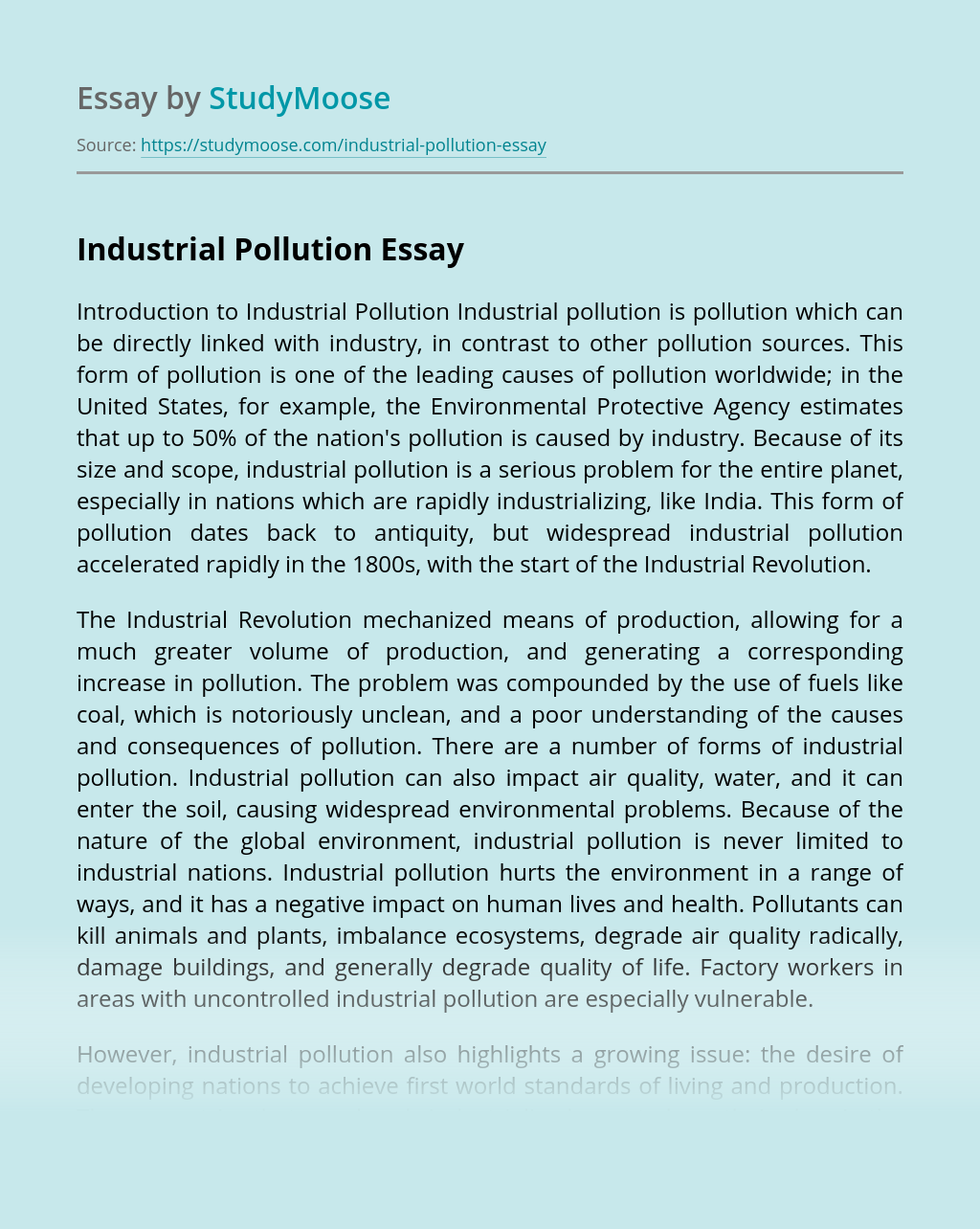 Rate this post Air pollution is one of the most serious problems in the world. It refers to the contamination of the atmosphere by harmful chemicals or biological materials. According to the World’s Worst Polluted Places by Blacksmith Institute in 2008, two of the worst pollution problems in the world are urban air quality and...

Rate this post Environmental Pollution is the most important threat to the human race on this planet today. Environment consists of earth, air, water, flora and fauna. It means adding impurity which threatens the life of flora and fauna to the environment. These impurities are mainly created by man-made activities. The impurity can be air,...

Rate this post Not all people in this nation living in a loud location, the majority of them want to lived in a serene place with trees and fresh air and we all know that most of the time we can focus and believe thoroughly in a peaceful place. Sound pollution can be specified as...

Environmental pollution: its effects on life and its remedies

Rate this post The term pollution refers to the act of contaminating ones environment by introducing certain hazardous contaminants that disturb the ecosystem and directly or indirectly affect the living organisms of that ecosystem. Pollution in general is the activity of disturbing the natural system and balance of an environment. The increase in the pollution...

Causes and Effect of Pollution in Our Environment

Rate this post INTRODUCTION This chapter presents the overview of the topic about the causes and effects of air pollution to our environment. The term air pollution is a mixture of natural and manmade substances in the air we breath such as fine particles produced by the burning of fossils fuel ground level ozone, which...

Rate this post Essay 1 Air Pollution: Causes and Effects It keeps us alive but at the same time, it can also be harmful. We breathe air everyday. Air provides us with oxygen that is essential for living. Nitrogen, water vapor, and inert gases comprise air along with oxygen. Emission of substances that contaminate air...

Rate this post Hong Kong is one of the busiest cities in the world. It is not only prominent as an Asian commercial center, but also famous for its air pollution, which haunts the lives of thousands of Hong Kong people and wastes billions of dollars of the government and the private sectors every year....