An incident of vandalism was reported to the New Orleans Police Department (NOPD) on the 6th of April, 2009. The incident, identified as incident number 24-37792, was first responded on-site by attending Officer Mark P. Deazel (1234567-89). The incident occurred in St. Louise Cemetery 1 around the Basin Street entrance, at the tomb of Marie Laveau. A handwritten testimony was given to the attending officer by the witness, a man by the name of Jim P.

Dupuis, whose identity was confirmed through the driver’s license identification card provided.

Don't use plagiarized sources. Get your custom essay on
“ Incident Report Vandalism ”
Get custom paper
NEW! smart matching with writer

He claimed to have “witnessed the vandalism of the tomb of Mary Laveux” by someone he described as “a heavyset gentleman in his mid to late twenties, weighing approximately 250 to 300 pounds. ” In addition, the witness, who happened to be in the said location and was “touring the cemetery with his peers,” recalls that the incident occurred at “approximately 6:45 PM.

” According to Dupuis, he saw “a gentleman spray painting black X’s on the tomb of Marie Laveux (misspelled, to maintain accuracy with the handwritten testimony).

” He also stated that he “called 9-11” during the course of the incident, also adding that “the gentleman left the cemetery prior to police arrival. ” The witness also described the attire and other details regarding the man he saw; he stated that the man was “carrying a backpack and was dressed in green shorts with a white t-shirt”. Further analysis of the marks created by the suspect on the tomb has been done.

In terms of location, one of the lines is located above while the other one is located to the left, with both locations relative to the door of the tomb.

Also, discovered during the investigation, as directly stated in the report that the suspect escaped by passing tomb # 112, leaping over Conti Street wall, and departing on foot. Inspection of the scene of the incident has revealed that the vandalism was two random lines, contrary to the description of the witness. Several items, not necessarily determined to be belongings of the suspect, were also recovered at the crime scene. The items are as follows: one can of black aerosol paint, two 1mg tables of Xanax, a bottle Absinth spirits or liquor (23.67 ounces), and two bottles of Florida water (4 ounces). The items, being held as possible evidence, are stored at the following address: 400 Poydras Street, New Orleans, Louisiana 70130. References NOPD No. 24-37792-3. Witness details, witness account or statement, Suspect sketch, Site map, and Tomb details. NOPD No. 24-37792-3. Images of markings, Measurements of Markings, and Escape route. NOPD No. 24-37792-3. Evidence data, Evidence count, and Evidence sample images Evidence Video. Sergeant Says section 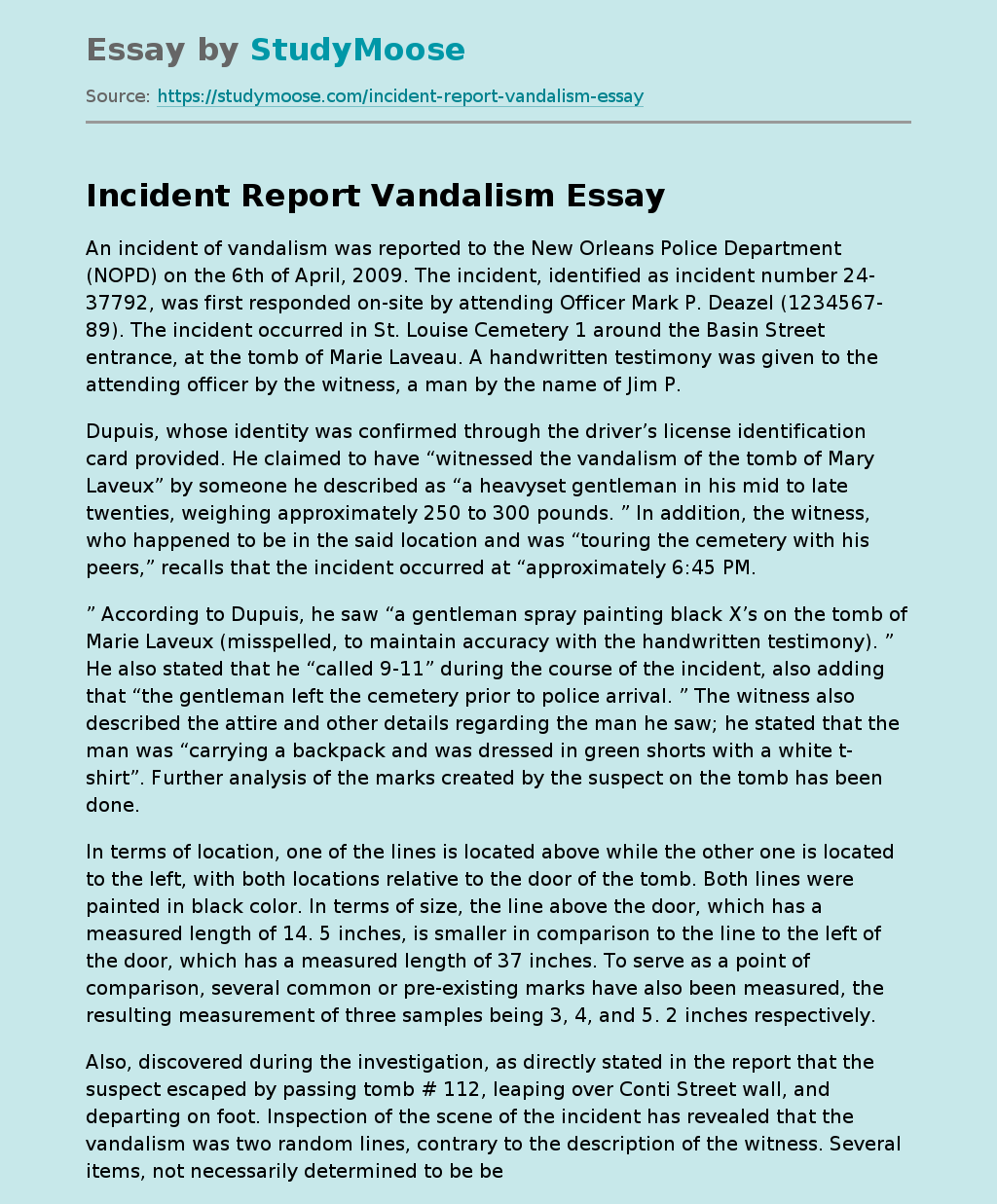