Graffiti is a true art with different meanings that involves many styles and risks that can damage artists physically and socially. Graffiti is an art, not a simple tagging on a trash can or an alley wall but an actual mural that represents meanings in every detail, style, and even every color. How many times have you seen a graffiti mural and asked yourself: what was the inspiration of the making of the mural?

Three arguments in favor of legalizing graffiti are that people shouldn’t judge graffiti also that it’s a way of expressing what the world is going through, and lastly graffiti artists are unfairly punished when they are not a danger to society.

Don't use plagiarized sources. Get your custom essay on
“ Graffiti : art or vandalism ”
Get custom paper
NEW! smart matching with writer

Don’t judge graffiti as “bad” if you don’t know what it stands for. One person who does graffiti in a meaningful way is Obey, who creates communist propaganda. He expresses how he feels and how many people feel about communism. Another person that takes time to express the people thoughts of life is Banksy, he’s one of the most known graffiti artists who’s murals actually make you think of how life is or what the worlds going through .

One of many quotes that Banksy wrote is “ People say graffiti is ugly, irresponsible and childish. But that’s only if it’s done properly”. I feel that when someone goes out on their own time to do posters or a mural representing how people from every society are feeling, they should be rewarded for standing up for their people they are also leaders such as the president standing for the country’s rights.

Graffiti for many people is more then a simple tagging, it’s their way of life.

These artists get up everyday and just draw whatever is on their mind. It could be about a dream, a future goal, or it can even be how they feel about our economy. As you can see in the pictures above, you may think how true are those two quotes. If you look past the quotes, it’s a graffiti mural expressing the daily thoughts of an average person in society.

Expressing what you think shouldn’t be a crime if you’re not hurting another peer ,a simple scribble could be considered a tagging any one from any age can do that just because they don’t consider them self taggers doesn’t mean there not able to write on a wall Graffiti artists go through a lot just to make a mural. Graffiti artists include adults as well as many teenagers who are trying to express their ways of life. Many get arrested and let go but many get put in jail or juvenile hall for minors-giving a bad reputation for the artist later in life.

Many graffiti artist get injured by attempting to do a graffiti piece, anti graffiti citizens go out and attack many artists wile there writing on private properties in many cases gangs get involved causing taggers to get seriously injured and even get killed making a little problem become a big problem. Graffiti is more than a tagging in a alley, though it’s illegal without the property owners say, but with out the owners permission they could express their creativity.

With many people against graffiti and not letting graffiti artists do murals in their property, graffiti artists also known as taggers go out and tag wherever they want, making it a crime. I don’t ask for you to take any actions forward graffiti art but to actually take your time and analyze what the graffiti piece signify and not only judge it, in most cases it was done illegally but really think how it would be if there were legal places where graffiti artist could express their thoughts . 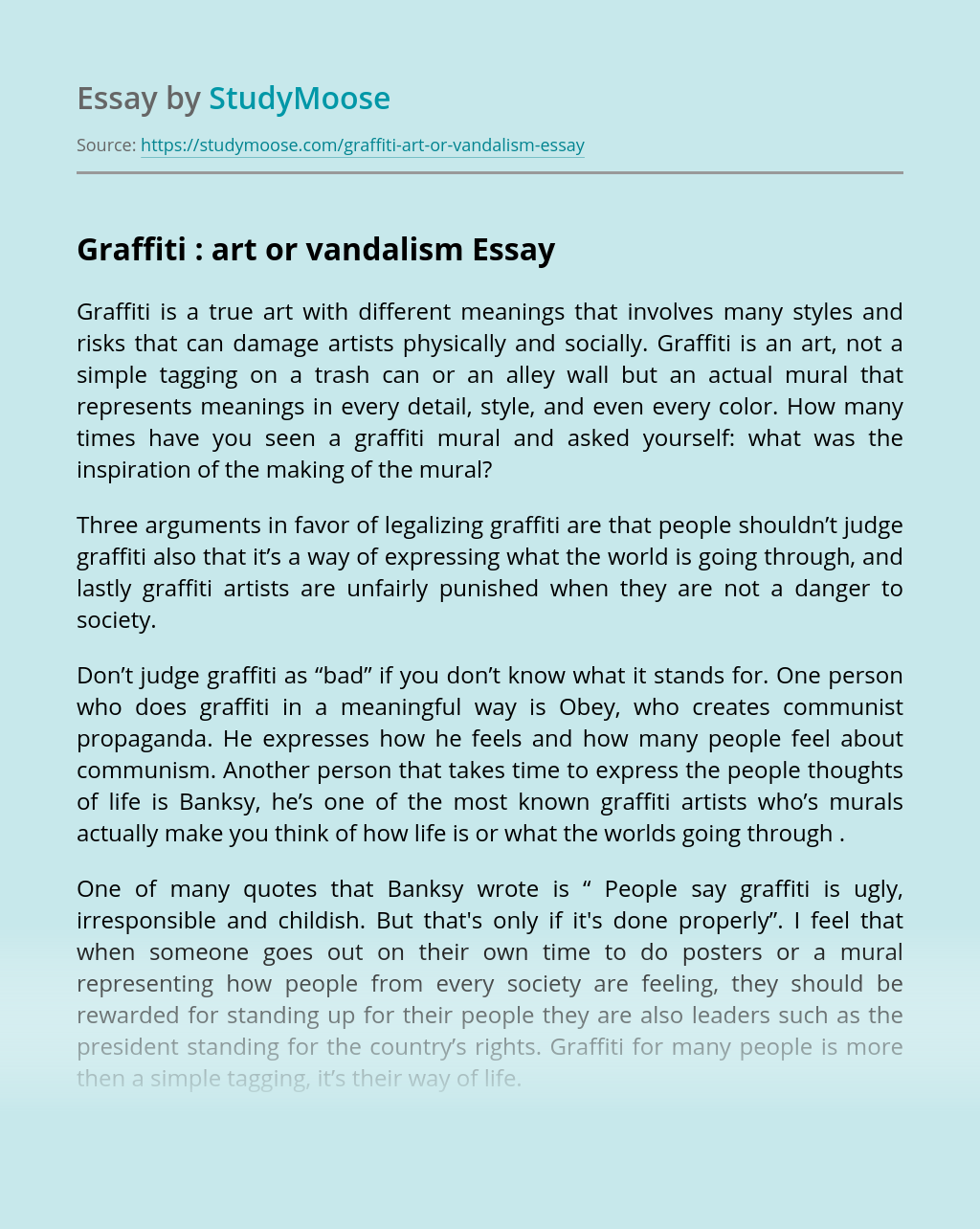