In this essay Judy Brady dives into the negative stigmas of being a wife in a society that didn’t really allow women to do much, and didn’t give women the power that men did during this time, compared to this day-and-age. In the U.S. during the 1960’s, the second wave of the feminist movement was beginning, in hopes of bringing equality to women all over the world, but it didn’t last long, it died down around the late 1970’s.

Don't use plagiarized sources. Get your custom essay on
“ In this essay Judy Brady dives into the negative stigmas of being ”
Get custom paper
NEW! smart matching with writer

The author’s method throughout the entire story was persuasive; she wanted to convince everyone who is reading to analyze the negative stigmas involving the inequality of women, and how men viewed women as inferior, that they had to do everything they needed without complaining, and doing it with a smile on their face.

Brady uses her male friends stand-point and their inherent selfishness to persuade the reader which is mainly single and married women but Brady also wants the attention of the male audience by trying to get them to see how selfish they are and show the expectations of the common wife is. For example,

The following quotes are pieced together from the entire article, and it signifies what the author is expecting out of their wife, something that she was, and went through.

One of the author’s rhetorical strategies throughout the entire story was repetition; she had the intention of getting her point across by doing so. The repletion of the phrase displays to the reader how selfish husbands, and men in general are; it gets her target audience to realize that women are more than just a house-wife that does everything the husband tells them to do. Brady informs her audience numerous times on the needs and expectations desired from women/wives, from men/husbands. For example, she uses “I” repeatedly throughout the entire essay. The reasoning behind the repetition is for the audience to see selfishness and self-indulgence from the male point of view during the timeframe back in the 1970’s. Essentially, Brady effectively uses ethos, pathos, logos, with repetition in order to guide herself into fulfilling her initial objective.

The second, and subtly prominent rhetorical strategies is satire. Although, it may not stick out to the reader, the author uses a form of satire to entice the reader, and get the message across. She is not serious in the story, she doesn’t actually want a wife. For example in the story the author’s sarcasm is very obvious. Brady says,

The tone Brady is using while making these demands isn’t serious, she shows the viewpoint of a man in a sarcastic way to prove her point. Brady finds a way to really make some valid points in an interesting manner. Sarcasm is very prominent in the essay to explain her view on her male friend.

This rhetorical strategy plays on humor and keeps the reader hooked on what it is they’re reading. She’s consistent on her point and the use of sarcasm validates each claim made through her entire article linking all of her ideas. It’s said that sarcasm helps keep a reader’s attention and makes more of an impact. It also has proved to be an effective way of criticizing a topic/thing/person and influencing the reader’s thoughts.

In conclusion, Brady successfully conveys her argument using a large amount of pathos, thrown in with satire and repetition. She uses sarcasm/satire to prove her point of view regarding the selfishness of men/husbands towards women/wives. In the article is used way more than 10 times. The repetition of this phrase is a clear sign of that selfishness she tells about of men displaying toward women is very prominent. Brady’s style encourages a different points-of-view on equality; during the 1960’s women were being oppressed by men and seen as inferior, and this article challenges those viewpoints in hopes that the negative stigma is abolished and women are seen as equal.

In this essay Judy Brady dives into the negative stigmas of being. (2019, Nov 24). Retrieved from https://studymoose.com/in-this-essay-judy-brady-dives-into-the-negative-stigmas-of-being-example-essay 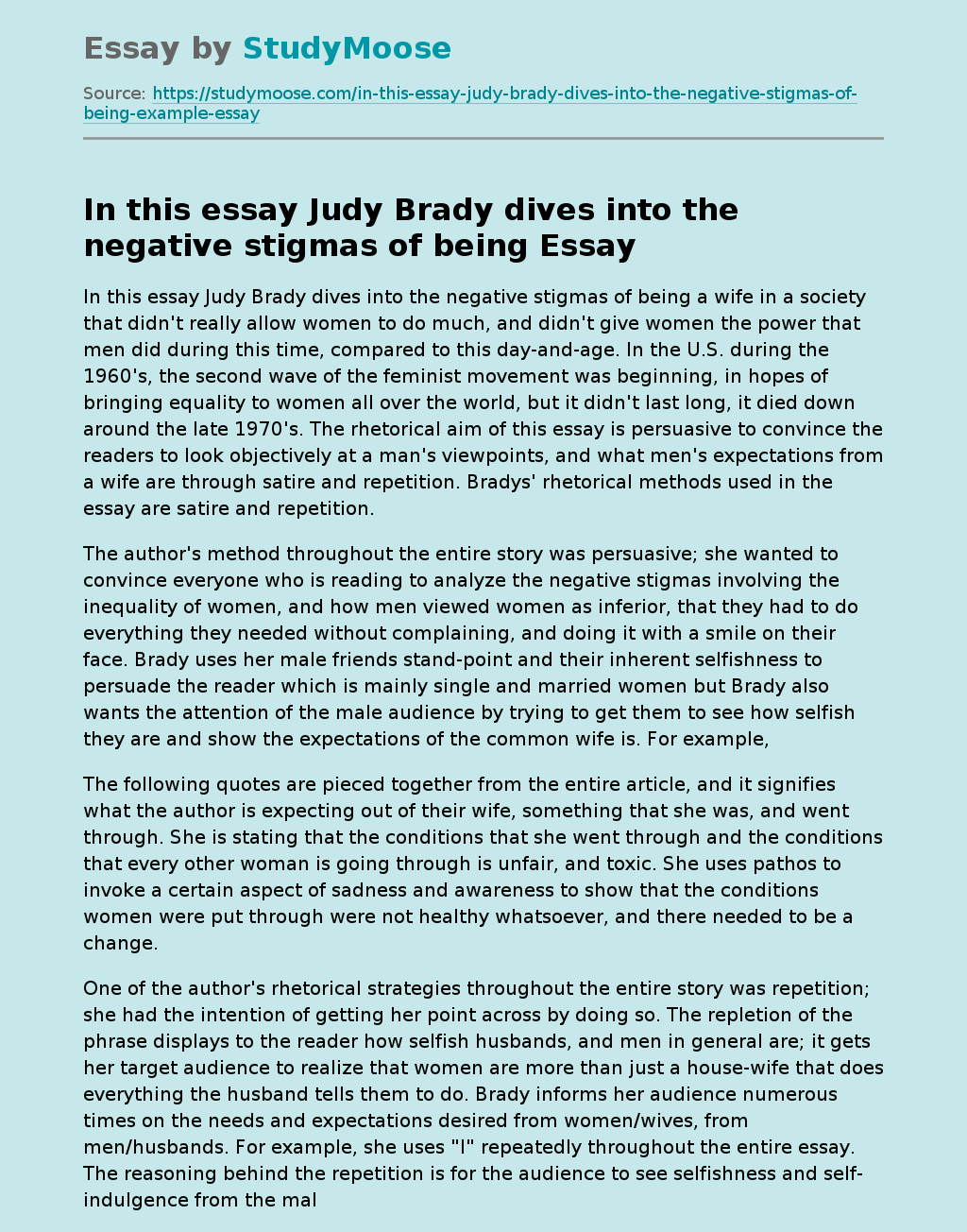