“Winter Dreams”, one of the greatest works of F. Scott Fitzgerald, has successfully depicted the downside of the so-called American Dream in his time. The story described the frustration of people who had defined their happiness as material success. Beside the protagonist Dexter Green, there was another character that made readers preoccupied with conflicting ideas after reading the story. She was Judy Jones, the center of Dexter’s winter dreams. In this essay, we will examine this character to see whether she was a statue of woman beauty, a devil who kept hurting other people, or a victim of such a material society.

Don't use plagiarized sources. Get your custom essay on
“ Judy Jones – beauty, devil, or victim? ”
Get custom paper
NEW! smart matching with writer

First of all, we must admit that Judy Jones was a masterpiece of God. When it comes to an attractive girl, we can definitely take Judy Jones for an excellent example. Judy, in the author’s description, was a gorgeous young girl whose charm was composed of a striking appearance, a great sense of style, and a magnetic personality.

To plenty of men, Judy was an extremely adorable girl with whom they couldn’t help falling in love. Almost every man in the story had to admit that Judy was greatly good-looking. Dexter, the protagonist, had recognized Judy’s potential great beauty when she was just eleven. He depicted little Judy as an “inexpressively lovely” girl who “brings no end of misery to a great number of men”. When Judy turned twenty, she became an irresistible beauty with a slender figure, passionate eyes, picturesquely beautiful complexion, and especially, an appealing down-turning mouth that “gave a continual impression of intense life and vitality”.

Additionally, Judy’s stylishness made her become more appealing. Her costumes not only perfectly fitted her but also made her stand out in any situation. She once showed up at the golf court so gracefully in “a blue gingham dress”, which got many men’s attention. Another time, she suddenly appeared in such a healthy and attractive manner on a racing motor-boat with an eye-catching pink bathing-suite on her beautiful body that Dexter couldn’t do anything else but complying with all her requests. When Dexter met her again at the dancing club after a long time, she still looked as pretty as a doll in a sparkling gold dress.

Moreover, Judy’s charm was fortified with a special personality. Though a slender girl, she not only knew how to swim or dance but also knew how to surf on the sea and drive a motor-boat with no difficulty. She was always aware of her charm, always confident, and friendly towards the man she was interested in. Also, she was not afraid of actively asking a new acquaintance on a date and did make it become a romantic and memorable date than ever. That she knew how to make a man happy with fulfillment was so true since Dexter, during his life, would never forget the moment (though short) with Judy on the dark sun-porch, deeply in the passionate kisses. Hence, generally speaking, Judy was a dream girl for plenty of men.

What is more beside Judy Jones’ great looks? Surprisingly, it is a not very beautiful soul, or critically speaking, a cruel nature of a devil. As an eleven-year-old girl, Judy Jones had adopted an incorrect etiquette. She was so rude when addressing Dexter as “Boy” while she was obviously younger than him. Besides, she couldn’t conceal her bad temper when having something unsatisfying. Not seeing any caddies available to serve her, Judy vented her anger on Mrs. Hilda-her nurse by “taking one of the clubs, hitting it on the ground with violence”, and wildly shouting at Mrs. Hilda that “You damn little mean old thing!”. When Judy entered adulthood, the cruel side of her nature became clearer. One of her disgusting qualities was once again the impoliteness. She seemed amazingly unconcerned and unapologetic when hitting Mr. T.A. Hedrick in his stomach with a stray ball.

Furthermore, Judy Jones was a statue of a material girl who judged a man only by his material success and seemed to ignore the moral value. On the first date with Dexter, Judy straightforwardly told him about her recent upsetting love affair with a man who, in her words, “was as poor as a church-mouse”, and boldly asked Dexter “Are you poor?”. What if Dexter had said “Yes”? Logically, she might have thrown him out of her life at once!

Judy Jones’ cruelty was explicitly revealed through her selfishness, wilfulness and impulse-driven behavior. She was always trifling with others’ affection. When she was interested in a man, she did not hesitate to take advantage of her charm to achieve her goal – making him crazily love her. Nevertheless, once losing the excitement, she mercilessly kicked the guy out of her current life and looked for a new delight. Her wickedness, however, did not stop at the “new one in, old one out” attitude towards love. When the miserable neglected man gradually forgot her and was about to start a new life, she tried to draw his attention back by “granting him a brief honeyed hour, which encouraged him to tag along for a year or so longer”, then left him, hurt him again, and of course, non-stop looked for another interesting guy to fulfill her desire. She acted wickedly regardless of others’ feelings as if she had had the right to do it. Dexter was one of the most miserable victims of Judy’s love games. He was suffering not only from being neglected again by Judy but also from regretting giving serious hurt to his fiancé Irene Scherer and her parents. Obviously, Judy Jones’ selfishness had given pains to plenty of people.

Why was Judy Jones such a disgusting devil? Were there any sensible reasons for this, which are worth our sympathy? Firstly, Judy Jones was born with a silver spoon in her mouth and with a great beauty that could help her win almost every man’s heart. She lived an extravagant life with plenty of elite suitors always around. That she could acquire what she wanted effortlessly made her appreciate nothing. She hardly had any meaningful interests in her life except flirting men around. She assumed that her radiant beauty was a master key to the happiness, but her upsetting married life at the end of the story proved that she was completely wrong. Her unhappiness afterwards resulted from the emptiness of her soul and an intensive desire for what is so-called happiness that she couldn’t know how to achieve and even couldn’t define. That was why she once cried and complained to Dexter: “I’m more beautiful than anybody else. Why can’t I be happy?”. The fact that she kept hunting for joy with different men gives us an impression of her illusion and disorientation in her journey to seek happiness. No matter how popular, rich, and even talented a man was, Judy couldn’t find a permanent sense of fulfillment with him. She just sought a man to fill the emptiness in her soul. Secondly, we must take a look at the society in which Judy grew up – a society that placed material success over moral values. Therefore, that Judy Jones adopted such stereotype and judged a person by his wealth was not incomprehensible. Poor Judy failed to understand what true love was and consequently, did not know how to have it. The last reason we can think of is the lack of adequate parental guidance from her childhood. Her parents were rich, but like other people in that society, they must have concentrated only on earning money to fortify their social status. Through the story, readers can see that the bond between the Jones’ members appeared not to be so close. While Irene’s parents were described as kind and caring people, Mr. and Mrs. Jones were usually said to be absent from home. Moreover, we can notice the image of a Judy surrounded by her servants and boyfriends, but we hardly ever find any interaction between Judy and her parents. Living prosperously but being neglected by parents, Judy was given a chance to develop such a misconception of love and happiness.

Judy’s endless search for satisfaction seemed to burn itself out by the end of the story. She got married to Lud Simms – a bad husband. She lost her good looks and devoted herself to her children. Judy Jones, the symbol of Dexter’s larger-than-life dreams, then became a boring Judy Simms. Many readers may feel satisfied with this ending since Judy ought to pay for all the pains she had caused to other people. However, if we give ourselves a pause for rethinking, we may somehow feel sorry for her. Judy was, by no means, a devil from birth. She was just a victim of the society in which she was born and grew up. To conclude, if we could give something to this character, we would give her just a moderate look, not a great beauty. Were it so, she wouldn’t have had any “weapon” to hurt so many men, and she might have got a more peaceful life. 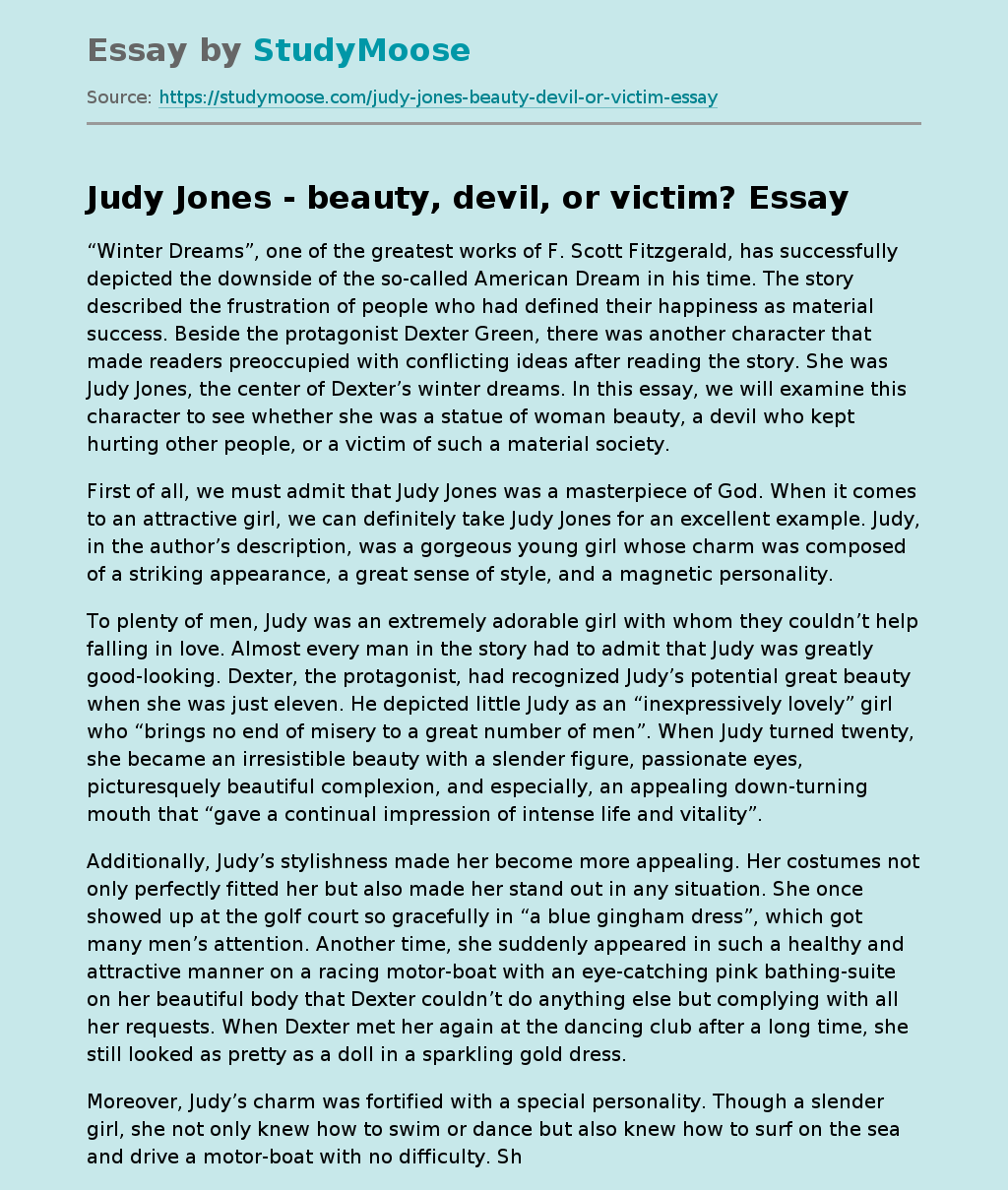