In Search of Respect: Selling Crack in El Barrio

Philippe Bourgois book In Search of Respect: Selling Crack in El Barrio was published in 1995, and discussed his experiences of authors living in El Barrio (East Harlem). In 1985 the writer moved to this district of New York City with the purpose of studying the impact of imposed racial segregation and economic marginalization on the inner city Puerto Rican population (intro pg. 1). An interesting new insight into the street culture found in New York was captured in this book. The amount of poverty in this portion of our country is much higher than that in most other areas.

Don't use plagiarized sources. Get your custom essay on
“ In Search of Respect: Selling Crack in El Barrio ”
Get custom paper
NEW! smart matching with writer

Bourgois presents the theory “culture of poverty” which seems to argues that poor people share deviant cultural characteristics. The poor have lifestyles that differ from the rest of society and that these characteristics perpetuate their life of poverty. The poor are qualitatively different in values and these cultural differences explain continued poverty. He argues that this neighborhood, which is well known for high rates of violence, does not have widespread violence occurring amongst all of its members.

The higher crime rate, argues Bourgois, occurs for the most part within the factions of the underground economy, and social relationships. With an unbiased sight the author looks at the underground economy, from baby sitting, off-track betting, to drug dealing, as these were the means which most of the families living in El Barrio were able to survive. This book is generally a synopsis of the events that occurred during Bourgois stay in El Barrio. The original purpose of the book was to write a first-hand account of racial prejudice and ethnic segregation in the heart of one of the worlds largest cities.

Bourgois was swept into the area drug economy because of the abundance of information from the dealers and their families who all lived within the immediate area. Most of the accounts given in the book come from a single crack house near Bourgois tenement. The group of crack dealers filtered through Bourgois presents a compelling argument that reform within the economy needs to take place in order to reduce the amount of violence within the inner-cities of the United States. Bourgois states that there is a strong feeling of community among the people living in El Barrio.

The racial and ethnic prejudice of the El Barrio outsiders has lead the residents of the city to isolate themselves from the rest of the American society. The isolation and aversion of these people by the rest of the world has lead them to the situation when their daily struggles for subsistence and dignity at the poverty line, (intro pg. 2) became not successful any longer. The drug dealing has swallowed all of the attempts of these people to find a decent place in the society, and selling crack became the only way for inhabitants of El Barrio to at least survive.

At some point of time the author tries to find the answer to the question of why did all that happen. He asks, in studying the street culture, how does growing up in an environment like that affect one in their ability to function productively in mainstream society? Bourgois goes back and looks at the history of Puerto Ricans, from Puerto Rico to New York City, all through the history of these people on American continent, and puts into perspective, how that helps shape their culture in El Barrio.

Bourgois conducts his research for this book by putting himself in direct daily contact with the subjects of this book. Through participant observation, he was able to delve deep into the personal lives of the crack dealers, addicts, and people effected by the epidemic. He also attended holidays and family function in order to get a more humanistic and holistic view of this society.

The answers found by the author were shocking but not surprising. The social perception and culture that defines Puerto Ricans is the exact thing that inhibits them from success (ch. pg. 142), and just returns them to street in search of other means to make a living. Family seemed to be majorly effected by this outbreak. By destroying the so-called mother-nuture instinct, and by disabling their children during their tenderest ages, vulnerable mothers escape the long-term agony of having to watch their children grow up healthy, energetic adolescents, only to become victims and protagonists of violence and substance abuse. (ch. 7 pg. 285) Many examples of this were portrayed through Candy’s life with her son Junior.

He was the first boy Bourgois watched graduate into crack dealer status. Due to the outbreak, jobs were also effected. The only jobs that provided enough money for the Harlemites to survive on, without having to engage in some other illegal activity, are high risk construction jobs, which were ran by racist mafia backed unions (ch. 4 pg. 162), or entry level jobs in the F. I. R. E. (finance, insurance, or real estate) sector (ch. 4 pg. 142), where the impoverished Puerto Ricans did not have enough cultural capital or the proper ethnic background to survive in the positions being offered.

When ever they did get a job in one of these areas things wouldnt go very well. For example, in the construction jobs, they would either be cheated out of wages and overtime (ch. 4 pg. 165), or when they got a job in the F. I. R. E. sector, they would have to put aside their values and norms and go against everything they were taught through their culture. The racial attitudes of civilized people did not allow the Puerto Ricans (who often outsmarted whites, and performed better at the jobs) to succeed in their career development.

Puerto Ricans would oftentimes have to be subordinate to women barking orders at them, and they would have to deal with ethnic stereotypes. Anytime they came into contact with mainstream society it would be a demeaning, humiliating, and negative experience. Thus, these types of experiences would future alienate them from mainstream society and drive them into the underground economy of crack, the only place where they can go to make money, and regain a certain sense of dignity and respect.

To survive financially outside of mainstream society, one must manipulate all of ones available resources to make a livable income. So, in the underground economy this can mean anything, from taking advantage of the welfare office, to selling drugs, or robbing people, all of which were employed by most of the subjects in this book. Although the world of the underground economy is very chaotic, it all seems to revolve around one thing – crack.

The Puerto Ricans suffered lees from crack physiologically than socially. This nationality usually served as barrier between the drug sellers and police when resolving criminal issues. The outcome of this situation was definitely unfavorable to general Puerto Ricans. On one side they did not belong to the criminal part of El Barrio (with its multi million dollar turnovers), and on the other side the rest of the New York City perceived them very negatively.

The poverty of culture seemed to be connected with the idea that the people lived through the hard times with drugs primarily. Though Philippe Bourgois book is not about the problems of racism and ethnic discrimination, but about the underground economy of El Barrio with its effect on life of the rural inhabitants of East Harlem, the underlying foundation for the development of this type of economy was the social prejudice about Puerto Ricans and their abilities to function in the modern civilized society of whites.

In Search of Respect: Selling Crack in El Barrio. (2016, Sep 14). Retrieved from https://studymoose.com/in-search-of-respect-selling-crack-in-el-barrio-essay 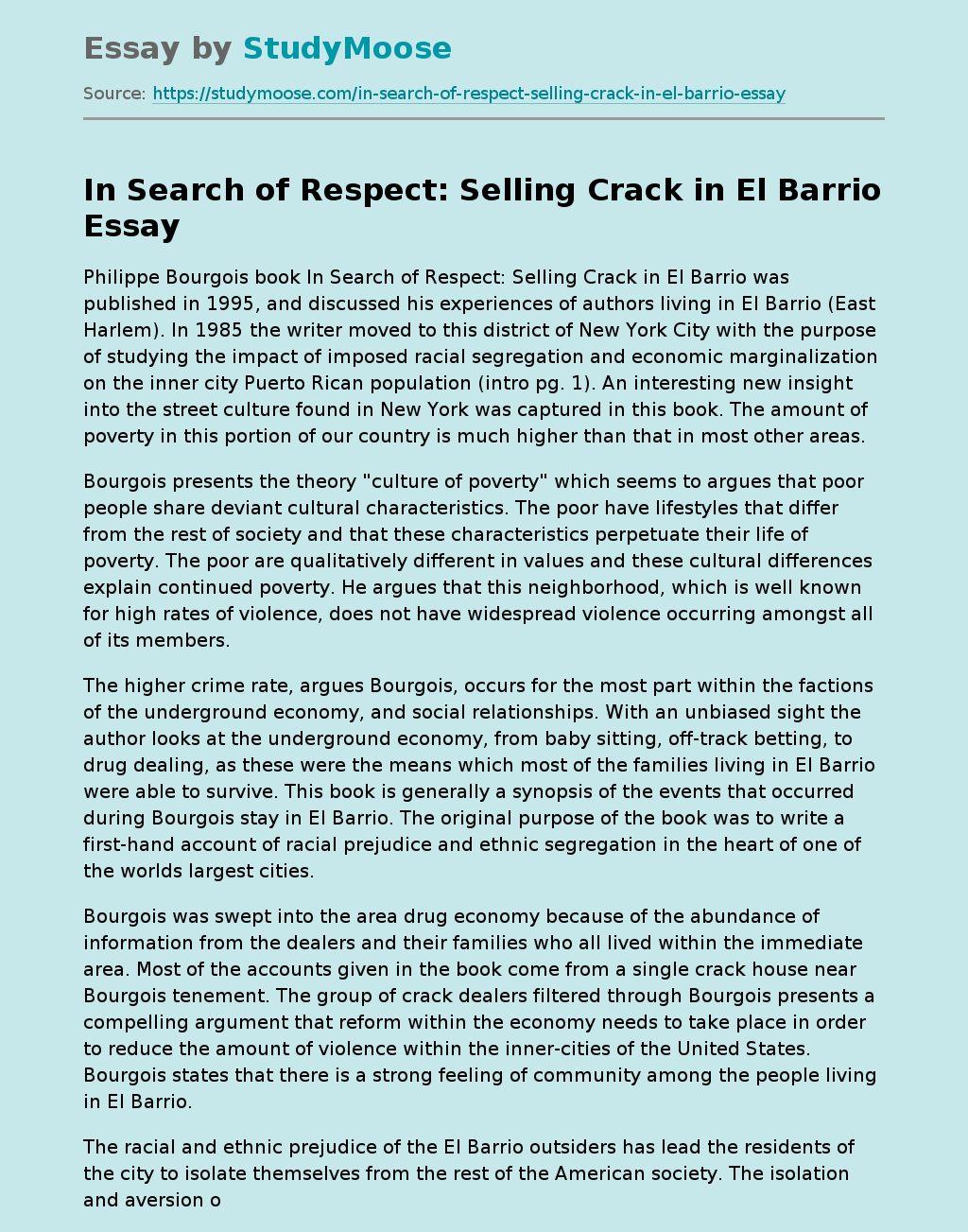