In human communication, the spoken and unspoken words belong to both the sender and receiver

Communication is the process of sharing meaning with others. The sender is the person who sends the massage and the receiver is the person who receives the massage. There are encoding and decoding processes that happen during this stage. The sender encodes his idea or thought into a massage. For instance, there is a policeman staring at you, and you somehow notice the action and panic.

The exchange between sender and receiver occurs. As the receiver, when you notice his action, you will decode the body language and his serious facial expression and you will think that as a sign that you’re in trouble.

Don't use plagiarized sources. Get your custom essay on
“ In human communication, the spoken and unspoken words belong to both the sender and receiver ”
Get custom paper
NEW! smart matching with writer

This can be seen through his body language for instances, body gestures, facial expressions and even eye contacts. This explains the theory given by Verderber that non-verbal communication and verbal communication can be both happen at the same time.

In communicating with each other, language is one of the compulsory features that are required. According to Rudolph F. Verderber, language is
the body of works and system for their use in communicating that are common to people of the same community or nation, the same geographical area, or the same cultural tradition. If the spoken language used by the sender is not as same as the receiver, it will lead to the problem in conveying the massage.

Body language as opposite is universal and can be understood by almost everyone around the globe despite of their nationality, races, genders or even their mother’s tongue. Smile for an instance, sending the message that the doer is happy, friendly and also in a good mood. Shannon and Weaver are the creators of the first communication model. This model was first created to show how the radio and telephone is working.

There are three major parts of this model which ate sender, channel and receiver. The sender will encodes and transmitted the messages in form of binary code or data through the channel. The receiver then will receive and decodes the data into understanding messages. Plus, during the process of sending the messages, there may be some interruption or noise happened either internally or externally. This may due to the imbalance hormone, lack of information, crowd noise or even health problem. Communication begins with self. This principle explains how one’s experiences and knowledge affects his or her ways in treating and communicating other people.

Experts also agree that people are products of how others treat them and of the messages others send them. I quoted Carl Rogers, “every individual exists in a continually changing world of experience of which he is the center.” Someone who experienced either bad or good experiences in his past will have already prepared if the same situation occur again. For example Ali was once been scolded by his lecturer when he did nit hands in the assignment during the due date, this will become a turning point or lesson for him so that in the future he won’t repeat the same mistake again. Communication at the same time is also complicated.

The combination of verbal, non-verbal, behavior and attitude of speakers, the intonation and other factors when they combine will make the messages hard to be understood. Moreover, the usage of high-level vocabularies, the complicated structures and uncommon term will make even the simplest message hard to comprehend. As conclusion, in ensuring the communication between two parties is successful, they must have the most important aspect of communication, which are mutual respect and mutual understanding.

In human communication, the spoken and unspoken words belong to both the sender and receiver. (2016, Mar 08). Retrieved from https://studymoose.com/in-human-communication-the-spoken-and-unspoken-words-belong-to-both-the-sender-and-receiver-essay 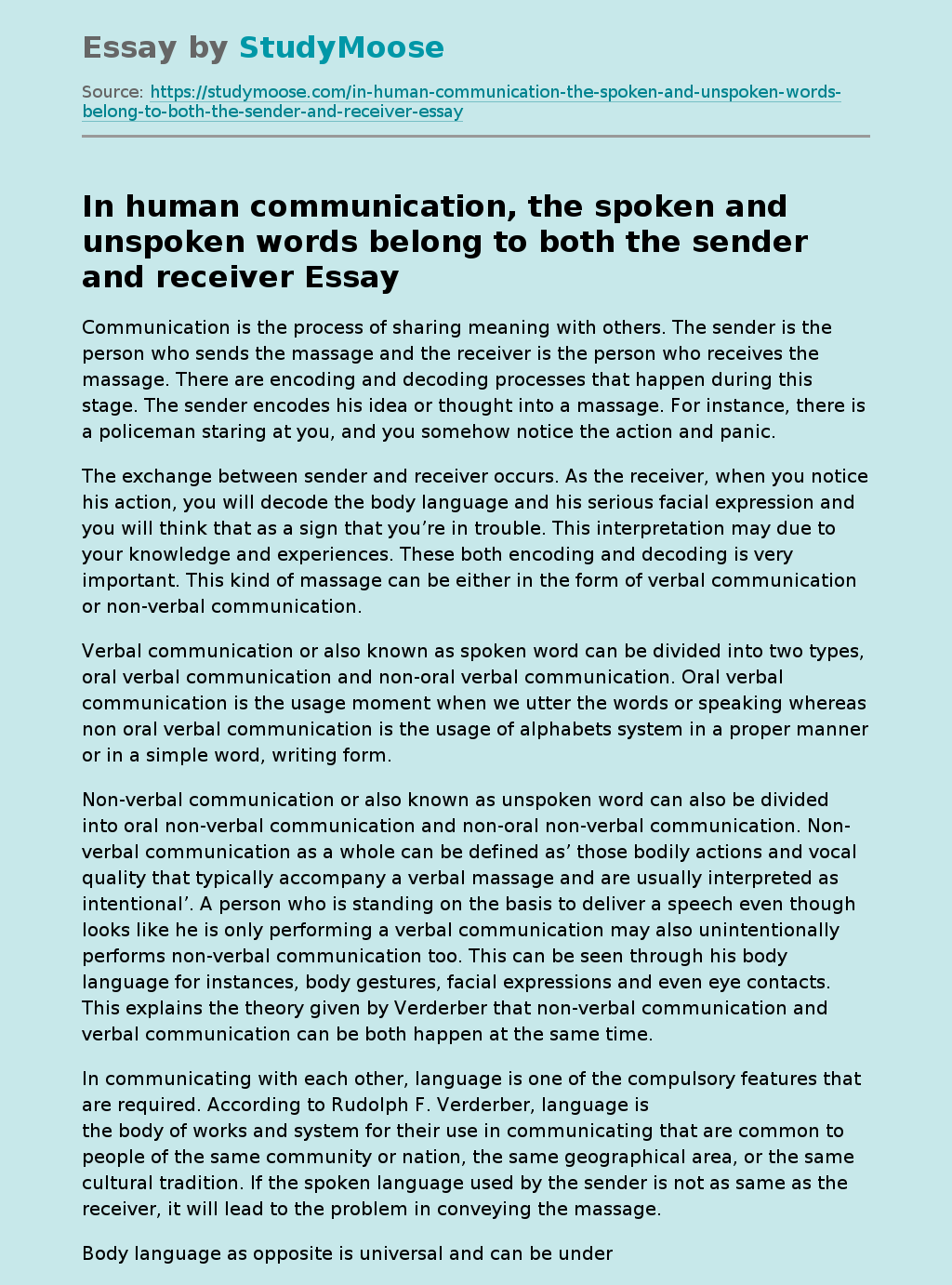