Importance of movement in child development

In a Montessori Tides classroom, there are carefully designed didactic materials that incorporate all the senses in the learning process. The hands which, according to Dr. Maria Montessori, “are the instruments of man’s intelligence,” work together with the mind. Freedom of movement grants the child the opportunity to observe and explore the prepared environment. Constantly the Montessori child actively uses and refines her senses as she absorbs the world around, while the child in the traditional classroom is generally confined to her desk, left almost exclusively to listen.

Don't use plagiarized sources. Get your custom essay on
“ Importance of movement in child development ”
Get custom paper
NEW! smart matching with writer

The child in a Montessori Tides classroom is thus an active rather than a passive learner, who makes good use of all her senses while freely moving about the prepared environment. Furthermore, movement is connected to spiritual development. Physical activity nurtures the whole being, including the spirit. Montessori acknowledged, “If muscles which should normally be functioning are dormant, there is not only a physical, but a psychic depression as well. This is why action can have an influence also upon one’s spiritual energies.

Without activity a child energy supply is depleted, causing learning to be a more difficult task than it would be if there was a freedom to move. Dr. Montessori emphasized, “In fact, it is only by movement that the personality can express itself.” Freedom of movement clearly relates to freedom in general. Montessori believed that a child who is in control of herself, prepared to make rational choices and resist fleeting, illogical temptations is free. Consequently, freedom goes hand-in-hand with responsibility and self-discipline.

Within the prepared environment, the child is allowed to develop her focus, become self-disciplined, and act responsibly. She is thereby able to become truly free. It is a catch 22 though; a child must initially be given freedom to learn to exercise responsibly, as a child in a Montessori Tides classroom is. She is free to move and make choices about her learning. There are limits, however; she is certainly not free to waste her days and disturb other children. “A child who is free to act not only seeks to gather sensible impressions from his environment but he also shows a love for exactitude in the carrying out of his actions.” In essence, freedom, including freedom of movement, permits a child to act responsibly, and responsibility, in turn, brings about true freedom.

Finally, movement ties together the physical, intellectual, and spiritual being. It keeps the entire person healthy. Both the spirit and the intellect depend on action to gather ideas and express themselves. The “child is a discoverer” by nature, and it is through this active discovery that she learns. The Montessori Method takes advantage of this by offering the child freedom of movement. Actually freedom of movement is a significant portion of the whole notion of freedom found in the Montessori Tides classroom, and it along with sensory education pave the way for developing the intellect as well as the spirit. “Through movement, [the child] acts upon his external environment and thus carries out his own personal mission in the world.”

Importance of movement in child development. (2016, Apr 08). Retrieved from http://studymoose.com/importance-of-movement-in-child-development-essay 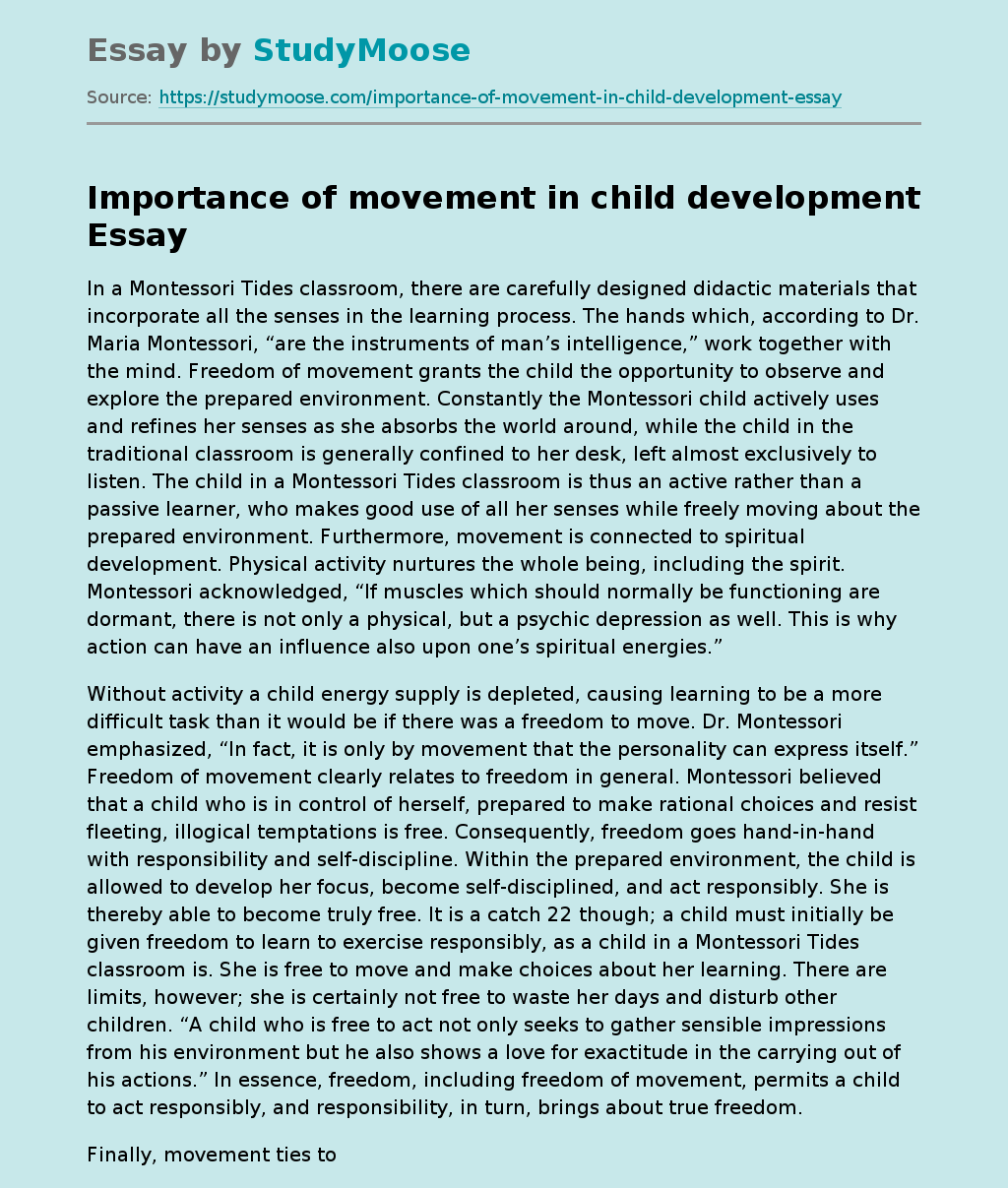