In other areas, hunting and non-commercial fishing are mainly seen as a sport or recreation, Many Amazon species, including peccaries, agoutis, turtles, turtle eggs, anacondas, armadillos, etc.

Proficient in: Importance Of Wildlife Conservation

are sold primarily as food. Others in these informal markets, such as monkeys and parrots, are destined for the pet trade, often smuggled into the United States. Still… So why is wildlife conservation so important? Why should we care? Aside from the emotional reasons and the fact that we are losing the beauty of our planet and destroying our fellow creatures, it is important in order to preserve biodiversity, the diversity of biological life upon our planet. The earth is a living ecosystem, a fragile system of interdependence and balance.

How Human Survival Depends on Environment

Our own survival as a species is dependent upon the preservation of biodiversity and is tied to the survival and vitality of every living thing on this planet. For instance, honeybees and other insects are vital in the pollination of fruit and vegetable crops which humans use for food. Over one billion people globally depend on fish and seafood for their primary source of protein. Meat consumption from a number of wild species is critical in many impoverished countries that depend upon these animals for their food nd livelihoods.

In addition, microscopic organisms are also tied to the process of crop growing, as well as photosynthesis and oxygen production. Wildlife conservation is also important because humans have a vested socioeconomic interest in the continued sustainability and biodiversity of the earth’s ecosystems. The economic impact alone in the form of goods and services that are dependent upon healthy ecosystems is staggering — $33 trillion dollars per year.

The biggest threat to the earth’s flora and fauna is habitat destruction and degradation, followed by overexploitation of species through hunting, fishing, harvesting, and economic trade. These are areas that can be controlled and managed with better practices. Other reasons for the endangerment of wildlife include pollution, disease, and alien species invasions. Global warming and climate change are also contributing factors. As ecosystems change due to increases in planetary temperatures, this results in the disappearance of the natural habitats where animals, birds, and other wild creatures live and threatens their survival.

Wildlife conservation efforts are aimed in several main areas. These include the creation of nature sanctuaries where wildlife can live protected and free from harm, and where scientific studies can be conducted to better understand the threats to various species and what solutions are needed to ensure their survival. Captive breeding and subsequent reintroduction into the wild is often necessary for species that are severely threatened.

In addition, restrictions on the use of pesticides, herbicides, and other toxic chemicals, as well as governmental policies and legislation supportive of conservation efforts are also extremely important. For example, theEndangered Species Act of 1973 is a law which places endangered species under federal protection, and has helped to save the most threatened animals, birds, and other wild creatures from the brink of extinction. Governmental policies and legislation such as this are crucial for the long term preservation and protection of wildlife. 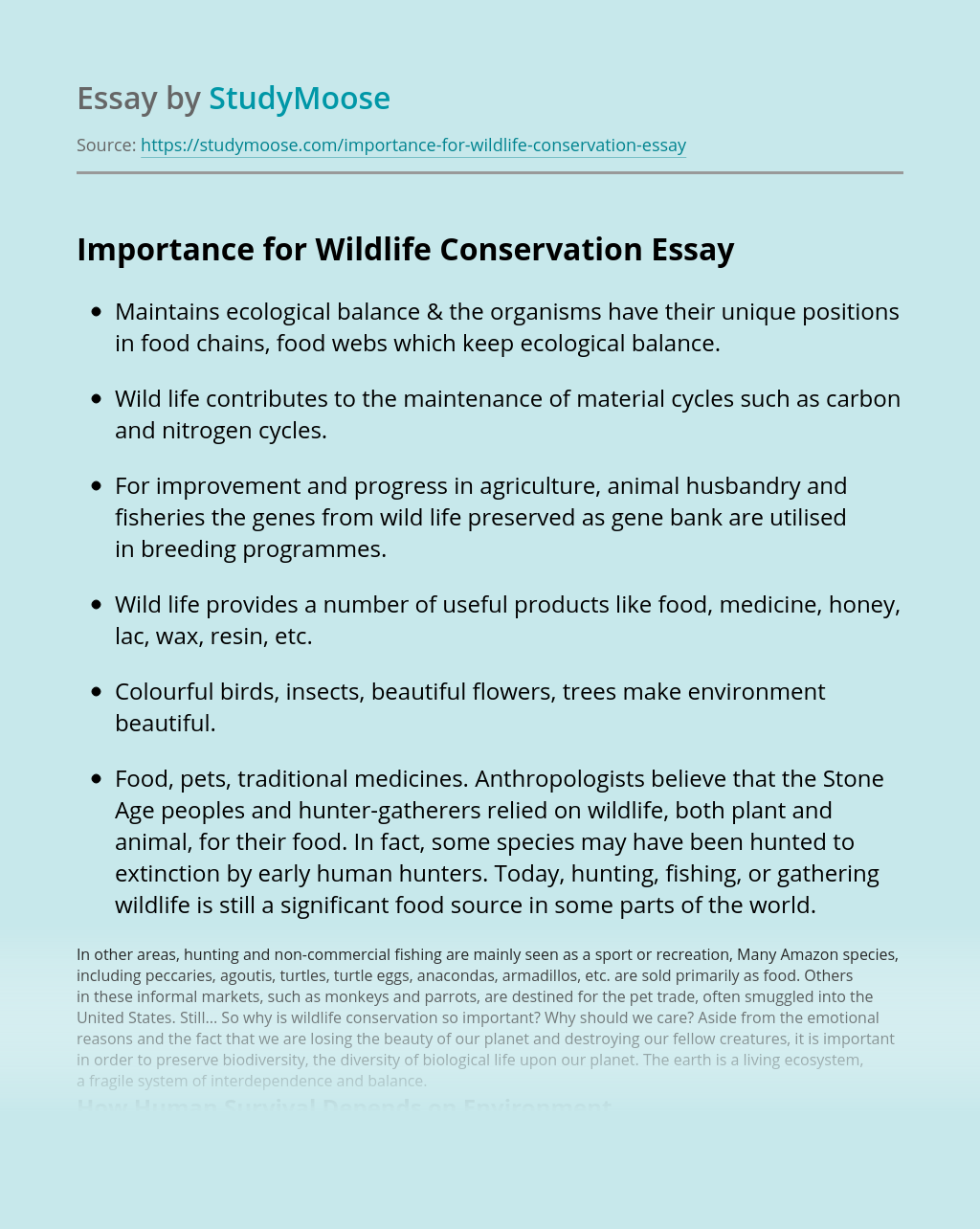 Turn in your highest-quality paper
Get a qualified writer to help you with
“ Importance for Wildlife Conservation ”
Get high-quality paper
Helping students since 2015
Stay Safe, Stay Original