Have you ever wanted something because you felt you deserved it? Throughout history people have wanted to expand and take what they wanted. It is human nature to want things and set goals to acquire those wants. Imperialism was a proper and legitimate course of action for the U.S.

Imperialism is the proper thing for America to practice. Reverend Josiah Strong wrote Our Country stating, “The highest civilization will spread itself over the earth. “This means that Americas are better than all the people who we took the land of.

Don't use plagiarized sources. Get your custom essay on
“ Imperialsim – proper and legitimate course ”
Get custom paper
NEW! smart matching with writer

Alfred T. Mahan wrote The Interest of America in Sea Power which says, “The growing production of the country demands it.” This means that America needs to expand to allow more people to purchase our products. President McKinley said, “we could not leave them to themselves they were unfit for self government.” This means that our way of government is so much better than theirs in our eyes that we must take over them to help them prosper.

Albert Beveridge, a Republican senator from Indiana said, “Almighty God He has marked us as His chosen people.” This means that it’s our god given right to pursue more land. Henry Cabot Lodge stated “Taking Philippines does not violate the principles of the Declaration of Independence, but will spread them among a people who have never known liberty.” This means he want us to force freedom on the Philippines and eventually more people.

Imperialism is legitimate and proper however some people disagree with this statement.

Senator George F. Hoar says “under the Declaration of Independence you cannot govern a foreign territory, a foreign people, another people than your own”. This being said means that many things America has done goes against the declaration which is unjustifiable. Anti-Imperialist League said, we hold that the policy know as imperialism is hostile to liberty and tends toward militarism, an evil from which it has been out glory to be free.” This is basically saying that imperialism is evil and goes against liberty.

In conclusion, Imperialism was a proper and legitimate course of action for the U.S. Imperialism is a very controversial topic that can prove to be just or not in many ways. In the end if America did expand we would of wasted or true potential to be what we are now. If one this imperialism isn’t just how ever then why will there option matter because without land there would be overpopulation and lack of commonly used resources. 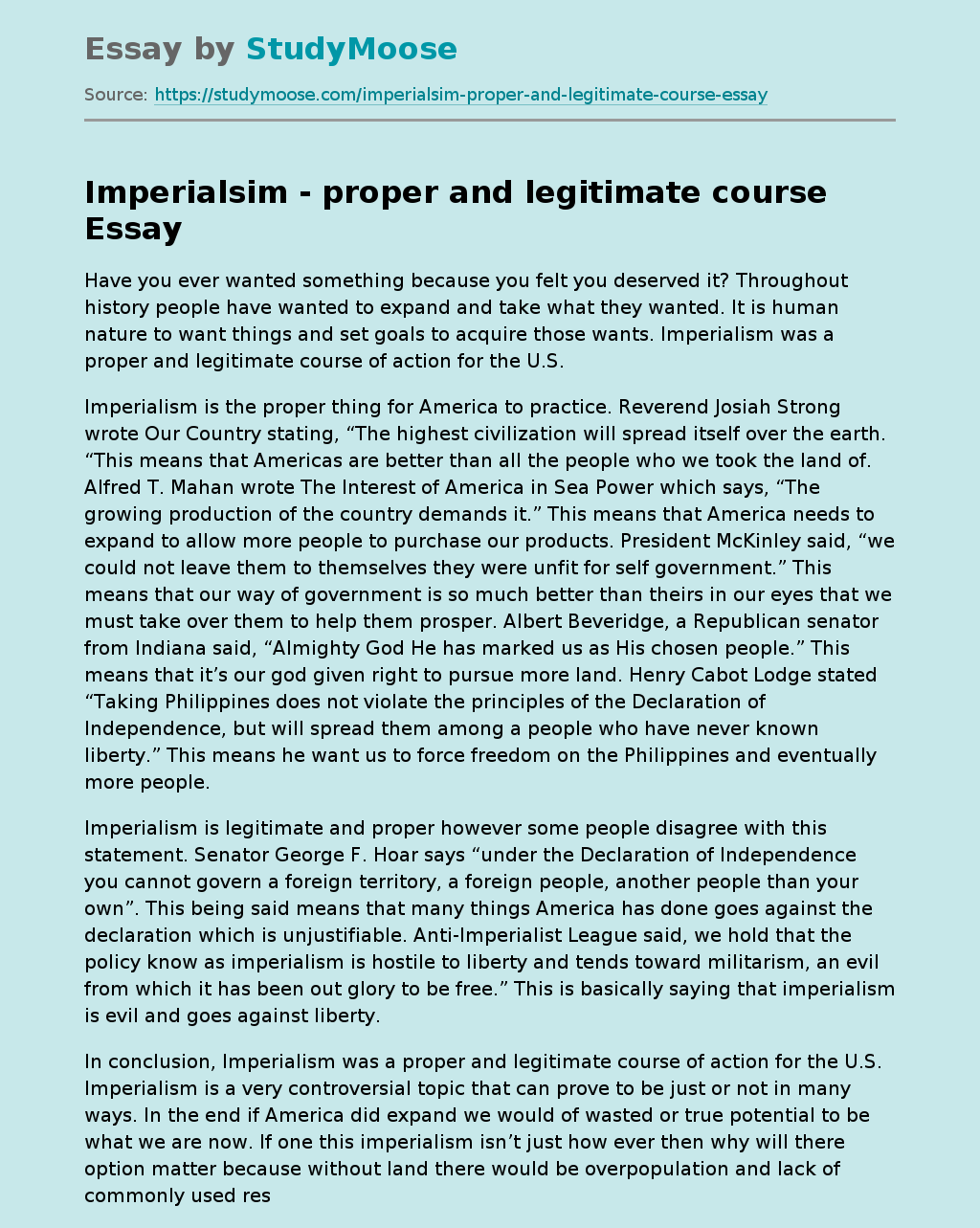