In demography migration is defined as mechanical movement of population between two different territories, therefore, external immigration could be specified as moving from one’s own country to another. Intense global migration did not used to be very common; however, these days it has become an unquestionably frequent phenomenon. As many issues are attached, there are numerous both disadvantages and advantages of this reality. To begin with, there is a variety of reasons which motivates people to leave their native country.

Don't use plagiarized sources.
Get Your Custom Essay on ﻿Immigration – advantages and disadvantages Just from $13,9/Page

The most common is a desire for a better financial position. Furthermore, different factors might be, for instance, natural disasters, education or political issues. Since there are many immigrants who cross the country’s borders illegally, the major complication is undoubtedly their legality.

In many cases, these individuals who do not have proper documentation then fail to pay taxes, health and social insurance; in consequence, the country’s economy is being harmed. To be more precise, the country’s finances are mainly gained from taxes.

As one might expect, people who avoid paying taxes cause a gap in the state’s budget. The economy then may suffer from a lack of resources; and as a result, the country is unable to provide welfare and services. Also securing individuals who do not actively work, in other words, do not make money, such as the elderly people, might become difficult. Another disadvantage may be assimilation problems which appear often in cases of differences in religion. Furthermore, if the migrants do not speak the host country’s native language, it is very difficult to adjust.

Therefore, in the beginnings, their life standard might be quite low not just economically but also, for instance, socially. Moreover, the opposite can also happen. Once the immigrants successfully assimilate with the natives, as a result, they or their children, as the second generation, may start to lose their cultural identity. As the population grows, there are fewer places to live in and fewer resources, which are being used more. This leads to a tremendous increase of the level of pollution, not only in atmosphere but also water. In other words, overpopulation might cause destruction of the environment. Migration is a process which is connected to several disadvantages. However, there may also be found many advantages. Immigrants bring cheap labour force and also often fill in the gaps at the labour market. 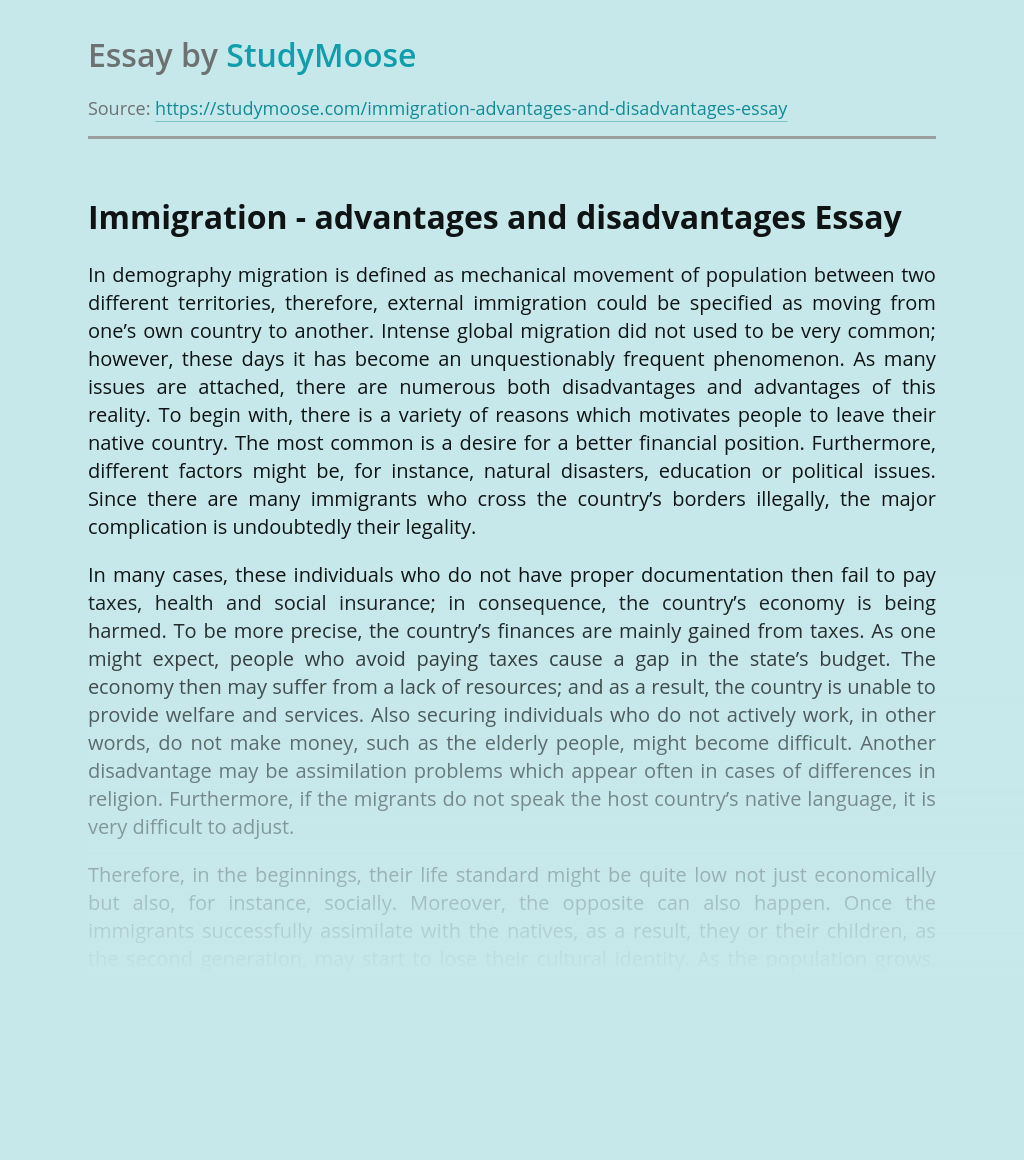 This pie chart shows us the percentage of immigration from Russia between 2003-2008. From different sources of information there are five different countries which contain a large number of immigrants from Russia. Nowadays we can easily change our place for living. Somebody is searching for a highly paid job, another wants to have a luxury...

Cultural Identity in The Namesake

The Namesake illustrates several elements of transition that are common to the stories of immigrant families and their children. As shown in the film, the first generation connects with their cultural identity and roots to a far greater degree and density than their children do. The second generation exists between two realities of culture including...

Get Essay
Italian Immigration to Australia

Pasta and pizza the two words are brought to mind when you think of Italy. The last thing that you think of is immigration. We see and hear about it nearly every day but it is usually Africa or Singapore. This essay will talk about the Immigration from Italy, Why they immigrated, how they got...

Author David Cole explains in “Five Myths about Immigration” that people are misinformed about immigrants in America and blame them for all the problems in the American society. Cole comments that the “Native Americans”, which have nothing to do with what we call Native Americans today, were labeled as “Know-Nothings” because they simply did not...

Immigration has its advantages and dis-advantages. Many people hold different views in regards to whether immigration is beneficial or not; these views will be expressed in this piece of writing. Immigration is somewhat beneficial to a country as immigrants can boost a countries economy. For example skilled and successful immigrants that reside in the UK...