Tennessee Williams uses the constant battle between illusion and reality as a theme throughout his play A Streetcar Named Desire. Many use illusion to escape the reality they are living in. This theme is present in all of his characters in different ways. Each character is shown to live their life in either the way of illusion or reality. Harold Mitchell, also known as Mitch buys into Blanches illusions. He is overtaken by her charm, but in the end finally faces reality.

Don't use plagiarized sources.
Get Your Custom Essay on Illusion vs. Reality A Streetcar Named Desire Just from $13,9/Page

Stella who is Blanches sister is always wishing for everything to be perfect with her and Stanley even though he abuses her.

She overlooks Stanley’s downfalls to escape her reality. Blanche is the center of all illusion. She fishes for complements and believes she is a step up from all people. Lying to herself and to others allows her to make it seem as if her life appears as it should be rather than how it is. To Blanche the loss of Bell Reve was as dramatic as if she lost her castle.

Because of this she pretends that her life in Laurel didn’t occur. She cannot stand the light because she is living in fear that people will notice that she is older and is in denial about it. Each of these characters show how powerful illusion can be.

Williams includes specific situations where illusion is portrayed. Such as, in Blanche and Mitch’s relationship. Blanche wants Mitch to want her and creates illusion of what she should be. From this she wants to seem more appealing and lies about her age to him and hides in the darkness she he will not see her clearly. Blanche owns a costume trunk filled with things that are dear to her. Meanwhile, they have no true value. She wears the crown she owns with the costume jewelry and goes through moments where she can pretend she lives the life of a princess to escape reality.

Shep Huntleigh is a rich character who works in the oil business whom we never truly find out exists. To Blanche he is a man who she made an escape plan for him to take her and Stella away to Miami. Stella doesn’t want to leave because she thinks Stanley her husband is true to her. In all of these instances illusion plays a key role in a way for the characters to do away with the lives they do not want to be living. Although, not all characters are living in illusion Tennessee Williams does include some who face reality. Stanley Kowalski, Stella’s husband, is strictly a reality based character.

He is constantly looking into Blanches real past. He sees through all of her illusions and wants the truth to things. This is proved in the rape scene when Stanley turns Blanche into the victim as she had made herself out to be throughout the play. Eunice the character who lives in the upstairs of the house with the Kowalski’s. She knows how untrue Stanley is to Stella and is always telling her to face reality and not put up with how she is treated like garbage from him. Towards the end of the play Mitch finally overlooks Blanches illusions and begins to question her by telling her how he has never seen her in the light and asks her age.

Mitch’s sick mother helps to keep him focused in the real things in his life by having him put aside all other things to take care of the one who cared for him. Escaping your reality and living in an illusion world will leave you blind to the things around you. In some cases, if you are strong enough to withhold from the illusions around you, you may end up in the reality, like Mitch. Both Stella and Blanche found it best in their minds to live in a fantasy but if you live in it too long it can take over your reality. 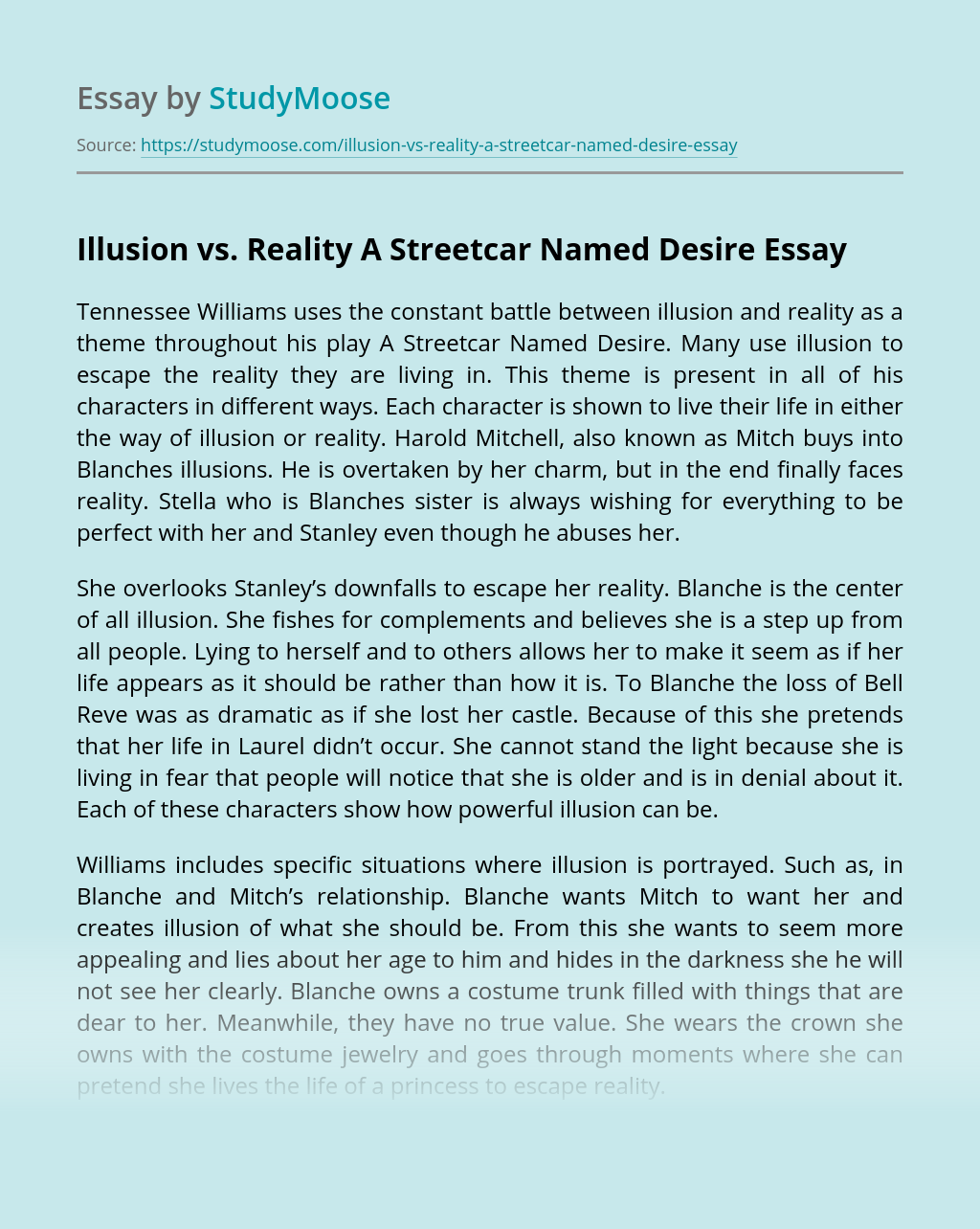 Science is a boon or bane

As we know that every coin has two faces, same with science. Good morning to everyone today I Anoohya is here to tell you about the given topic science is a boon or bane. Science” every person has his own thought about it some say it is good while the others say it is bad... VIEW ESSAY

Everyone knows of William Shakespeare, the author of thirty-seven full length plays and 154 sonnets. Romeo and Juliet is one of the most popular stories as it is read in most high school English classes. There is not a theatre goer anywhere who has not heard of, or seen, Hamlet. Anyone involved in the theatre,... VIEW ESSAY

When a dark element is revealed in the teeth, this cannot simply touch, but frighten. The factor of this kind of interaction will not only be the aesthetic field of difficulty, but also the anxiety due to the state of well-being in full. In addition, you do not miss, decide, that a dark speck or... VIEW ESSAY

The last paragraph of this essay is my preferred by far, “… in their lovely voices out of my youth. Raymond.” The author of this story made it so concrete the dislike Raymond Jr. had for his birth name that it felt like a true discovery when the character lastly accepted it. To hear his... VIEW ESSAY

INTRODUCTION: every discipline as a root thus Metaphysics is not an exempt, it has a long history, it began in the ancient time and span through the history of philosophy as a matter of fact metaphysics is the oldest branch of philosophy according to Ayo Fadaunsi he says in reviewing the thoughts of earlier thinkers-... VIEW ESSAY