Identity Crisis Amongst the Youth

What is an Identity Crisis?

According to Erikson, an identity crisis is a time of intensive analysis and exploration of different ways of looking at oneself. Identity basically refers to how a person answers the question “Who am I?” S. Sharma and M. Sharma said “Identity is an umbrella term used throughout the social sciences to describe an individual’s comprehension of him or herself as a discrete, separate entity. The development of clear and positive identity or identities involves building self-esteem, facilitating the exploration of and commitment to self-definition, reducing self-discrepancies, and fostering role formation and achievement.

Don't use plagiarized sources. Get your custom essay on
“ Identity Crisis Amongst the Youth ”
Get custom paper
NEW! smart matching with writer

In Erikson’s stages of psychosocial development, the emergence of an identity crisis occurs during the teenage years in which people struggle between feelings of identity versus role confusion.

Researcher James Marcia (1966, 1976, 1980) has expanded upon Erikson’s initial theory. According to Marcia and his colleagues, the balance between identity and confusion lies in making a commitment to an identity. Marcia also developed an interview method to measure identity as well as four different identity statuses.

This method looks at three different areas of functioning: occupational role, beliefs and values, and sexuality.

An example of an identity crisis emerging from this status is an adolescent who becomes a recluse after his identity as a star athlete is destroyed by a serious injury.

Identity moratorium is the status that Marcia theorizes lasts the longest in individuals, is the most volatile, and can be best described as “the active exploration of alternatives”. Individuals experiencing identity moratorium can be very open-minded and thoughtful but also in crisis over their identity.

Erik Erikson, the psychologist who coined the term “identity crisis” believes that the identity crisis is the most important conflict human beings encounter when they go through eight developmental stages in life which are infancy, early childhood, childhood, puberty, adolescence, early adulthood, middle adulthood, and late adulthood.

Trust versus mistrust: This stage is all about fulfilling needs.  The baby needs to trust the world around them to take of their needs.  If they are hungry, they need to develop trust that they will be fed.  If they are not fed, or their diaper is left dirty, they may develop mistrust in the outside world.  This sense of trust of mistrust can affect us throughout the rest of our lives.

Autonomy versus same and doubt: Autonomy means being your own boss.  Here a toddler tries to control their own bodies by toilet training and their environment, by always saying “NO!”.  Sometimes they do poopy in their pants or get yelled at by their parents, causing shame and doubt in their own abilities.  If we learn how to control ourselves in reasonable ways, we develop a healthy will.  We are then able to face the later challenges of life.

Initiative versus guilt: Here the keyword in a child’s life changes from “No!” to why?”.  In this stage, children want to understand the world and they ask too many freak in questions!!!!  If their initiative in questioning the world is encouraged, then they will feel comfortable with expressing their curiosity throughout the rest of their life.  If we smack them around and tell them to shut up, then they will feel guilty about their questioning and avoid being inquisitive later.

Industry versus inferiority: This is where most children begin formal education (what we call the school).  For the first time children are being formally evaluated.  If they raise their hand in class and answer a question correctly. then they will feel industrious (competent).  If he tries to answer a question but stutters to get out the wrong answer and Matt Dunn, Nick Adams, and Josh Bieber all start making fun of his speech impediment, then he will feel inferior (it still hurts even today).

Identity versus role confusion: In adolescence, Erikson believed that teenagers main social needs are to discover his or her social identity.  While searching for your identity, you may try out different roles, like trying to fit into various social groups, experimenting with drugs or sex, or just changing your wardrobe.  You should be trying to find a stable sense of self now, or Erikson believed you may have an identity crisis later.

Identity versus role confusion: In adolescence, Erikson believed that teenagers main social needs are to discover his or her social identity.  While searching for your identity, you may try out different roles, like trying to fit into various social groups, experimenting with drugs or sex, or just changing your wardrobe.  You should be trying to find a stable sense of self now, or Erikson believed you may have an identity crisis later.

Intimacy versus isolation: Young adults (early 20s into early 30s) are trying to balance their career efforts (work, school or self-improvement) with the need to be in an intimate relationship with another person.  How much time should I spend looking for a relationship?  What is I don’t find anybody?  What if I am all alone for the rest of my life?

Generativity versus stagnation: Erikson believed that by the time we reach our mid-30s to mid-50s we start to really examine our lives and see if it is going the way you planned it or did it take a drastic turn.  For example, when I was your age, I thought by the time I was 33 (yes- I am 33) I would be traveling around South America with a whip, discovering lost treasuring, and meeting new exotic women from the village to village.  Instead, I live in Rye and teach Social Studies in Harrison, with 3 kids and a big mortgage (I don’t even own a whip).  This is where some people take drastic steps and change their lives.  You will see a lot of late divorces or extreme changes in clothes or cars- we call this experience a midlife crisis.

Integrity versus despair: Towards the end of our lives we look back and evaluate ourselves.  Did we live a good life?  Leave behind a legacy of friends or family?  Or did we waste our time playing Madden 2023 on PlayStation 7?  If we feel like there were many lost opportunities along the way, we may fall into despair.  I like to use this stage to try to shape my life now- you should too.

Levels and Domains of Identity

Identity can be assessed on both a personal level and a social level. Global identity is conceived to be made up of identity in different domains such as physical appearance, athletic competence, scholastic competence, social acceptance, behavioral conduct, and global self-worth. Different scales, including culture-specific ones, have been developed to measure specific and global identity.

According to Meeus (1996)identity development can end up in one of four possible identity statuses: diffusion, foreclosure, moratorium, and identity achievement. Each of these statuses can also be examined in connection with other psychosocial outcome correlates, such as psychological well-being, quality of life, identity congruity or discrepancies, strategies and skills in problem-solving and coping, and self-regulation abilities. Quantitative and qualitative methods (like the Identity Status interview) have been devised to assess such statuses.

In line with the two-dimensional model of identity formation, the Utrecht-Groningen Identity Development Scale (U-GIDS) includes two subscales to assess the two identity dimensions: commitment and in-depth exploration. With emerging evidence of a three-dimensional model of identity, a new exploration scale, reconsideration, was added to form the Utrecht-Management of Identity Commitments Scale (U-MICS)

Based on the Identity Style Model, Berzonsky developed and fine-tuned the Identity Style Inventory, Revised (ISI3), which used 5-point Likert-type items to measure the informational, normative, and diffuse styles. The scales include 11, 9, and 10 items, respectively, and their internal consistency was around .

Active attempts were made to capture the dynamic evolutions in identity formation, development, and possible shifts between different identity statuses. Klimstra et al. (1991). conducted a five-wave longitudinal study of 923 early-to-middle adolescents and 390 middle-to-late adolescents that provides a comprehensive understanding of change and stability in identity formation in adolescence. Three types of change and stability (mean-level change, rank-order stability, and profile stability) were assessed according to the three-dimension model of identity (commitment, in-depth exploration, and reconsideration). The study is robust in its large sample size, elaborate research design, psychometric specificity the strength of the measures used, and its sharpness in addressing theoretical postulations. The study has opened up new frontiers in identity assessment and research. It has revealed that there are changes in identity dimensions towards maturity and there is a progressive change in the way that adolescents deal with commitments.

Identity Crisis Amongst the Youth. (2020, Sep 17). Retrieved from http://studymoose.com/identity-crisis-amongst-the-youth-essay 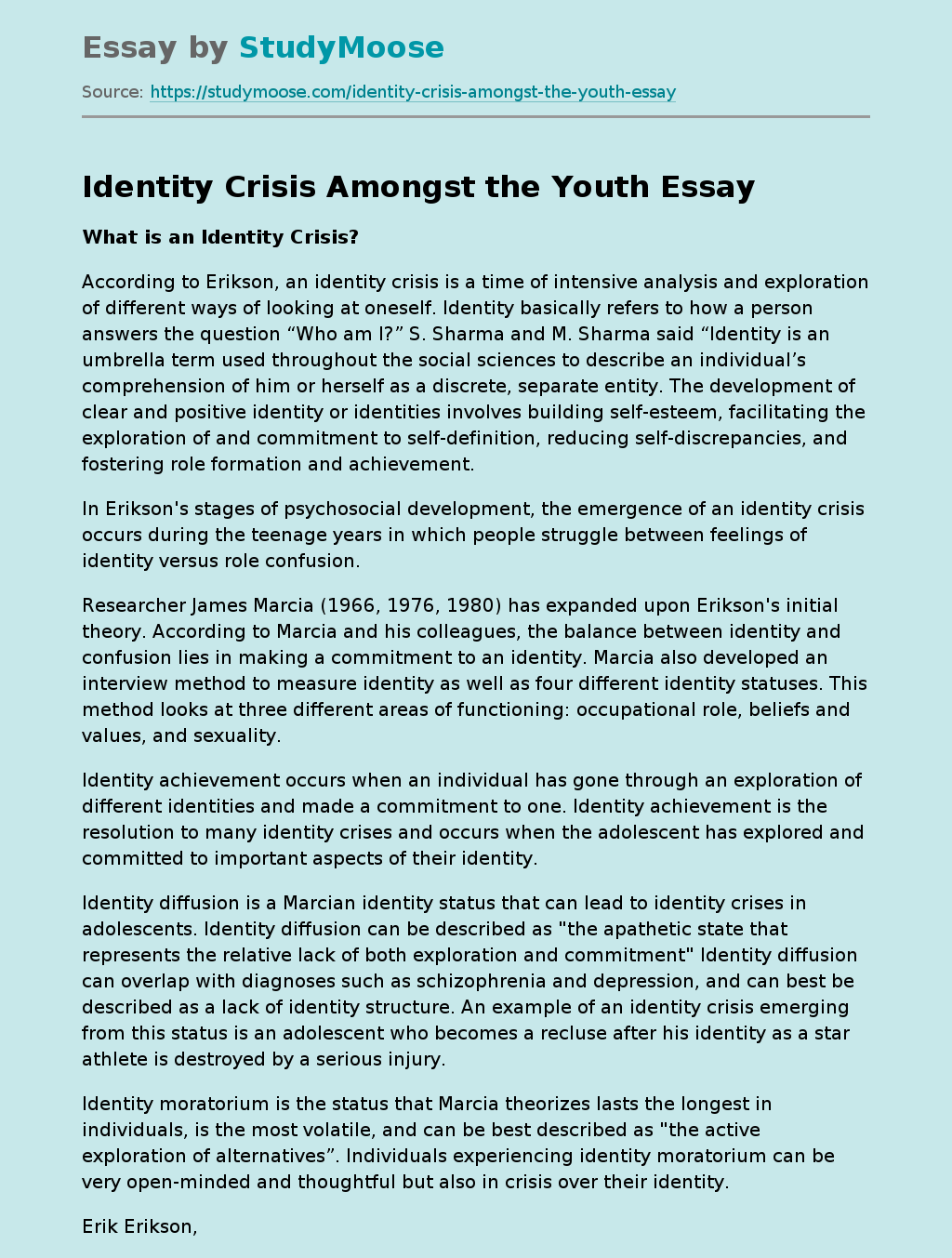