Cultural identity is the identity or feeling of belonging to a group. It is part of a person’s self-conception and self-perception and is related to nationality, ethnicity, religion, social class, generation, locality or any kind of social group that has its own distinct culture. In this way, cultural identity is both characteristic of the individual but also of the culturally identical group of members sharing the same cultural identity.[1]

At the present era of Globalization, immigration has been more and more common.

Don't use plagiarized sources. Get your custom essay on
“ Analysis of Cultural Identity Crisis of Immigrants ”
Get custom paper
NEW! smart matching with writer

For instance, America, a country of immigrants, also known as the smelter of different races, now is homeland to dozens of races or more. However, it also brings many problems inevitably, one of which is the Cultural Identity Crisis. And it is very important to solve this problem for countries of immigrants. To deal with it, those who have this kind of issue should learn to be bicultural, having a combination of having a strong ethnic and national identity, yields the best adaptation in the new country of residence.

Immigrants should try to obtain competence within two cultures without losing one’s sense of identity or having to identity with one culture over the other. Steven Yeun, a Korean-American actor who’s widely known for his role as Glenn on the popular TV series The Walking Dead, was caught in a bad situation not long ago, for giving a like to a photo of one his friends on Instagram. In that photo, his friend makes a pose wearing a T-shirt with a picture of Kyokujitsu, which can be literally translated into The Rising Sun flag.

In most parts of eastern Asia, it’s seen as a symbol associated with Japanese imperialism for it’s widely use by Japan’s military forces when they invaded other Asian countries like China and Korea during World War II. It’s like the symbol of Nazi in western countries. Consequently, Steven’s behavior drew great attention and intense denunciation from Korean netizens. Even his later apology cannot fully appease their fury. The root cause for the incidence is Steven’s lack of knowledge about his Korean culture background. He moved to America with his parents from south Korea when he’s very young. He can’t even speak Korean well until he started to learn it for his career in south Korea. In an interview of his, he also expressed his identity crisis with one culture over the other.[2]

Biculturalism can allow for a healthy adaptation to life and school. The importance of ethnic and national identity in the educational adaptation of immigrants indicates that a bicultural orientation is advantageous for school performance.[3] Educators can assume their positions of power in beneficially impactful ways for immigrant students, by providing them with access to their native cultural support groups, classes, after–school activities, and clubs in order to help them feel more connected to both native and national cultures.[4]

One cannot change it’s race. Therefore, to handle the problem, immigrants should envisage themselves and try to be bicultural instead of letting one culture over the other. By doing this, not only can they deal with the cultural identity crisis, but also they can have the advantage of understanding two different cultures, which may make them perform better in their daily lives. 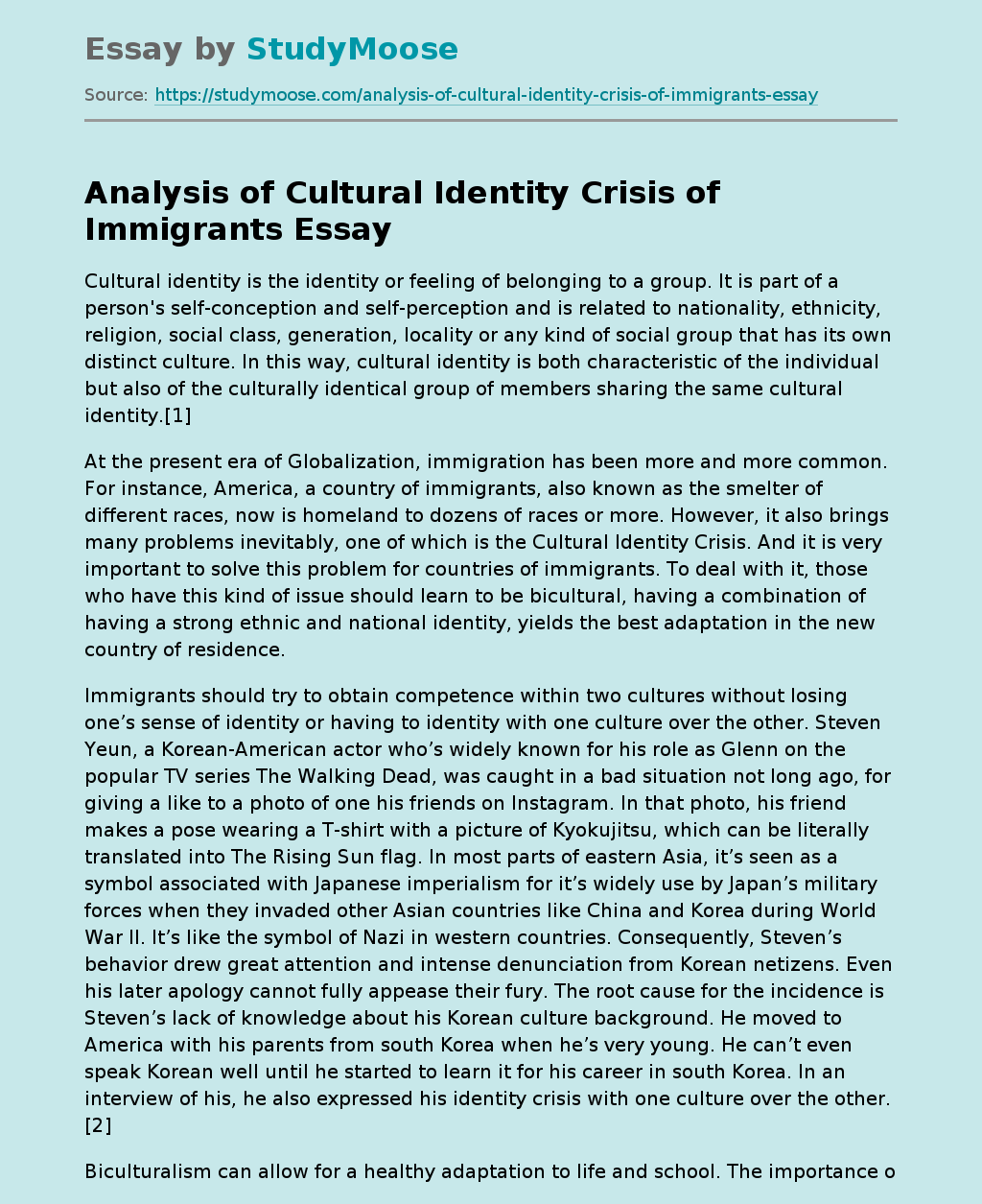