Iago’s personality is a constant alteration between his outward appearance, his “nice side” and his inner self, his “dark side. ” In Shakespeare’s Othello, as in any other story, the main character affects the story and what events unfold as a result of their actions. Who is the main character? Perhaps surprisingly, it is not necessarily Othello, the title character, but rather Iago, the true manipulator of evil. Part of Iago’s genius is how he appears to the citizens (and elite) of Venice and most importantly, to Othello himself.

Don't use plagiarized sources. Get your custom essay on
“ Iago’s Fraudulent Honesty: A Man Who Loves Hate And Hates Love ”
Get custom paper
NEW! smart matching with writer

His outward appearance is calm, persuasive, making him a very likable character. Iago’s first such appearance is with Roderigo. To the nai??ve young man Iago is intelligent, smart and reliable. Iago takes full advantage of Roderigo’s lust for Desdemona, promising him sure elopement with Othello’s wife if Roderigo assists him. Also, early in the play, Iago manipulates Barbantio into assisting him. There are other examples of how the others trust him.

Cassio trusts Iago to take over for him when Cassio goes to join the party in Othello’s honor.

Even to minor characters like Lodovico, Iago’s opinions are respected; like when he advises Lodovico to watch Othello and see for himself what has happened. But perhaps it is most important to see how Othello himself perceives Iago. Already very early in the play, it is seen how Iago makes himself seem very loyal to Othello. He warns his general about Barbantio’s anger over Desdemona’s alleged kidnapping.

Most significant is the fact the Othello trusts Iago more than any other character. However, he is the most dishonest character in the play. These two major extremes make for a very dramatic plot.

Othello takes everything his “trusting friend” says as fact without even reconsidering. Many times Othello calls Iago and honest man. Iago pledges his loyalty to Othello when Othello plans to kill Desdemona and Cassio. “Witness that here Iago doth give up/ the execution of his wit, hands, heart/ to wronged Othello’s service” [III. iii. 528-530]. If it weren’t for his soliloquies, one would perhaps never even know Iago’s “dark side” as he is such a talented fake. Iago’s other side, his evil side is what makes him the villain and what leads Othello to eventually do what is completely unnecessary.

Iago himself is aware of his inner evil. He knows that he uses his talent to hurt people. “I am not what I am he says. [I. i. 71}. He later pledges allegiance to the devil, saying, “Hell and night/ must bring this monstrous birth to the world’s light” [I. iii. 446]. He even goes so far as to compare himself to the devil when he says, “When in devils will the blackest sins put on/ they do suggest at first heavenly show/ as I do now” [II. iii. 371]. This self-awareness of his makes him even more unbelievably evil because he accepts what he does as all right.

Iago’s evil stems from the hatred of many but essentially two individuals: Cassio and Othello. Already in Act I, Iago reveals his jealousy towards Cassio because he received the lieutenancy. There is however a deeper reason for his hate of Cassio. He is jealous because everything has been going so well for him and that he has such a positive attitude. Being truly evil, Iago despises what is good and wishes to pass his evil onto others. He makes this most clear talking to Roderigo after they plan Cassio’s murder. “He hath a daily beauty in his life/ that makes me ugly” [V. . 20]. Besides Cassio, Iago’s true hatred is for Othello. There are several reasons why Iago hates the man who trusts him so much. The obvious reason is that he ignored Iago in his choice for lieutenant. But there are other, subtler and even more serious reasons. A major one is Othello’s race. He makes vivid descriptions of a black ram (Othello) and a yew (Desdemona) mating. He also envies Othello’s great achievements, including Desdemona. Since Desdemona is very beautiful and very tempting, she is the aspiration of many men, including Iago.

Even though he may not reveal it, it is very possible he wants Desdemona and jealous because Othello has her. One factor that is difficult to notice but very apparent when viewed in a general is Othello’s personality. Othello (before his turn to evil) is a man that it was a pleasure to be with; a charismatic, trusting individual who earns the respect of anyone who knows him. Iago sees this and is envious of this open and trusting nature and even though he too is trusted, he still wants to spread his evil to Othello. Iago’s inner evil is a major factor in what makes him such a villain but there is yet another element to his evil.

Iago has excellent skills of persuasion and influence. He is able to manipulate anyone and do so while still preserving the trusting feeling he conveys to others. Most obvious, at least towards the beginning of the story is his use of Roderigo for his money. Roderigo wants Desdemona for himself and sees his only hope in achieving this goal in Iago, who promises him nothing but the best. Iago is very talented in scheming his evil plans on the spot, impromptu and making them work out so well. For example, Iago is able to take advantage of his possession of the handkerchief.

He immediately thinks up a way to use it against Othello and is quite successful indeed. He is able to get Cassio and Desdemona alone together and bring Othello in to see the two of them talking. All of this he does with such grace, skill and frighteningly cold-hearted determination. For readers, perhaps the moment when they feel the most hate towards Iago is during the sudden stabbings when Iago decides to finish off Roderigo, who had been his loyal sidekick. To eliminate any chance of suspicion placed on him he victimizes Bianca, accusing her of having involvement in the slaughtering.

Iago however is certainly not stupid. He is an intelligent and talented man who has been driven mad by an uncontrollable monster inside of him, a monster he himself recognizes as having green eyes; the monster of jealousy. After the stabbings, he knows that his entire plan and his whole life hinges on the events that follow. “This is the night/ that either makes me or fordoes me quite” [V. i. 150]. Iago’s talent and genius is an unfortunate waste of talent. Even though Othello is thought of as the tragic figure in the play that bears his name, the point is arguable.

Iago is also a tragedy, one of potential; a man who has so much to give to the world but no filter of goodness through which to pass that offering through. His heart and mind have been conquered by jealousy and hate and all of his skill with people; his powers of improvisation and persuasion, have gone to the cause to hurt others and to cause one man, the man who trusted him most, ruin. Iago’s aspects; his misleading outward appearance, his inner evil and his skill as a schemer are all what make him such a perfect villain.

His two polar personalities are what make him so evil and so disliked. His role in the play is essential. Without Iago, there would be no reason for Othello to eventually kill his wife and no reason for Othello’s life not to be ideal, as it is so often portrayed today. These days, there needs to be a reminder that life is not perfect and that everything will not always go as planned. Shakespeare makes sure that not everything goes perfectly for Iago, serving as a reminder of the harsh realities in our lives. 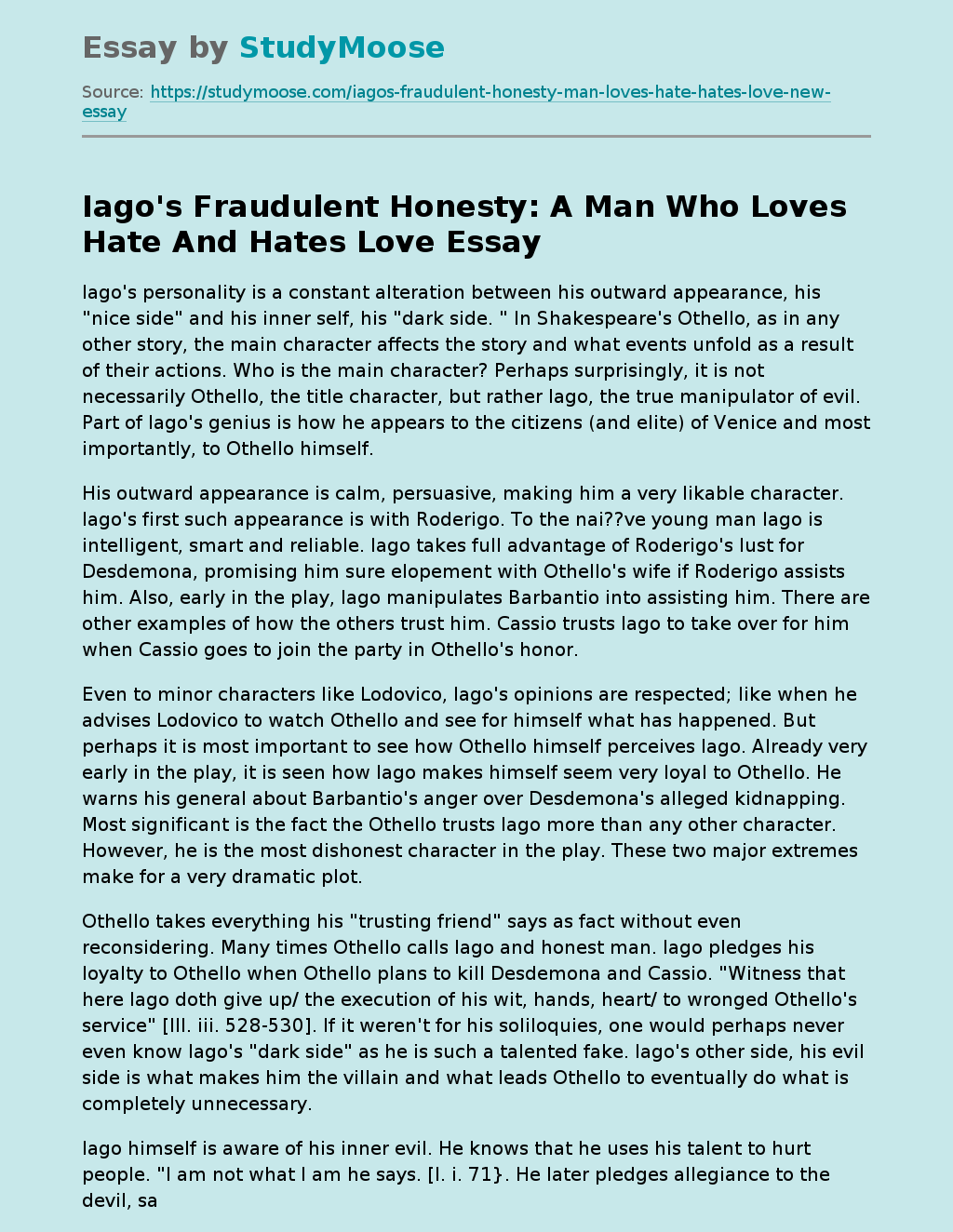