Polonius’ statement, found in Act Two, Scene Two, reflects the symmetry and order of the society he lives in. He inhabits a world of certainty and medieval convention. The play can be seen to challenge the statement, both in the action and in the characters, particularly in the character of Hamlet himself. It is Hamlet, the ‘renaissance’ man of the play, whose controversial attitude is constantly seen to challenge the medieval certainties that could still be seen in Jacobean society. Value was placed on duty to the monarch and to God; the institution of marriage was sacred and scientific reasoning was absolute and definite.

Don't use plagiarized sources. Get your custom essay on
“ I hold my duty as i hold my soul both to my God ”
Get custom paper
NEW! smart matching with writer

All these things are challenged in Shakespeare’s Hamlet. The social and cultural climate of Jacobean society was such that certainties and conventions were held in high esteem- Shakespeare’s Hamlet is written in the context of, for example, the social hierarchy of the time, the medieval court, and religion. All of these are challenged in the play by both the characters and the plot.

Even the very form of the statement challenges these certainties, for the couplet is a chiasmus- the symmetrical structure reflects the very nature of the society in which Polonius lives.

In Shakespeare’s time society was beginning to ask some of the questions which Shakespeare addresses through the character of Hamlet. Most people embraced a rational, scientific line of thinking – Elizabethans were not always heavily superstitious. For example, in Act one, Scene one, Horatio expresses doubt at the existence of the ghost: ‘Before my God, I might not this believe Without the sensible and true avouch Of mine own eyes.

‘ They also began to question the old hierarchy and the natural order of things- such as God and ‘gracious king’ upon the dawn of the Renaissance.

The idea of society as a fixed structure and everything being ordained in the world was indeed a strong certainty. Hamlet has a clear vision of things as they are – he is a realist, a Renaissance man, unlike characters such as Claudius and Polonius who Shakespeare portrays to be lacking in vision. Shakespeare shows the court to be full of people who think that all these things are absolute simply because they have always been a certain way. Hamlet is also the main vehicle through which Shakespeare conveys his views.

Hamlet has indeed been brought up with medieval and religious certainties too. ‘Or that the everlasting had not fix’d His canon ‘gainst self- slaughter. ‘ A modern audience may very well see Hamlet as being rather tame- a twenty-first century rebel would not acknowledge proprieties such as the divine ban on suicide- but Hamlet seeks more than revenge. He is a melancholy individual, who searches for the answers to some of these questions; through the title statement, Shakespeare challenges his contemporary audience and the modern audience to question these certainties too.

Hamlet’s clear vision is in direct contrast to the other characters, in the sense that he is the only character who is prepared to question these certainties and to try and define, in a sense, what the true meaning of life is, what it is all about. Shakespeare challenges the statement of duty to God and king by implying, through the character of Hamlet that life is underpinned by something other than the monarch and the church. Hamlet is totally aware of the beauty of the world yet at the same time has a pessimistic outlook on the gifts of man as we are all destined to die anyway:

‘What piece of work is a man, How noble in reason, how infinite in faculties, in form and moving how express and admirable, in action how like an angel, in apprehension how like a god: ‘and yet to me what is this quintessence of dust? ‘ The character of Polonius is underpinned by values such as duty to God and king- this is illustrated not only in Act Two Scene Two but also in Act One Scene Three: ‘This above all : to thine own self be true, As it must follow the night the day Thou canst not then be false to any man. ‘

This quotation illustrates a simplistic outlook on life. The main way in which Shakespeare challenges this outlook is, ironically, in Polonius’ death. In Act Three, scene four, Polonius is casually and ignominiously killed by Hamlet : ‘O, I am slain. ‘ Polonius expresses surprise as much as anything, while Hamlet ‘s words reinforce the irony of Polonius’ self- importance: ‘I took thee for thy better. Take thy fortune: Thou find’st to be too busy in some danger. ‘ Polonius is clearly at home in this ordered society and shows a passive acceptance of the status quo.

He has a simple medieval outlook on life and clearly values his duty to his God and king; however, he dies by ridiculous accident. Although throughout his life he has clearly endeavoured to serve these two entities to the best of his ability, he still dies an unnatural, brutal death. Shakespeare is therefore illustrating the irrelevance that these values have to life, both in Shakespeare’s era and now. The statement which Polonius makes in Act Two Scene Two about duty to God and King allows the reader to infer a lot about the character of Polonius and the world in which he lives- he does not seek new experience.

These medieval certainties are also challenged in the character of Claudius. He is obviously not on the side of God- indeed, he seems to contradict the very reasoning of the church by the brutal manner in which he murders the king. It is ironic therefore that he seems to declare himself king by divine right as he actually dies with a guilty conscience: ‘There’s such divinity doth hedge a king That treason can but peep to what it would, Acts little of his will. ‘ Here it appears that Claudius has conveniently forgotten exactly how he became king. Shakespeare is challenging the idea of kingship.

He is showing the court to be full of people who think things are the way they are because they have always been done that way, such as Polonius, Gertrude, Claudius, and Rosencrantz and Guildenstern. The character of Claudius highlights the corruption of the medieval court. The intrigue and machiavellian machinations of the court are self justifying to all these people; for example, Rosencrantz and Guildenstern deceive Hamlet and go behind his back simply because they are serving their king. In Shakespeare’s time deception and violence were commonplace if they would benefit the king.

Although Claudius seems to take the moral high-ground throughout the play he has no good intentions toward Hamlet at all. Shakespeare’s Hamlet also challenges the institution of marriage- it is shown in the conduct of Gertrude and Claudius not be a sacred union but a justification for excessive promiscuity. Hamlet is distraught by his mother’s rapid re- marriage to his uncle after his father’s death: ‘To post with such dexterity to incestuous sheets’. Shakespeare invites us then to question the notion of a stable royal marriage, and the values that society had then and the values we have now.

Hamlet is disgusted by their sexual excesses and, moreover feels he has been tainted by them: ‘O that this too too sullied flesh would melt, Thaw and resolve itself into a dew. ‘ Shakespeare is challenging the morality of the royal marriage- the fact that Gertrude marries the king’s own brother shortly after his death seems to suggest the absence of love. In Hamlet, the degree of emotion and true respect in marriage is shown to be weak- it is easily overruled by lust, as the ghost of the previous king states: ‘Let not the royal bed of Denmark be.

A couch for luxury and damned incest’. Hamlet is an unconventional revenge tragedy- Shakespeare subverts the genre. Hamlet is reluctant to take revenge whereas Laertes is hot- headed, impulsive and ready to avenge the murder of Polonius: ‘It warms the very sickness in my heart That I shall live and tell him to his teeth, ‘Thus diest thou’. Shakespeare undermines the concept further by showing that Hamlet is not in fact a coward- his ideas are slightly more subtle. He is indeed hesitant about avenging his father’s murder- he passes up an opportunity to kill Claudius in Act

Three, scene four, as he does not want to kill him in an act of redemption. This goes against the traditional idea of medieval and Jacobean revenge: ‘A villain kills my father, and for that To heaven. Why, this is hire and salary, not revenge. ‘ This is a challenge to the genre because Hamlet is prepared to bide his time in order to achieve the perfect murder- he wont be spontaneous and impulsive. This is shown by the fact that he passes up an opportunity to kill Claudius. Shakespeare’s Hamlet has a good degree of relevance to life in the twenty- first century.

Although some of the major themes, such as the court and incest, are no longer applicable to modern life, we can relate to some of the underlying themes such as love, sorrow and resentment; we can relate to the emotional distress. Reasoning in Medieval Denmark where the play is set nor indeed in Jacobean society is not so different to our reasoning today- the majority of people today may not believe in ghosts but characters in the play, such as Horatio, and some people in Jacobean society do not believe in ghosts either. In Act one, scene five, Hamlet makes this very thought- provoking comment to Horatio:

‘There are more things in heaven and earth, Horatio, Than are dreamt of in your philosophy’. We have our certainties today- in the form of scientific reasoning; but our certainties are equally open and capable of being challenged. One of the main themes in Hamlet is death- we are still uncertain about what happens after we die. The character of Hamlet himself has a romantic, post modernist way of thinking; everything is relative and there are no certainties- only thoughts: ‘Nothing is good or bad. Thinking makes it so. ‘ In a sense here Hamlet can be compared to the Romantics.

Keats wrote in the context of Shakespeare: ”Twixt damnation and impassion’d clay’. (‘On Sitting Down To Read King Lear’) This in a sense is what underpins Shakespeare’s Hamlet- the idea that whatever certainties are held in any given era will always be questionable, and open to discussion. Our certainties will always be challenged because nothing is definite, or absolute. This romantic concept is based on the idea that this is what life is about- challenging certainties in order to try and discover the ineffable truth about this world and the next. 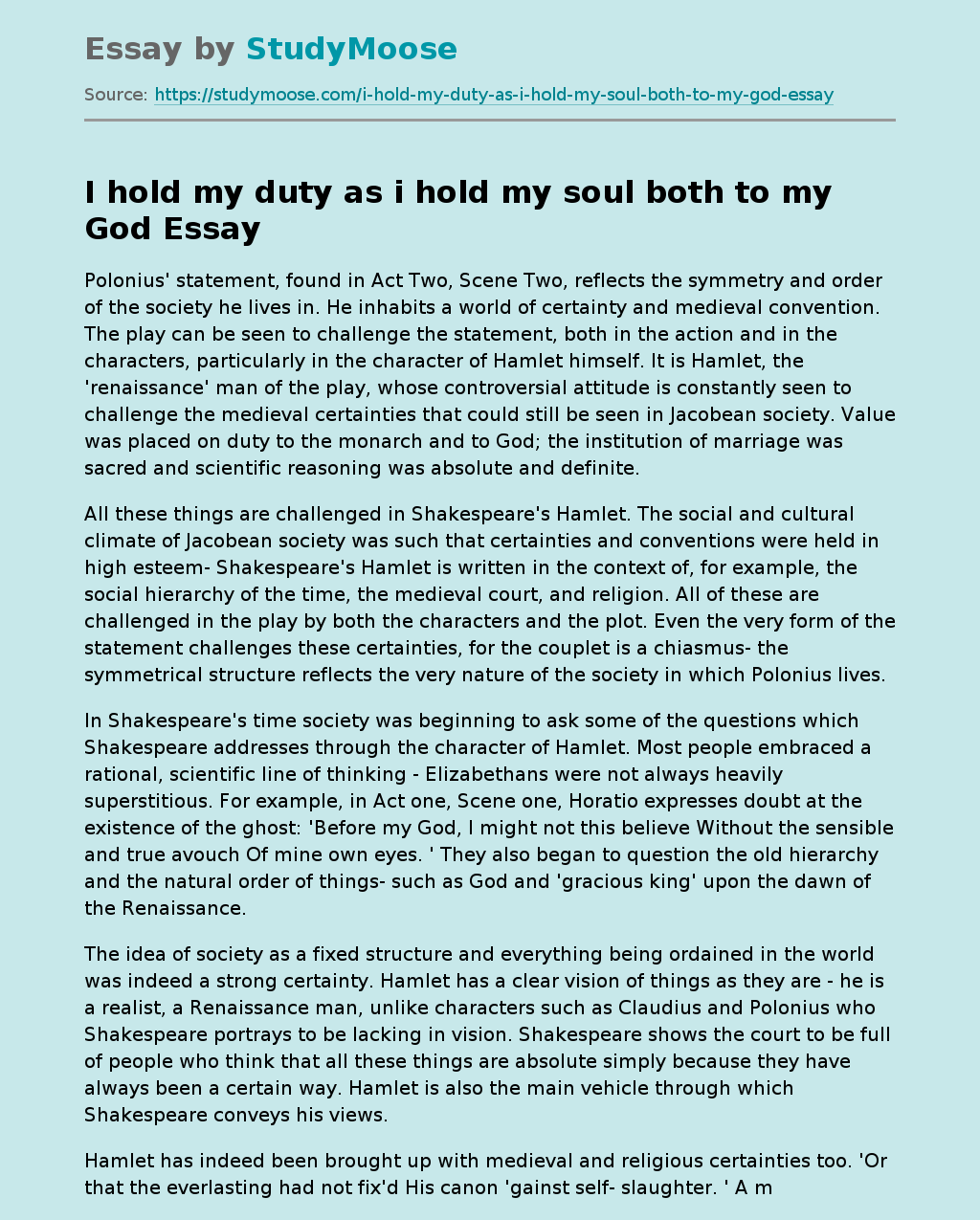