“The American Dream, Alive or on Hold,” by Brandon King

The concept of American Dream is a cliché associated with welfare, prosperity and economic stability. It is a dream about the ideal standards of life, comfort, and richness. Many people in pursue this dream moved into America having hope to build prosperous and bright future for themselves and their families. This cliché has deeply enrooted in mind of people and associates with this country.

Don't use plagiarized sources.
Get Your Custom Essay on “The American Dream, Alive or on Hold,” by Brandon King Just from $13,9/Page

Here it goes not about the hope of winning the lottery, nor the support of a market economy or state policy. It was a hope that any goals can be achieved by relying on their knowledge, trusting their intuition. This reflected the deep-rooted need for Americans to have a personal, successful experience in something. It seems like a craftsman is finally happy with what he has done, pleased with his skill, or when the merchant finally sees his ships at sea.

A dream is a success. The very process of achieving this success may be more important than success itself.

“The American dream, Alive or on Hold” by Brandon King is a critical manifest dwelling upon all the issues connected to the notion. However, the author focuses more attention on the economic side of a problem. He examines in detail current and previous situations with the economy. He understands the concept of the American dream as the availability of wages allowing people to live their life to the fullest, having an opportunity to afford things they need.

According to the point of view of the author the average wage, being above the minimum index, would not make people feel wealthier. This issue is much more global. It needs an in-depth approach, not a surface one. In times of Great Depression, the minimum salary was established to make sure they citizens could afford the things of basic human necessities. Implementation of higher wages was performed to boost the economy, and it was successful, helping to come over the period of depression. However, that measure was temporal. After some time arose the need for the new changes.

In the perception of Brandon King illustrates the notion of the American dream as a motivation to work hard to have the better life. He depicts the contrast of achieving this life of a dream. If several years ago it was considered that moving to the highest class of society is the best way to live a happy life, now the views have changed.  Now people aim to move to a middle class of society. People consider that a fundamental element, which will assist in the building of the happy future, is an ability to save enough money for the future and opportunity to get a stable and secure job.

Arises the question: “is the American dream dead according to King?” For sure, the answer is negative, while talking about it more generally. This notion was reshaped due to the changes in economy and life of the country. Nowadays, it is still achievable; however, the format is different. Being in today’s economic environment, it becomes more difficult to reach the upper-society cluster. The plans for the future under the influence of various factors have reshaped. Now people aim to save enough amount of money to build better future.

Is the American dream still alive? Undoubtedly. Nowadays it is even more active. People strive to overcome recession, inequality and build prosperous future for their families. People do not attempt to acquire a high status in the society. They aim to live in stability and peacefulness, having ability to earn enough and to work at a secure job. The economy is fragile. Arises the strong necessity to be sure in one’s future and have a prospect to develop and maintain successful life. The unemployment rates are not lowering. Economy develops slowly. Many obstacles do not allow the economic recovery, such as weak estate markets and scarcity of workplaces.

He claims that the American dream is dead, as financial gaps between people of different clusters of society are significant. The contrast is visible. The thing is that the upper classes are criticized for their well-being, while lower classes suffer from the scarcity of money. This strict contrast is the first and the most prominent sign that the American dream no longer exists. People are depressed. The poor do not believe that the hard work may secure them well-being. Lower clusters of society do not think that their children could get ahead of their parents. The situations are somewhat frustrating. People are too pessimistic about their future and impose limits on themselves. It is the root of the problem. Those, who are more optimistic about their future have better health and are more likely to succeed than those being continuously depressed. This depression results in incensement of suicides and drug and alcohol addictions. All this is caused by the lack of hope.

The biggest problem is that the money is concentrated in the hands of a minority and there is no middle-class in the society. Exists a massive gap in the nation, classes are on the opposite sides. For that reason, the economy cannot recover. There is no middle-class, which could secure a sustainable development of the country. The government thought that rising of salaries would boost the productivity of workers; however, the problem is much more complicated. To make the economic situation more stable and promote progress, complex actions should be taken.

According to the position of Brandon King, America lost its old dream, however, acquired the new one with another connotation. There still be a hope to revive the old American dream. All the government needs to do is to raise the minimum salary and create more working places. People will renew their hope for brighter future; they will be more inspired. The despair will be eliminated. The main aim of the politicians should be a creation of conditions allowing filling this gap in the society. If the middle class is more numerous, the economic growth will come. Is the economy recovers, it will be easier for people to count on a brighter future and their American dream will come true!

“The American Dream, Alive or on Hold,” by Brandon King. (2016, Apr 12). Retrieved from https://studymoose.com/the-american-dream-alive-or-on-hold-by-brandon-king-essay 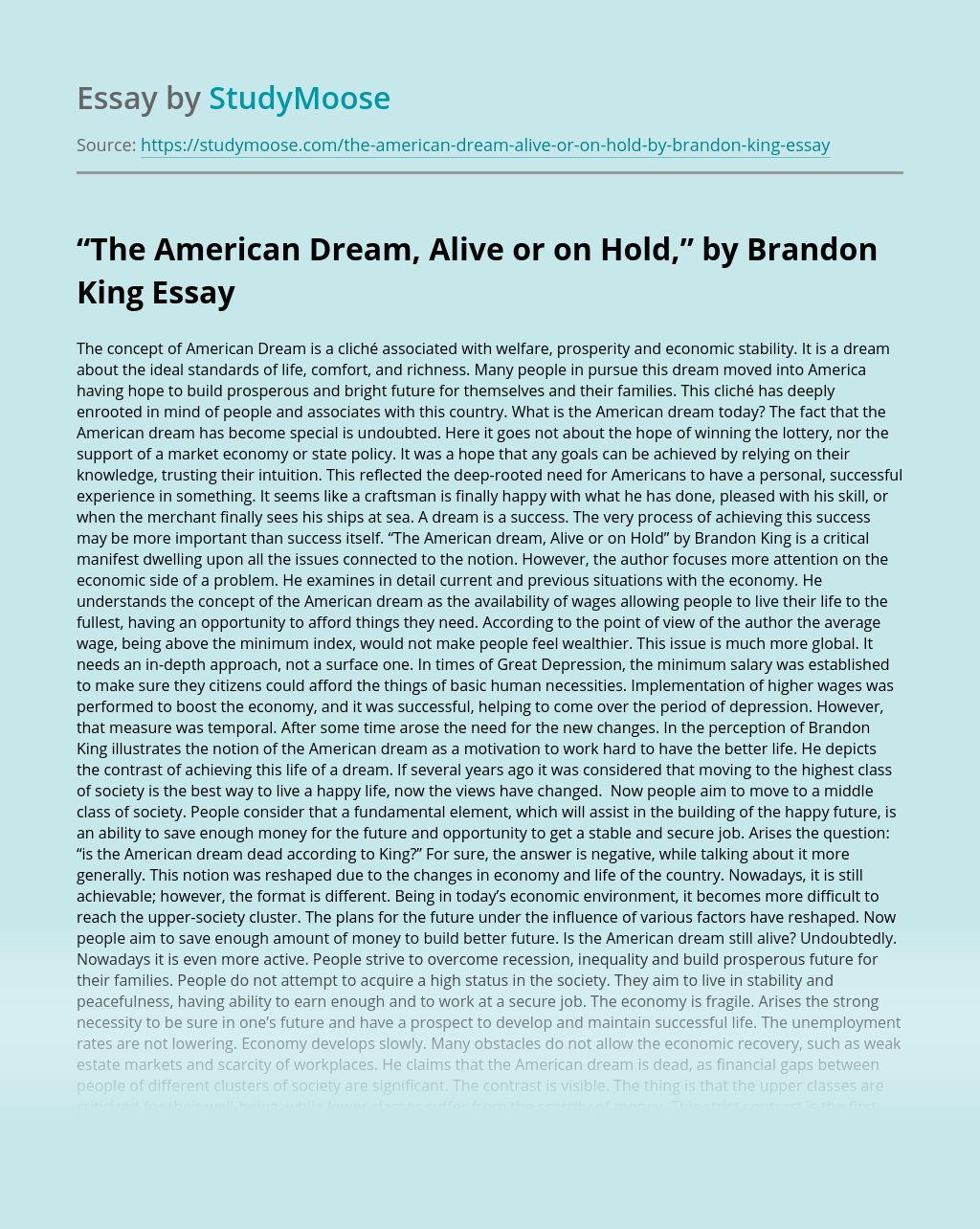 Frankenstein Mary Shelly wrote a novel which was published in 1818, but her name as the author didn’t appear until 1823. The first ‘Frankenstein’ movie was created in 1931. The movie was based on Mary Shelly’s novel, but some things were changed to make the movie more eye-catching to the viewers. Characters were added and...

The nuclear family is a term used to define a family group consisting of aheterosexual pair of adults; wife and husband, and their children. It can also be known as a ‘beanpole family’ and it can be, especially in middle-class families, child-centered; child-centered is defined as being actively involved by spending lots of time together...

“He, who opens the door of school, closes the prison.” Respected principal, guest of honor, headmistress, supervisor, teachers and students. Good morning and welcome to the 64th republic day celebrations. First, let us welcome the guard of honor our chief guest Mr……………………… We will now have a patriotic song by one the student who love...

The explorer’s daughter is about a woman who is seeing a narwhal hunt take place, and is torn between the lives of the hunter and the lives of the narwhal. She employs lots of language techniques to convey her feelings. She has written this as a descriptive piece of writing but it ends up almost...

Critical Analysis of the Artful Dodger in Dickens' Oliver Twist