Bushido the soul of Japan

The book Bushido the soul of Japan presented the various aspects of the Japanese society when there was the emergence of close interaction between the western and eastern civilizations. In this essay, an attempt is made to discuss the major themes and significance of this book. Analysis Inazo Nitobe, the author of the book, Bushido the soul of Japan, intended to provide information regarding the basis of Japanese doctrines of knighthood to the western scholars. Perhaps his interaction with the western scholars must have inspired him to write a book, which discussed regarding the main features of the Japanese feudal society.

Don't use plagiarized sources. Get your custom essay on
“ Bushido the soul of Japan ”
Get custom paper
NEW! smart matching with writer

This is not a huge book. The book, however, has ambitious motives in the sense that through this small book attempt is made by the author Nitobe to reveal the complete essence of Japanese culture to the western audience. However, it simplifies the basic features of Japanese culture to make it more comprehendible to the western audience. To achieve this objective, several examples are given from the eastern and western literature.

Consequently, this book has attracted the attention of several western scholars who wished to learn about the cultural aspects of the Japanese society.

This book attempts to explain the basic features of the Japanese culture for the western audience by the use of English language. This book has been translated into different languages such as German, Polish, Marathi, and Chinese. This fact indicates the popularity of this work among both western and eastern readers. In the following pages, we try to give the details regarding the information that we gather from this book.

The author obtained the information regarding the martial code from the elders when he was young. During those days, the author avers that there still existed few features of feudalism.

The book Bushido argues that among the variety of doctrines of the Japanese culture, the most important are the samurai ways of life. The book deals with an attempt to trace the traditional Japanese martial code, which is not preserved in a written mode; but it spread from one generation to the other through the oral means. This book tries to reveal the past and present status of this martial code, which has been safeguarded by the Japanese martial arts experts for several years. This book is very essential to comprehend the real soul of Japan.

The book traces the origin of this martial code to the Buddhist and Confucian thinkers and practitioners of this martial code. The followers of Zen Buddhism and Shintoism who have discussed regarding this code in their writings also developed it. This book comprises different chapters which provide information regarding the principles and the various aspects such as the ethical system, sources of Bushido, justice, courage, benevolence, politeness, truthfulness, honor, duty of loyalty, training of samurai, self control, institutions of suicide and redress, the soul of samurai, influence of bushido, and the future of bushido.

The Japanese were given information regarding the various moral principles at an early age. One such principle is that they should demonstrate their obedience to the elders. These moral principles were advocated to improve the character of the people, which allowed the people to make distinction between the right and the wrong. Bushido existed during the feudal age in Japan where there existed differences between the elite warrior class and the ordinary people. Bushido provided few guidelines regarding the actions of the individuals and their attitudes towards others in the society.

This moral code of Bushido gives great importance to the obligation or the duty of individuals towards other members in the society. Each individual was expected to perform his duties towards elders, superiors, and other members of the society. The young people were given instructions regarding the need to imbibe the spirit of courage and they were informed that the death caused due to courageous and right actions leads to obtaining honour in the society. An important principle of Bushido is that the people were expected to follow the principle of benevolence, which means that they were supposed to help other individuals.

In fact, this principle was the basis of the feudal Japanese society. This work gave importance to the quality of politeness and sincerity among individuals. Through these qualities, it is possible to obtain the love and friendship of other individuals. This will lead to harmonious relationship between the various members of the society. Bushido gave extreme importance to honor. It was the duty of every warrior or samurai to protect his honor and reputation. The book criticized the act of lying, which was considered as a sign of weakness. It was not considered as an honorable act.

The book also gives information regarding the life and activities of the samurais, who possessed the feudal characteristics. The main aim of the samurais was to serve their masters and to show obedience towards their lord. The training of the samurais consisted of various principles such as wisdom, benevolence, and courage. They were given training in different arts of warfare such as archery, horse riding, wrestling, sword warfare, etc. At very early age, the samurais were subjected to training in fighting. Importance was given to developing their character rather than intelligence.

Bushido encouraged the development of the personality of the warriors. They were not supposed exhibit any weaknesses or other emotions which would harm their own character and those of their lord. Hence, the samurais were expected even to commit suicide in order to safeguard their and lord’s honor and reputation. Particularly when a samurai committed errors, they were expected to kill themselves. In fact, the work refers to the ceremonies where there was the suicide of the samurais. This act surprised many western observers. This was one system, which differentiated Bushido code from other martial codes.

The Bushido code mentions that the most important companion of the warrior was the sword which can be considered as his soul and he was expected to carry the sword wherever he went as it’s use led to the happiness and misery of the warriors. Ceremonies were performed which gave the right to samurai to possess the sword. The sword was one symbol of samurai, which differentiated him from other individuals in the society. Both rights and duties were performed and enjoyed by the warrior class who lived in the feudal Japanese society. The book also gave specific information regarding the role of women in the feudal society.

Yet, at the same time, one can see that the Japanese believe that Bushido or the martial code is the basic spirit that can be found in their heart. The Japanese in the modern context possessed great passion for this martial code, in the same way, as it was the guiding force during the pre-modern times. Thus, the author argues that Bushido has maintained the basic features of the Japanese culture through this martial code. (1908) Conclusion The book gives information concerning the perception of the author regarding the ethical principles of the martial code called Bushido.

This book provided information regarding the features of the feudal society of Japan in the pre-modern times. However, the author suggests that these principles are relevant even in the modern context. The author argued that the Japanese military achievements in the modern period against its enemies like China were due to the martial codes such as Bushido. This meant that there is a need to encourage the modern generation to imbibe the principles, which would lead to the development of their personality and the personality of the Japanese society. Reference Nitobe, Inazo(1908). Bushido the Soul of Japan, 13th edition.

Bushido the soul of Japan. (2016, Jul 31). Retrieved from http://studymoose.com/bushido-the-soul-of-japan-essay 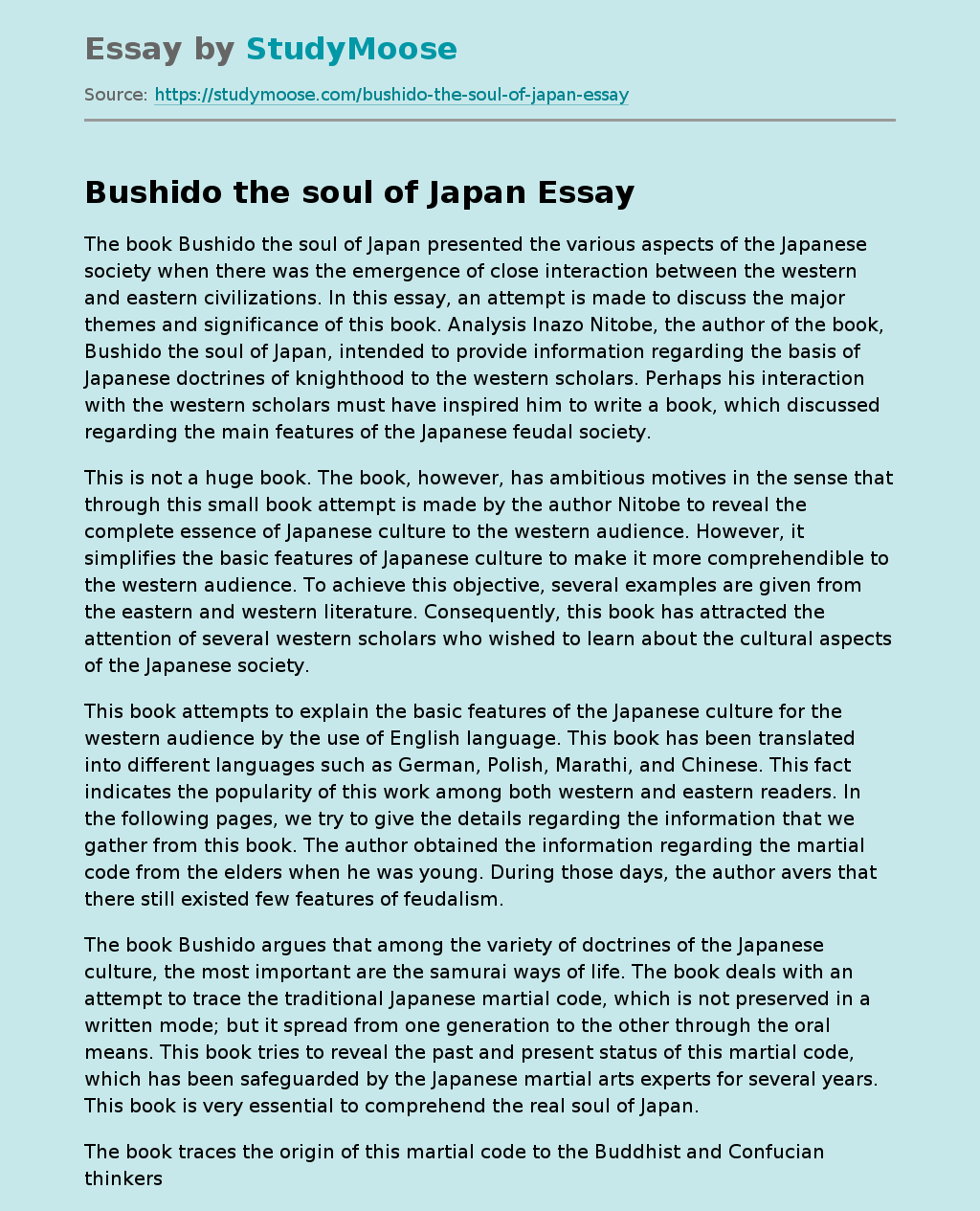