How Writing Has Changed the World: Junot Diaz and Gustavo Perez

Writers can express in words matters that affect society in a clear and concise manner. Through the use of many writing styles, they can use a fictional character that carries the author’s message from one chapter to another as a story unravels. Immigration has always been a complicated issue in the recent past, and many arguments have been raised. The trend of people moving from their countries to others in the hopes better life has been on the rise in the last decade.

Don't use plagiarized sources. Get your custom essay on
“ How Writing Has Changed the World: Junot Diaz and Gustavo Perez ”
Get custom paper
NEW! smart matching with writer

Many of them run due to war while others are in search of a better life.

In the end when the immigrants get children, together they find it hard to adapt to a culture that is foreign, and at the same time, these immigrants’ children have no other culture they know. This situation results in a case where these individuals are in search of an identity in the place they know yet they feel as if they are not accepted.

This concept is well expressed by Junot Diaz who uses a conversation of individuals going over their childhood memories to illustrate the challenges and struggles that immigrant families face after immigrating to America. The same sentiment is echoed by Gustavo Perez in his poems like “Bilingual Blues.” Immigration to America from the Caribbean and other places resulted to immigrants suffering identity crises due to a clash of different cultures and their different perspectives on identity crisis, the impact of immigration according to Gustavo and Junot Diaz.

In both works, it is clear that the authors expressed challenges in finding their identity due to a clash of cultures.

In the short story ‘Drown’ by Junot Diaz the author can illustrate the struggle in finding identity through a high school character named as Yunior who a high school student who sells drugs to support his mother. The author paints him as an individual whose life throws challenges to him more than he can handle. The illegal activities that he engages are as a way to survive and offer support to her mother as their father walk out on them.

The conditions his life has also been affected by the fact that even his friend left him to attend college and this caused Yunior to have low ambitions, ‘I had another year to go in high school, no promises elsewhere.” Though the fact out of his illegal action he can cater for her mother’s basic need, Yunior did not want her mother to know the illegal business he was engaging in as he expressed, “ I recognize like half the kids on the bus. I keep my head buried in my cap, praying that nobody recognizes me.

‘ This scenario illustrates the fear he experienced on account that his customers could approach him to buy the drug in her mother’s presence. Gustavo Perez looks at the struggle on a choice of language. In his poem the ‘Bilingual Blues,’ the author uses both English and Spanish on the same piece of writing. He uses this chance to show how living one can struggle to adapt to one culture as a result of immigration “I have mixed feelings about everything. Soy un ajiaco de contradicciones.

”In the first part of the line he uses English while the next he writes it in Spanish. Usually, individuals have the first language that they learn and use, and as they progress they learn other languages through the help of their first language. An individual born and exposed to one culture tends, to naturally follow that specific culture choice of language. Gustavo got exposure to the two cultures, and its effect is evident from his poem. Thus the two writers are successful on illustrating how immigration can affect an individual identity which is usually formed by the social interaction with the environment. In case there is a crash on two cultures, individuals who go through these environments are likely to struggle to form an identity.

Furthermore, both Gustavo and Junot Diaz illustrate diaspora creates a sense of imbalance to the immigrants. In this piece of work, Junot Diaz demonstrates how Ramon Yunior’s father immigrated to America. They came to America with big hopes that they would get a better life and life would be more comfortable compared to their Dominican Republic. He succeeded to a certain extent as he was able to own a business, but when his family joined him, it struggled to find a balance in the new environment and culture.

Despite his success, he could not find happiness or feel better in the new situation as he had hoped. The term diaspora is used to illustrate a group or community of people that have an origin from another geographical location. These immigrants move from their countries under different motives mostly search for a better life is the primary motivation. In a piece of work ‘Drown’ by Junot Diaz, the author illustrates the feeling of “lack of belonging.’ Despite immigrants moving from their area of origin and settling in another country. The sense of belonging that is closely associated with an individual area of origin cannot be replicated in another country.

This feeling that of lack of belonging is also expressed clearly by Gustavo Perez on the epigraph used by Juan Diaz in his book “Drown,” “The fact that I am writing to you in English already falsifies what I wanted to tell you. My subject: how to explain to you that I don’t belong to English though I belong nowhere else.” From this epigraph, we can see clearly that the author through the use of clever wordplay can illustrate his lack of sense of belonging. He aims at expressing the fact that he is not an American, but the small factor that he is laying his argument in English turns the whole argument into a paradox. He goes on to illustrate that though he can communicate comfortably in English he lacks the natural connection that an individual feels to a culture that they belong to.

He also summarizes his point by noting that though he lacks that sense of belonging to the country he immigrated to, he does not have a place of origin that he can reference to, “how to explain to you that I don’t belong to English though I belong nowhere else.” He uses the aspect of English language to represent the whole American culture that the author struggles to adapt to though it feels unnatural.

Though both Junot Diaz and Gustavo Perez have some striking similarity in the way, they perceive the impact on immigration, especially how immigrants cope with two cultures they have to live by they also differ in some ways. One of the main difference in their perception is brought by the location where they migrated to. While Gustavo Perez focused on individuals, who migrated from the Caribbean side Junot Diaz story focused on immigrants immigrating to American following the American dream from other parts specifically the Dominican Republic.

Gustavo wrote in one of his essays that ‘Sometimes the American dream is written in Spanglish.” While on the other hand Junot documents journey of Yunior family (Jiménez, 2018). It illustrates the way their struggle to find a better life through their father. It illustrates the struggle that Yunior family to adopt and take up the American culture which turned out to be quite challenging. This lack of accepting the culture is evident from their father who could not find happiness and later abandons his family.

The other difference between the two writers is anchored on the perspective that they look at immigration. Junot Diaz views this issue from a much broader perspective than Gustavo Perez. In “Drown’ Junot takes the reader from the point of migration to all the struggles the character went through. Through the use of these short stories, he had a chance even to indicate both the high and low moments of the characters who were trying to chase the American dream and at the same time coming to terms with cultural differences in America(Wong, 2016). Through the character of Ramon, Junot explores the high moment and low moments of the immigrants. Ramon enters America with a dream of starting a business that turned quite successful which was his high moment before he walked out on his family. Thus, in the end, Junot can give a more precise representation of the immigrants.

In contrast to Gustavo Perez focus more on the linguistic aspect of the immigrants. He expresses his indecisiveness in the choice of languages to as a result of interaction with various languages in his poem Bilingual Blue “Name your team; I’ll hedge;name your cerca, I’ll straddle me.’ The act of incorporating two languages in his work ‘Bilingual Blues’ is enough indication of his focus on a linguistic aspect of migrating to a country with a different culture. In one interview Gustavo acknowledges ‘I don’t have one true language.’ This results from the fact that he can communicate in English he does not feel as if he is a part of the English speaker’s tradition. The fact that he also lacks any native language makes him focus on the effect of the linguistics aspect as a result of an interaction. Language is a deeply embedded in a culture and understanding a language goes a long way in showing appreciation of for a culture. The ability of Gustavo to communicate in both Spanish and English is an attribute he understands its benefit and its drawback.

The last difference between Gustavo works and Junot Diaz is their unique approach to identity.To Gustavo, individuals get their identity from the culture that they grow in(Hall, 2014). He writes in his work about the Cuban-American culture, and this is evident in both ‘Bilingual Blues’ and ‘Turning the Times Tables.’ His ability to be a great verse with various language to the level of writing brings the affiliation of different cultures on his side which plays a big role in forming an identity of an individual. While the case of Junot in the ‘Drown’ he explores identity from the feeling of belonging to the American culture or way of doing things. To him for an individual who is successful in adopting American culture should be generally happier and get total — Acceptance which in the end brings the aspect of the sense of belonging. From this perception of Junot did not adopt the American culture successfully as he did not find happiness.

How Writing Has Changed the World: Junot Diaz and Gustavo Perez. (2021, Dec 02). Retrieved from https://studymoose.com/how-writing-has-changed-the-world-junot-diaz-and-gustavo-perez-essay 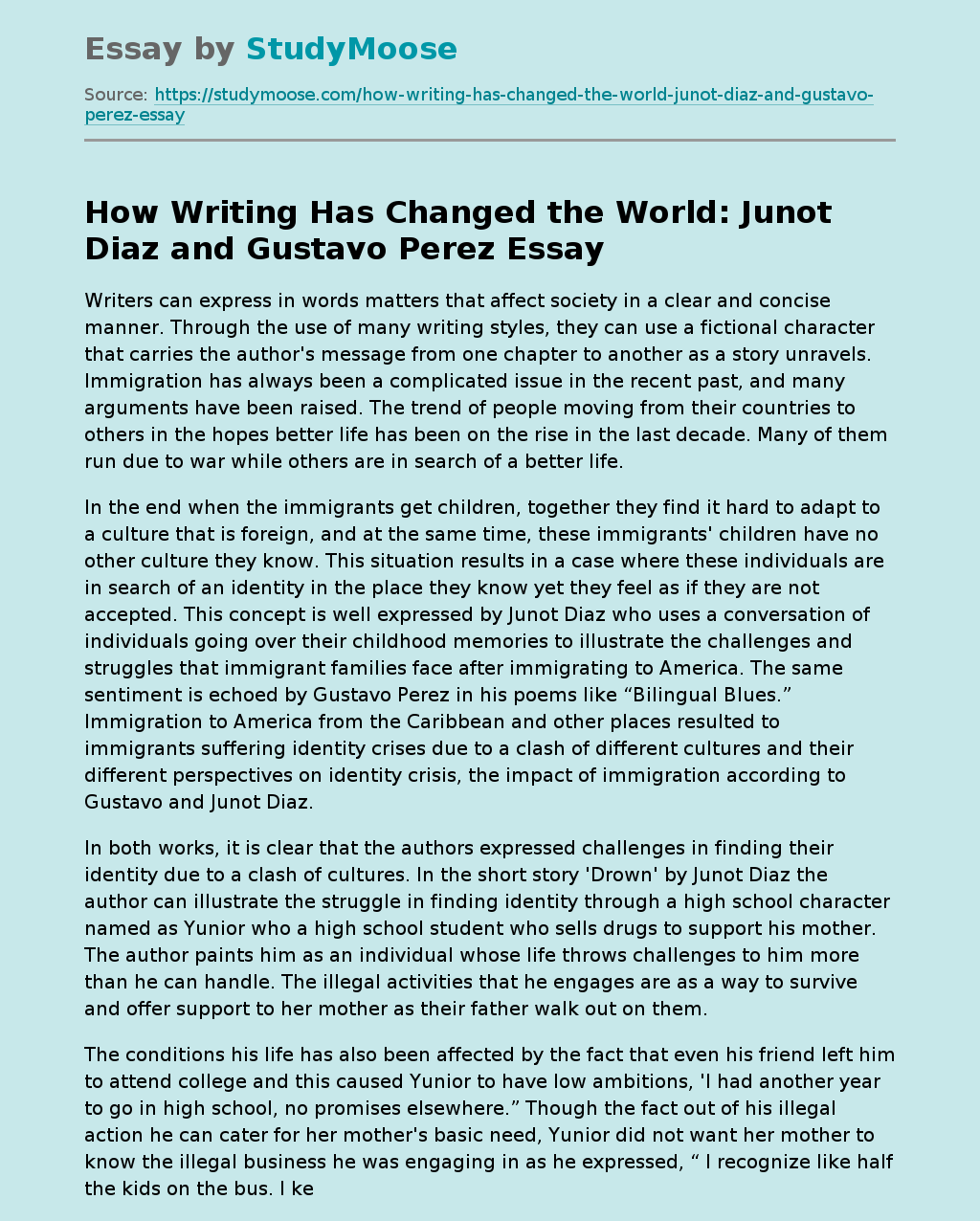