How To Become A Good Student?

Some people never learn effective study habits in high school. Thus, they may struggle through their first semester of college. A student should figure out how he studies the best. Many people cannot create a quality essay at four in the morning with the music playing and the television on. Although poor study habits may cause the student to struggle, which results in unhappiness, he can become connected by joining clubs, music groups, or sports that will help a person make more friends while balancing his life, thus making him a happier student.

Don't use plagiarized sources. Get your custom essay on
“ How To Become A Good Student? ”
Get custom paper
NEW! smart matching with writer

So, students should get involved! School does not have to be just about schoolwork. One should find an activity that his school offers, and he should join if his schedule allows. Yet, some people have a harder time adjusting to school than other people and may feel that success is impossible. However, a student can be successful in many ways, such as by being on time for class, managing his time and “study buddy”.

Proficient in: Duties Of A Good Student

For a student who wants to be successful, he must begin by getting to class on time.

To do this, he should make next morning preparations on the night before, such as ironing his garments on the night before class. This will save him at least five to ten minutes in the morning, and he may use that time to read the newspaper or take out the garbage. He also should put gasoline in his vehicle after he runs his final errand for the day.

This simple task will prevent him from having to wait for an available pump at the gas station in the morning when other people have decided to wait until the last minute to buy gas for their vehicles in their rush to work or school.

Then, one should purchase an alarm clock and batteries if he does not already own one. After completing the buying process, he must set this clock two hours before his first class is scheduled to begin. He should set his alarm to wake him with the annoying “beep, beep, beep” sound rather than the sound of soothing music. He must also resist the urge to hit the snooze button, which could cause him to be late for class if he hits it too many times.

By doing these daily activities in the allotted amount of time, the student will stay on schedule and be on time for class each day. The student must manage his time effectively. To achieve this goal, the student should designate specific hours to study and not take phone calls or accept visits because studying is more effective when the student has no distractions. The student remembers what he studies better at test time than he would if he were to stop periodically to talk on the telephone or visit with his friends.

People should think of college as a full-time job by putting in an eight-hour day, including class and study time. This dedication will be evidenced in the student’s grades. One should keep in mind that planning ahead is not as bad as it sounds. For example, if a student’s first class begins at 9:00 a. m. and his last class ends at 1:00 p. m. , he could be done studying by 5:00 p. m. and have plenty of time for visiting with friends and watching television, which make the demands of being a full-time student less stressful.

Therefore, students should find a way to make studying beneficial. Some students could really benefit from having a “study buddy” (someone to study with). The two could schedule a few hours in their assignment notebook for studying, and in the meantime, the two of them should take good notes during each class session. Students should be encouraged to take their own notes instead of borrowing someone else’s. Therefore, the student does not spend unnecessary time trying to make sense of the borrowed notes. Each student can create a quiz using the notes that he took in class.

Since most people would not create the exact same materials, this technique should help the student to become prepared for tests, thus ensuring coverage of material from the notes each “study buddy” has taken during class. The quiz method will help guide the student in determining what study techniques he should use. Being punctual shows that the person respects rules and possesses knowledge of academic policies, managing one’s time and “study buddy” are all necessities for becoming a successful student. A person must also have certain desirable traits to remain successful.

He should have a positive attitude to be assertive. He must have a sense of his goal to know why he gets up each morning at 7:00 a. m. because he could easily get a dead-end job and work the evening shift. He needs to be independent by doing so, he will know that he cannot and should not expect someone else to force him to do well in school. Most importantly, he should make the most of his education adventure. Most people generally get only one opportunity to succeed, so they should not let anything or anyone stand in the way of whatever they are trying to accomplish.

How To Become A Good Student?. (2016, Sep 08). Retrieved from https://studymoose.com/how-to-become-a-good-student-essay 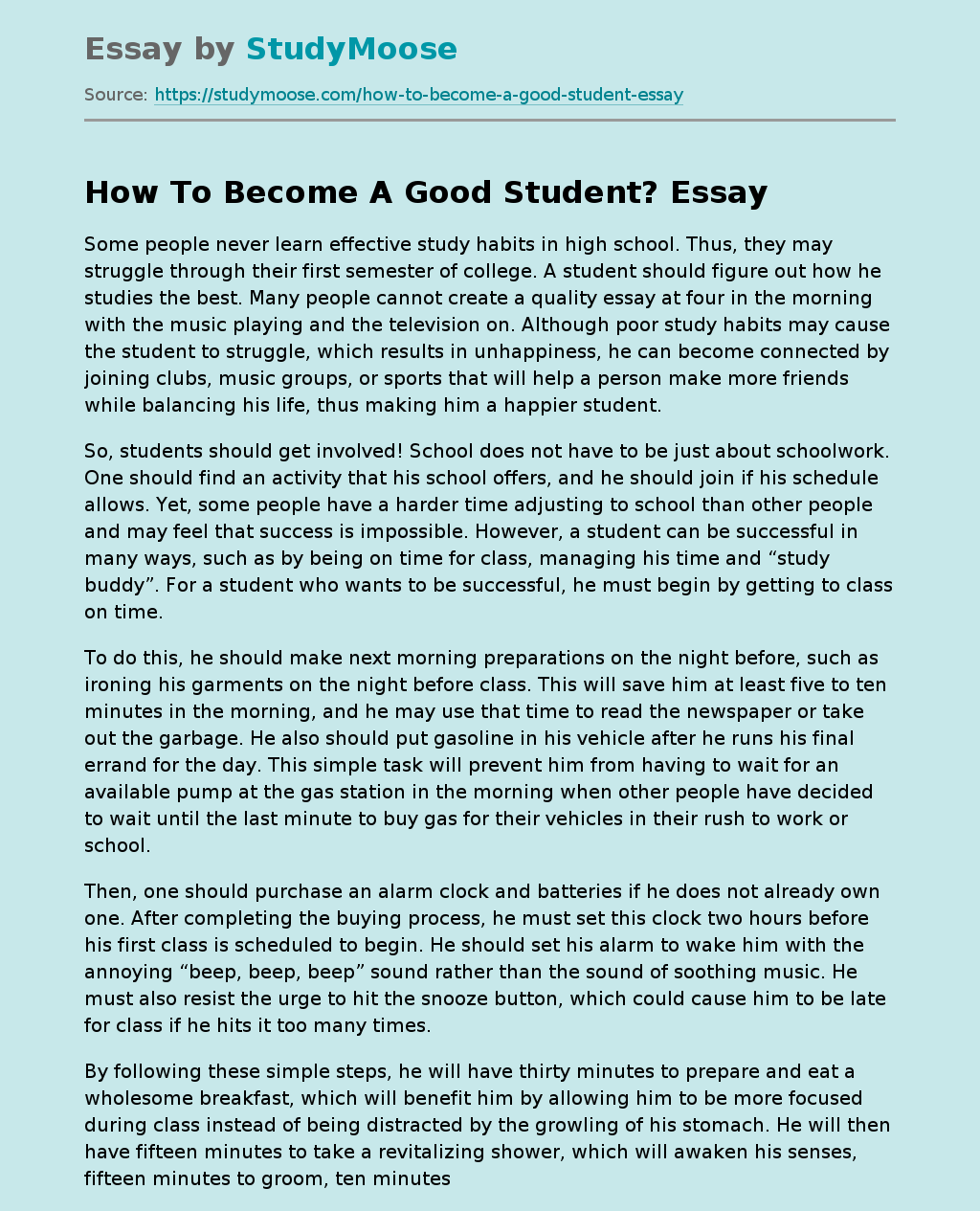