How different aspects of development can affect one another?

If a child has a physical difficulty, disability or delay, this could cause them to withdraw socially; find difficulty socialising; suffer with depression, stress or anxiety; lead to behavioural difficulties; find difficulty in communicating, regarding both speech and body language; and can affect their educational development. A child with a physical disability can often experience stigma concerning their physical competence and appearance, which may lead to impairment in social interactions, bullying and devaluation of an individual.

•A child that has a disability affecting their motor function will find difficulty participating in school sports activities.

Don't use plagiarized sources. Get your custom essay on
“ How different aspects of development can affect one another? ”
Get custom paper
NEW! smart matching with writer

If they are unable to participate and have to be kept out of these activities, they may feel socially withdrawn. Team sports help children to create friendships through team building exercises, which in turn develop their social skills. If the child can’t join in, they may struggle to make friends and will be missing out on this social development.

Non-participation of children, particularly those in wheelchairs, can become overweight due to lack of exercise. This affects their body appearance and can lower self-esteem, further affecting social skills and emotional wellbeing.

•Young children will often socialise during break times by playing games in the playground; these often involve running around. If a child finds difficulty running around, they may feel left out and unable to make friends. These break times also burn the excess energy that children have. If this energy is not burned, a child may focus this energy towards misbehaving/acting out.

This can also lead to a child finding it difficult to concentrate in classes, affecting their learning. This can lead to a reduced rate of cognitive development regarding reading, writing and problem skills.

•Children with severe visual and hearing impairments can find difficulty in building relationships and develop their social skills in the school environment. Often, these children attend schools designed to cater for similarly impaired children, making it easier for them to build these relationships and avoid bullying. However, an adverse effect of these schools may result in impaired children being unable to socialise with ‘normal’ people in the future.

•A common example of a clinical cognitive disability is Down syndrome. Children with Down syndrome can suffer problems affecting their physical development. These may include: obstructive sleep apnoea, which may result in sleepiness and fatigue during the daytime; lower rates of fertility; instability of the atlanto-axial joint, which can lead to spinal cord injury; low thyroid; hip dislocations occurring without trauma; slower growth rate; increased risk of epileptic seizures; and an increased risk for obesity with ageing.

•Children with Down syndrome often have a better understanding of language than ability to speak, and may suffer from a stutter or rapid and irregular speech. However, usually this does not impair their social skills. Children may also experience emotional and behavioural difficulties, such as an increased tendency for misbehaving and anger outbursts (including violence); and suffering with symptoms of depression and anxiety (often occurring during early adulthood).

•Children suffering from functional cognitive disabilities can struggle when it comes to learning, which can affect their social and emotional well-being. For example, if a child is behind with their reading and struggles during group reading sessions, they may find difficulty mixing with other children due to a feeling of ‘ineptness’. This can affect their social development and can cause the child to feel down or have low self-esteem (feeling ‘stupid’ or inadequate).

•If a child suffers from a speech impediment, such as a stutter, other children may find difficulty understanding them. This can result in limited interaction with other children, resulting in feelings of frustration, annoyance and a lack of confidence. This may even affect other areas of development as they can feel as though they can’t achieve, possibly causing low self-esteem.

Difficulties arising with emotional, behavioural and social development often occur from emotional and behavioural disorders (EBD); and social anxiety disorder (otherwise known as social phobia). Children with EBD can exhibit characteristics that adversely affect their education. These include: difficulty learning; difficulty building or maintaining interpersonal relationships with other children and teachers; inappropriate behaviour (e.g. acting out against their self or others) and feelings (e.g. low self-esteem/self worth and self harming); unhappiness or depression; and an increased tendency to develop physical symptoms or fears regarding personal or school problems.

•If a child suffers from depression can experience a loss of interest in social activities, work and life. They may withdraw socially and can often separate themselves from others, which in turn can have a detrimental effect on their ability to make friends. Withdrawal from lessons can affect cognitive development, with children having difficulties in furthering their skills in reading, writing and problem solving.

•Children with eating disorders can suffer physical and neurological complications. Often, young children who suffer from eating disorders consisting of malnutrition can have an impaired rate of growth; pubertal delay or arrest; increased risk of heart disease and arrhythmia; and neurological disorders such as seizures or tremors. Compulsive overeating can result in obesity, resulting in high blood pressure (hypertension), high cholesterol, type II diabetes and an increased risk of heart disease.

•Children with attention deficit hyperactive disorder (ADHD) act out their emotions as opposed to internalising them. They often exhibit behaviours such as fighting, bullying, cursing, and other forms of violence. This can have a detrimental effect on their social development if not managed from onset, conditioning them to feel that it is acceptable to act in this manner, and can also find frustration in communicating general information, thoughts and feelings to others. Children and young people with ADHD that exhibit violent behaviour are often subject to isolation from classes, suspension and exclusion from school, which has an adverse effect on their educational development. This can affect cognitive development, particularly regarding skills such as reading, writing and problem-solving. Children and young people with ADHD often achieve at a lower grade than others.

•A child with social anxiety disorder may cry a lot, freeze or have tantrums. They often fear the school and classroom environment, and avoid participation in school performances. Social anxiety disorder can result in reduced communicational development, as the sufferer may fear talking in groups, starting conversations, taking to authority figures and speaking on the phone. They may also exhibit physical difficulties due to fears of eating or drinking in front of people, resulting in malnutrition; low self-esteem and insecurity, especially regarding performance and body image, which may lead to the development of eating disorders; and the misuse of drugs or alcohol, which can result in physical complications.

How different aspects of development can affect one another?. (2016, Mar 18). Retrieved from https://studymoose.com/how-different-aspects-of-development-can-affect-one-another-essay 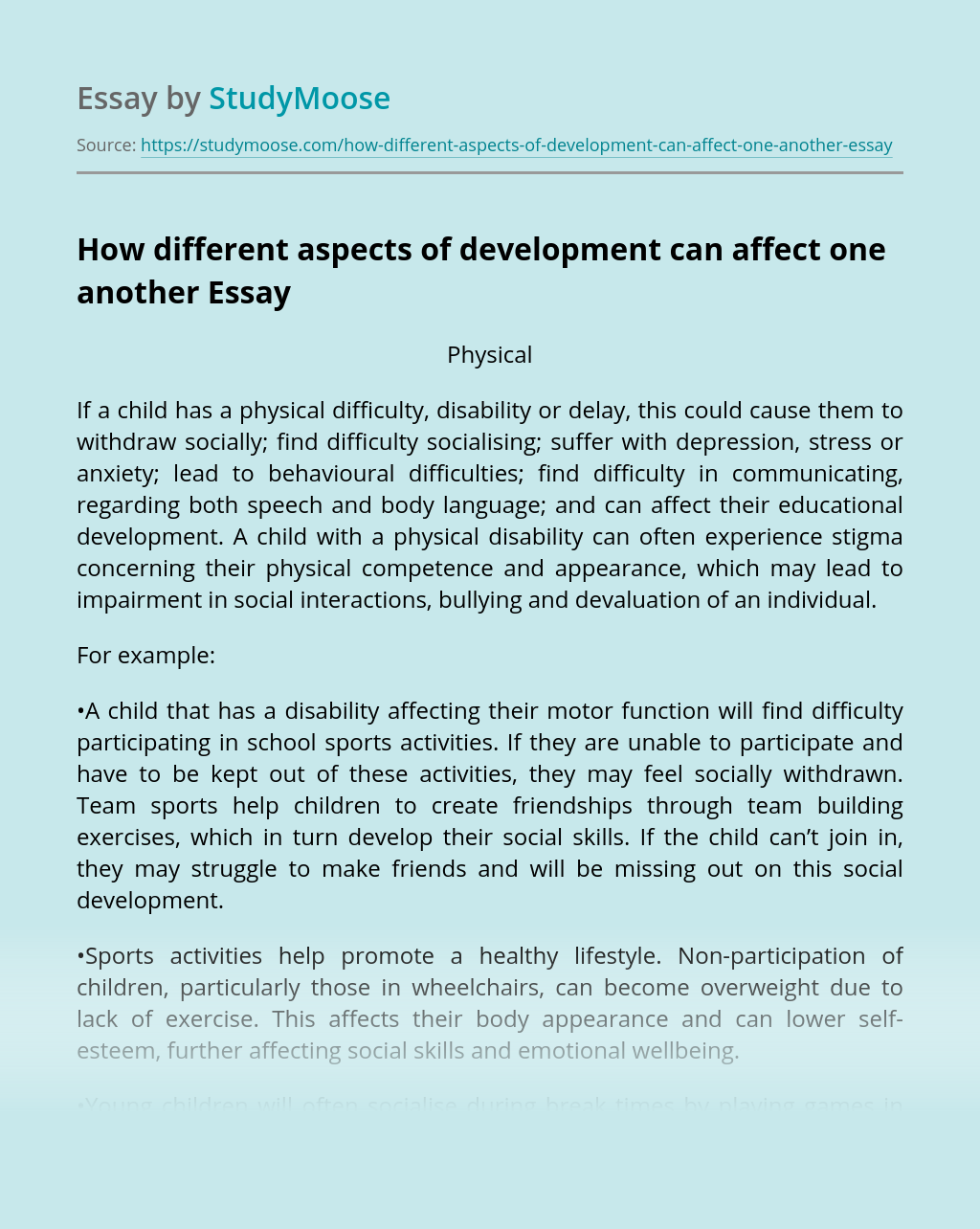