The Impact of Single Parent and Child Development

The controversy of single parenting is one of the major issues occurring in our modern society. As divorce and broken marriage increases, the product is the production of single parents in every community. Such situation does not only affect the couples, but most of all, the impact of the situation affect the children. Single parenting has proven vast influence and affliction in the development of a child, wherein at early stage the ideal family figure is shattered. Theoretical principles of parenting and models depicting the duties of ideal parenting are the essential concepts necessary in order to explain the most probable impact of such phenomena to the children.

Don’t waste time
Get a verified writer to help you with The Impact of Single Parent and Child Development
Hire verified writer
$35.80 for a 2-page paper

The effects of single parenting on child development have caused tremendous alteration in the normal physical, emotional, social and sexual development. Such scenario of single parenthood greatly impairs the ideal image of family instilled in the intrinsic concept of the child and family. Single-parent families are increasingly common wherein it comprises 25% of all children under pre-adolescent groups.

Single-parent families include never-married mothers, some of whom choose to parent alone, and parents who are divorced, some of whom share the custody of their children. Single parents face special challenges encountered during the course of family building, especially on the ideal perspective. Most importantly, most of these single parents tend to have far few economic resources and a much lower standard of living. Unfortunately, most of the situational effects are received by the children; hence, they are the ones that suffer most in the absence of the other parent.

Divorced parents and their children find the first year to be very painful, but research suggests that children who have a supportive, understanding, and affectionate parent tend to do well. Although the separated parent often is uninvolved with their siblings, many of these children remain emotionally connected to both parents, even when contact with the non-custodial parent is limited (Rudolph, 2003 p.510).

Dyad parenting plays an important role in the molding of the person’s identity and social concept. Each sex in parenthood contributes to the development of their children by either negative or positive reinforcements. In the case of single parent, the absence of the other parent greatly impairs the normal and ideal cycle of child development. Single-parent families usually conjure negative psychological, emotional, and identity needs among children especially if this situation occurs in the period of pre-adolescent

In this research, the primary subject to be discussed is the effects of single parenting in the child development. The research criteria shall involve the utilization of theoretical frameworks in aid of proving the latest and most detailed explanation of the said sing-panting impacts among children. Moreover, the study shall focus on the specific age group of 12 years old, which is primarily in the stage of pre-adolescent. The research shall utilize integrative analysis and critical data interpretation in order to provide the most accurate data implication in accordance to the study.

The following shall be the primary objectives of the study utilized in the over-all course of discussion.

The study shall cover first the review of literature involving parenting theories and parental duty-oriented models in order to provide the best possible implication of the study. After which, the discussion shall utilize these theoretical principles in order to gather data and analytic supports of single parenting and child development. The next course of study shall employ the gathered data and utilize in integration and analysis of the proposed subject, which shall be stated in the section of discussion and analysis. Lastly, the study shall provide the conclusion of the over-all data gathered, analysis, integration, and data interpretation.

Moreover, this age group is noted to progress certain difficulties in their future marriage, and earlier childbearing compared with children of two-parent families. Because single-parent children appear more vulnerable to a wide variety of societal problems, these children have been routinely referred to as at risk for developmental difficulties (Bornstein, 2002 p.109-110).

In spite of all the difficulties that single parents face, many are highly successful in the childcare that they provide; hence, some pre-adolescent children still strives the normal course of development. However, children brought up in single parent families are still predicted to be at risk unless there are major social changes to provide more adequate support, and ways can be found for children to maintain satisfactory contact with their absent parents. The trend of dysfunctional parenting and broken relationships is likely to continue until training and help with relationships for children are given a higher priority by society (Polany, 2002 p.430).

Usually when we think of single-parent families, we think of them as being headed by women. Although this is generally true – about 82% of single-parent families are headed by women – the number of men heading such families is rising dramatically. In 1990, 14% of single families were headed by a man; in 1999, the comparable figure was 19%. Many single parents have the added responsibility of providing role models for their children of the opposite sex (Bruess & Greenberg, 2004 p.117).

Conceptual models of parent-adolescent relationships and theoretical principles of parenting vary in whether their primary focus is on the adolescent or on the relationship. The prevalent perspective for most of the last century was that pre-adolescents’ physical, cognitive, and social maturation produced inherently unstable relationships (Lerner & Steinberg, 2004 p.332). The theory of Erik Erikson’s psychosocial development particularly identifies pre-adolescent as a period of crisis, where the task is to sort out and establish an individual identity that is distinct from that which may have been established in this stage. Usually these children are self-conscious and perceive strangeness in their body due to pubertal and hormonal alterations. The age of group of 12-years-old is one of the most sensitive stage in the pubertal development cycle, which perceives great value in terms of the people’s outlook over them, social environment, and gender task roles (Cooper, p.51).

In the theory of behavioral and social learning theory, the main aspect that influences child development through parental intervention is life experiences together with the parental presence. In behavioral theory, primary focus is given to operant principles or external contingencies as processes that shape human behavior. Greater attention is given to environmental factors than internal factors.

In social learning theory, the primary focus is given to learning experiences that occur through reciprocal social interactions. Social learning theory emphasizes the socializing influence of the family. Researchers have studied families by comparing those with and without situational impairments in order to examine behavior differences in the home environment. They have concluded that those with lesser familial conflicts produce lesser problematic behavior, while those with presently and evident familial difficulties, such as single parenting, produced behavioral alterations in the children (Condie 2003 p.114).

Another theory proposed is the psychoanalytic theory, which was introduced early in the twentieth century by Sigmund Freud, has been critiqued and modified in different ways ever since. It states that per-adolescent is a time of plasticity, and consequently, parent-child interactions have profound effects on children’s later functioning. The theory utilized the concept of libido as a driving force for the actions and motives implicated by this age group. Psychoanalysts view parents as agents of control in the early years and sources of moral values on identification. Thus, parents play a major role in shaping children’s morality, although sometimes it can be unintentional (Bornstein, 2002 p.109).

In the concept of family systems theory, the parents are viewed as the primary goal-directing unit that is interdependent to one another. The theory views the family as a relatively open or closed system; that is, the family interacts, to a greater or lesser extent, with other systems (Engrebretson & Littleton, 2002 p.63). The family is viewed as an organized completely comprised of related elements and subsystems. As such, t has properties that are not reducible to its constituent parts.

Most notably, the family system has a hierarchy denoting the power relations among members and boundaries that demarcate and define the rules for interactions between subsystems. Finally, families are open systems that are influenced by events occurring in their environment. Families consistently and progressively change as they adapt to these outside forces, as well as to internal forces such as the development of their individual members. However, in the case of single parenting, the primary directing unit is impaired (Bornstein, 2002 p.109).

In the research conducted by Murry and his colleagues (2002) indicates small differences in social-emotional and academic functioning between preschool and pre-adolescent groups from single-parent families. Specifically, pre-adolescent children residing in single-parent households, exhibited slight elevations in reported behavioral problems and poor conflict management techniques, as well as reductions in social skills and academic achievement compared to youth from two-parent families. However, according to their studies, when income level is controlled, such differences dissipate (Lee, 2005 p. 506).

According to investigations of pre-adolescents from divergent family forms revealed that superficially adolescents from single-mother households appeared to be (Lee, 2005 p. 506):

The rate of single-parent families is increasing in the United States with the last dated rate of 19% in 1999. It is expected by the theorists that such increase will continue in future due to various interacting factors in the environment, such as increased rate of divorce, separation, etc. Single-parent families are mostly above 18 years old since, only 29% of them are rated to be below 18 years old, which depicts probable lesser count in pre-adolescents. According to the theoretical principles of Erikson, pre-adolescents or children in the 12-year-old age group, which is in the stage of identity search, are very much conscious, sensitive and very much particular in the perception of their social environment towards them.

Utilizing now the theoretical principles of behavioral theory, we have noted that behaviors are primarily molded in homes by the interacting forces, and one of the main units is the parenthood. If this familial unit is impaired, insecurity and behavioral problems results among pre-adolescent as caused by either social ridicule, personal decrease of self-esteem, etc. With the impaired family, behavioral identity of these children is impaired as well as supported by the psychosocial theory of Erikson.

In addition, the psychoanalytic theory of Freud mentioned that parental gender is essential to the development of moral principles of the child; hence, comes with behavioral problems is the impairment of moral judgment. Growing in a single-parent family may cause them to carry the effects until they grow old implicating probable negative and positive effects. As for the theory of family systems, the guiding unit is very much impaired resulting in the probable faulty correction or inadequate disciplinary subsystems for the child’s behavioral and moral deficit.

The Impact of Single Parent and Child Development. (2017, Apr 03). Retrieved from http://studymoose.com/the-impact-of-single-parent-and-child-development-essay 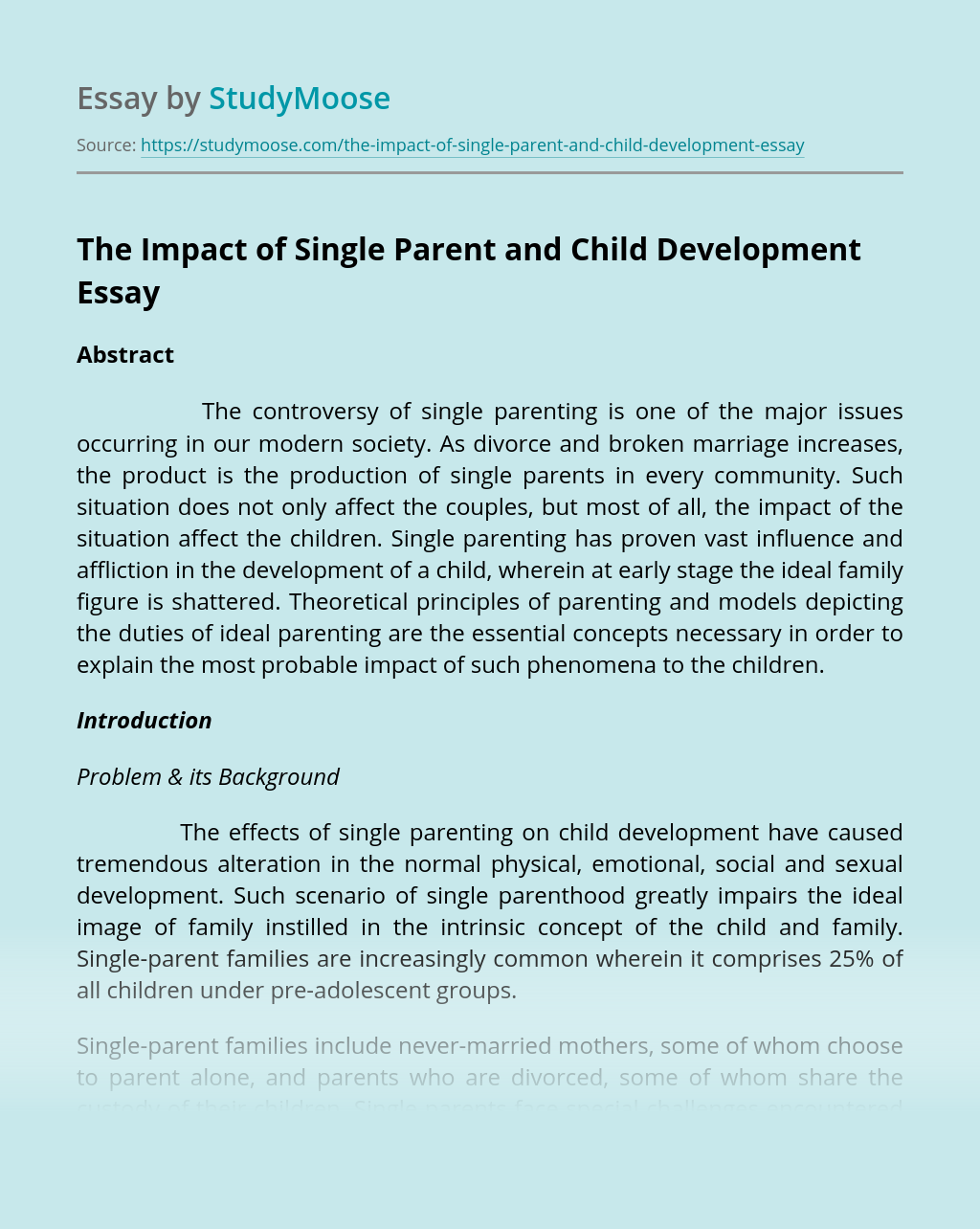 Don’t waste time
Get a verified writer to help you with The Impact of Single Parent and Child Development
Hire verified writer
$35.80 for a 2-page paper
Stay Safe, Stay Original