How did the First World War Start?

World War 1 also known as the Great War was a global war that was centered in Europe and fought by two opposing alliances, the triple alliance which consisted of three countries; Germany, Austria-Hungary, and Italy the other alliance was triple entente which consisted of three other countries; Britain, France, and Russia. World War one was fought from July 1914 to 11th November 1918. The war lasted 4 years, 3 months, and 14 days. There were over 15 million people that died and nearly double that was injured.

Don't use plagiarized sources. Get your custom essay on
“ How did the First World War Start? ”
Get custom paper
NEW! smart matching with writer

The causes of world war one was; Imperialism, Militarism, Alliances, Nationalism, and the Assassination of Archduke Franz Ferdinand, heir to the Austrian-Hungary empire.

The scramble of Africa led to the start of world war 1 because of its increased rivalry between the European nations as they fought each other for territory in Africa and control over different regions.

Militarism can best be understood as the build-up or expansion of the ability of a country’s military to wage war. In the decades before World war 1 many European countries began to practice militarism and worked to expand and strengthen their military forces. for example, there was an intense arms race and naval race between several European nations in the build-up to World War 1.

Specifically, France and Germany were heavily involved in an arms race in which each country doubled its armies between 1870 and 1914. Both nations had a history of war against each other and their rivalry caused them to expand their military forces. At the outbreak of fighting in 1914, France had over 1 million soldiers while Germany had over 2 million. This arms race showed the distrust between the nations of Europe and when war did break out in 1914 it allowed the countries to go to war more easily.

Increased military and naval rivalry led not only to the belief that war was coming (The German ruling group felt that only through war could Germany become a world power. Military preparations strengthened this belief.) and increased in military control of the civilian government (particularly in Germany and Russia) also increased cooperation among the military staff of the countries of the same camp. For example, all three Entente powers held secret military talks. The British and the French naval authorities agreed that the French navy should be concentrated in the Mediterranean and the British in the North Sea. Germany and Austria also had military agreements. When the First World War was fought, it was to be fought by all powers because they had made the military plan cooperatively.

Nationalism Is best understood as when a group of people identifies with each other and display beliefs, values, ethnic heritage, relationship to land, language, culture, and customs. For example, both Germany and Italy unified from many separated kingdom states into unified nation-states in the 1800s. These separate kingdoms unified as the people in those regions began to identify with each other and as nationalism swept across the people of Europe. Nationalism was a major cause of World War 1 because it caused tensions and unrest to grow in certain parts of Europe. For example, the Austro-Hungarian Empire was not made up of one single nation but rather consisted of many different groups. many of these groups sought to have control over themselves and wanted sovereignty from the rule of the Austro-Hungarian Empire. This created a great deal of unrest in the empire. This was especially apparent in the Balkans, which is a region in Southeast Europe that contains many different nation-states. In the years before World War 1, the Balkans was under intense nationalistic tensions. This was primarily due to the rise of nationalism tensions.

This was primarily due to the rise of nationalism in Europe and the influence of Austria-Hungary in the region. The Austro-Hungary Empire extended into the Balkans on its southern borders and in the years before world war 1, it attempted to extend its control over the region. Many historians now refer to the nationalistic tensions that were created in the region as a “powder keg”. Meaning that the tensions were so extreme that they were like a bomb ready to explode at any moment. Ultimately the assassination of Austro-Hungarian archduke Franz Ferdinand in June of 1914 was the “spark” that lit the match of the Balkans Powder Keg and plunged Europe into world war 1. Nationalism as a movement in Europe in the years before World War 1, created the tensions necessary for a small event like the assassination of Franz Ferdinand to explode into the worldwide conflict that it became.

In 1911 the French helped the sultan of Morocco to end a rebellion against his role, this gave the French an opportunity to take Morocco. The French said they would pay countries that we’re concerned by this action. The British feared that Germany was going to challenge its naval power when Germany set up a naval base in Morocco. Britain then made a naval agreement with France – they would defend France if there were attacked at sea. France took over so Kaiser Willhelm backed down this Morocco crisis was a clear victory for France and the Triple Entente however Kaiser Wilhelm was determined not to lose in a future crisis.

On June 28 1914 Archduke Franz Ferdinand of Austria and his wife Sophie were shot to death by a Bosnian Serb nationalist during an official visit to the Bosnian capital of Sarajevo. The killings sparked a chain of events that led to the outbreak of World War 1 by early August. On June 28, 1919, five years to the day after Franz Ferdinand’s Death, Germany and the allied powers signed the treaty of Versailles, officially marking the end of World War 1.

The war ended on the 11th of November, at the 11th hour of 1918. The cost of the war was substantial both in dollars and in human life. The Treaty of Versailles which ended the war with Germany was to lay the seeds for WW2. The War reshaped Europe, destroyed Monarchies and empires, established communism and socialism as new dominant forces in the world, and recognized the supremacy of individual countries.

How did the First World War Start?. (2020, Oct 31). Retrieved from https://studymoose.com/how-did-the-first-world-war-start-essay 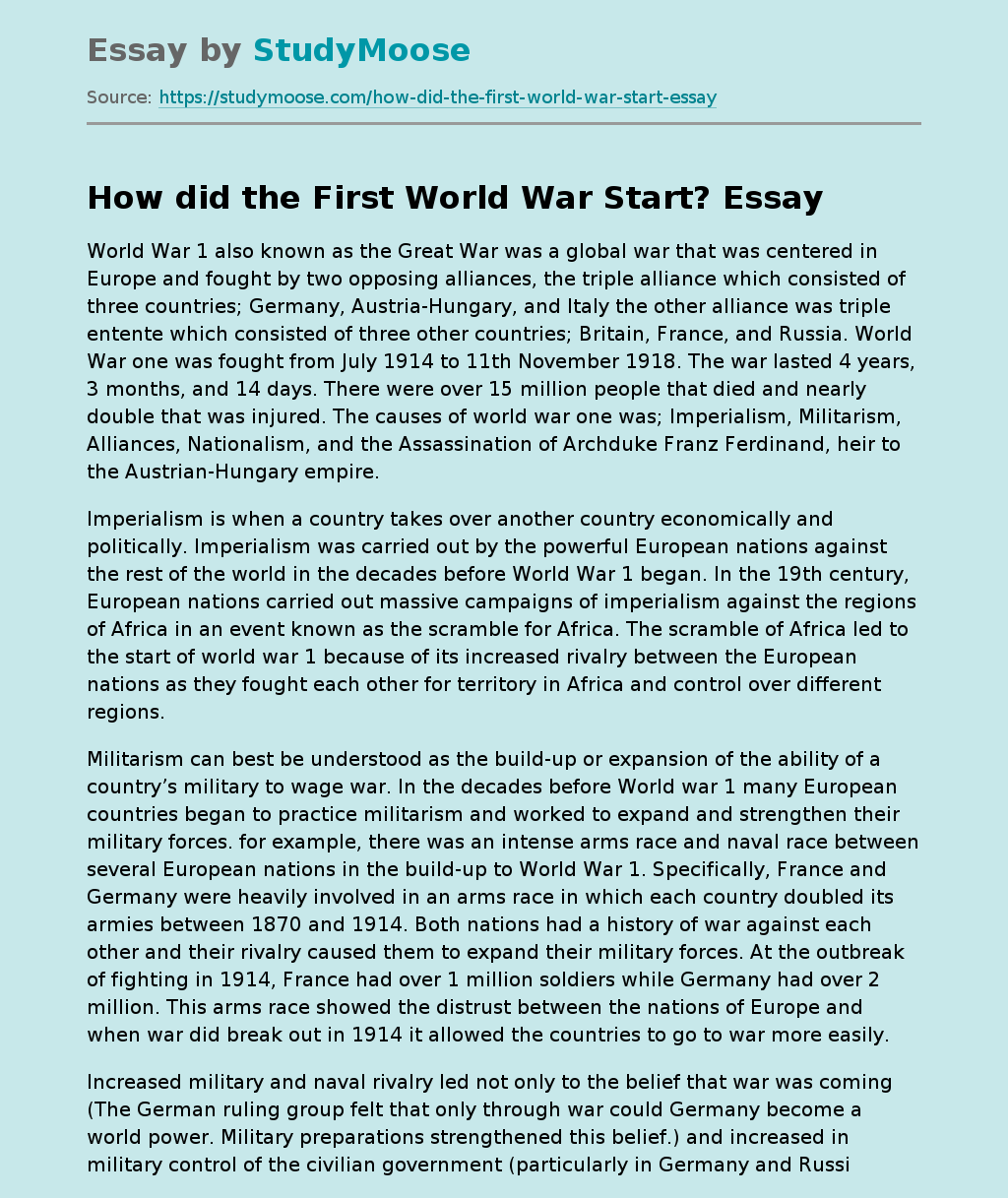