How are fire scenes different than regular crime scenes for investigators?

They are different than regular crime scenes because fire scenes have a different procedure. Plus, most fires scenes don’t require a search warrant. This is because it can take a long time to get a search warrant but with fire scenes it is crucial to get the evidence as soon as possible because causes of the fire, like petroleum, can evaporate within days, or even hours of the fire. Also, they need to know how to prevent the fire from starting again and possibly injuring fire fighters or other emergency responders.

Don't use plagiarized sources. Get your custom essay on
“ How are fire scenes different than regular crime scenes for investigators? ”
Get custom paper
NEW! smart matching with writer

What is the blast effect?

What is a substrate control? Why is it done?

A substrate control is an uncontaminated substance. It is taken to allow forensic scientists to compare the two samples to each other and observe whether a flammable liquid is present. How is the evidence from a fire scene collected? What should be avoided?

Search warrants are not required for fire scenes because the evidence at fire scene needs to be collected as soon as possible because it is important to determine where a fire started and why in order to prevent the fire from starting again and possibly injuring fire fighters or other emergency responders. This wouldn’t be possible if we had to wait more than a couple hours for a search warrant. Do you think more countries should adopt the practice of putting color coded chips in explosive materials? Why or why not?

I absolutely agree with the adaption of putting color coded chips in explosives. These chips allow forensic scientists to track down viable information about the explosive that will help find the culprit responsible for the explosion. Why do you think crime scenes involving homemade bombs have increased?

I think homemade bomb crime scenes are increasing because of the opportunities we now have. This includes the internet, which tells us how to make the bomb, and stores that sell and/or produce the supplies for making the bombs. Why do you think the procedures are different from normal crime scenes to those involving fire and explosions? What benefits or challenges are there because of these different procedures?

I think the procedures are different from normal crime scenes to those involving fire and explosions because with fires and explosions the evidence that forensic scientists need to investigate the crime scene can be destroyed quicker than that of a normal crime scene. This is also the major challenge, it can be very cumbersome working fast to retrieve this evidence in such a small window of time, that it creates a lot of room for human error. Including the retrieving process and preserving of evidence. Benefits could include not having to wait for a warrant, which is just irritating, because you could be investigating the crime scene and moving forward with the investigation but you cant.

How are fire scenes different than regular crime scenes for investigators?. (2016, Mar 19). Retrieved from https://studymoose.com/how-are-fire-scenes-different-than-regular-crime-scenes-for-investigators-essay 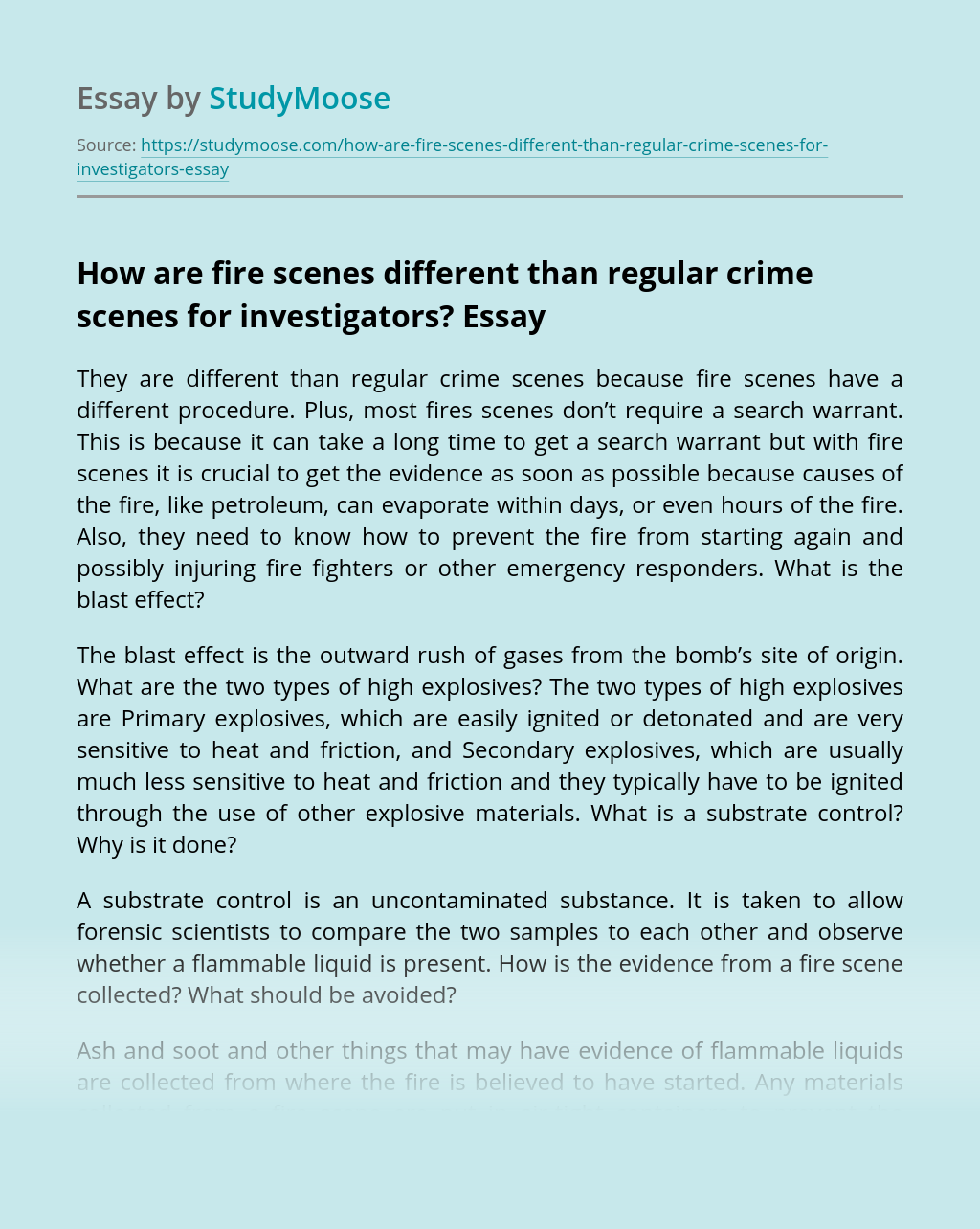