Hope: The Essence of Life

Hope is a universal thing. Spanning across every country to every continent. Infused in every culture, language, and belief system. Hope is why people wake up every morning. It is the essence of life that gives the positive mind power. But the question to be asked is how does a person maintain and manage such a flimsy yet powerful thing like hope? How through all the suffering and injustice does a person maintain hope in times of hardships? As individuals facing what seem like constant and infinite disappointments in the big, unpredictable world around us, and it’s often difficult to remember that suffering is finite.

Don't use plagiarized sources. Get your custom essay on
“ Hope: The Essence of Life ”
Get custom paper
NEW! smart matching with writer

Despite both the Rwandan and the Cambodian genocide articles portraying people maintaining hope in times of adversity, Soy Gemza’s harrowing description of resilience in the face of hardship and privation is the most intense. What sets Soy’s story apart from Imaculee’s is not experience. Both Soy and Imaculee witness and experience many horrific things. But what makes Soy’s story hit harder is the extremely graphic and vividly detailed account of his story which has an almost instantaneous effect on the reader.

Coupled with the vividness of the things he describes, and the young age he witnessed them at, Soy’s story is far more detailed and has a much better display of how a person keeps hope during hard times. His story incites raw and fervent emotions in the reader, making them wonder how something so horrible could happen to someone so young and so recently. Despite this, Gemza’s article is not on par with Elie Wiesel’s Night. Despite his article being incredibly detailed, Night provides a far better example of finding hope in hardship.

Imaculee’s story also presents similar ideas of hope being maintained during times of great adversity. During the genocide, she had to maintain hope that the horribleness around her would soon end and that one day, she’d be able to return to her old life. Imaculee had to hide in a tiny, cramped bathroom “for days, then weeks, then months,” she and the other women had only the desire to live to see another day, surrounded by people who either did not care whether they died, or wanted to kill them. The article first begins by providing background information on the Rwandan genocide. It states the Rwandan genocide as being “the most efficient ever carried out… 800,000 people were slaughtered in just 100 days.”

What made this genocide the most efficient ever carried out was not the systematic rounding up of marginalized or minority groups as had been done in places like Nazi Germany. There were no soldiers, armies or militaries. What made this the most effective was the fact that people were killed right in their tracks. Slaughtered by those they had once considered friends, and even family. Sympathy and humanity were thrown into the wind. The Hutus committing the genocide were consumed by nothing but their hate for the Tutsis. In order to survive, Imaculee had to keep hope that the horrific things occurring around her would soon be over. Although this source does captures many aspects of a person maintaining hope, it is nowhere near as powerful or as detailed as either Night or the Cambodian genocide article.

Elie’s story in his book Night, is by far the most potent example of a person maintaining hope in times of great adversity because Elie almost loses all hope in many difficult moments in the book. This loss of and recouping of hope is the best sample of the perseverance of the human spirit and by far the best example of a person maintaining hope in times of adversity. Throughout the book, no matter how hard the trial, Elie would example, in this quote, “Mother is still a young woman, my father once said. She must be in a labor camp. And Tzipora, she is a big girl now. She too must be in a camp…”(46).

Elie gathers hope for his sisters and mother’s survival from his father. They both tell themselves that the rest of their family is safe and alive, despite knowing that they most likely are not. This is what makes Night stand out the most out of all the sources. It shows the different sides of hope. Not only does it show the hope that is necessary to keep going on, but also the type of hope that is often very dangerous: false hope. False hope lead not only Elie but his community in Sighet to believe at first that nothing bad was going to happen to them. It was what made them stay in Sighet, with the false belief that the same thing that was happening to Jews all over Europe would not happen to them.

Hope: The Essence of Life. (2021, Apr 26). Retrieved from https://studymoose.com/hope-the-essence-of-life-essay 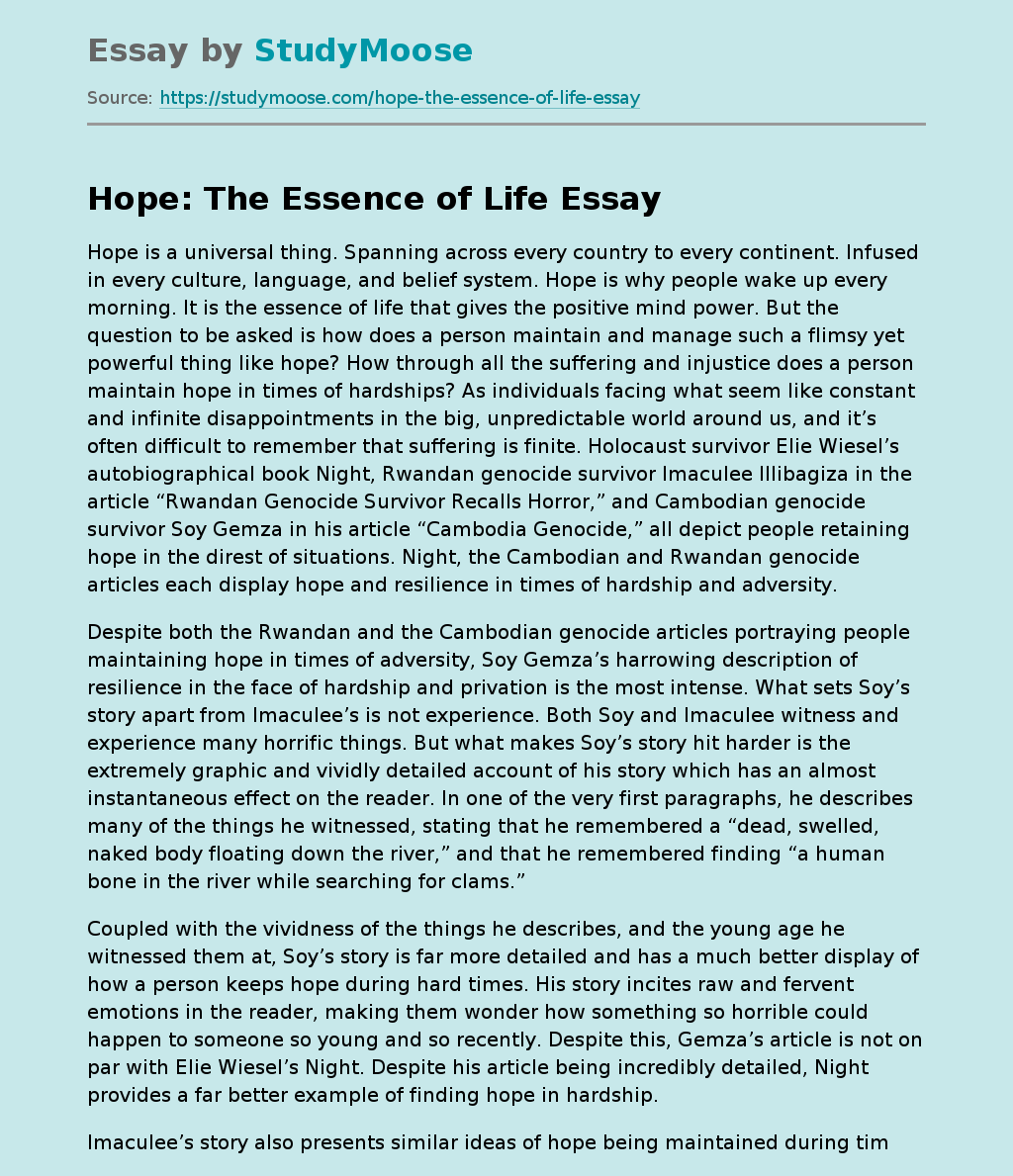