In 2010, Hong Kong Disneyland entered into a long-term loan from the Government of the Hong Kong Special Administrative Region which is scheduled to mature on dates through 2030. The decrease of Non-current liabilities was attributable to the conversion of a portion of this loan into ordinary shares, partially offset by deferred interest expense.

The decrease in current liabilities of 74 percent had mainly due to repayment of the short-term borrowing. In 2011, The Walt Disneyland Company received ordinary shares of Hong Kong International Theme Parks Limited, which was the owner of Hong Kong Disneyland, in exchange for its capital contribution, and an equivalents amount of the government of Hong Kong Special Administrative Region provided the loan in converting into ordinary shares.

On past 4 year, the total liabilities is drop 29.

3%.the reason is between 2009 to 2012 the Walt Disneyland Company received ordinary shares of the Government of the Hong Kong Special Administrative Region in exchange for its capital contribution, and an equal amount of the HKSAR provided loan was converted into ordinary shares. So, the liabilities decreased rapidly between 2010 and 2012. In contrast, the equity is increased rapidly by above reason. And the increasing rate in shareholders’ equity is greater than the rate of decrease in total liabilities, so the debt to equity ratio is decreased gradually. The rate between 2012 and 2013 is stayed stable.

it is because the last theme-Mystic Point opened in 2013, it marked the completion of the 2009 theme park expansion plan. Therefore, the large capital contribution is not required.

In 2009, Hong Kong Disneyland has launched a expansion proect. The expansion plan comprises three new themed areas with a total land-take of about 23% of the area of the existing theme park such as “Grizzly Gulch” and “Mystic Point” and “Toy Story Land”. Because of this project, there will be more than 30 new attractions, entertainment, and interactive. The non-current assets of HK Disney are increase due to the launch the expansion projects and addition of operational assets. The last theme-Mystic Point opened on 2013, it marked the completion of the 2009 theme park expansion plan.

The increasing in current assets was primarily attributable to net cash generated from operating activities and capital injection from TWDC to fund the expansion. The Debt ratio measures the proportion of assets financed by debt. The higher the debt ratio, the more heavily leverages the business. (The higher the leverage, the more risky the business is considered to be.) The graph shows that the debt ratio is decrease. It shows that in 2010, the Hong Kong Disneyland is less vulnerable to downturns in the business cycle because it has liability to repay the loan principal at maturity whether the business is profitable or not. Debt-to-equity ratio is a measure of the gearing of a business, that is, reliance on debt to finance its operations. The higher the debt-to-equity ratio, the more heavily the business relies on debt financing instead of equity financing. Past four years; Hong Kong Disneyland has a ratio that below one, it means Hong Kong Disneyland is considered to have low gearing. 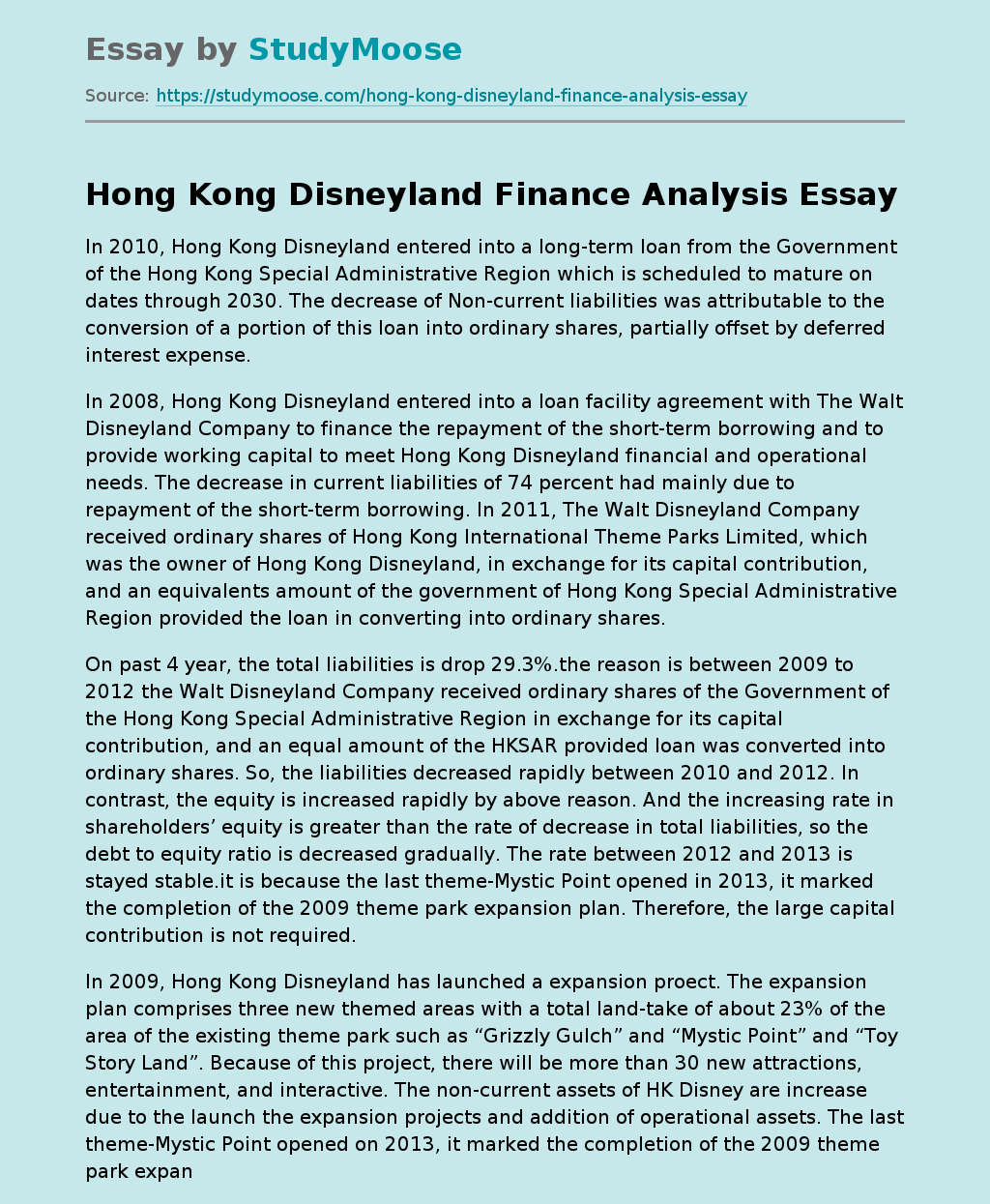