In the beginning of The Hobbit by J.R.R. Tolkien, Gandalf, a supporting character, describes Bilbo, the protagonist, as a great thief and the perfect member a team of dwarves require for their expedition. During the start of their adventure we see that Bilbo is not very keen on going, but as he embarks on these adventures, he gradually begins to rely on his own abilities and starts to take initiative. In The Hobbit, the protagonist, Bilbo Baggins, changes from a mere thieving hobbit to an admired hero by stepping out of his comfort zone, the strength and bravery Gandalf sees in him, and through the trials he overcomes.

Don't use plagiarized sources. Get your custom essay on
“ Hobbit to Hero: Transformation of Bilbo Baggins ”
Get custom paper
NEW! smart matching with writer

Hobbits are laid back, easy going, love peace and quiet, like to live in comfort and are inclined to be fat. Bilbo Baggins had all of these traits and qualities, being a hobbit, but being a Baggins also made him predictable, “…. you could tell what a Baggins would say on any question without the bother of asking him.

” (p2). Bilbo’s mother, Belladonna Took; being a Took meant she was adventurous and did unhobbit-like things. Even with his mother’s Took blood present in him, he chose to stay home; which he’d rather do anyways, but upon the arrival of the dwarves and Gandalf, Bilbo finds something that stirs up in him and is convinced to go on the great quest. By going on such an adventure, Bilbo was going against typical hobbit behavior, in doing so, upon his arrival home his hobbit neighbors and friends lost respect for him.

Knowing that Bilbo was the ‘man for the job’, Gandalf encouraged him to join him in their quest for Thorin’s gold. Even though Bilbo was just a simple hobbit, Gandalf knew that he had Took blood in him, and that he longed for adventures, so he was sure that Bilbo would be a great adventurer. The dwarves and Bilbo doubted Gandalf, but he knew that Bilbo was needed. Gandalf thought that they would doubt him, and that Bilbo would doubt himself, but he assured them that he was the one needed, “There is a lot more in him than you guess, and a deal more than he has any idea about himself.” (p19). With Gandalf’s encouragement, even with the dwarf’s doubt and Bilbo’s in himself, he goes on the expedition in search of these qualities that are seen in him.

Bilbo overcomes the obstacles in his path throughout the adventure by taking initiative and by displaying leadership. When Bilbo makes a reluctant attempt at taking a troll’s wallet, he displays the beginning of his transformation from a simple hobbit into a Tookish adventurer. After Bilbo slays a spider, he displays his hidden courage and bravery that has been in him this all along. Naming his sword after killing the spider is a major turning point in his conversion into a hero; since in ancient epic literature a named sword is a sign of bravery and heroism. Bilbo finally begins to see himself as a hero when he is speaking face to face with the great dragon Smaug, as he begins to create a name for himself, “… I am he that walks unseen… I am the clue finder… I am the Ringwinnner…” (p152). This would have been a difficult task for anyone, as everyone feared the dragon for one reason or another.

As we see Bilbo went against traditional hobbit ways, but became better for it as he discovered hidden qualities in himself that made him a better hobbit. He became a hero and a leader by facing the challenges bestowed upon him head on. Even though he may have lost the respect of his fellow hobbits, due to his new Tookish nature, he has gained the title of a hero throughout the land. 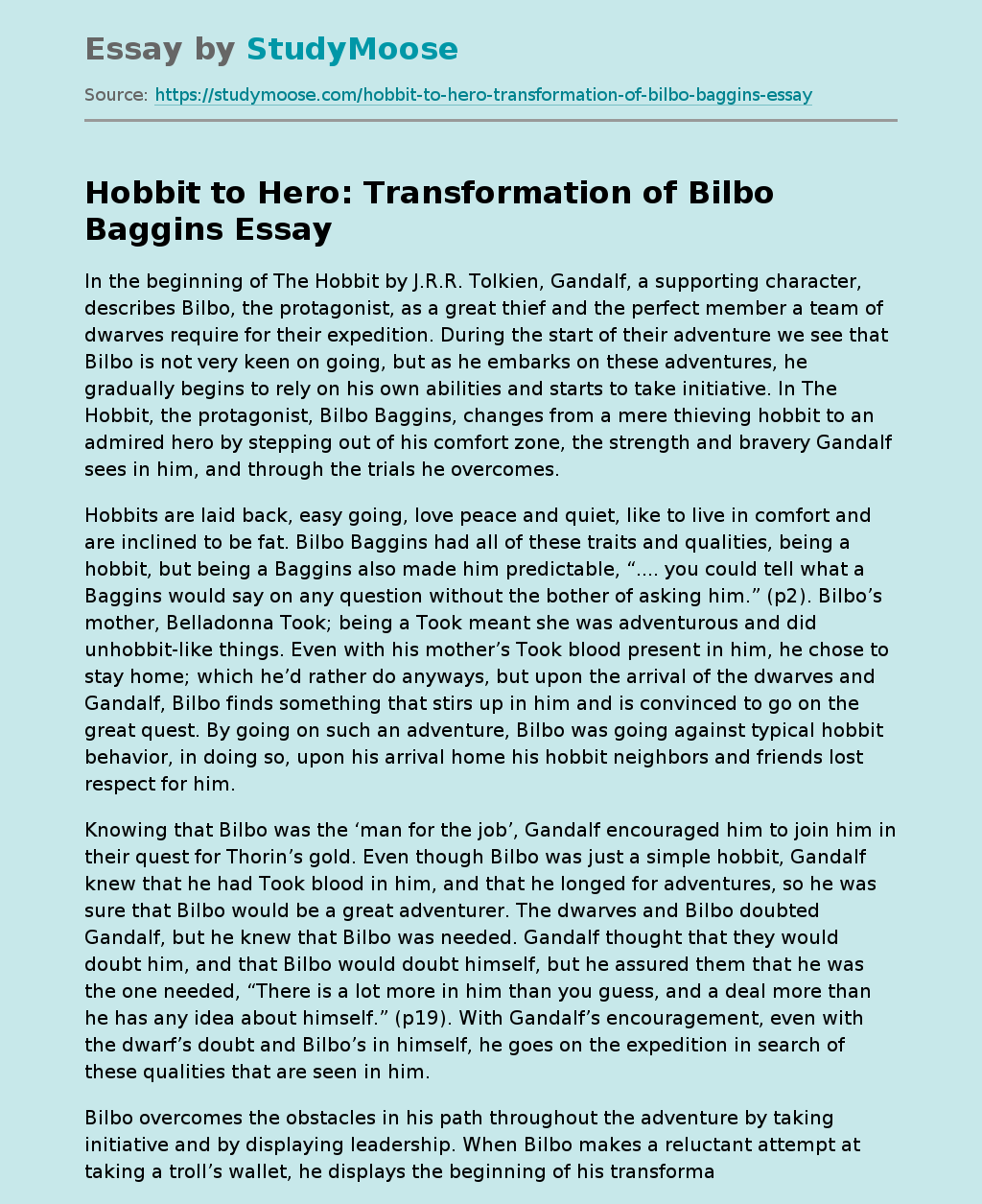