‘Here’ is a poem exploring Larkin’s flight of imagination as he travels from London to Hull on the train. It is the first poem in The Whitsun Weddings collection and seems to be an appropriate introduction because, much like his other poetry, it looks at humanity’s place in the world and the effect of consumerism.

Turn in your highest-quality paper
Get a qualified writer to help you with
“ “Here” by Philip Larkin ”
Get high-quality paper
NEW! AI matching with writers

Following the pattern of many other poems in this collection, ‘Here’ begins with physical ideas of ‘rich industrial images’, before becoming more abstract in the final stanza. By beginning the poem with the participle, ‘swerving’, Larkin immediately gives the reader a sense of the moment being suspended in the present, before an unpredictable, fast movement, which is not usually associated with travelling on a train. The word itself is sudden, describing an immediate action and repetition of this throughout the first stanza emphasises this sensation, creating a feeling of Larkin’s thoughts being free and unrestrained.

The beauty of this movement is then contrasted by the sharp sounds of the ‘thin and thistled’ fields, bringing attention to the change in surroundings, from the town to the countryside.

By listing what he sees from the window of the train – ‘scarecrows, haystacks, hares and pheasants’ – Larkin constructs a series of moving rural images that contrast to the earlier industrial descriptions of ‘workmen at dawn’. The sibilance on ‘haystacks, hares’ increases the rhythm of the poem and represents the movement of the journey of the train.

As well as this, the constant and repetitive use of ‘and’ in this stanza creates a feeling of the images continuing forever, without stopping. This is further emphasised by the fact that the poem is all one sentence that is not end-stopped until the final stanza, resulting in the feeling of building tension and pressure.

In the last two lines, Larkin further explores the beauty of the countryside. He creates a sense of the fields opening up with ‘the widening river’ and its ‘slow presence’ along with the ‘piled gold clouds’, gives a feeling of dignity and a suggestion of heaven, while the lengthened assonance slows the pace of the meter, further adding to this peaceful atmosphere.

Larkin’s transition from the rural area shown in stanza one, to images of urban activity in stanza two come as a shock. The ‘domes and statues, spires and cranes’ creates a sense of bustle and closeness in the town, which contrasts to the beauty of the ‘shining gull-marked mud’ previously described. The word ‘cluster’ is welcoming, giving the sense of intimacy and an impression of everything being pulled together in a rich concentration. This idea is taken further with the introduction of ‘grain-scattered streets’ where there is a feeling of abundance. However, Larkin quickly explodes this sensation with the introduction of more contemporary buildings with ‘plate-glass swing doors’, creating the feeling that the town is modernising and on the axis of change. At this point we start to see parallels with other poems in The Whitsun Weddings. In both ‘The Whitsun Weddings’ and in ‘Sunny Prestatyn’, for example, he condemns the nature of commercialisation.

“Parodies of fashion” and “nylon gloves and jewellery substitutes”, from ‘The Whitsun Weddings’, criticises the nature of consumerism and parallels Larkin’s words in ‘Here’. We get the impression that Larkin does not like the advancement and change occurring in the town. The phrase ‘flat faced trolleys’ seems blunt and unappealing, while ‘raw estates’ suggests something unfinished, without polish and out of place. By listing products, Larkin implies that consumerism is addictive; ‘cheap suits, red kitchen-ware, sharp shoes, iced lollies, electric mixers, toasters, washers, driers-‘, creates a sense of the products building up. By using commas, instead of ‘and’, Larkin enhances the meter of the poem to give a staccato effect and a build in tension. He does this to emphasise the consumer’s obsession with material goods and enhances this affect by shortening the length of syllables in each word as the list progresses.

Reflecting his ideas in ‘The Whitsun Weddings’ – where he describes the reverse journey to ‘Here’, travelling fro London to Hull – Larkin further denounces consumerism with the callous words in stanza three, ‘a cut-price crowd, urban yet simple’. This relatively dismissive tone relates back to the earlier images of ‘raw estates’ giving the impression that the people living in these urban areas are not sophisticated. The phrase ‘cut-price crowd’ is made up of hard, harsh sounds, but this is contrasted by the following words, ‘yet simple’, which has an affectionate tone for the uncomplicated people.

Following this, the word ‘dwelling’ appears comfy and suggests affection for the inhabitants, which reminds us of the warmth Larkin shows towards the earl and countess, in ‘Arundel Tomb’. We get a sense of the town spreading out and growing with the ‘mortgaged half-build edges’ and the ‘isolate villages’, showing that consumerism is engulfing the entire area. This is taken further with the words ‘where removed lives/loneliness clarifies’ which is split across the two stanzas and finally end-stops the 27 line sentence. Through this separation, Larkin uses enjambment to draw our attention to each word, therefore, showing the shift of perspective and pace. The word ‘clarifies’ strips away any confusion or doubts, demonstrating how unblemished the rural areas are.

By containing the first three stanzas within one sentence, Larkin creates a sensation of the reader travelling with him on the train. This long sentence juxtaposes the sudden short, monosyllabic sentence in the final stanza – ‘here silence stands like heat’. The long vowel sounds in this sentence create a sense of peace and freedom. This contrast in sentence length is symbolic of the journey, which is enhanced by the use of iambic pentameter throughout the poem. For the first three stanzas, the pentameter is flawless, adding to the sense of constant and rhythmic movement. However, in the last stanza, it is more erratic, lines like “luminously peopled air ascends” fall a few syllables short of the constant rhythm throughout the rest of the poem, showing that Larkin is a little unsettled.

The final stanza gives the reader a shift in tone, from fast paced, to slow and reflective, through twists of syntax. This reminds us of the final sentences in “Mr Bleaney” – ‘should make him pretty sure he warranted no better’ where the tone is also changed suddenly. In this stanza, the poem becomes more abstract and repetition of ‘here’ slows the rhythm down, giving significance to the moment. ‘Luminously-peopled air’ is mysterious and suggestive, taking us away from the brilliantly captured images earlier in the poem towards a vague and suggestive tone.

Alongside this, use of words such as ‘unnoticed’, ‘hidden’ and ‘neglected’ stresses the absence of people and creates a sense of nature being unwatched. ‘Hidden weeds’ gives the impression that they are private, which contrasts to the earlier images of busy consumerism. The final line is particularly poignant, ‘here is unfenced existence’, stating Larkin’s main message that even when we die, nature will still be there. Similar to in ‘Dockery and Son’, Larkin suggests his terror of death and feeling of dread at descending into oblivion when life ends.

‘Here’, reflects Larkin’s main message throughout The Whitsun Weddings of disenchantment with industrial advancement and the age of consumerism. By using long sentences and enjambment throughout the poem, Larkin creates a sense of building tension and alongside this, much like his other poems in this collection, ‘Here’ moves from physical ideas to the abstract. This results in an overall message echoing his views towards life and society. 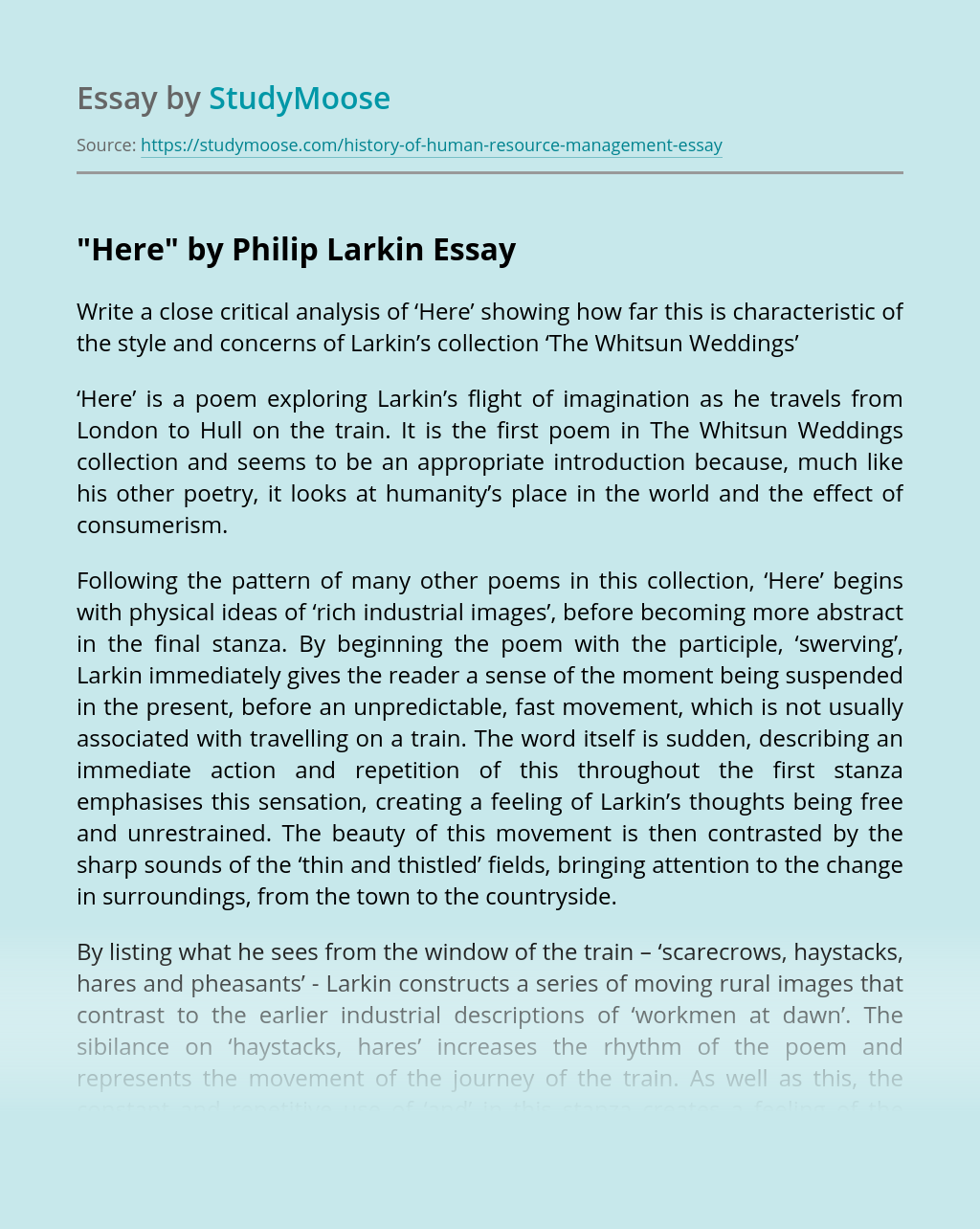 Turn in your highest-quality paper
Get a qualified writer to help you with
“ “Here” by Philip Larkin ”
Get high-quality paper
Helping students since 2015
Stay Safe, Stay Original