Magic played an important part in the treatment of dental ills, and people of early ages had odd beliefs concerning teeth. The Egyptians believed that the mouse was under the direct protection of the sun, therefore if one had a toothache the split body of a warm mouse was applied to the affected side. In India the cusped of Buddha was enshrined in a famous temple (at Kandi) and prayed to in fertility rites. Prayers were offered up to saints for the relief of pain.

Don't use plagiarized sources. Get your custom essay on
“ History of Dentistry ”
Get custom paper
NEW! smart matching with writer

St. Apollonia of Alexandria, 249 A.D., was one such saint. She is now the Patron Saint of Dentistry.

The first known dentist was an Egyptian named Hesi-Re (3000 B.C.). He was the chief dentist to the Pharaohs. He was also a physician, indicating an association between medicine and dentistry. In the 5th century B.C. Herodatus, a historian, described the medical art in Egypt: “The art of medicine is distributed thus: Each physician is a physician of one disease and no more; and the whole country is full of physicians, for some profess themselves to be physicians of the eyes, others of the head, others of the teeth, others of affections of the stomach, and others of more obscure ailments”.

Dentistry today is somewhat specialized. The eight specialties are as follows:

The first evidence of a surgical operation was found in Egypt. A mandible with two perforations just below the root of the first molar indicated the establishment of drainage of an abscessed tooth.

The splinting of teeth also was practiced by Egyptians; evidence by a specimen from Cizeh, 2500 B.C. It shows two molars fastened with heavy gold wire.

The Chinese were known to have treated dental ills with knife, cautery, and acupuncture, a technique whereby they punctured different areas of the body with a needle. There is no evidence of mechanical dentistry at that time, 2700 B.C., however. Marco Polo stated that the Chinese did cover teeth with thin gold leafs only as decorations, 1280 A.D. The earliest practice of the prosthetic arts was among the ancient Phoenicians circa 500 B.C. Hammarabi, ruler of all lower Meso-potamia (1760 B.C.), established a state controlled economy in which fees charged by physicians were set. His low code contained two paragraphs dealing with teeth:

“If a person knocks out the teeth of an equal, his teeth shall be knocked out.”

“If he knocks out the tooth of a freed slave, he shall pay one third of a mine.”

Teeth were knocked out as a form of punishment among these early people.

II. The Greeks, Etruscans and Romans

The contribution of the Greeks was mostly on the medical side. The ancient Greek physician, Aesculapius – 1250 B.C. – gained great frame for medical knowledge and skill. In time he was deified. Apollo was listed as his father. Aesculapius originated the art of bandaging and use of purgatives. He also advocated cleaning of teeth and extractions.

Hippocrates (500 B.C.) was supposed to be a descendant of Aesculapius. Hippocrates became famous both as practitioner and writer on medical subjects. He did not believe in magic. He stressed nature’s role in healing. Hippocrates raised the art of medicine to a high level. Also in one of his texts (Peri-Arthron) he devoted 32 paragraphs to the dentition. He appreciated the importance of teeth. He accurately described the technique for reducing a fracture of the jaw and also for replacing a dislocated mandible.

He was familiar with extraction forceps for this is mentioned in one of his writings. Aristotle – 384 B.C. – who follows Hippocrates, accurately described extraction forceps and in his book De Partibus Animal Culum devoted a complete chapter to the teeth. He also stated figs and soft sweets produce decay. He called it a putrefactive process instead of fermentative.

Etruscans (100 – 400 B.C.) in the hills of Central Italy made the greatest contribution in restorative dentistry. In Italian museums there are numerous specimens of crowns and bridges which were the equal of many made in Europe and America up until 1870 when the dental engine was invented. A very unusual specimen is a bridge constructed about 2500 years ago. This consists of several gold bands fastened to natural teeth and supporting three artificial teeth, two of which are made from a calf’s tooth grooved in the center to appear like two central incisors. Etruscan art, seen at its best in Florence, reflects some oriental influence but essentially it is their own. Conquered in 309 B.C., they were absorbed by the Roman Empire.

VII. Founding of Universities and Introduction of Dental Texts

Around 1300 universities like those at Paris, Oxford and Bologna were founded and important books made their appearance. One such text, Chirurgia Magna, was written by the famous French surgeon Guy de Chauliac in 1386. In this test he devoted some space to pathology and therapeutics of the teeth. Chauliac was first to coin the term dentator and dentists. The English term dentist came from his original terms. Following Chauliac cam Giovanni de

Arcoli in 1400. His opinions and instruments were somewhat modern. His pelican for extraction of teeth was used for years and his root forceps could be used today. He advised good oral cleaning habits and to avoid hot and cold substances and sweet stuffs. He was first to mention filling teeth with gold.

The first woman dentist in England was a widow of Dr. Povey – 1719. When he died she took over his practice. The first woman dentist in the United States was Emeline Rupert Jones of Connecticut. She too, took over her husband’s practice after he died. In 1854, soon after they were married, she offered to assist him. He refused, stating that dentistry was no occupation for frail and clumsy fingers. Secretly she filled several hundred extracted teeth and demonstrated her skill to her husband. He then let her operate on a few of his patients. After his death, she took over and practiced for at least 50 years. She was accepted in both the Connecticut State Dental Society in 1893 and National Dental Association in 1914. The honor of being the first woman graduate dentist goes to Dr. Lucy Hobbs, 1865. She graduated from the Ohio Dental College.

So as you can see, the history of Dentistry, involving rigorous discoveries and improvements, has come a long way. Entering the dental field is an unpredictable journey within itself. 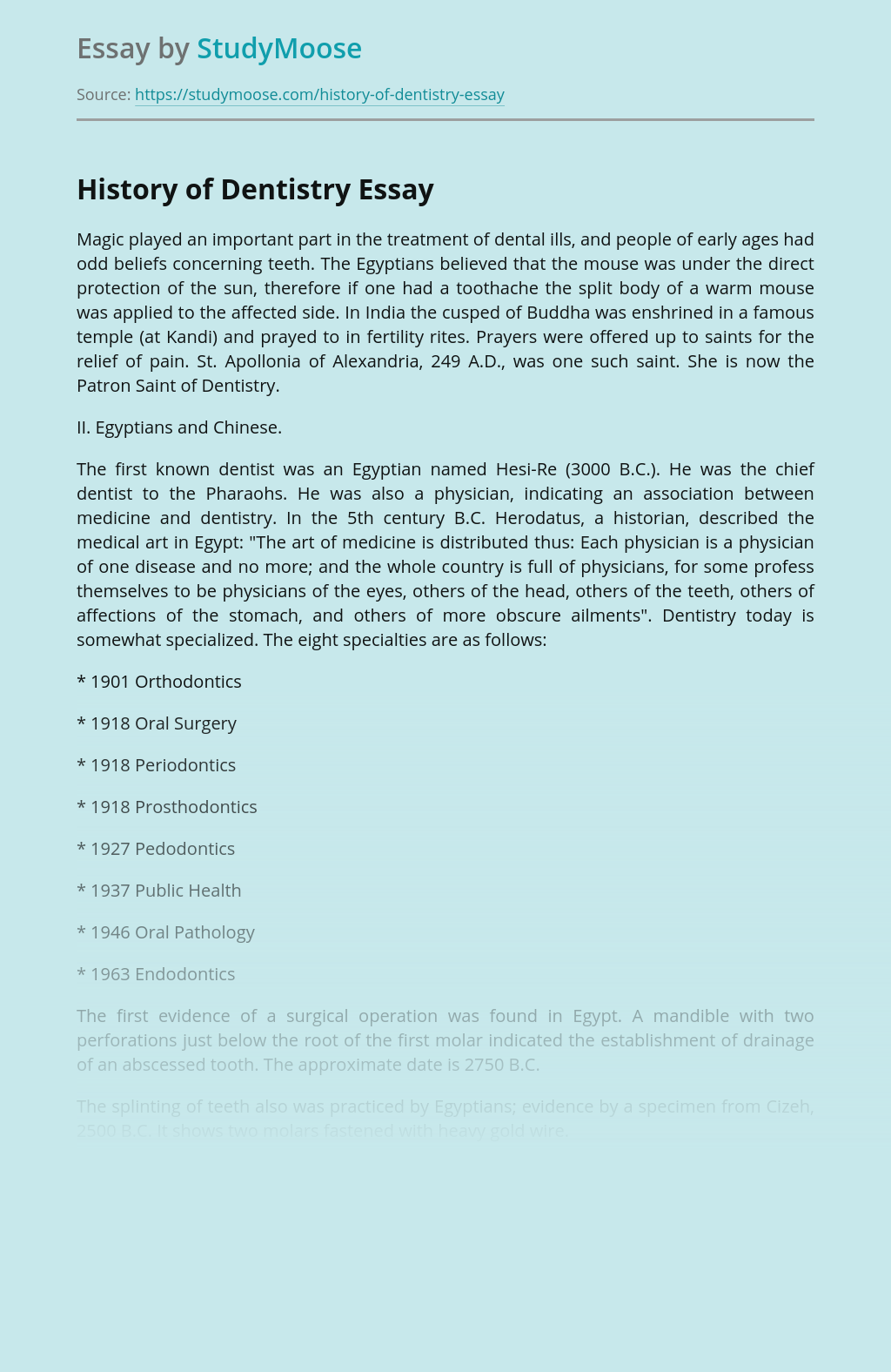