History and Medication of Bipolar Disorder

Nearly 2 million people suffer or are diagnosed with bipolar disorder; many of these people go untreated or suffer in silence due to fear of the unknown of what the disorder brings. Bipolar disorder is a disease that comes with a negative stigma; this has to do with the earlier link to schizophrenia. Many psychologists had linked the ‘manic-depressive’ disorder with schizophrenia, this according to the article from Burton (2012). In his article, he explains how from the early 1800 the “mania” disorder evolved to ‘manic-depressive’ disorder to what it is now called bipolar disorder.

Don't use plagiarized sources. Get your custom essay on
“ History and Medication of Bipolar Disorder ”
Get custom paper
NEW! smart matching with writer

This disorder is not only a stigma but it is reality for many, it is due to a chemical imbalance or genetic link that evolves into a chronic mental illness (Bressert, 2007). Treatments for bipolar patients vary depending on the symptoms of the patient and their psychotic episodes, but there is hope for people who suffer with bipolar disorder. Literature Review

History of Bipolar Disorder
Burton (2012) in his book, states that melancholia and mania are linked to as early as Ancient Greece, philosopher Aretaeus was able identify some type of disorder in which a person could go on with their day as a normal person; happy, feeling victorious but with a blink of an eye their mood will change into a dull, saddened mood.

Even though he had noted these behaviors, his ideas did not take popularity until modern day. Bipolar disorder was previously known as ‘manic-depressive disorder’ and it was more known to be part of schizophrenia. In the early 1960’s a well-known German psychologist named Emil Kraeplin studied the disorder in more detail.

With his studies, Kraeplin separated Bipolar disorder from schizophrenia and related it more with being part of ‘manic-depressive disorder’ (Burton, 2012) What is Bipolar Disorder?

According to J. Proudfoot & G. Parker (2009), they define Bipolar disorder as a chronic condition that is characterized by periods mania, depression and hypomania. These are defined as; mania, are episodes of frenzy, and rage opposite of depression. Hypomania is defined as a feeling of euphoria or irritable mood. The mood changes that come with this disorder can last from one day up to months (Grohl, 2014). For example, an episode can contain extreme highs that include tremendous levels of happiness, hyperactivity with the need to sleep. These manic episodes are followed with episodes of depression or vice versa, severe sadness, no interest in things or desire, feelings of hopelessness. These feelings can affect the lives of the person who suffers from this mental disease.

Living with Bipolar disease can be difficult; it can derail any future plans or just maintain a normal daily routine. If not treated, bipolar disorder can be detrimental for the person; manic episodes can cause conflicts within the family. These episodes can also result in hallucinations, hearing voices and even paranoia (Bressert, 2007). Bipolar disorder can be treated properly with medication if diagnosed early, if left untreated it can cause risky behaviors and or difficulty to survive in the outside world. Links to Bipolar Disorder

The neurochemical factors that may cause or may be top factors in the cause of bipolar disorder can be environmental or an imbalance in chemicals in the brain. The imbalance that occurs in the brain is caused by a dysfunction in the chemical messengers or neurotransmitters; norepinephrine, serotonin and others chemicals. Some of these factors can be triggered by psychological stress or social factors or stay dormant without any episodes. The environmental factors that can affect or trigger the disorder can vary from alcohol and drug abuse, to a major life event. Drug infused episodes can also happen, these are called medication-triggered mania; over-the-counter drugs, appetite suppressants, ecstasy, amphetamines, excessive to moderate levels of caffeine. If a person has a family history of bipolar disorder than stress, alcohol, drug abuse, and lack of sleep may speed up the disorder or an episode (Bressert, 2007) Treatments

During a study, (Lejeune, 2011), there was an evaluation of about 10,000 university students; as students are usually the ones that have more difficulty coping with this chronic disease. College can be very difficult time due to the fact that it contains many of the triggers it associated with the mania episodes; stress, lack of sleep, drugs and alcohol abuse. Some of the treatments used in this study include psychotherapy and psychoeducation. Psychotherapy is when an outside person, observer, will keep track of the activities of the students life’s. The observer would need to write critical details but also be non-judgmental or invasive. This would help point out patterns or triggers that can point out stressors. Psychoeducation is part of the psychotherapy; the observer helps analyze the data collected and sits with the student to see what changes need to be assessed to avoid an episode.

Medication can be an alternative for people with bipolar disorder; the risks and side effects are great when taking medications. Many undergraduate students decided not to take medication due to the effects it might have on their mood and school performance, graduate students decided to take the medication. Many mood stabilizers have severe side effects; for women they have concerns future pregnancies. If the student is taking a secondary medication, medications might have an adverse reaction with each other. Overall patients need to pay attention to medications and treatments; adjust to what better suits them and what treatment they feel more comfortable with (Lejeune, 2011) Conclusion

In conclusion, bipolar disorder is a chronic mental illness that can be assessed and controlled with medication, psychotherapy and group therapy. Many people who are diagnosed with this disorder can live normal, productive
lives; depending if the person can control their episodes by living a healthy and responsible lifestyle. Also, by avoiding stress triggers the mania or depressive episodes could be avoided. Maybe with constant therapy or group consultation, a person with this chronic disease can find support and understanding. But how do we diagnose people with bipolar disorder earlier? How can scientist study the brain to figure out if the disorder is linked to some type of deformity in the brain structure while in the developing phase in the mother’s womb?

History and Medication of Bipolar Disorder. (2016, Apr 01). Retrieved from https://studymoose.com/history-and-medication-of-bipolar-disorder-essay 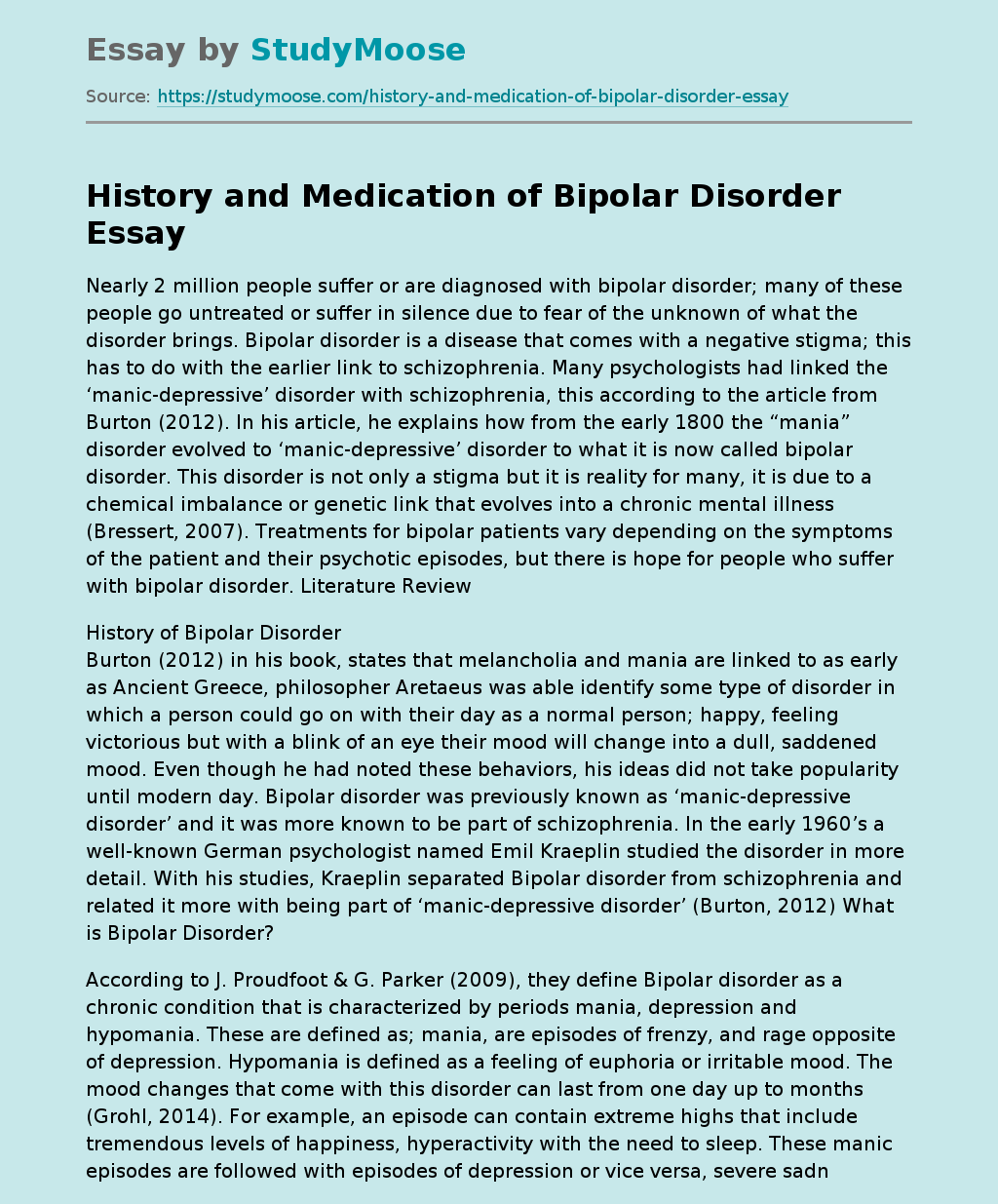