Introduction Paper presented at the Symposium on Self-Medication Consumer Aspects, Stockholm, Sweden. April 2-1. 1990 We have come to realize that self-medication using pharmaceutical products is the “rule” rather than the exception in medical care in the industrialized countries of Europe, North America and the Pacific.

This is certainly true if we include “non-compliance” with prescriptions in the definition of self-medication. Depending on how the concept is defined and the methodology used to measure it, it is estimated that self-medication constitutes 50-90% of all therapeutic interventions.

For some observers the high prevalence of self-medication is a reason for optimism. It demonstrates the continuous growth of consumers’ self-awareness and self-reliance and their escape from the dependency and aliention brought about by medicalization. It reflects, as Bezold remarks, “a new attitude toward health, including increased self-responsibility for health” [1]. Others cu:e less pleased. Some are worried about the biomedical effects of “irrational” self-medication. Others regard self-medication not as an escape from medicalization but rather as the appearance of a more subtle, less visible form of medicalization.

To them, self-medication constitutes self-imposed subjugation to medical technology, whereby the medical regime is rendered “invisible”.

The consumer no longer subjects himself to the directives of a physician whom he meets face to face, but to the more disguised persuasions of pharmaceutical and related industries. We tend to believe that the optimists and pessimists – as so often is the case- are both right. Self-medication is a deeply ambiguous phenomenon. Nevertheless, our pessimism gets the upper hand if we consider self-medication in developing countries. Let us be clear right from the start: self-medication may be very common in the industrialized world but is hardly equivalent to that in developing countries. Both in a quantitative and qualitative sense, self-medication in Sweden, for example, dwindles to nothing if we compare it to similar practices in any developing country. This may seem to be a provocative statement, especially if we take into account the fact that no solid data on this issue are available for developing countries. The patchy data from a few case studies are so overwhelming, however, that we need no longer doubt that self-medication in the Third World is of enormous magnitude and constitutes a grave problem.

In this paper, we can do little more than sketch the situation in very broad terms. It will be a depressing picture. There are many cheerful things to say about developing countries, even in the field of medicine {e.g., concerning herbal medicines). But any account of the use of Western pharmaceutical products is bound to be a sad one, particularly if it is examined through biomedical glasses. Hazardous self-medication Children The biomedical risks of self-medication are best illustrated by examining it in vulnerable groups such as children and pregnant women. With regard to the first category, a study by Hard on in a rural village in the Philippines revealed that antibiotics are routinely given in self-medication for non-severe childhood diarrhoea] illness, despite the fact that antibiotics are officially only available by prescription (2]. This practice is not in accordance with the established biomedical norm stipulating that acute childhood diarrhoea must be treated by oral rehydration therapy.

The widespread use of suboptimal dosages of antibiotics in the treatment of non-severe diarrhoea is a major public health threat. Not only do mothers mistakenly believe that they are helping their children get better, the widespread inappropriate use of antibiotics contributes to the development of resistant bacterial strains. Though not often publicized, resistance to antibiotics is one of the main problems facing curative medicine in developing countries [3]. In a more recent study in two urban Filipino communities [4] and in a comparative case study in Brazil [5], similar patterns of antibiotic misuse were reported. In fact for Bra- zil, Haak reported that between 50-66% of all medications given in self-care were used irrationally – in a biomedical sense – while onethird were potentially dangerous [5].

Preparations containing dipyrone, piperazine, penicillin ointments, local disinfectants containing mercury, products combining one or more antibiotics or antibiotics with steroids were the “dangerous” drugs most often used. All of these drugs have been banned in one or more countries. Other – less detailed – evaluations of the appropriateness of self-medication practices suggest that irrational and hazardous drug use is prevalent in the treatment of childhood disorders all over the world [6-11]. The result is that children die of preventable diseases, even in situations where a potential cure exists. Pregnant women With respect to the second vulnerable group, pregnant women, another – less acknowledged – self-medication problem can be identified: the use of powerful drugs to induce a menstruation if a woman thinks that she is pregnant. Quinine, high-dose hormonal drugs, aspirin and antibiotics are used by women as abortifacients, even though they are in fact not effective as such and may cause birth defects. The use of these drugs as abortifacients follows traditional practices of using herbal medicines for this purpose.

Women believe that Western drugs can terminate early pregnancy when the foetus is still vulnerable. The belief in the drugs’ effectiveness is reinforced by hot and cold principles in some societies where the drugs are classified as “hot”: “hot” substances are thought to cause substances to expand, liquify and leave the body. The use of Western pharmaceuticals to induce abortion has been reported in studies in Colombia [12), Ghana [13), India [14], Peru [15) and the Philippines [16]. It most likely occurs in many developing countries where women do not have access to safe abortion facilities. These examples are symptoms of a health. care context in which drug distribution is uncontrolled and in which people use drugs according to their own ideas concerning efficacy. To understand the practice of self-medication, we believe it is essential that both the economic-infrastructural and cultural-cognitive context of self-medication in developing countries be understood. It is these two types of context that make self-medication practices in developing countries so different from those in industrialized societies.

Economic-infrastructural context Economic factors impinging on the practice of self-medication operate both on the macro and micro levels. The gloomy economic situation in which most developing countries find themselves is one of the main causes of the defective functioning of their health services. In Cameroon, for example, van der Geest found that the public health system functioned badly [9]. Hospitals were frequently shortstaffed and lacked medicines and other essential items; when physicians were available, they could do little else than write prescriptions for medicines which were unavailable in the hospital and had to be bought elsewhere, sometimes far away.

The situation was worse for rural health centres many of which were without medicines (and sometimes personnel) several times per year. Although the government promised free health care, including free medicines, people often had to fend for t~emselv~s, bving drugs outside the health service and VISiting private practitioners, ~ome of whom ~~re legal and qualified, some illegal ?~t qualified and others both illegal and unqualified. The consequence for self-medication was that beside the non-functioning official system a relatively well-functioning alternative system had come into being in which medicines were su.ppiied and “prescribed”. Frustrated by the absence of medicines at the local health centre, people had no other choice than to self-medicate. They bought their own medicines at pharmacies, general provision stores, ma_rket stalls and kiosks alongside the road or obtamed them from itinerant drug vendors visiting their village. Developing countries, one could say o/nicallv, are a “paradise” for self-medicatiOn. One can get almost anything witJ:~ut h~ving to consult a phvsician. These med1cmes mclude both over-the-counter drugs and so-called prescription-only drugs.

The latter could perhaps be termed • “under-the-counter” although there is nothing secretive about their sale. Even in the pharmacies, which.~perate legally under the supervision of a qualified pharmac~t, prescription-only drugs can ~ bou~ht without a prescription. People acqurre therr knowledge about the use of these medicines from relatives, neighbours, sales people and old prescriptions, as we will see below I. •Recentlv Odebivi and Femi-Oyewo have reported on the correspanding situation in Nigeria. Self-).ledication with Prescription Drugs: A Pattern of Health Behaviour among Students in a Nigerian University.

Self medication. (2016, Apr 03). Retrieved from http://studymoose.com/self-medication-essay 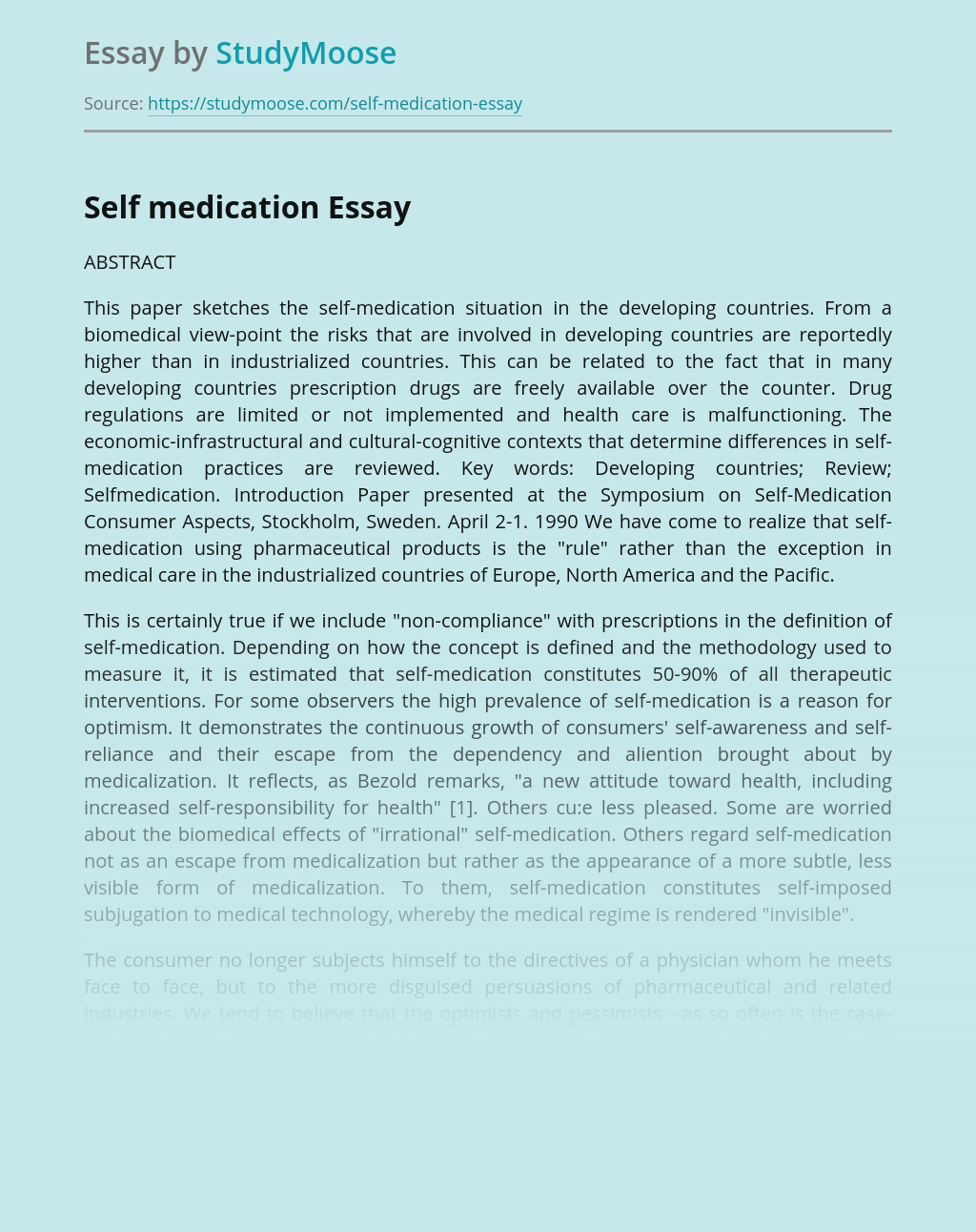