In the early morning hours of a 12-hour night shift, a nurse gives the patient an incorrect medication. The aspirin given was ordered for the patient in the next room. Medication errors are common in the hospital setting and especially by a nurse who is fatigued from working a 12-hour shift. In the situation described, should the nurse report the error or assume that the incident is not worth reporting since it was only aspirin? Surprisingly, according to Covell and Ritchie (2009) most medication errors are simply overlooked.

Don't use plagiarized sources. Get your custom essay on
“ Medication Errors: Causes and Problems Reporting ”
Get custom paper
NEW! smart matching with writer

“Nurses estimate that only between 25% and 63% of medication errors are actually reported” (p. 287).

This estimation may seem low to some; however, other researchers estimate that the voluntary reporting of medication errors may be even lower. In 2009, Jones and Treiber found that less than 5% of medication errors are reported. Medications are typically ordered by physicians, but it is ultimately the nurses’ responsibility to administer the correct medication. There are several steps in this process and unfortunately when one step is altered, a medication error can occur.

Even though preventative measures are taken, nurses are often still the cause of medication errors. Medication administration is a major intervention in nursing and when distracted or fatigued it is easy for simple mistakes to occur that normally would not have happened. The five rights are taught to all nurses at some point in their education as the basic technique to help reduce the occurrence of medication errors; however, many nurses fail to consistently and accurately utilize these measures. According to a study of 775 nurses conducted by Jones and Treiber (2010), 79% of participants believed that failure to follow the five rights of medication administration causes the majority of medication errors.

Other nurse-correlated causes identified by Jones and Treiber (2010) include distractions and interruptions of the nurse, high patient nurse ratios, and lack of proper education along with fatigue and exhaustion. Types of factors that are directly related to nurses are considered internal causes of medication errors. However, literature shows that a combination of internal and external variables within the nursing environment contribute to medication errors. Unfortunately, actions by nurses and failures to follow common nursing protocols directly place the responsibility of medication errors on the nursing profession.

Since many drugs look and sound similar, it is easy for nurses to confuse handwriting. An example involves the medications, Vioxx, Ziox, and Zyvox. These medications sound very similar; however, they are used for very different treatments. Confusion by the nurse in writing a verbal order or in reading the order related to one of these three medications could result in immense consequences. In a survey of 983 registered nurses, Brady et al. (2009) likewise concluded that poor handwriting ranks among the top three causes of medication errors.

In addition, there are many other factors that have been shown to contribute to medication errors including incomplete patient information, use of abbreviations, unavailable drug information, lack of appropriate packaging and labeling of meds, and environmental factors such as bad lighting. Understanding the cause of medication errors is an important step to decrease the occurrence and prevent future errors from occurring. Unfortunately, reporting of errors is still a large problem among the nursing profession.

Most nurses would agree that medication errors should be reported when they occur, yet medication errors are still underreported. A survey conducted by Jones and Treiber (2010) found that among nurses, “94% either strongly agreed or agreed that medication errors should be reported even when no harm resulted to the patient (p. 243).” Based on these findings, it is obvious that there is some inconsistency between actual occurrence and reporting. These findings also suggest that there may be barriers to reporting. Barriers to reporting can be broken down into four major groups according to research from both Koohestani and Baghcheghi (2009) and Covell and Ritchie (2009). The major groups are inadequate definition, fear, reporting process, and administrative process.

Surveys conducted by Covell and Ritchie (2009), determined that fear ranked as the highest barrier to reporting since “participants indicated that they were most fearful of adverse consequences from reporting medication errors” (p. 289). Findings by Koohestani and Baghcheghi’s (2009) regarding barriers to reporting by nursing students also demonstrated fear as the strongest perceived barrier. Their research indicated that among nursing students the fear of, “decreasing evaluation score and introducing educational problems” along with “instructor’s reprimand” ranked as the highest barriers (p. 70). Surprisingly, both studies ranked the process of reporting, time to fill out proper forms and time to contact physician, as having the least impact on reporting.

The large number of medication errors and the lack of reporting suggest a need for change among the nursing profession. According to research findings from a study conducted by Drach-Zachavy & Pud (2010), “Approximately every third patient, on average, is exposed to some sort of deviation from the regulations when receiving medication. Yet, when nurses were confronted with these findings, they tended to dismiss their gravity and argued that they were trivial in the hospital context” (p.801). One way to improve the problem of medication errors is to draw attention to the issue.

This can be done by increased reporting of errors among the nursing profession. However, due to the barriers of reporting described by nurses, establishing a concrete system to improve reporting has been difficult. Most nurses are aware that underreporting of medication errors does occur; however, they still fail to report. Education about proper reporting and awareness of the issue has been shown to increase reporting among nurses. Research shows that the major barrier to reporting medication errors is fear; therefore, reducing fear is a major component to increase reporting. Strategies to reduce fear include procedures to, “ensure that the processes used for reporting medication errors are respectful” (Covell & Ritchie, 2009, p. 295). It is also important for administrators and nursing managers to create a working environment conducive to reporting, one that encourages and supports reporting of errors (Koohestani & Baghcheghi, 2009, p. 73).

Another strategy to improve reporting deals with the process of reporting. Although the process of reporting was considered the lowest barrier to reporting, research still suggests that improving this process can lead to better reporting of outcomes. Brady et al. (2009) suggest that electronic reporting systems improve reporting. This type of system improves the reporting process by making it easier. There is significantly less paperwork required, and the fear associated with reporting is significantly reduced. In order to change the lack of reporting of medication errors, the perceived problems with reporting need to be improved. The first step in this improvement starts within the nursing profession. Recognizing that nurses play an active role in preventing and reporting medication errors will help to decrease the number of errors. However, the distinct role of nurses in reporting medications errors needs further discussion.

Importance to the Nursing Profession

The major role of nurses in the process of medication errors is first and foremost prevention. To help prevent errors, nurses must first recognize why medication errors occur and make an effort to eliminate the source. They must also strive to actively follow implemented guidelines and procedures. For example, consistently practicing the five of rights of medication administration has been shown to decrease the occurrence of errors. According to Brady et al. (2009) the major role of nurses is to, “take appropriate steps to develop and maintain competence in relation to all aspects of medication management” (p. 694).

Education plays a key role in maintaining nursing competence; therefore, it is imperative to remain up to date with current knowledge, evidence based practice, and skills. Once a medication error occurs, the most important role of the nurse is to report. Brady et al. (2009) concludes that, “reporting medication errors is pivotal in improving the medication management process” (p. 694). Reporting is critical for nurses because it is a legal and ethical concern in the nursing profession. Nurses must consistently report all errors and also encourage other health care professionals to report as well. Overall, the most important roles among nursing professionals are to administer medications safely and accurately, report errors consistently, and adhere to the American Nurses’ Association Code of Ethics.

According to the literature, medication errors do occur. Therefore, it is important to recognize causes so that steps can be made toward preventing medication errors. I believe that measures such as proper training and additional education are the best methods to preventing medication errors. It is also very important for nurses to actively practice safe medication administration by taking a “back to basics” approach and utilizing simple techniques such as the five rights. Furthermore, I believe that the best way to improve reporting is to reduce the fear surrounding reporting. One way to do this would be to initiate online reporting systems. In my future nursing practice, it will ultimately be my responsibility to administer the correct medication to patients. In order to provide patients with the best outcomes, it is important for nurses to understand the implications of medication errors.

Medication Errors: Causes and Problems Reporting. (2016, May 04). Retrieved from http://studymoose.com/medication-errors-causes-and-problems-reporting-essay 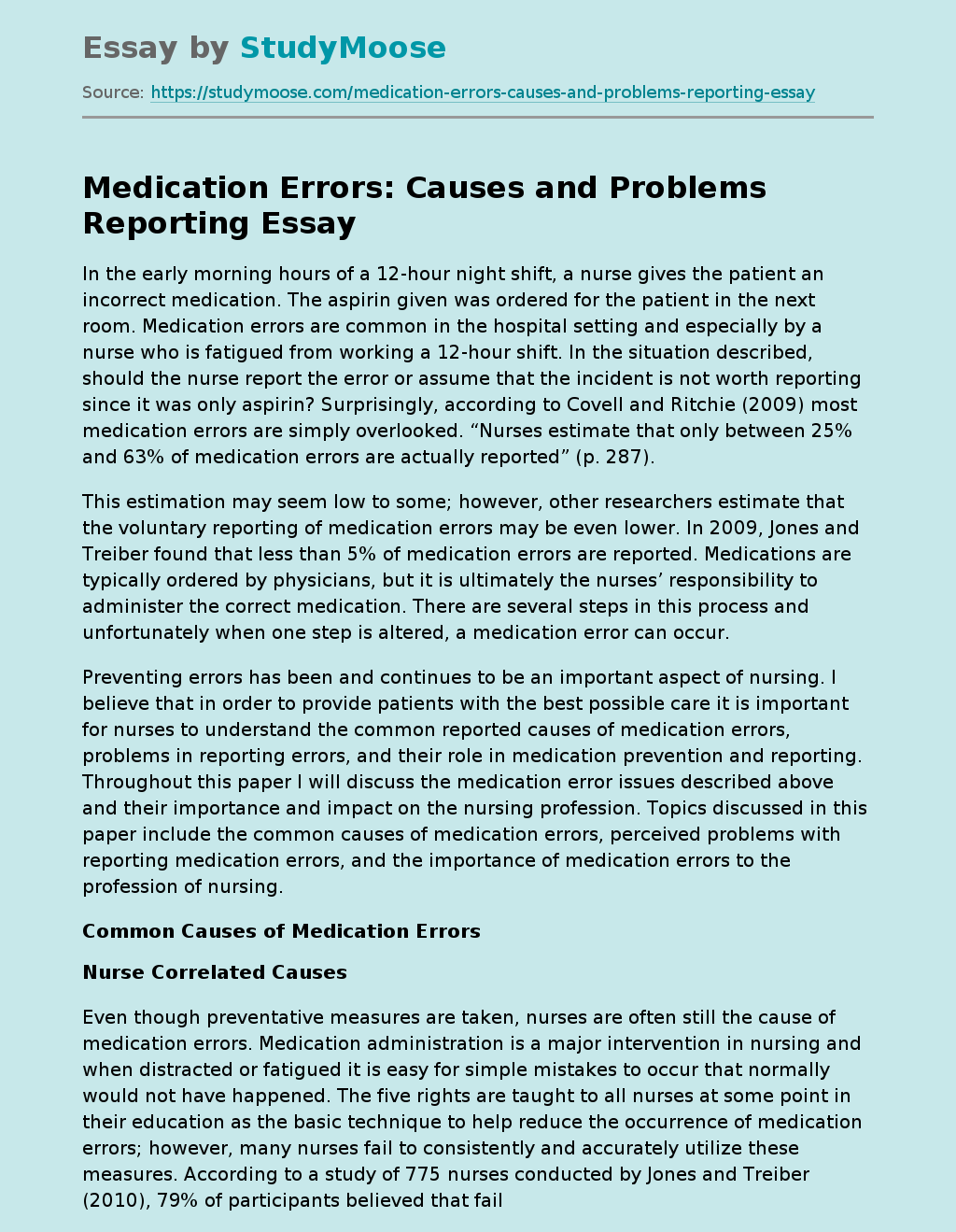