Jack and the Beanstalk: A Critical Reporting

Jack and the Beanstalk is a traditional fairytale passed down from generation to generation in different versions. Although there are many similarities between versions, it is clear that the justification of the actions of the main character, Jack, and the condemning nature of the supposed villain of the story, the giant or ogre, differ in weight across the different accounts. This report aims to get a clear understanding of who the real hero is in the story of Jack and the Beanstalk and to achieve a clear character analysis of the famous, or infamous, Jack.

Don't use plagiarized sources. Get your custom essay on
“ Jack and the Beanstalk: A Critical Reporting ”
Get custom paper
NEW! smart matching with writer

Although the different versions of Jack and the Beanstalk have many contrasting details, a majority of these hold a similar account of Jack as a trickster and as a boy with ambiguous morals. (Thompson, 1946) Across all versions, Jack is shown clearly as a thief in that he takes a combination of different things, a bag of gold coins, a goose that lays golden eggs, and a magical harp, that belong to the giant or ogre and bring these home to do with as he and his mother please.

He is also shown to be a child who is unable to follow his mother’s instructions.

He is told to sell their cow but he instead decides to trade it for a few magical beans; beans that he believes to be magical without reasonable proof. It is clear, therefore, that Jack is not the true hero of the story. When the story of Jack is considered in terms of its setting during the Middle Ages, it is clear that Jack does not possess the characteristics of a Medieval Hero.

During the Middle Ages, the class of the individual no longer mattered. Therefore a peasant could be considered a hero. This differed from early concepts of heroes which involved only those of noble birth.

This means that Jack might still qualify for heroism even given his low social status. However, an essential factor of Medieval Heroes is their morality. They must be obedient and loyal. They must be able to exemplify a clear code of good moral conduct. Even if the character isn’t perfectly conscientious, the reader’s perception must always be one of excellent moral standing. (Norman, 2003) On these merits, Jack fails to provide his audience with a reasonable basis for consideration of his heroic standing.

Rereading the story of Jack and the Beanstalk has brought the tale’s plot under a new light. What used to be a story of adventure has become a story of deception, disobedience, and irresponsibility. Understanding the immorality of Jack’s happy ending makes one question the lesson the story teaches children, to whom the tale is most often recounted. Also, one cannot help but wonder; if Jack is not the hero, an essential part of a fairytale then who is? Upon closer analysis of the different versions of Jack and the Beanstalk available, a common theme emerges.

Women hold a key role in the story. Jack’s mother is a single parent who oversees the household responsibilities. And the introduction of the giant’s castle almost always includes the presence of servant girl or of a giantess who warns Jack of the giant’s ill temper. It may be that the true hero in the story is, in fact, the giantess or the servant girl. It is she who warns Jack to stay away from the giant. It is also the same character who hides Jack away either in a stove or a cabinet when the giant returns.

When the giant belts out his famed “Fee fie fo fum, I smell the blood of an Englishman” speech, it is the servant girl or giantess who assures him it is a trick of his mind. It is the giantess or servant girl who saves Jack’s life. Although she works for the giant, her morals are clearly well-founded. She wishes Jack to be safe and tries to protect him. However, her efforts are repaid only with Jack’s thieving ways; something most often seen in the story of tragic heroes whose valor and kindness are often met by betrayal. The story of Jack and the Beanstalk may well be a story written from the point of view of the villain.

Considering the qualities of a hero and the qualities of the characters of Jack and the Beanstalk, it is clear that many previously accepted notions of the story are false and that deeper analysis is needed for a true understanding of the piece.

Jack and the Beanstalk: A Critical Reporting. (2017, Apr 12). Retrieved from http://studymoose.com/jack-and-the-beanstalk-a-critical-reporting-essay 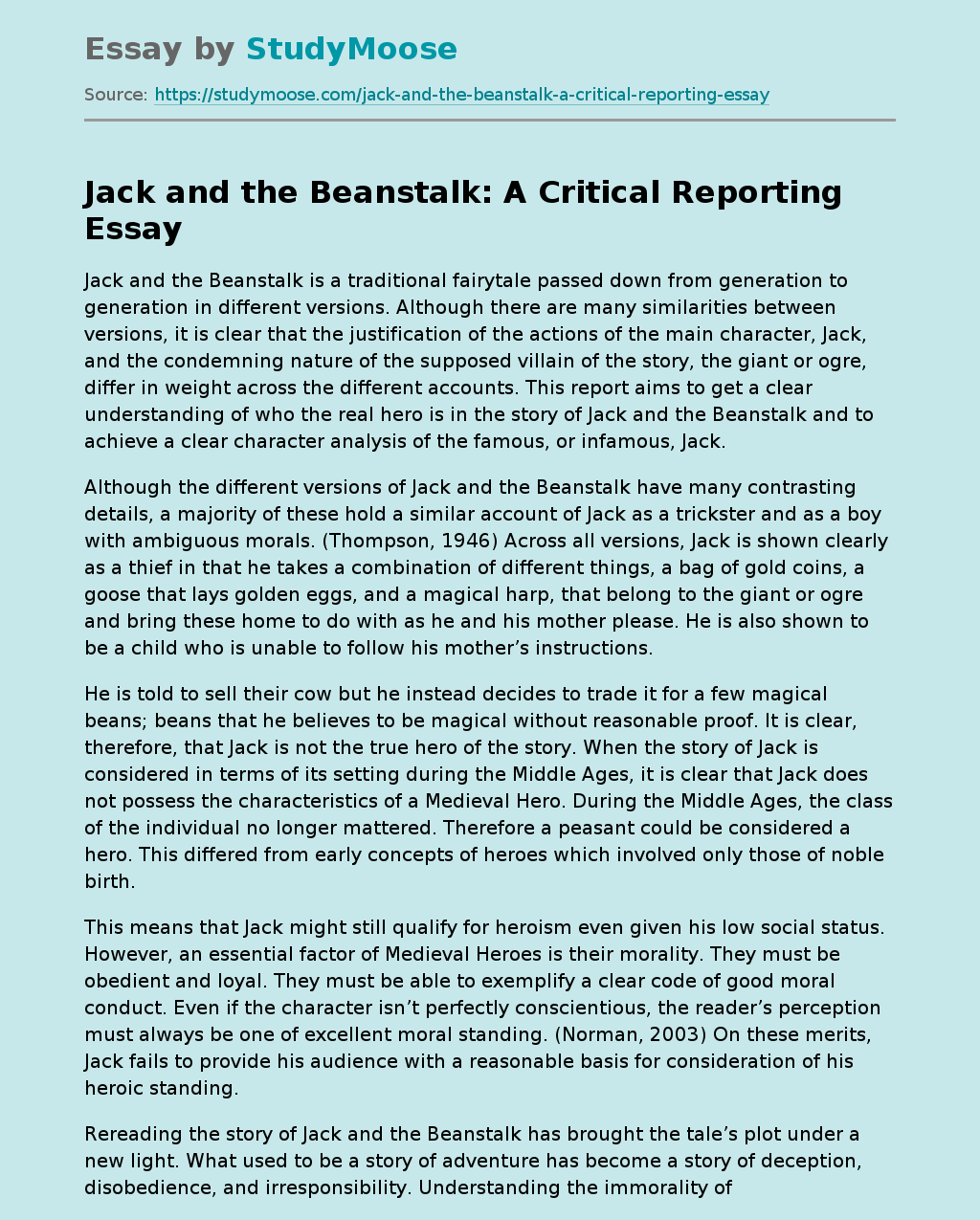