Hinduism and Buddhism in India

Mithuna pairs were also essential in the decoration of religious space, according to several Silpasastras. In the essay entitled “Erotic Sculptures of India” (1972), Y.Krishan relates to several medieval texts, namely Varaha Mihira’s Brihat Samhita (6th century A.D.), Agni Purana (10th century A.D.) and Silpa Praksha, which suggested the temple gates to be decorated as a sign of auspiciousness by mithuna couples. 8 Temples of Khajuraho are filled with amorous couples ‘ carvings. What makes one think about the portrayal of solitary sexually charged women and love-smitten couples is the play of the gaze; that is, from whose point of view and for whose visual pleasure.

Don't use plagiarized sources. Get your custom essay on
“ Hinduism and Buddhism in India ”
Get custom paper
NEW! smart matching with writer

In India, the medieval era saw an increase in tantric cult in both Hinduism and Buddhism. By the 10th-11th centuries AD, the cults of Kaula Kapalika were very strong across the nation. Kaulas used to worship in solitude the Devi or Shakti and indulged in five makaras: mamsa (flesh), matsya (fish), madya (wine), maithuna (sexual intercourse) and mudra (mystical poses).

Kapalikas used to be worshippers of Rudra Bhairav and were described in texts such as Sankara Vijaya of Anandgiri as those with bodies stained with “ashes from a funeral pyre,” strings of skulls around the neck, hair woven into a “matted braid,” and a skull on the right and a bell on the left. Although previous academics have argued that the maithuna carvings are nothing but the Kaula-Kapalikas hermits involved in Tantric rituals, scientists such as Devangana Desai and Y. Krishna have convincingly proved that neither these shrines were for Tantric deities, nor were the carvings a representation of tantric hermits involved in rati-krida (love-play).

However, even Krishna does not deny the tantric impact on the iconography of the maithuna carvings, even though several non-Tantric maithunas are also discovered on the temple walls of Khajuraho. After seeing the kinds of Khajuraho females in adequate detail, one comes to the thoughts about who these females were, if they were not part of the tantric ritual, as many academics suggest. These females may have been Devadasis and the carvings may represent daily operations in these women’s life.

In the medieval era, shrines themselves became a feudal organization, with a hierarchic scheme developing within the temple itself, between devadasis, musicians, garland makers etc. With increasing patronage coming from both the feudal and mercantile classes for the temples, the devadasi system thrived. Devadasis were females who devoted themselves in their life to temples at a very early age. A devadasi danced mainly in front of the temple gods so as to please them. The 10th-century Arab geographer, like Abu Zayd, defined them as “government females” who sold themselves for a set amount of money”. Some of these devadasis also sang and danced in the kings ‘ courts. How these women used to have descendants who continued their tradition and fed them once they lost their physical charms to stay a devadasi can be speculated. Devadasis presumably had physical relations with their royal patrons and even the priests in the temple. Thus kings and princes may have commissioned the shrines of Khajuraho to glorify the devadasis. Interestingly enough, there are several paintings showing princely male figures involved in social activities with females who dont appear to be yogis. Rather, they could also be seen as the representation of a coitus scene in the harem, where maids help to maintain the coital position. Having said that, to believe that the royal patrons planned to glorify the erotic actions between themselves and the courtesans in order to silence the Brahmanas ‘ disapproval, who temselves secretly indulged in sexual pleasures, perhaps a little too farfetched a reading. If the argument that the females portrayed in Khajuraho shrines were Devadasis is right, then it may also be suggested that depicting solitary females performing contorted arches, adorning themselves in the mirror or removing a thorn from their foot may also be seen as a marked departure in depicting something that was no longer factual. Perchance, they were an illustration of the erotic topics usually

Hinduism and Buddhism in India. (2019, Dec 02). Retrieved from https://studymoose.com/hinduism-and-buddhism-in-india-essay 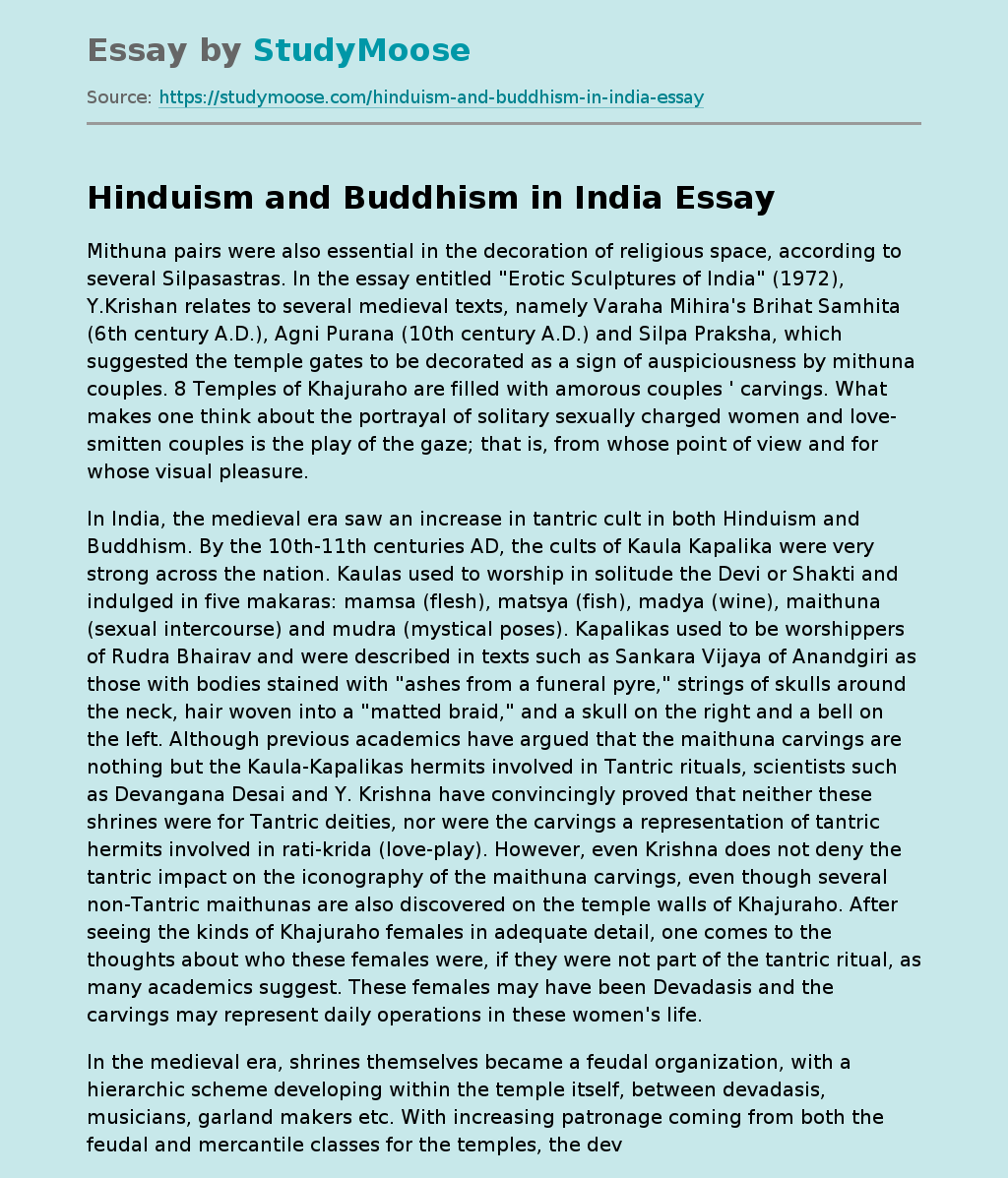