Enders Game, written by Orson Scott Card is a “classic novel of one boy’s destiny among the stars”. The representation of Ender as the typical hero partaking on a hero’s journey is shown through the language devices and the characterisation of Ender. Card presents the conventions of a traditional hero, namely qualities of bravery and wisdom, leadership, responsibility and the tragic or traditional weakness. Card explores the idea of a traditional hero’s weakness, through the character of Ender, who undergoes a hero’s journey, which demands that individual weaknesses are overcome, which mirrors Enders.

Peter would be proud of me”. Throughout Enders Game, Ender struggles through overcoming this weakness, which is a similar difficulty a typical hero goes through; this shows the strong link between Ender and a conventional hero.

“This sense of urgency creates the tension of Ender being the hero that they are relying on to save the world. Ender also being aware of this factor by saying “it’s what I was born for, isn’t it?

If I don’t go, why am I alive? ” The responsibility that Ender has no choice in accepting shows how essential and significant Ender is in the scheme of redeeming world peace among the buggers. Being depended on by others to accomplish something is the main reason why heroes must do their job; Ender like any other traditional heroes must carry out this role. Card displays the conventions of a hero, and explores the idea of heroes being an outcast, which is shown through Enders character.

From the very beginning there is a connection between Ender and isolation shown through the quote “Too willing to submerge himself in someone else’s will… So what do we do? Surround him with enemies all the time? ” From the very beginning of Enders Game and throughout the novel Ender has been deliberately isolated for the in order for Ender to became the leader and hero that is needed in the book. This concept is also suggested through the quote “Isolate him enough that he remains creative- otherwise he’ll adopt the system here and we’ll lose him.

At the same time, we need to make sure he keeps a strong ability to lead. ” In Enders game Ender has been deliberately isolated just enough for him to show his creativity in finding new solutions to problems but not too isolated to insure his social skills are still intact in order to achieve success in creating him as a leader. These qualities are what Ender must attain to be a hero. The brave qualities that Card illustrates Enders character as, display the true nature of a hero. Ender, although at a young age shows great intelligence and bravery in the way he cleverly and skilfully thinks situations through.

I think it’s impossible to really understand somebody, what they want, what they believe, and not love them the way they love themselves. And then, in that very moment when I love them…. I destroy them. ” This quote displays the creative and wise thoughts that enter Enders mind whilst solving a problem. “I have to win this now, and for all time, or I’ll fight it every day and it will get worse and worse. ” This citation from Enders game represents the courageous characteristic that Ender displays in standing up for himself. Although the decision that hero’s chose may be risky it is the wisest option.

The obstacles that Ender faces throughout his ‘hero’s journey’ reinforces his characterisation as a traditional hero. Card invokes this convention of the heroic genre by Ender displaying these identical qualities of a hero. Heroes are known for obtaining great intelligence or skill, which sets them apart from everyone making them valuable and unique. Ender in the world of mundane is described as a complex and advanced 6 years old. “ He always knew the answer, even when she thought he wasn’t paying attention. ” Also the quote “ he was the one who figured out ow to send messages” shows the intelligence and cleverness of Ender breaking and altering the system.

Enders intelligence is hinted in these quotes, which associate with a hero being extremely clever and more advanced than others. Card taking on the idea of Ender as the typical hero on his ‘heroes journey’ is shown in the obstacles and situation Ender faces where he shows the nature of a true hero. Orson Scott Card’s interpretation of Enders wise and brave characteristics, his sense of responsibility and his weakness is displayed throughout the novel which depicts the idea of Ender resembling a traditional hero. 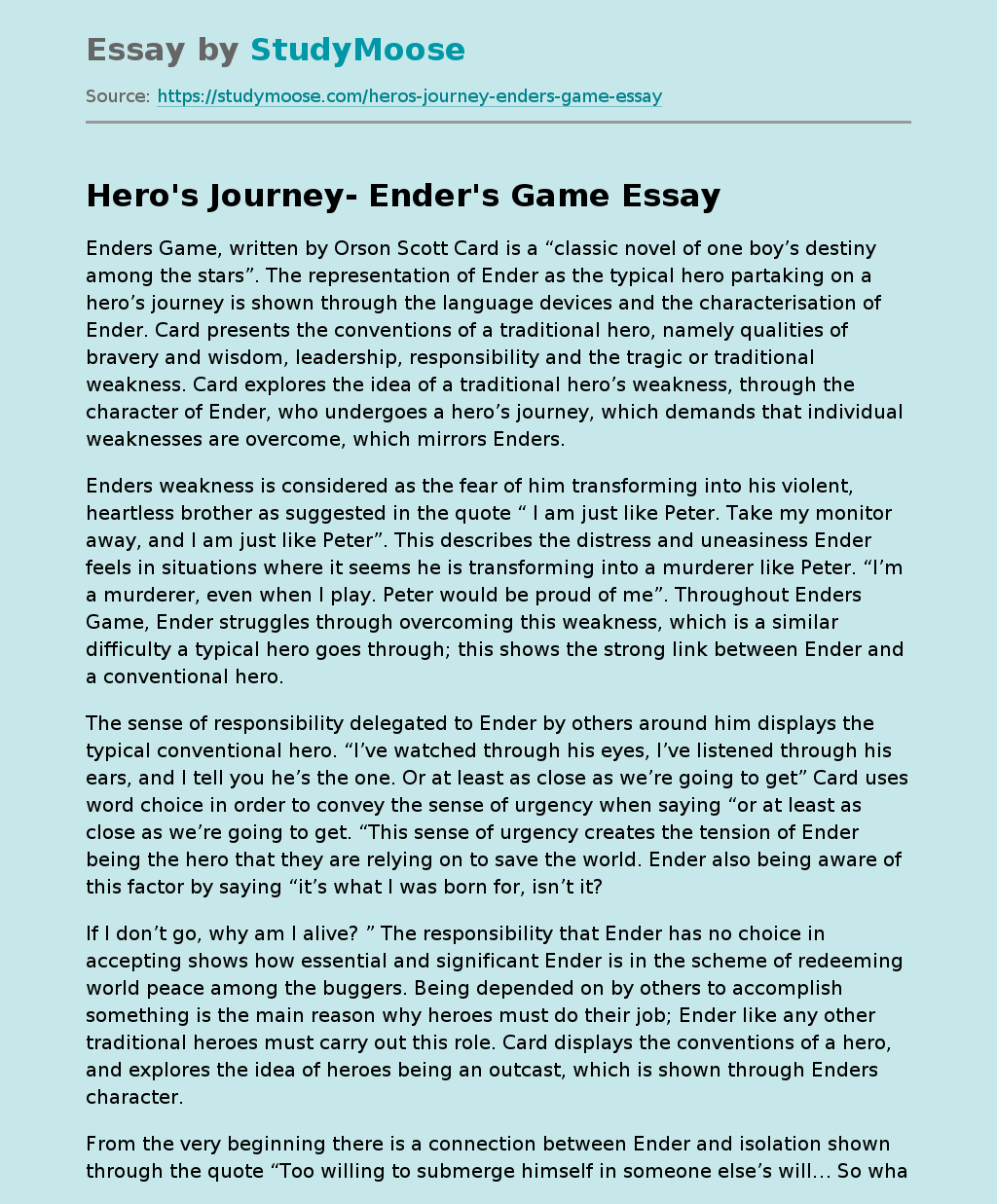