Ender represents the best picture of leadership. He is dedicated to learning, to doing well, is innovative, comprehends everything he sets his mind to, has strong self-awareness, has strong group dynamics-awareness, understands power dynamics, and is understanding and compassionate towards those he leads. He understands that he has to sometimes do things that he doesn’t want to, to have a point made or a mission accomplished.

He knows how to evaluate talent and abilities and knows how to adapt his strategy around the tools and people he has been handed.

Don't use plagiarized sources. Get your custom essay on
“ Leadership In Enders Game ”
Get custom paper
NEW! smart matching with writer

The flexibility to adapt and his ability to out-think his opponents makes him trustworthy and most important, people want to follow Ender. They want to him to lead and they want to follow him. Ender knows that the best strategy for defeating the Buggers is for him to train every one of his guys to think like a commander, so that in the course of battle, each individual is fully capable of being decisive and making key choices to be responsible for their side.

Ender had incredible awareness of every moment and how he quickly adapted to whatever came his way. He had the ability to asses each situation, weigh the pros and cons, and act only on what was necessary for his survival. He made sound and timely decisions and he also demonstrated that he was technically and tactfully proficient. He never acted on ego, vengeance, pride or greed. His motives were straight, even as he fought his own inner battles.

A lesson learned was that Building Loyalty was important when having, being a part of or leading a group of individuals. For example, when Ender became a commander of a green Army, he doesn’t immediately order them around. He develops relationships and respect amongst his soldiers.

He was insuring that he wasn’t a friend but more of a respected commander. Being able to Develop Flexibility and Teamwork Above All Else was also an important lesson. Despite the fact that Ender’s soldiers were overworked; the Dragon Army won every single situation that was thrown at them. Flexibility and independence helped the Dragon Army to succeed in face of impossible odds. Having particular friends was a lesson that took him far in some cases. Ender was an outcast but he managed to befriend Alai, Dink, Petra and Bean. They just happen to be the best of the best. These friendships don’t provide immediate benefits to Ender but these friends become invaluable during Command School. Buddy up with the best, you never know when you’ll work with them.

There are many lessons to take away from this book but there is also guidance as to what not to do. It’s important to learn from your mistakes as well as learn from others mistakes. For example, don’t think you’re all that. Many children at the Battle School resent Ender because he was the best. If Ender was the best, that means that these kids aren’t the best. A blow to the ego when all you were thinking was that you were the best. The true leaders, such as Dink and Petra, put their own egos aside and gave Ender appropriate respect. Don’t judge based on appearance alone.

Ender was small and young, Petra was a girl, and Bean was tiny and arrogant but all of them are exceptional. A true leader can see beyond the surface and see true potential. Don’t react emotionally. Doing so can burr a mission and make decisions selfish. Bonzo failed as a leader because he ran on his emotions. Bonzo made decisions based on emotions, not logic. That type of decision-making lead to his death. Ender functioned differently. He channeled his anger using logic. Good leaders can put their emotions aside when necessary. And lastly, don’t stop learning. There is always room for improvement no matter who you are. Ender continually matured as a leader, throughout the story.

This book is in the commandants reading list because it uses military mindset along with the important traits that the marine corps wants us to have instilled in ourselves as marines. The obvious would be the leadership characteristics that are possessed by the main character. Another would be the whole scenario of the school itself. Ender left home to enter a different world. Every marine has been through this. It’s an adjustment that we all have gone through and we have all learned these same lessons along the way weather we are aware that we have or not. 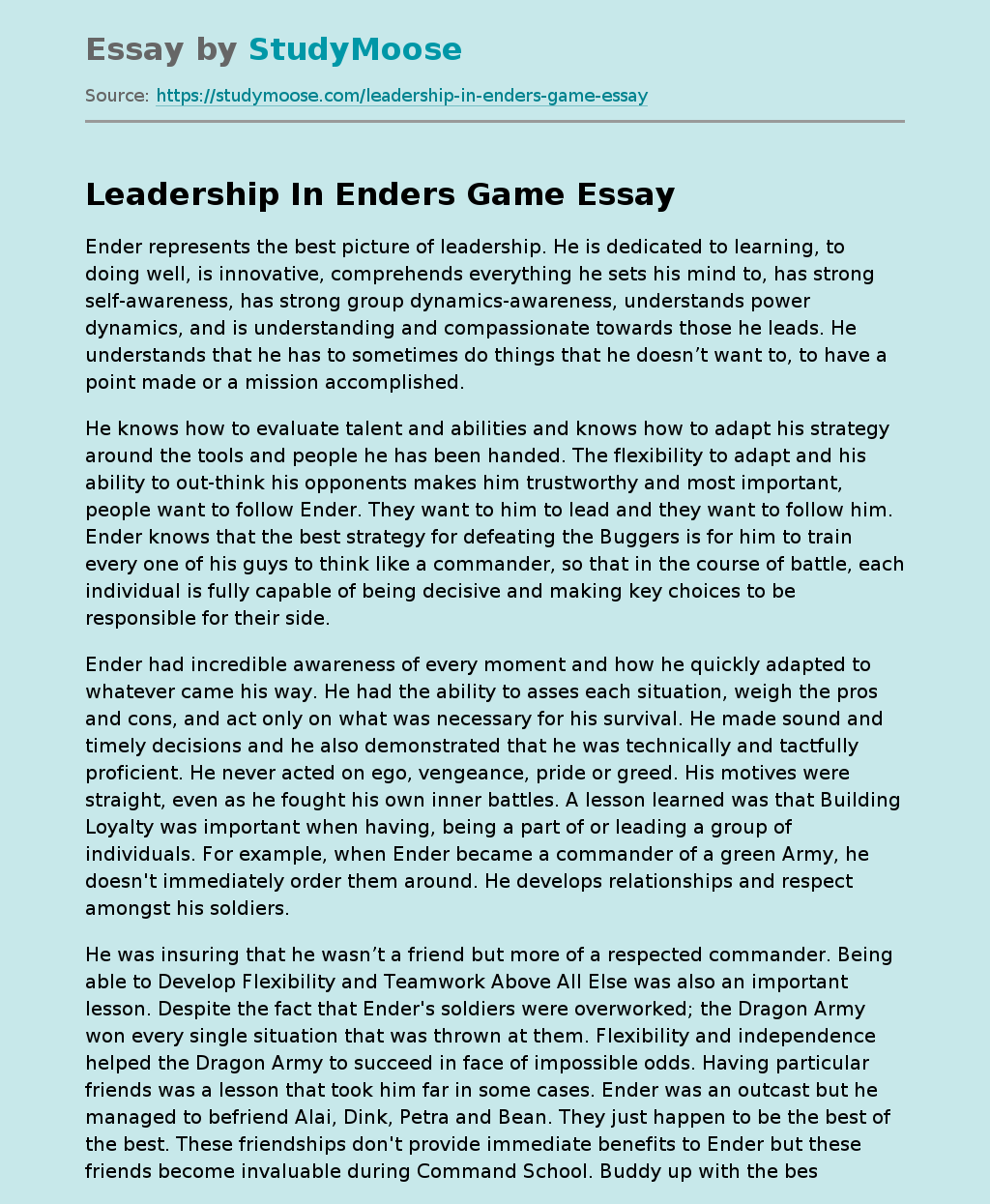